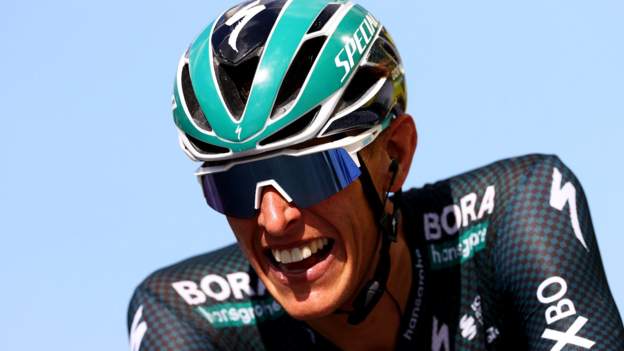 Nils Politt soloed to victory on stage 12 of the Tour de France as Tadej Pogacar retained the leader’s yellow jersey.

The German broke clear with 12km left on the 159.4km run to Nimes after being involved in a long-range 13-man breakaway.

Pogacar finished safely in the peloton behind Britain’s Mark Cavendish.

“It’s a dream to win a stage in the Tour de France. It’s the biggest win you can have,” Politt said.

On Friday the race travels 219.9km from Nimes to Carcassonne.

Politt’s victory came after his Bora-Hansgrohe team-mate and three-time world champion Peter Sagan was forced to withdraw prior to the start in Saint-Paul-Trois-Chateaux.

But while Sagan, who has won a record seven green jerseys at the Tour, is still feeling the effects of a crash with Caleb Ewan on stage three, Politt showed he was in excellent condition, a day after a punishing double ascent up Mont Ventoux.

He latched on to a strong group of riders containing current world champion Julian Alaphilippe and launched a superb late attack to ride away from Imanol Erviti and Harry Sweeny, who finished second and third.

“I felt good in the last few days, I was trying to do my best today but to come away with aa victory is unbelievable,” he added.

All the pre-stage talk had centred on Mark Cavendish with the flat parcours designed to favour the sprinters.

However, after a 10-minute delay to the start due to the wind, the conditions then contributed to a frenetic start as several early attacks split the peloton.

And it ensured that the Manx sprinter would have to wait for his opportunity to equal Eddy Merckx’s record of 34 stage wins.