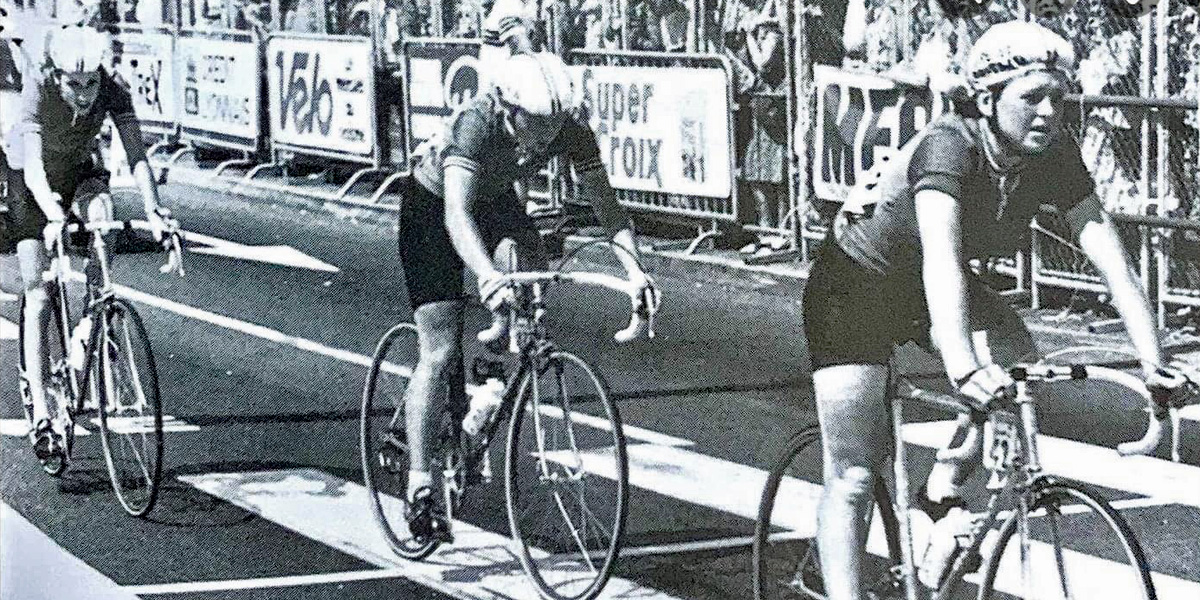 Tour rider interview: Paul Kilbourne has sent through another great article to Ed Hood. Back in 1984 the women’s peloton had an 18 stage Tour de France and young English girl, Louise Garbett finished in the white ‘best young riders’ jersey. Here is her story. 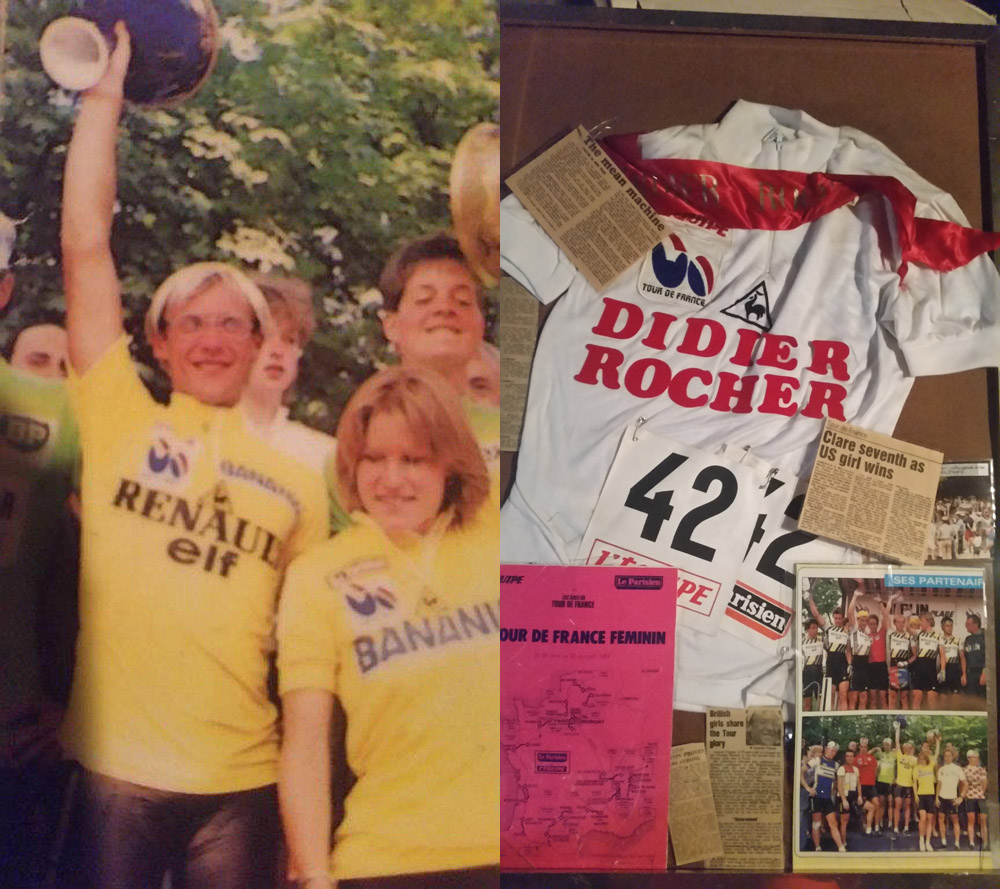 Our chum, Paul Kilbourne whose excellent piece about the legendary ANC team in the 80’s you’ll have read if you’re a PEZ regular has brought to our attention a little known piece of British – and Tour de France cycling history. . . 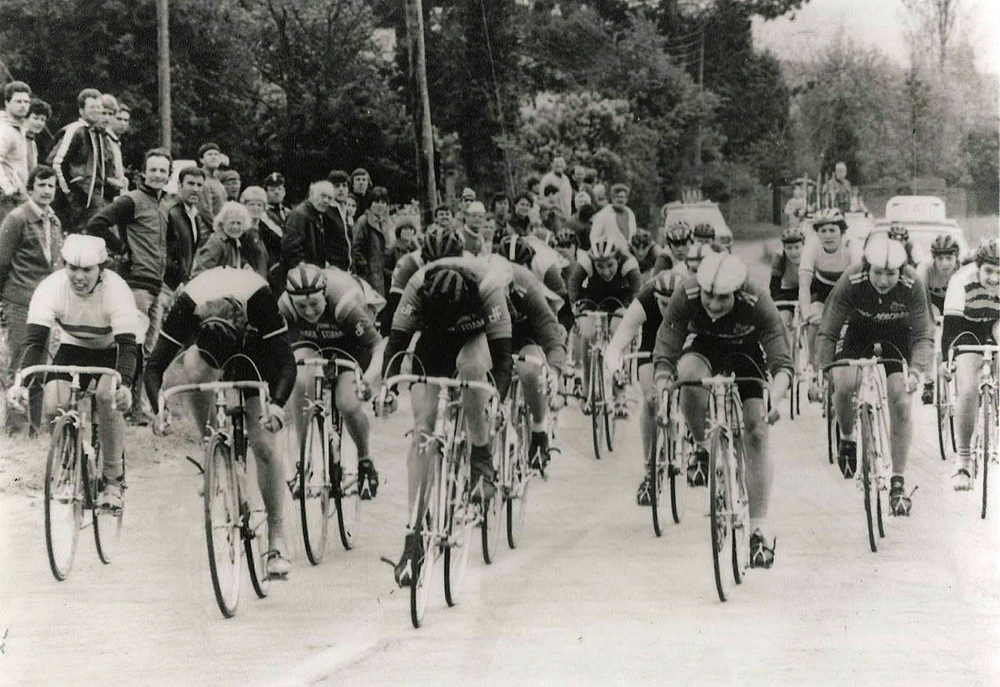 A just turned 19 years-old cyclist, finishing the biggest race in the world on the Champs- Élysées in Paris, and being escorted to a podium along with Laurent Fignon and Greg Lemond. That’s got to be very many teenage cyclists’ dream – but it actually happened. On 17 July 1984, after 18 Stages of the Tour de France Great Britain rider, Louise Garbett, mounted the podium to receive the overall White Jersey for the first Tour de France Feminin. The first ever female cyclist in the world to win that jersey. With a new Women’s Tour de France announced for 2022, Paul felt that this part of the history of international women’s racing was a story that ought to be told, and caught up with Louise, now Louise Moore. 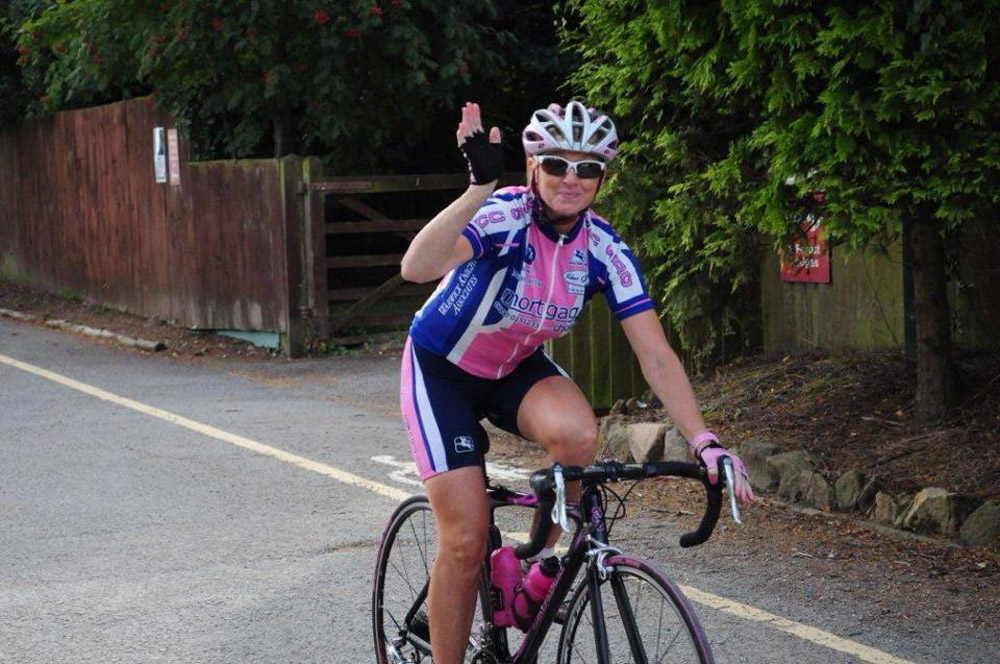 Paul Kilbourne: Tell me about that day you mounted the Tour podium please.
Louise Garbett: It was the final stage of the 18 which made up the race that year. The Tour Feminin preceded the men’s race every day, but starting further along the course. We had to make sure that we got to the finish in time, before the men’s race arrived. We pulled onto the Champs-Élysées strung out, feeling a mixture of excitement and relief. Pat Liggett, [Famous commentator Phil’s wife, ed.] who’d done a fabulous job of looking after us; massages, washing, an ear to talk to – everything, came straight up to me after the final sprint where I was seventh on the stage – I was fourth in the bunch sprint behind a break of three – and told me to go with her straight away to get cleaned up for the podium. I have to say, I didn’t really know what was happening. Thinking about it, there had been something going on for a day or two; extra encouragement to finish each stage, and especially to finish the last stage. I was determined to finish anyway, we’d been told that if we abandoned we had to find our own way back to GB! It became clear quickly though, that I had won something – in fact the White Jersey! I think that the management team didn’t want to put me under additional pressure, so had kept it under their hats for a couple of days.

Paul: There you are, on the podium, next to Fignon and Lemond, the American had won the men’s White Jersey.
Yes! It was all a bit of a blur, presentations, photos, speeches, it was a unique feeling, luckily I have some pictures to remind me that it was all real. 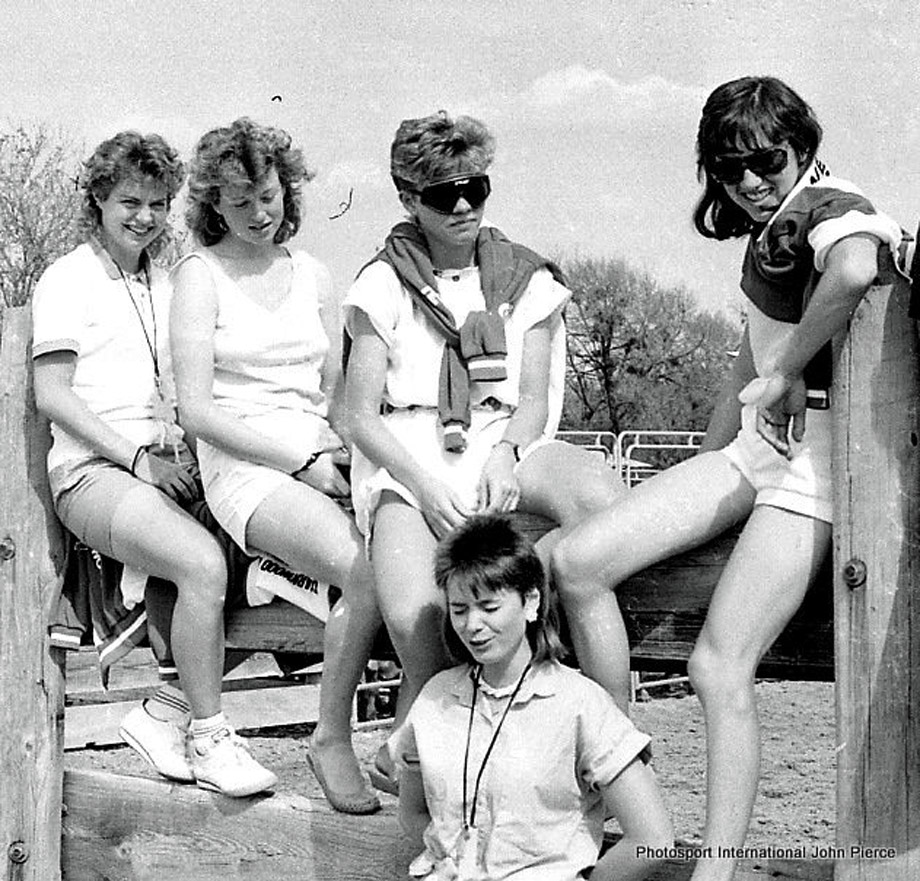 Paul: Tell me how you came to be at the first ever Tour Feminin.
That year, 1984, I’d had some invitations from the British Cycling Federation (BCF) to represent Great Britain. In particular, I rode Paris-Nice early season for the GB squad, and performed really well, achieving a second place. I guess that got the attention of the selectors. In May I got notification that I was short-listed for either the Olympics, or maybe the Tour. At the time it was indicated that the Olympics was more likely; so I trained for a one day, probably very fast, race. I was a sprinter, so I was keen to maximise my sprinting fitness. Then, a couple of weeks before the Tour I was told that it would be the Tour, not the Olympics. Apparently the BCF felt that I was too young for the Olympics – so they sent me to an 18 day stage race! I never did really understand the logic in that. 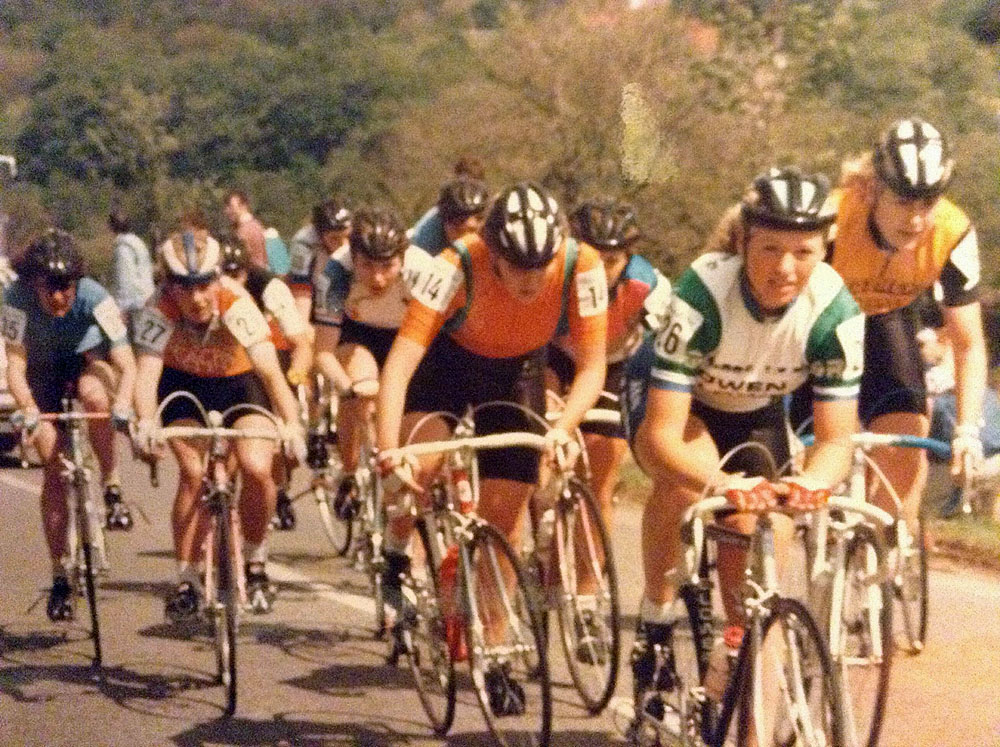 Paul: Did you have any special training camps, or get-togethers before travelling to the Tour?
No, in those days it was just meet the minibus at a set point, bring your bike, you’ll get a woolly jersey, a skinsuit and a hat; bring everything else you need. The Manager was Alec Taylor, and, as I’ve said, Pat Liggett was the masseur and carer. Luckily a friend lent me some nice wheels. 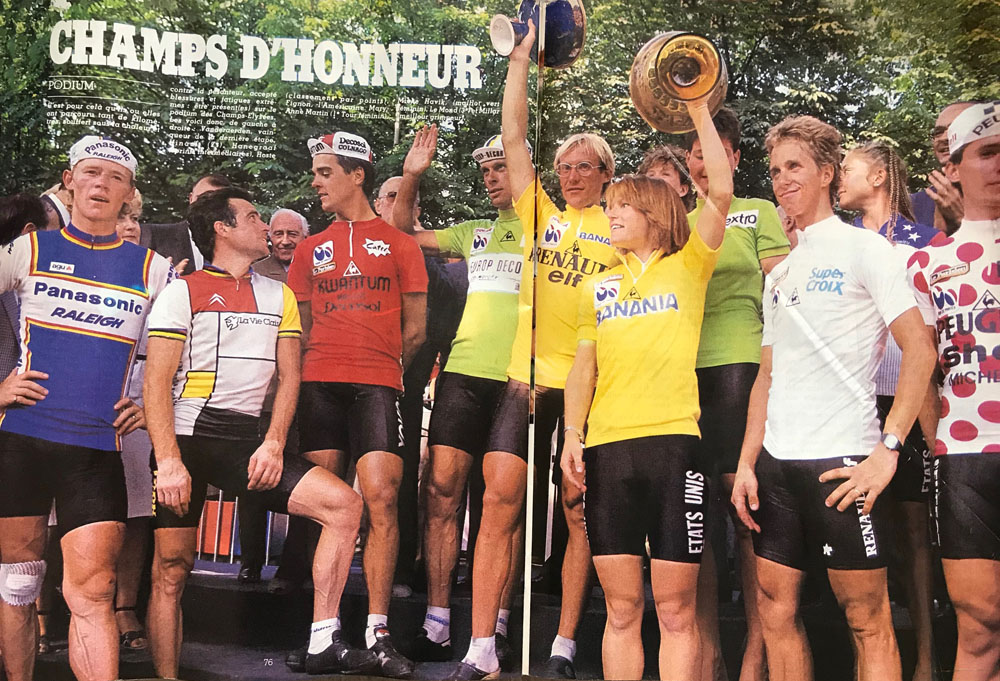 Paul: That sounds very “homespun” in contrast with what we might expect these days.
It was really. There were no development plans or BCF coaching as such. You either sunk or swam; luckily I swam. To be fair, there was no money for anything but the very basics within BCF in those days; it was before the Lottery Funding came along. It was pretty much make do with what there is. [A quote from a magazine cutting at the time said that one journalist had a bigger expenses budget for one week on the Tour than the whole GB women’s team had for three weeks, Paul.]

Paul: Who else was in the Team?
We had Clare Greenwood, Pauline Strong, Helen Edwards, Judith Painter and Helen Parritt – who unfortunately broke her collar bone on a stage. The other five of us finished The Tour into Paris. 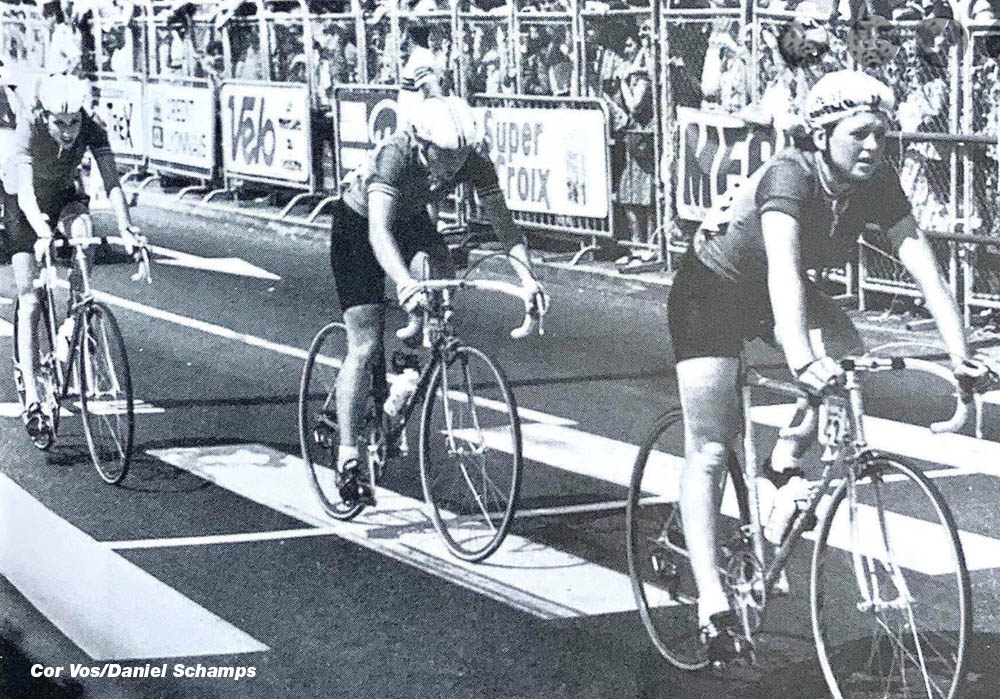 Paul: You said that you preceded the men?
Yes, we left the hotel, often the same hotel that the men were in, in the morning and the Tour provided transport to our start point along the way. We started following the whole pre-Tour cavalcade, and the great thing was we got all the crowds and support along the way. I’d never experienced that level of, well, stardom, before. We were mobbed for autographs and for pictures with people’s families. There was a pretty tight cut-off time, which was hard some days, especially in the mountains, when, as a sprinter, I was often on bottle duty. There were a few sticky ones I’ll admit! There were no easy days in the gruppetto, it was full gas every day – if we ended up too close to the men we would get pulled out. That’s a big pressure to be under. We all made it every day though, apart from when Helen broke her collar bone, but it could be a bit tight. I remember one mountain-top stage where there were showers rigged up in some old army tents. We almost didn’t make it out before the men; there were naked male riders everywhere! 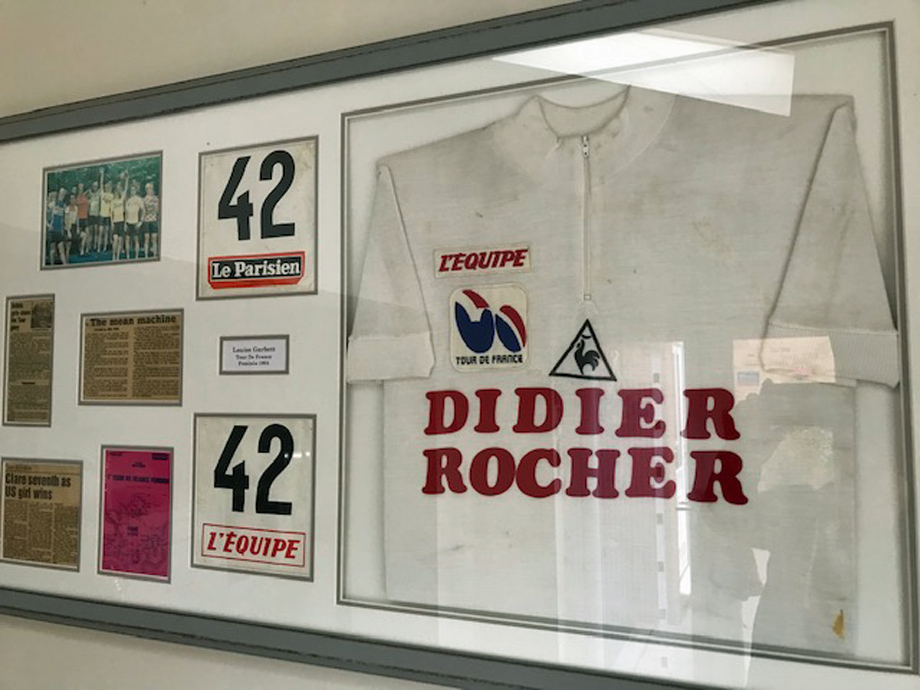 Paul: How were relations between you and the male riders, and the Tour organisation?
We were treated really well by everyone. I know that a couple of male riders weren’t keen on women racing, but they were all really polite and respectful. We never felt that we were any sort of second-best or a warm-up act at all. 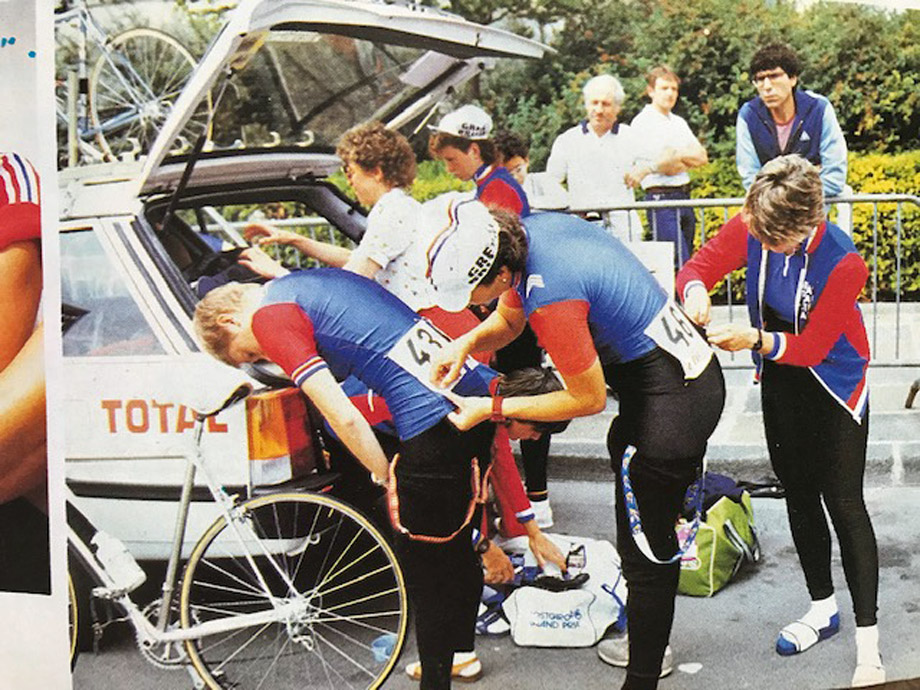 Paul: The 2022 Women’s Tour de France will be later in the calendar than the men’s race. What’s your view on that?
I think that we gained a lot of atmosphere and public support from being part of one big Tour de France. We added another dimension, and the locals and the fans had a good day watching both races. I wonder if it will feel quite the same for a standalone women’s Tour. I hope it will do, because I know how special it was. 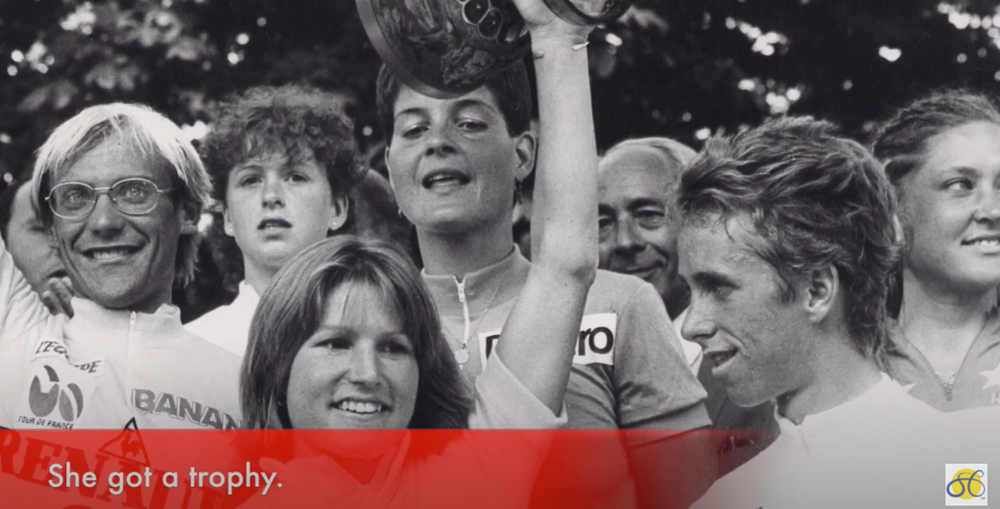 Paul: What was your worst day?
I’d be tempted to say any climbing day when I was having to go back for bottles. By today’s standards it all seems rather amateurish, with all the radios, soigneurs by the road and so on nowadays, but it was what it was, and what we were used to. One day I caught a plastic bag in my gear, and I really had to dig hard to get back after that. There was one day though, a mountain-top finish, where as I came in Pat Liggett told us to watch our bikes carefully, I think some had been stolen. I said; ‘They’re welcome to mine!’ Bizarrely that got reported in the press more than our success! Thinking back, three dope tests weren’t much fun either, especially when you’re dehydrated. 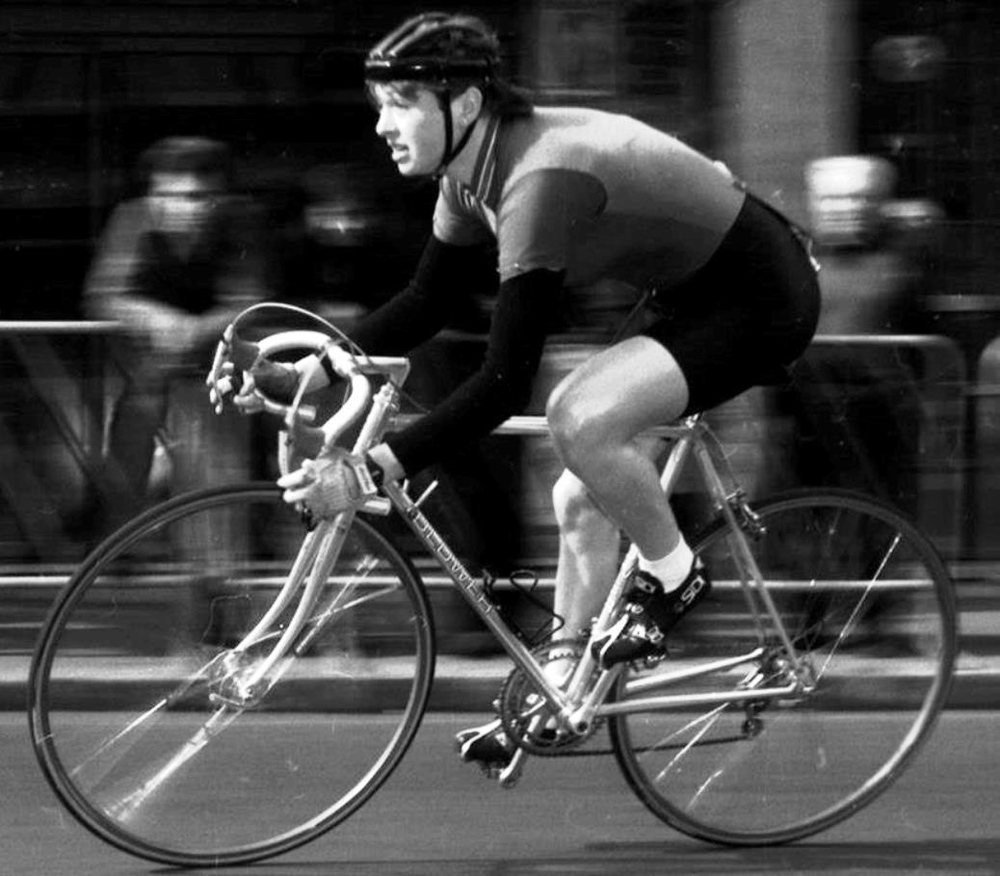 Paul: And the best day?
Obviously receiving the White Jersey, on the podium. And getting a kiss from Greg Lemond who received the Men’s white jersey. There were other times though as well, I especially remember a rest day when we had a hotel with a pool, and after a little ride we lounged by the pool, and had massages in the sun. Remember, I was only just 19, and apart from a school trip and a couple of short races I hadn’t been abroad much. Everything was a new experience. 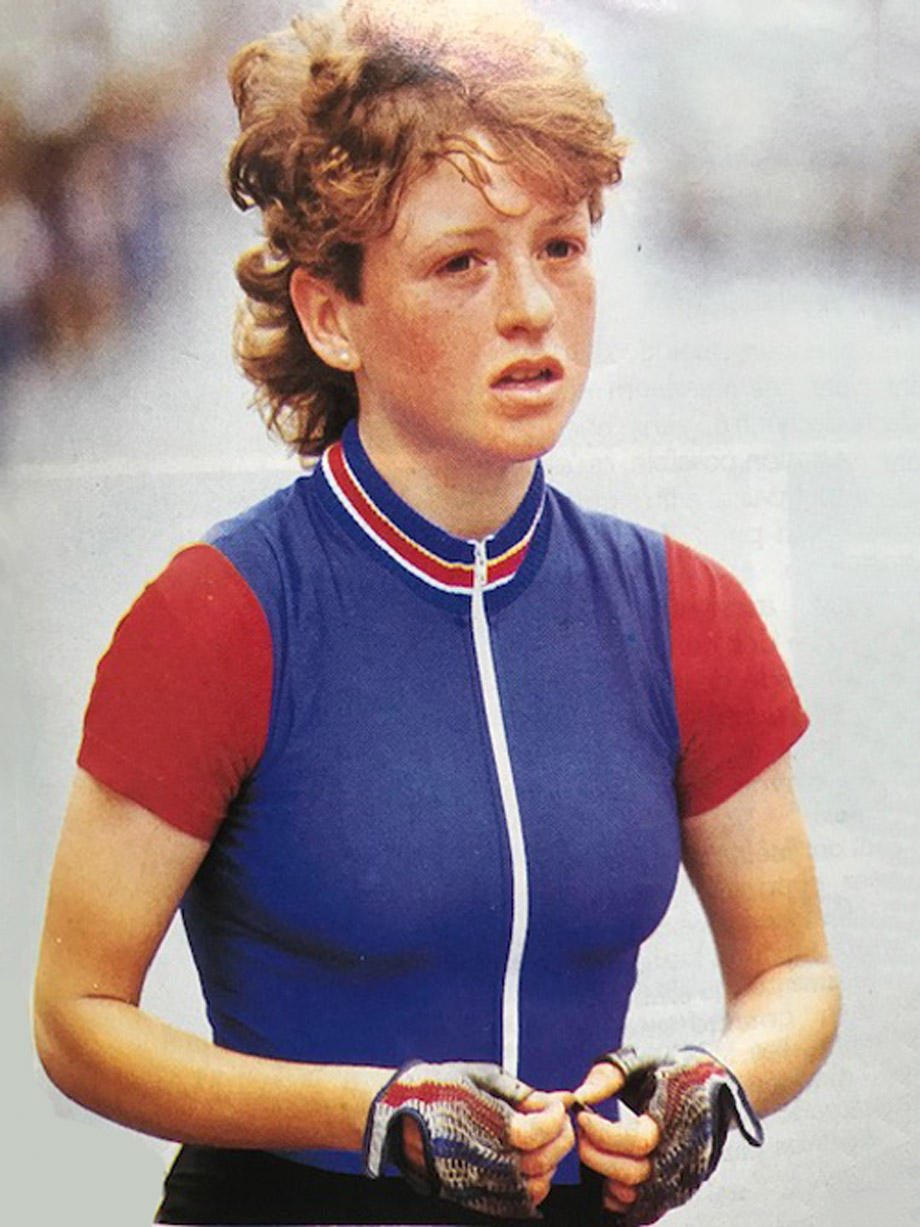 Paul: After all the excitement and success of the Tour, and your success, how did it feel to be home?
Apart from my family, and the local press, I don’t think that we were really recognised. Of course, there was no social media and that sort of thing then. 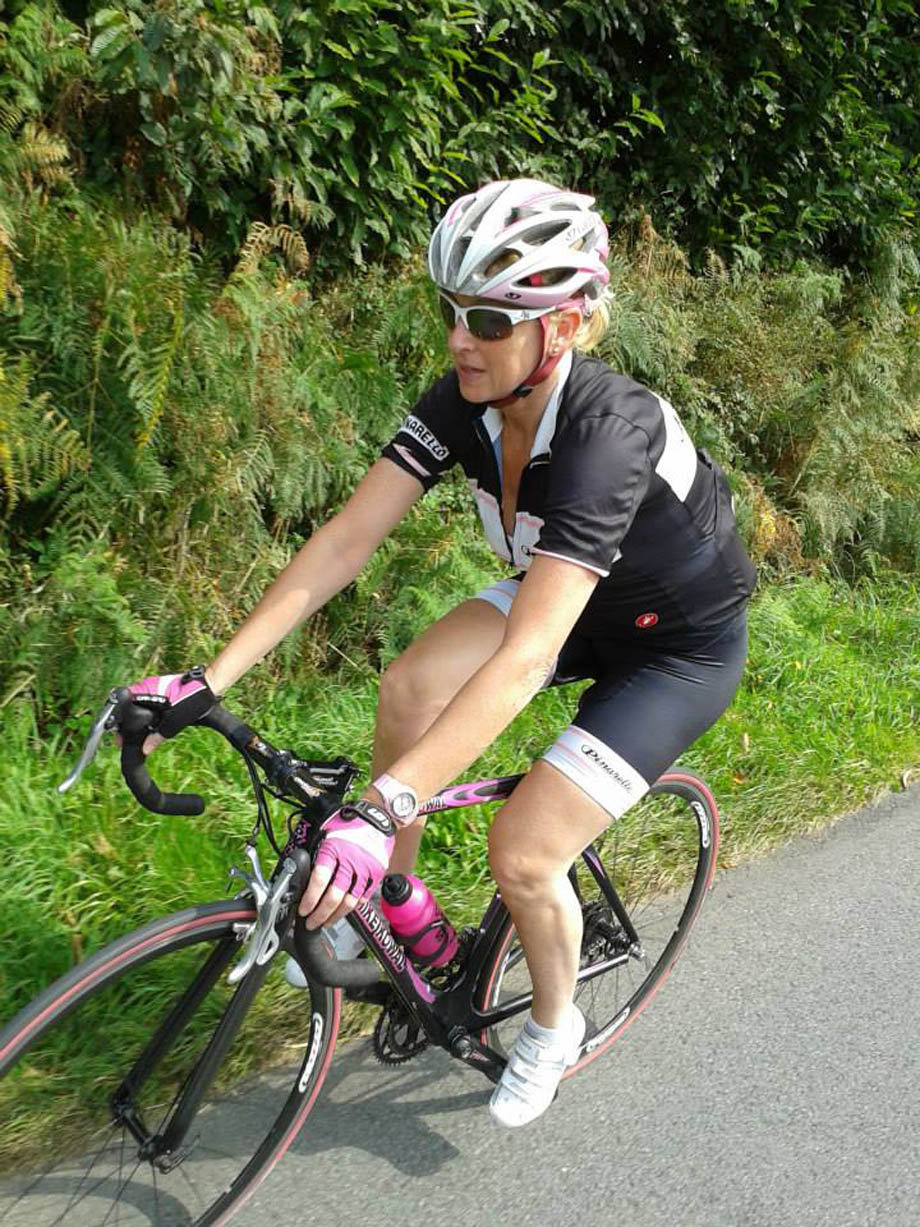 Paul: What happened next?
I finished the season in the UK, and then stepped away from International racing. I just did a few time trials; I had a small comeback in 1986, I had a few results and was back in the GB Squad but they still had no money. So I found it difficult to compete at that level and work part time.

Paul: And now?
I still enjoy riding my bike, and riding with family and friends. I’m a Mother and a Grandmother, and enjoy all that goes with that.

Paul: Thank you Louise for sharing your story. 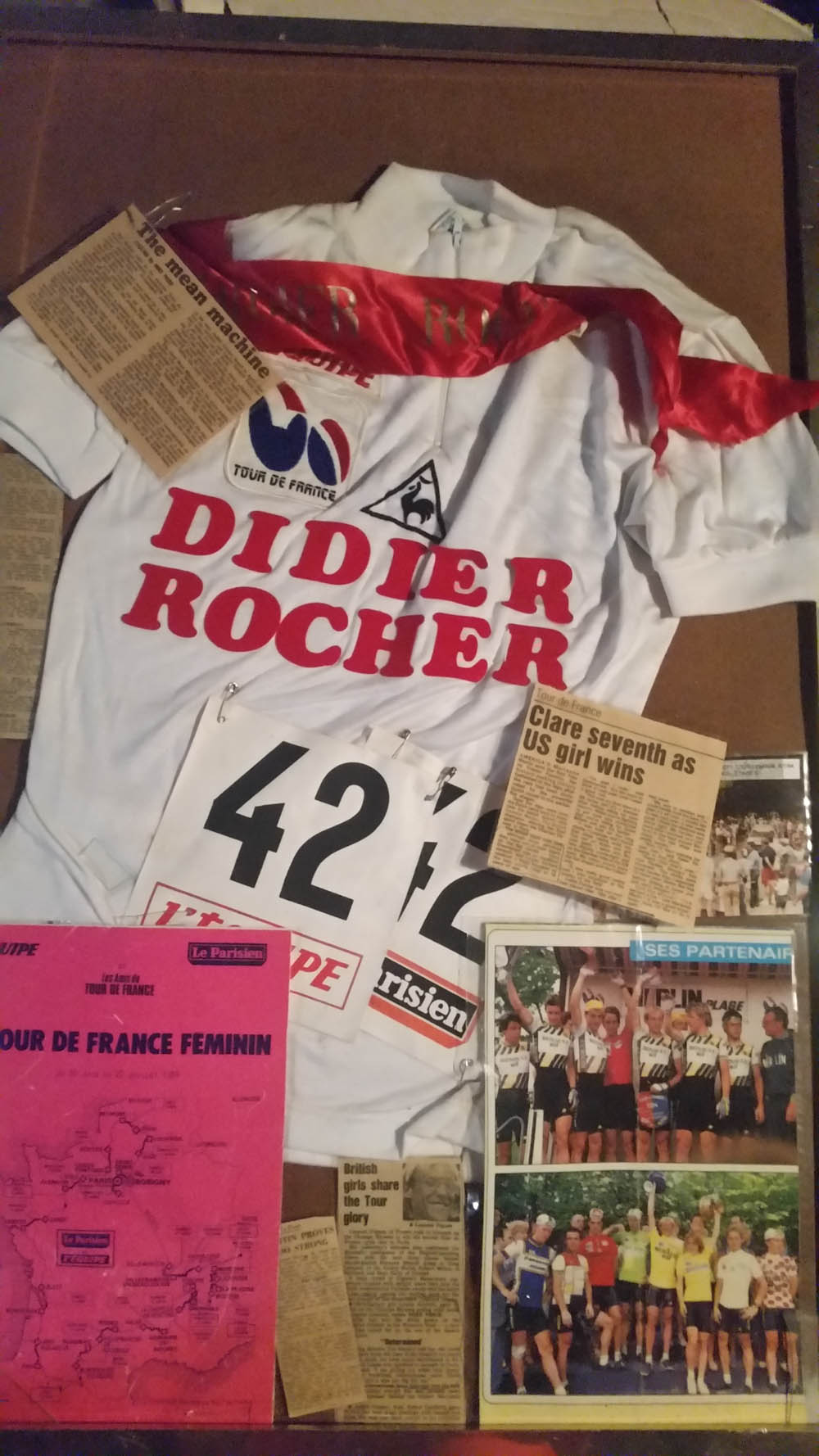 Paul’s Reflections:
Louise takes us back to a time when, in the UK, cycling was a minority sport, with little media interest or money. However, her achievements, together with those of other GB riders and the volunteers who supported them like Pat Liggett, paved the way for the growth and success of UK cycling. The women’s Tour Feminin was an experiment, but it was a success, and went on until 1989 – but with progressively fewer stages each year. Many people, including some of the male riders of the time, didn’t think that women could ride 18 stages; Louise and her counterparts proved them wrong, and this was a major stepping stone for women’s cycle racing.