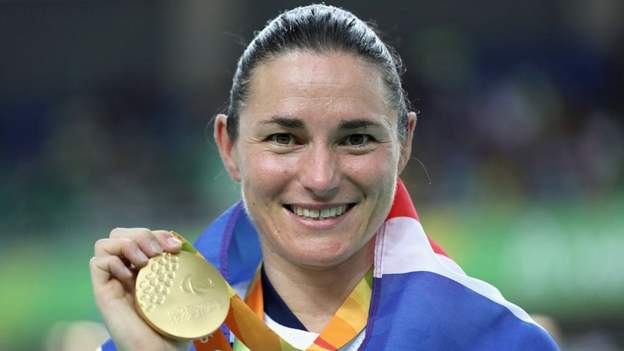 Dame Sarah Storey is looking to become Britain’s most successful Paralympian after being named in the Para-cycling squad for her eighth games.

The 43-year-old will defend her titles in the C5 individual pursuit, C5 time trial and C4-5 road race events.

Storey has 14 golds to her name and victory in the three events would see her surpass swimmer Mike Kenny’s record of 16.

In total, 14 riders have been selected to compete and six pilot riders.

“I’m hugely proud to have contributed to such a significant era in Paralympic sport and am incredibly excited to attempt to defend the three gold medals I won in Rio,” said Storey, who has won 25 medals in total.

British Cycling’s performance director Stephen Park is confident the team can build on its 21-medal haul from five years ago.

“This is a really exciting team, and I am confident we will have another successful Paralympic Games with the riders we have selected,” he said.

“British Cycling has an established record of supporting riders to achieve their best at the Paralympic Games and I look forward to seeing this team live up to that tradition and the pride in the jersey that comes with it.”

Penny Briscoe, ParalympicsGB chef de mission, added: “Cycling has been one of our highest-achieving sports at recent Games and in Dame Sarah Storey have an athlete who has already achieved so many incredible milestones in her career with potentially more to come at Tokyo 2020.”