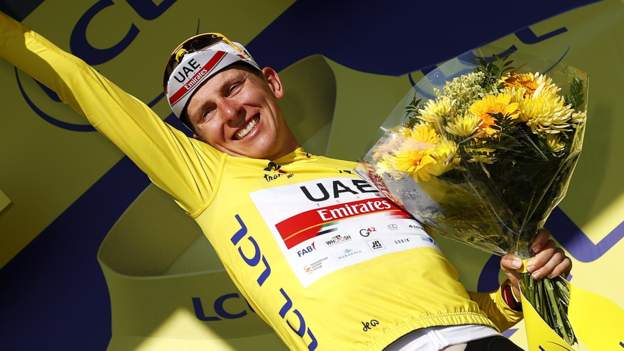 Tadej Pogacar is set to win the Tour de France after finishing seventh in the time trial on the penultimate stage.

Pogacar, 22, will officially claim the yellow jersey after Sunday’s final stage to Paris, when – by tradition – the leader is not challenged.

Pogacar, of UAE-Team Emirates, is set to win his second Tour having clinched the 2020 race in the final time trial.

He overhauled fellow Slovenian Primoz Roglic of Jumbo-Visma on the penultimate stage to win by more than a minute that day – but did not need to repeat his heroics this time.

Pogacar is set to win the general classification by five minutes 20 seconds from Jumbo-Visma’s Jonas Vingegaard.

“I’m super happy to finish – it went so fast. There was so much support on course, I was just enjoying every moment though I was suffering as it was super hot,” said Pogacar.

“I cannot describe it. I was going flat out but it was totally different to stage five [another time trial, won by Pogacar] where there was much more adrenaline. But today I did my best – I was prepared, but not as good in the legs.

“I cannot compare – last year was something else. This year is just different.”