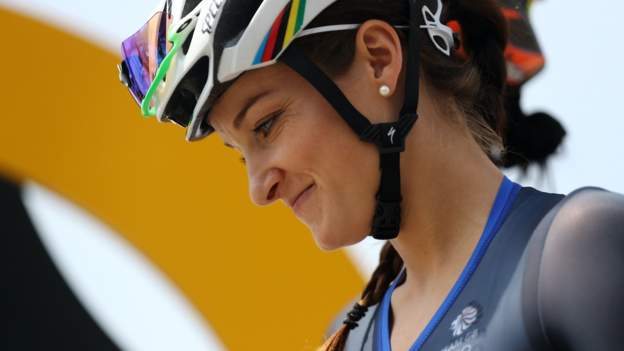 Lizzie Deignan looks back on the 2016 Olympics knowing she is a stronger person because of it.

But that doesn’t take away how “horrific” the experience was for her, one that stripped away her love for cycling and left her questioning where her future lay.

It was just days before the women’s road race in Rio when the news broke that Deignan – then Armitstead – had been cleared to compete by the Court of Arbitration of Sport (Cas) having been suspended from cycling the previous month.

She had been facing a four-year ban for missing three drugs tests within a one-year period, putting her Olympics in jeopardy.

Though accepting the second and third instances, Deignan argued the first was not her fault but that of the testing authorities, and Cas agreed with her.

“It was horrific to be accused of being a doper when it was the very last thing I would ever do,” she tells BBC Sport.

“It was hard to have yourself so publicly questioned. Lies can be written, and you have no control over it.”

This wasn’t how the Games were supposed to be for Deignan, a dominant force in women’s cycling and the reigning world champion.

Abuse followed her every move, as it did her family, and security was required in Rio to ensure her safety. In the end, she finished fifth.

“It was just a bike race to get through at that point, it wasn’t about trying to win an Olympic medal anymore, it was just about getting the race done and getting home,” the 32-year-old says.

“I was thrown into this media storm where my whole reputation was being put on the line. It was very difficult to process it, and cope with it. It was a very, very difficult time.

“But honestly I can say that I’m a stronger person for it, it’s taught me a great deal about lots of things.”

In the aftermath, Deignan “definitely” thought about calling it quits. She was unhappy for a long time after Rio until, she says, she went on maternity leave in 2018.

Orla’s arrival, that September, changed everything.

“It made me fall back in love with the sport,” she says.

She points to the “external pressure” during the chapter of her career before she became a mother, when it was “almost like the people around me wanted it more than I did”.

In this new chapter, one of “balance and perspective”, she has regained the ownership of her own goals and dreams. Since returning from maternity leave, the Trek-Segafredo rider has won the Women’s Tour and the overall 2020 World Tour title.

“When you’ve spent 10 years pursuing one goal of being the best in world at something, and then you achieve it, you’re met with this question mark of is that enough? What do I do now?” she says.

“I became world champion and strove for that Olympic gold, I didn’t achieve it but I got close, and I just thought ‘I don’t know what I’m doing it for’. I felt like I got to a point where I was doing it for other people.

“It was such a shock to other people when I became pregnant, and I thought ‘when did I become just a cyclist in your eyes?’ ‘Why is it such a shock for you that I would like to make a human decision and something that would make me happy?’

“Stepping away from sport was a good thing to do to realise who I am as a person and what makes me happy, and to just do something for myself. I think coming back into sport, I’m doing it for me, and that’s what I’d lost.”

She adds: “Orla has given me a huge sense of balance and perspective that it’s quite a selfish thing to do to try and just pursue this one goal for yourself.

“It’s not the be-all-and-end-all and it doesn’t make me who I am. Who I am is Orla’s mum and Phil’s wife. I like having more to my identity than just being a cyclist.”

But still that Olympic gold evades Deignan, and the upcoming Tokyo Olympics – her third Games – will be a very different experience to Rio in more ways than one.

Delayed by a year because of the coronavirus pandemic, no overseas fans are permitted and that’s something Deignan, who won road race silver at London 2012, isn’t looking forward to.

“When I took maternity leave to have my daughter, the biggest goal, the carrot at the end of all the hard work, was Tokyo – that’s why I came back,” she says. “To have it postponed last year was difficult.

“I’m definitely somebody that performs really well on the big occasion, so I feed off crowds, I feed off pressure, so I think I will miss that.”

It means she will have to leave her husband, former cyclist Philip Deignan, who is also her coach, and little Orla behind – something they are used to though it never gets easier.

Orla understands why she goes away so often, but loves to watch races and waves at aeroplanes flying overhead when mum is away.

But whether this will the first and final time Orla waves her off to an Olympics is a decision yet to be made.

“Is there Paris in me? It depends on which day of the week you ask me,” Deignan says. “Today, no, a hard bike ride and a grumpy toddler, but tomorrow might be a lovely bike ride and Orla might be brilliant.

“Whatever happens, it will be a family decision.”