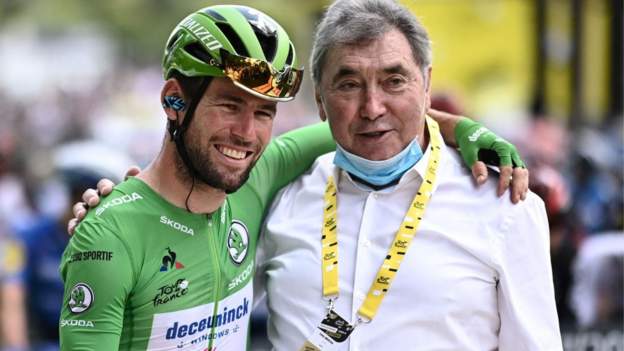 Mark Cavendish rolled back the years at the Tour de France to win the green jersey for the first time in a decade in Paris on Sunday.

“If we’d talked four weeks ago I wasn’t even going to be at this race,” said Cavendish, who was drafted in as a late replacement after his Deceuninck Quick-Step team-mate Sam Bennett was injured and went on to win four stages.

“I never really thought about getting it [the green points jersey] since 2011. I am super grateful – it feels like I am getting younger. I’m back, it’s a dream.

“To be here 10 years later, again with the green jersey, it’s fantastic. The support of the public has been incredible during all the Tour de France. Coming back to Paris is an honour.”

Cavendish had feared his career was drawing to a close and battles with illness, injuries and depression contributed to him not winning once during 2019 and 2020.

BBC Sport looks at how a rider who was out of form, out of contract and seemingly out of options recovered to write one of the most remarkable stories in the history of the Tour.

Back in the colours of Deceuninck Quick-Step, a team Cavendish has admitted he should never have left, he has delivered an unexpected resurgence.

But it has been a long road. A battle with Epstein-Barr virus and a succession of injuries was followed by a diagnosis of clinical depression in 2018.

His winless run saw him miss the Tour in both 2019 and 2020 and he was left without a team when Bahrain-McLaren (now Bahrain-Victorious) decided his best days were behind him last autumn.

There was even a suggestion that the Manx rider was heading for retirement in a tearful and brief interview after Gent-Wevelgem in October.

However, Quick-Step boss Patrick Lefevere stepped in, and a combination of Cavendish’s determination and fate also played a part, with Bennett’s injury opening the door to a return to La Grand Boucle for the Manx sprinter.

“I always say I have the right to make one mistake a year but I didn’t [with Cavendish],” said Lefevere, who saw Cavendish win four stages of the Tour of Turkey in April and the final stage of the Tour of Belgium in June.

“He was almost out of cycling, I took him back in and when I saw in the December camp he was mentally happy then I understood he could do a lot of nice things. It is a different Mark Cavendish.

“Nobody sees he did 10 days in Greece with our trainer [Vasilis Anastopoulos], that he was training like hell. It’s not by luck. You do not win stages [at the Tour de France] by luck.”

Cavendish is ‘the story of the year’

Many in the peloton doubted whether Cavendish would ever return to the top level, never mind become the fastest thing on two wheels in cycling’s most prestigious race.

“It’s inspirational to a lot of people especially guys in my kind of position, older guys still fighting for victories in the peloton. It is incredible what he has achieved,” Froome said.

“Coming back from a long dry spell like that and proving all the doubters wrong – he has come back swinging. I could not fault him.”

There was also praise from Cavendish’s former boss Rolf Aldag, who added: “It’s the story of the year. It might be the story for the next five years how he’s fought back and succeeded.”

Cavendish, who is now expected to speak to team boss Lefevere about a new contract, jokingly added: “I’ll buy him some whiskies tonight and then we’ll see.”

How Cavendish cemented his status as Tour legend

While Cavendish remains level with Merckx on stage wins, his record means he is undoubtedly the greatest ever sprinter to compete in the 21-day race.

He is 12 wins ahead of Andre Darrigade, the next sprinter on the all-time list, and more recent riders such as Marcel Kittel (14), Mario Cipollini (12), Peter Sagan (12), Robbie McEwen (12) and Andre Greipel (11) are even further adrift.