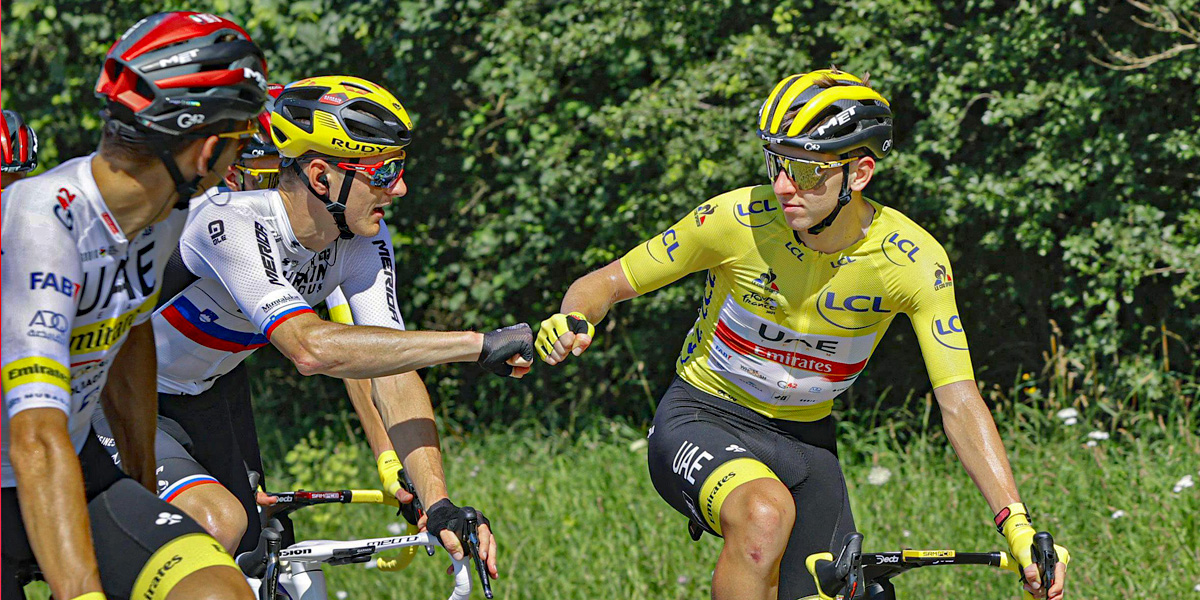 Stage Report: It wasn’t to be Mark Cavendish’s day as Wout van Aert (Jumbo-Visma) showed again his phenomenal ability on a bike by winning on the Champs Élysées. The day did belong to Tadej Pogačar (UAE Team Emirates) taking his second Tour de France. 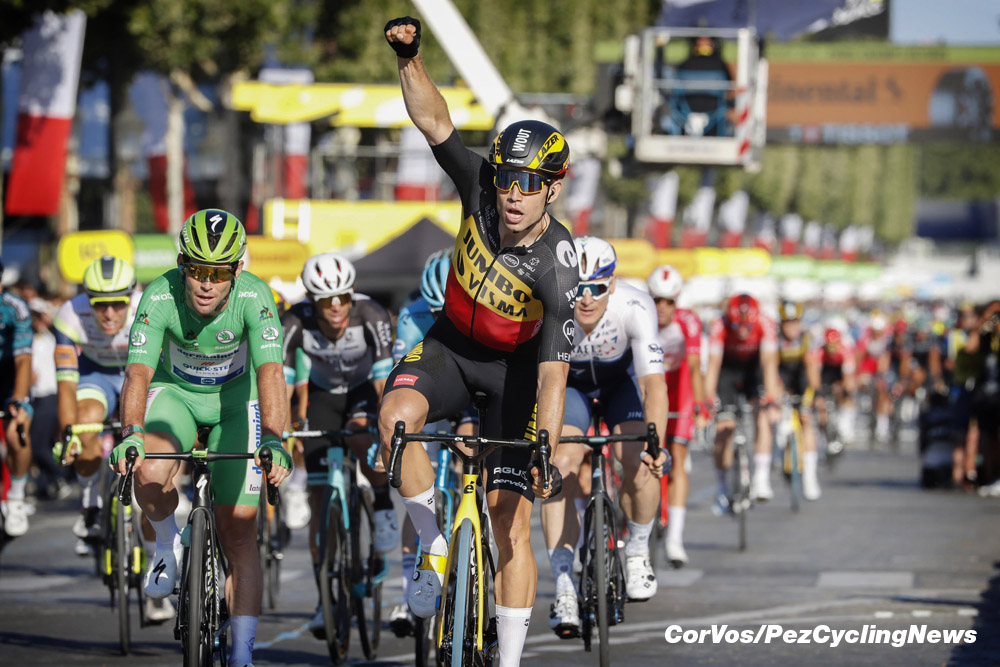 What can’t Wout do?

– The final kilometre of Stage 21 and read our full report and pics below:-

Tadej Pogačar is the winner of the Tour de France 2021. The 22-year-old Slovenian adds his name to the honours list of the world’s largest bike race for the second time. The final stage to Paris was won by Wout van Aert, who was fastest ahead of Jasper Philipsen and Mark Cavendish in the bunch sprint on the Champs-Élysées. 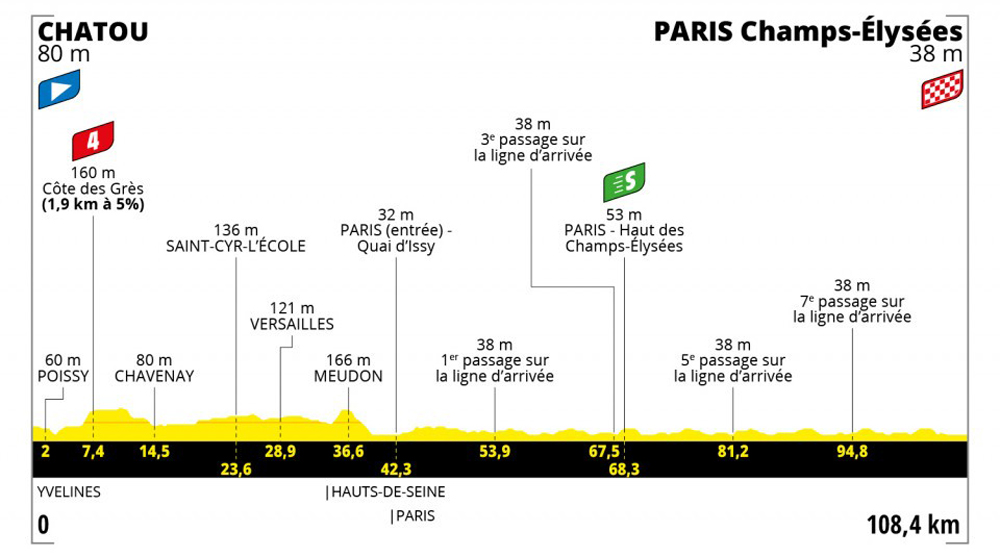 Tour boss Christian Prudhomme describes stage 21: “Chatou is the happy “chosen one” for this fourth consecutive start of the final stage in the department of the Yvelines that will carry on doing so until 2023. The Yvelines has become a land of cycling, it has indeed welcomed the start of Paris-Nice for ten years now and will be hosting the discipline (road, track, mountain bike and BMX) for the 2024 Olympic Games in Paris.” 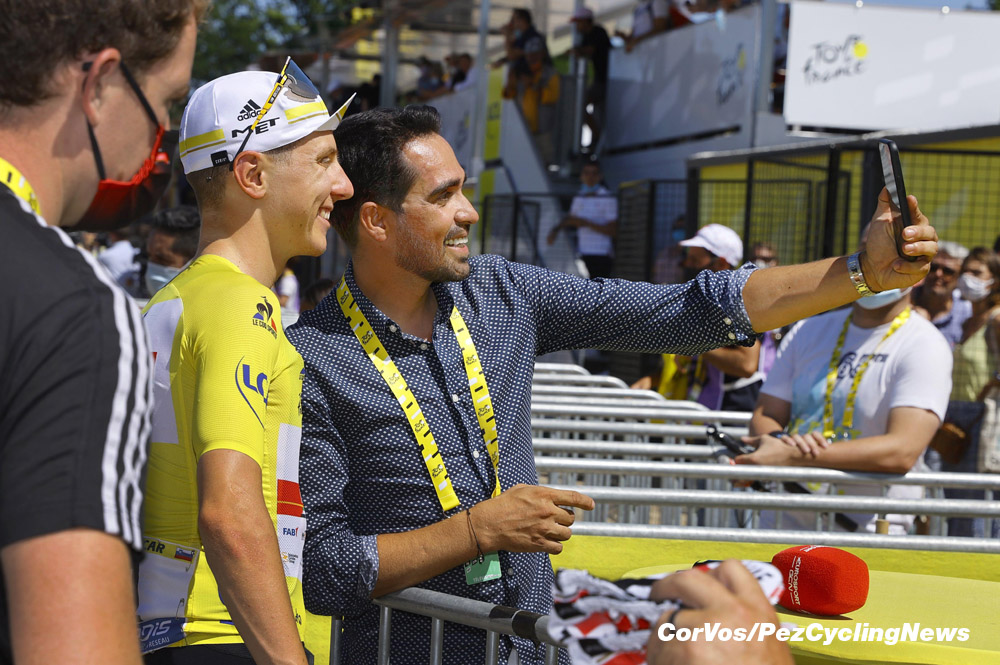 The final stage started as always with lots of jokes, autographs, conversations and photo opportunities, the champagne was missing this year. Also absent: Jakob Fuglsang, who felt sick and didn’t start with a view to Tokyo. There was a party with Tadej Pogačar’s UAE Team Emirates teammates. The team wore a white jersey with a yellow chest band especially for this stage to Paris. 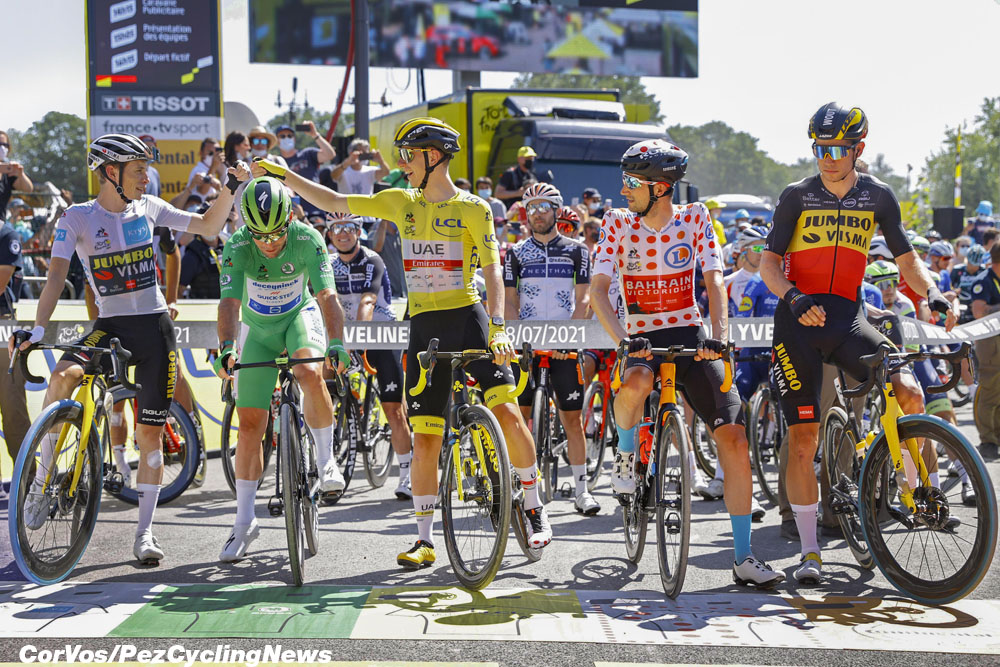 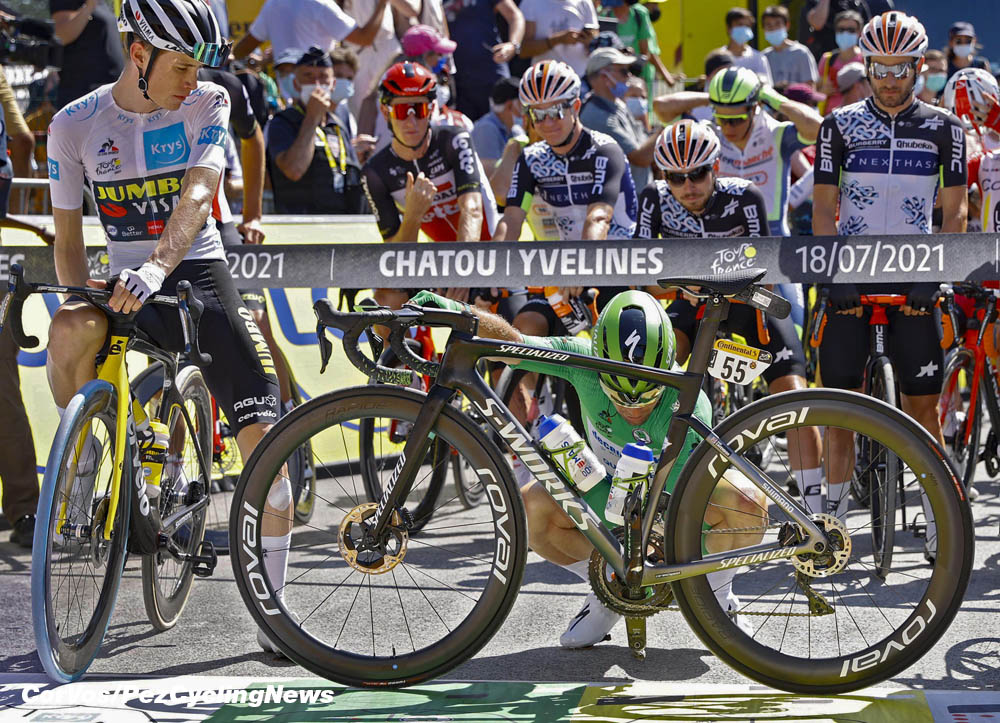 At around 6.15pm, Paris time, the peloton turned onto the local circuit on the Avenue des Champs-Élysées in the heart of the French Capital. The first attacks came from Jonas Rutsch and Brent Van Moer, but the first group that actually escaped consisted of Stefan Bissegger, Harry Sweeny, Casper Pedersen and Patrick Konrad. Pedersen dropped back to work for sprinter Cees Bol. At the intermediate sprint, 40 kilometres from the finish, it was Cavendish in the peloton who was led-out perfectly by Mørkøv to beat Matthews. 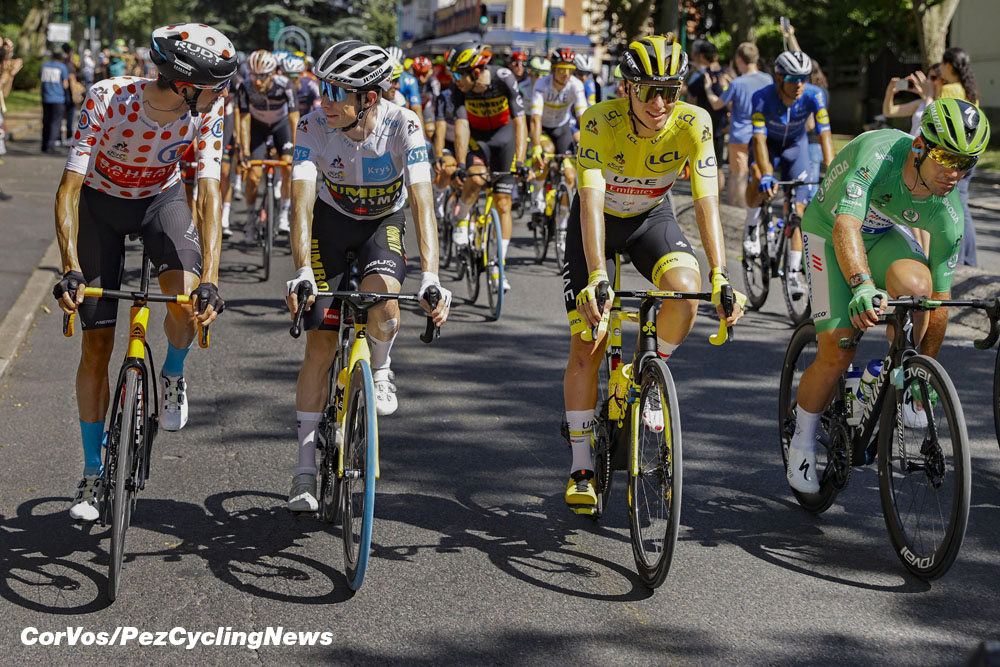 The three jerseys of Tadej Pogačar and the green jersey 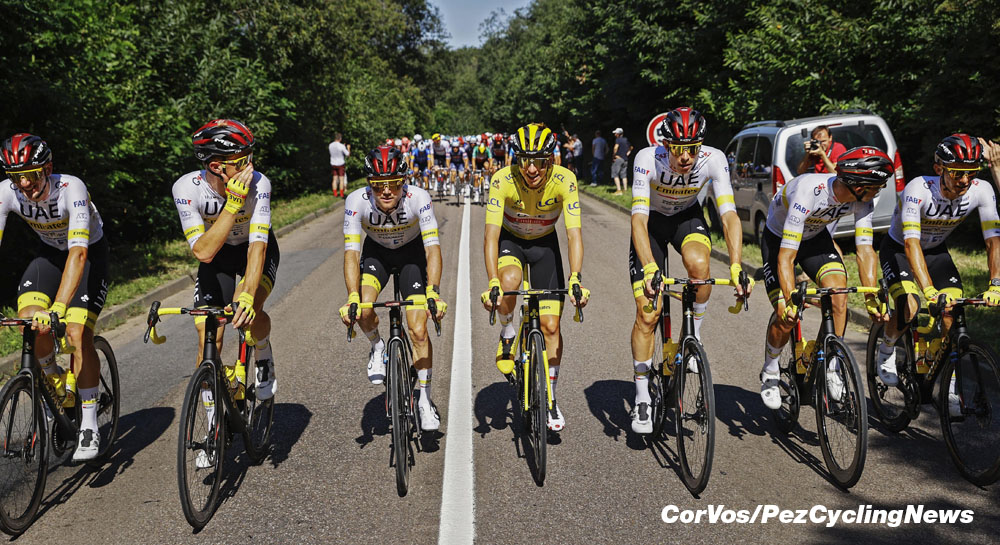 The control then remained in the hands of the sprinter’s teams, but the attacks continued. Especially when Bissegger, Sweeny and Konrad were caught. Ide Schelling and Philipe Gilbert, and others, came to the front. The Dutchman, who showed himself on the offensive at the start of the Tour and wore the polka dot jersey for a few days, eventually had Michael Valgren and Van Moer with him. The trio took more than 20 seconds. 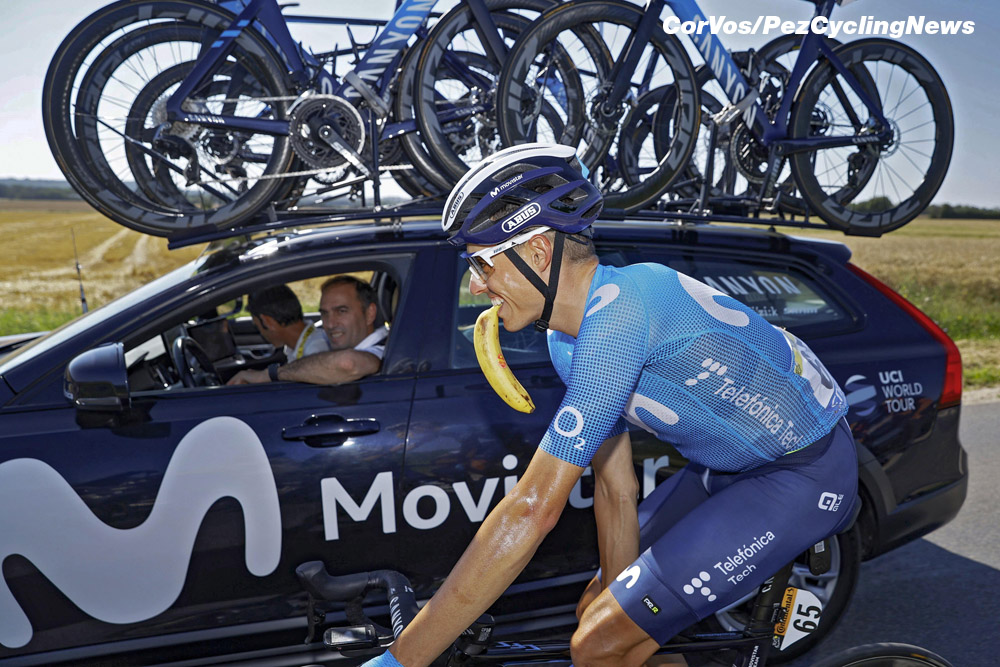 Will this be Alejandro Valverde’s last Tour? 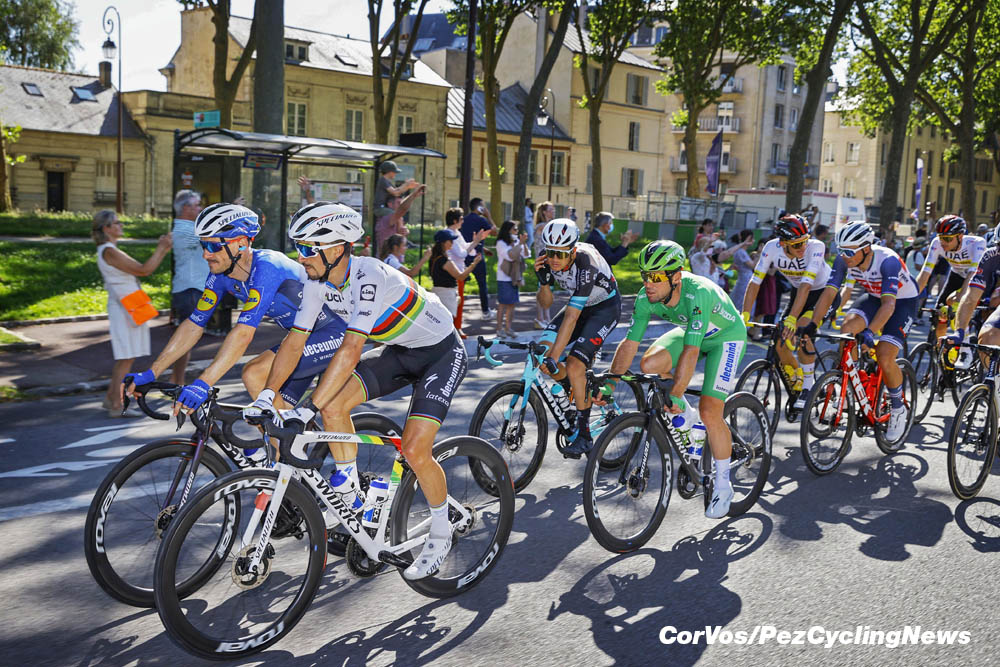 Deceuninck – Quick-Step getting ready for the sprint

Twelve kilometres to go, Schelling, Valgren and Van Moer were still ahead by 20 seconds. B&B Hotels also saw an attacking opportunity with Cyril Gautier and Franck Bonnamour, the winner of the Super Combatants, but that attempt quickly failed. In the peloton, the weight was put on the shoulders of Alpecin-Fenix, Israel Start-Up Nation and also DSM, who were still supported by Deceuninck – Quick-Step in the final. 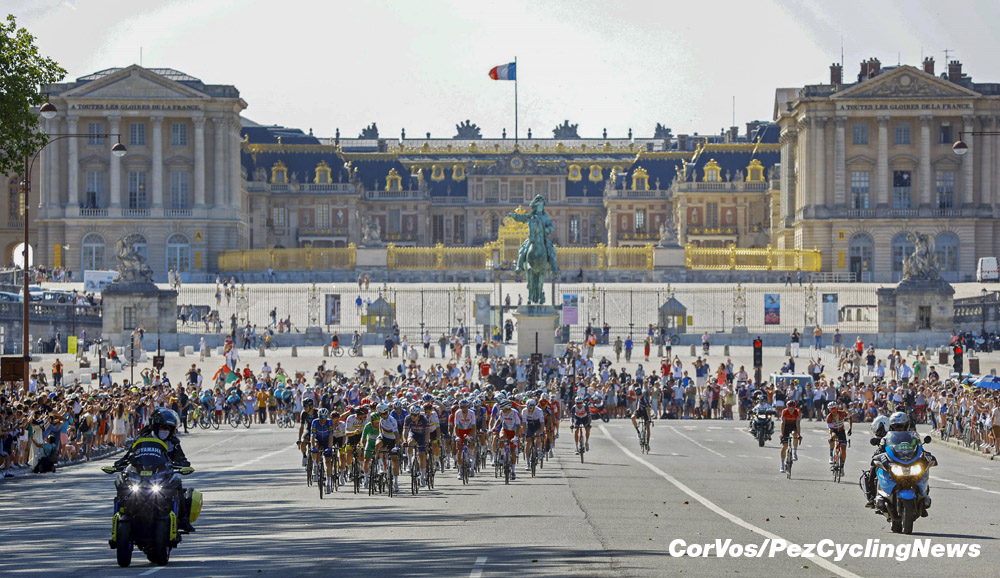 The peloton passing Versailles on the way to the Champs-Élysées 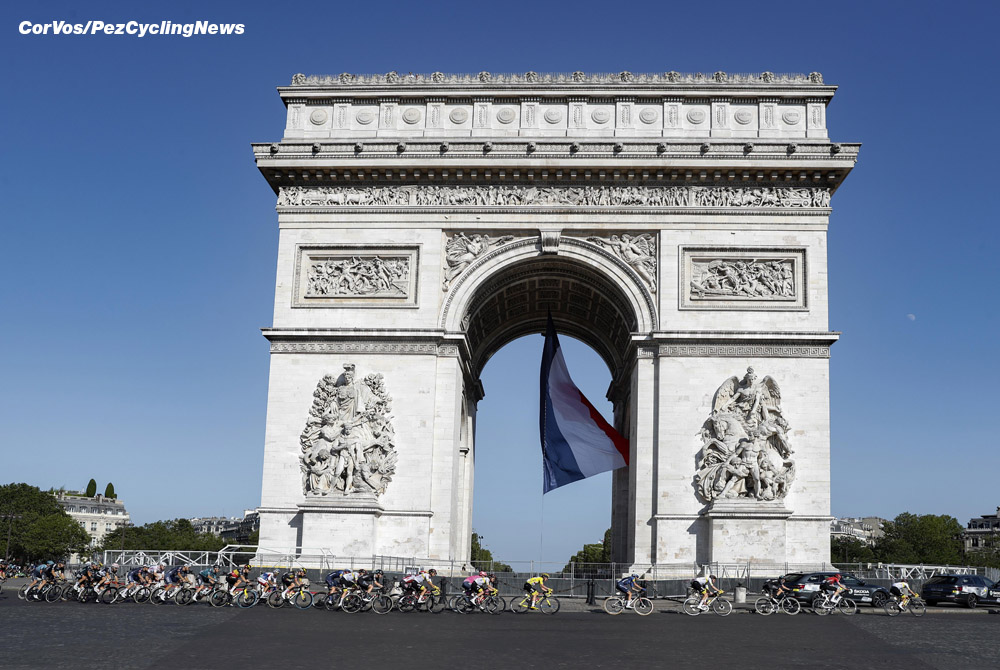 The peloton going round the Arc de Triomphe

The leading trio still had a minimal lead when entering the final lap on the Champs-Élysées, but due to an acceleration of INEOS Grenadiers that also ended. After that acceleration there was some chaos at the front of the pack, where several trains tried to take their position. All the important names were well up front in the twisty final. 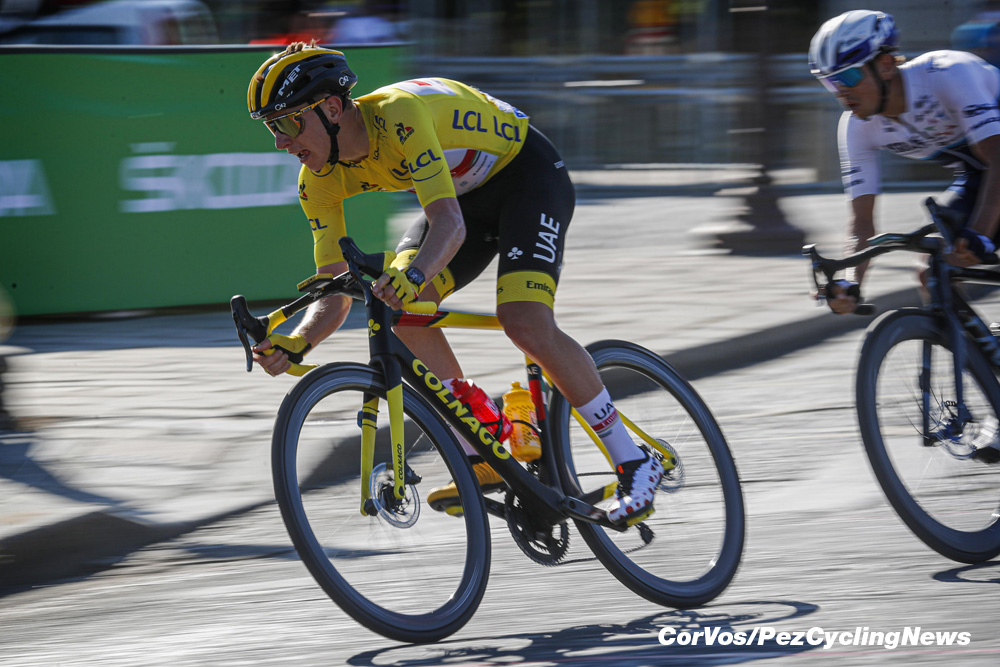 No problems for the yellow jersey 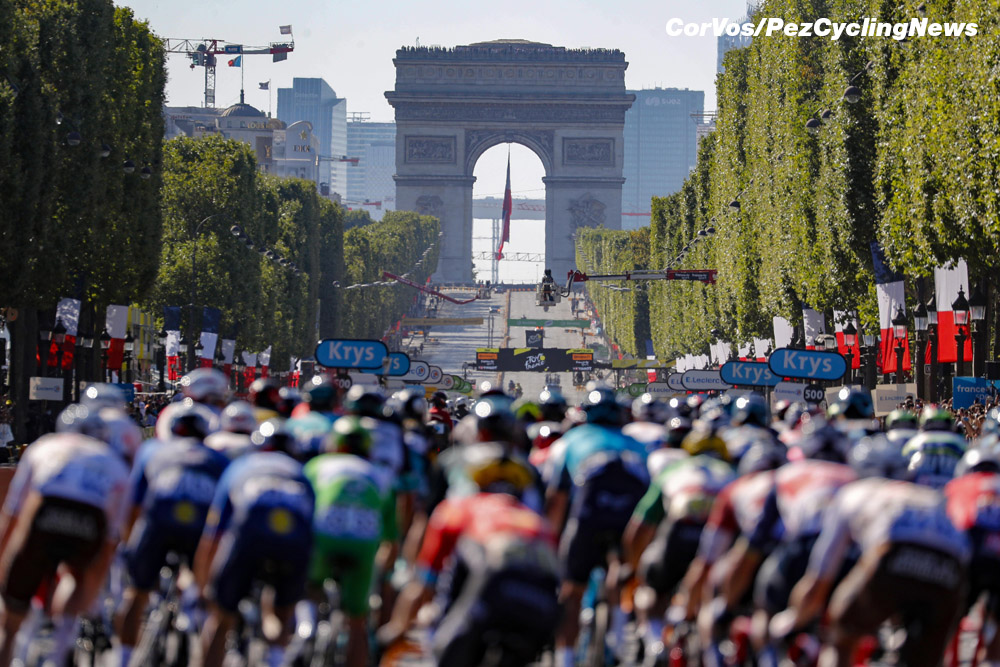 That climb up the Champs

The final sprint was led by Deceuninck – Quick-Step, who could not set up a train for green jersey Cavendish. Mike Teunissen then managed to do an ideal lead-out for Wout van Aert, who chose the right moment and impressively held off Jasper Philipsen and Mark Cavendish for his third stage victory of this Tour. After a mountain stage and a time trial, Van Aert also put a sprint stage to his name in this Tour. 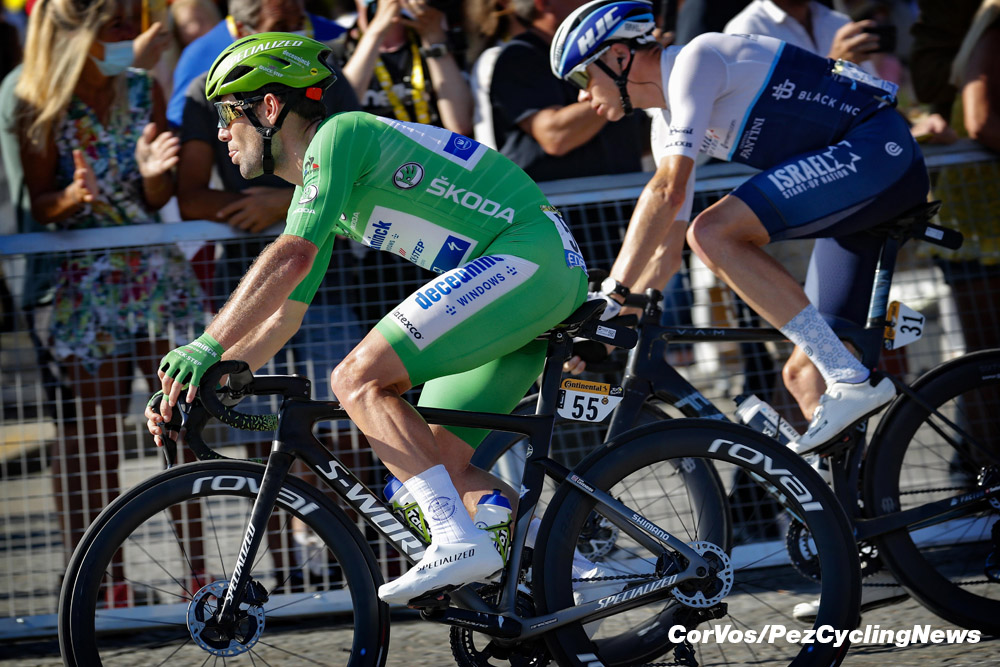 Cavendish ready for the intermediate sprint 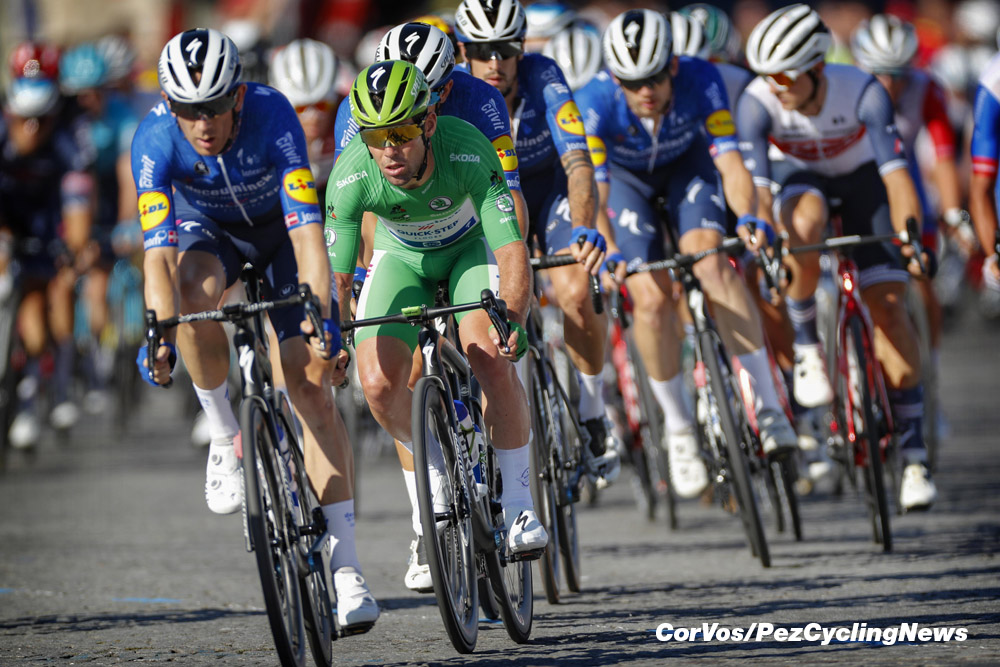 Another perfect lead-out from Mørkøv for the intermediate sprint

A disgruntled Cavendish hit his handlebars because of his defeat, was the record just too much? He remains stuck on 34 stage victories in the Tour, on the same level with Eddy Merckx. The retiring André Greipel finished fifth. 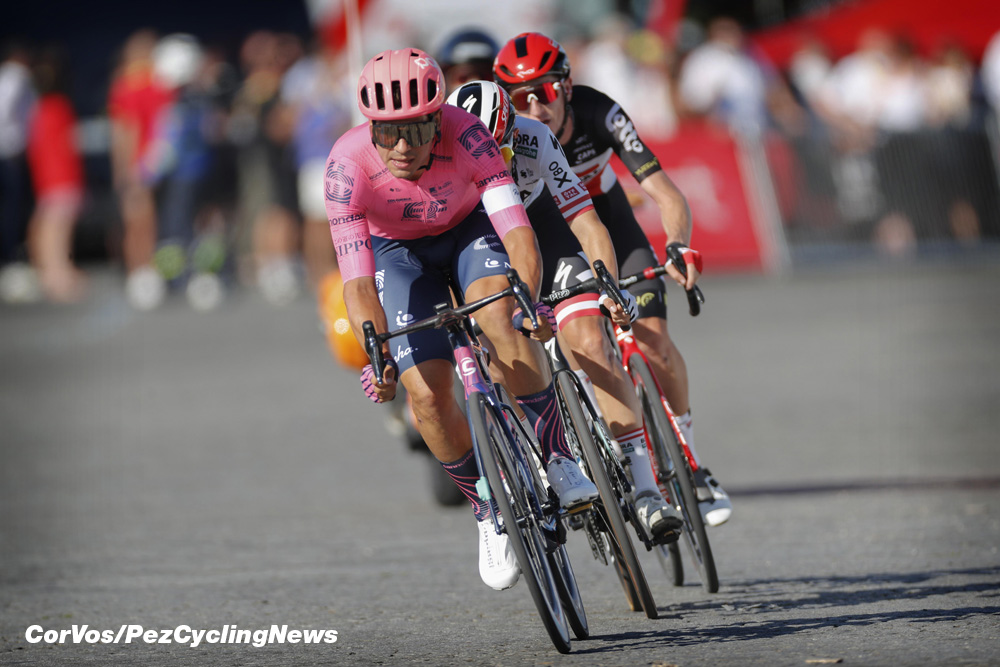 The doomed break of the day 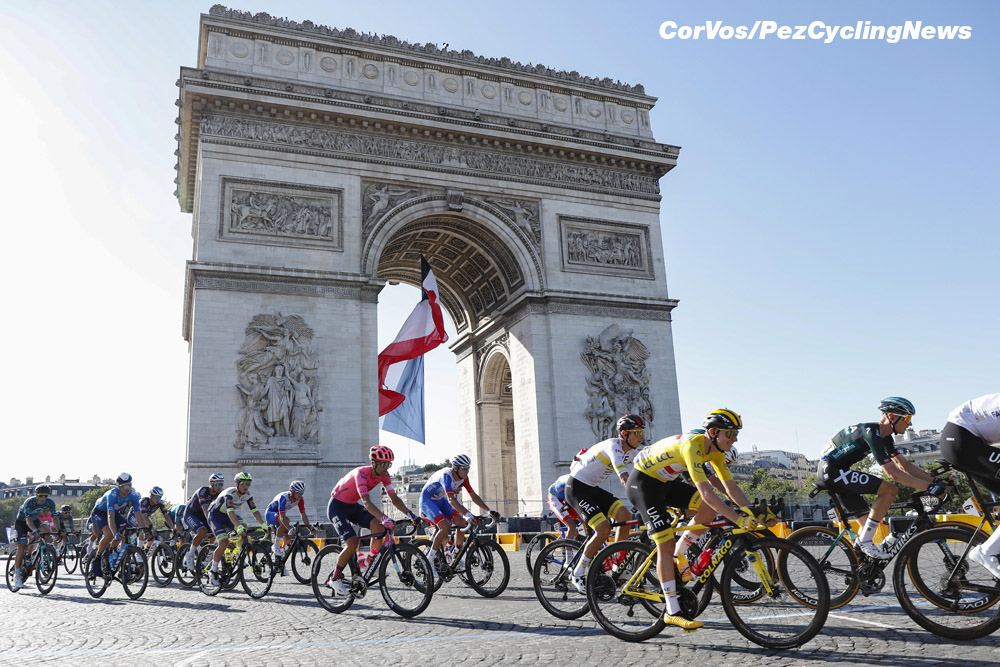 Not long to go for Todej Pogačar

Yellow jersey wearer Tadej Pogačar had no problems in the final, allowing him to celebrate the overall victory with his teammates from UAE Team Emirates. On the final podium in Paris, he will be joined by Jonas Vingegaard (Jumbo-Visma) and Richard Carapaz (INEOS Grenadiers). Pogačar also picked up the KOM jersey and the best young rider jersey. After 2011, Mark Cavendish received the green jersey for a second time. 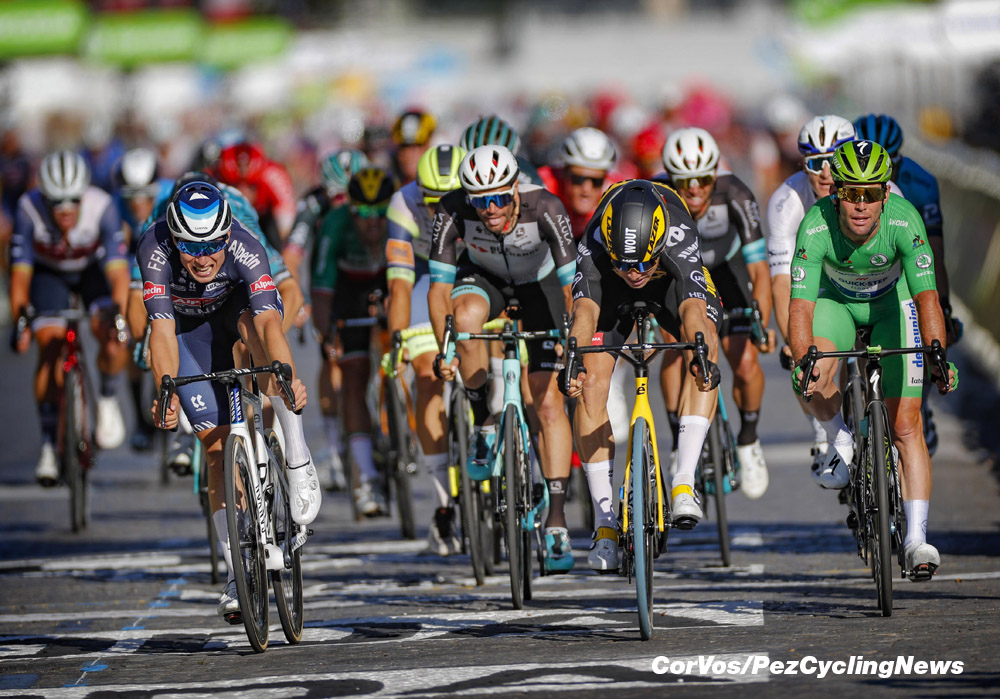 Stage winner, Wout Van Aert (Jumbo-Visma): “Actually, I can’t believe it. This Tour de France has been amazing. It has been such a rollercoaster. To finish with three victories in my pocket is just out of my expectations. A victory like this is priceless, although I have to catch my flight to Tokyo tonight. Thanks to my small team and especially to Mike Teunissen, who put me in the perfect position ahead of the sprint. It was key to be delivered on a good position after the final right-hand turn. I was confident Mike could do it, and he did it perfectly.” 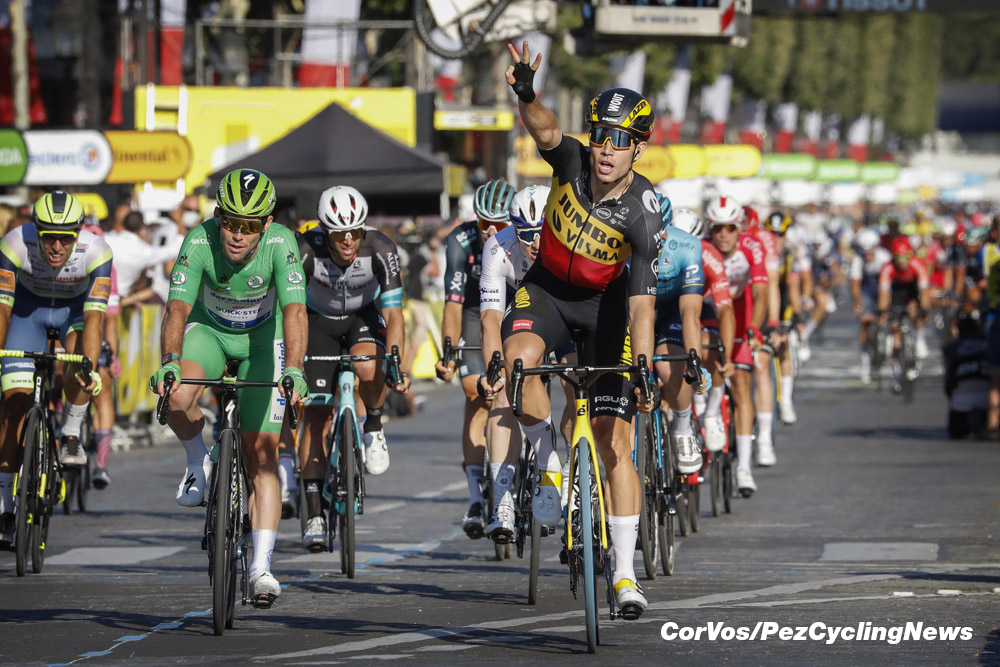 Final overall winner, Best Young Rider and KOM, Tadej Pogačar (UAE Team Emirates): “It is just crazy here on the Champs Elysées, coming in the yellow again with an incredible team. We enjoyed today and now it’s time for celebration. We will have a good time and that counts as a celebration. The start of the stage was nice, taking it easy. We enjoyed chatting with each other. Then we came here on the cobbles and it was full-gas racing again, like every day. I cannot express my feelings of how happy I am. With the people I have around… it’s another level. I will remain motivated in the coming years, but what come next will come next… I’m not stressed about it. It’s quite different. Last year, I felt strong, incredible emotions. This year I’m again here, standing atop the podium, but the feelings are quite different. The new Cannibal? I don’t like to compare myself to other riders. Each rider has his own style and personality. Every rider is unique. I don’t think there is anything left. I just enjoy life, I work hard, I love cycling – and those are the most important things.” 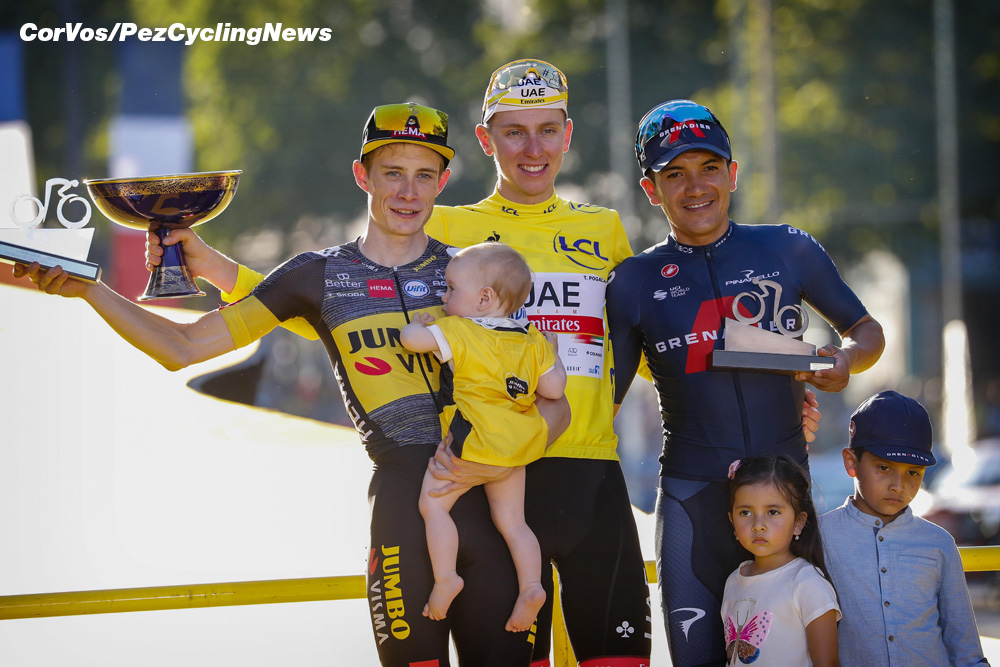