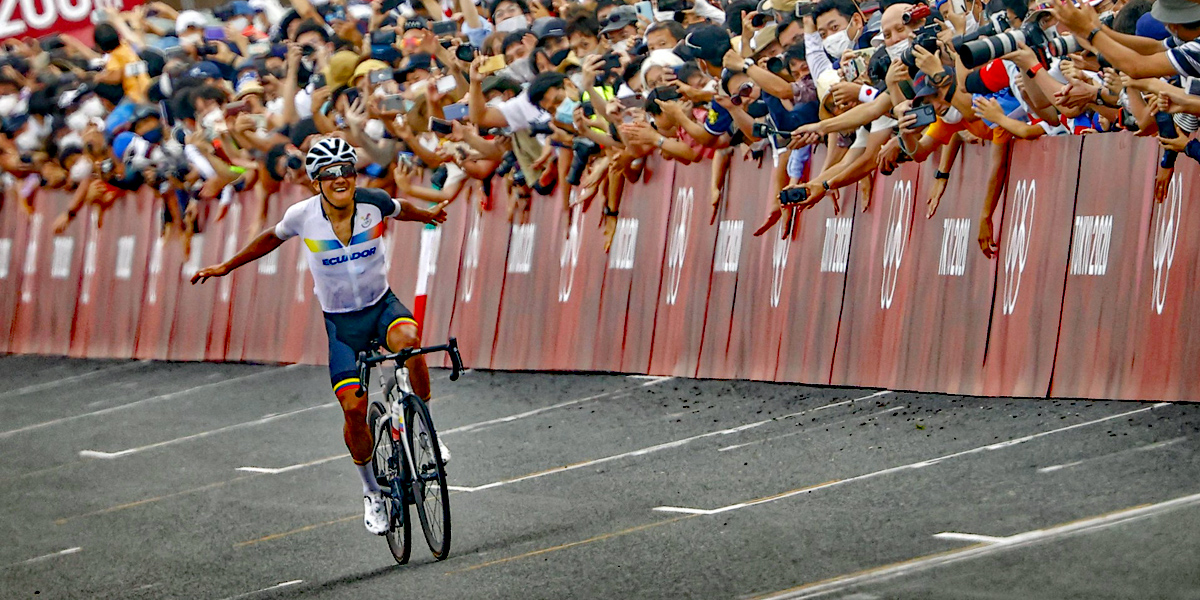 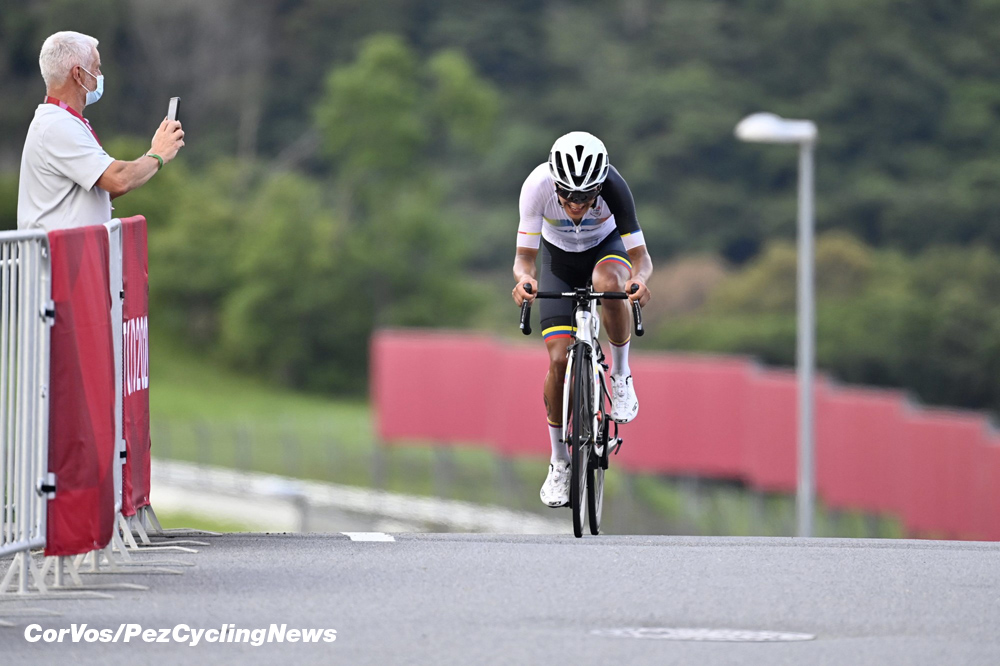 A great day for Carapaz and Ecuador

The Men’s Olympic Road Race, which snaked around the lower slopes of the majestic Mt. Fuji, was as brutal as advertised and produced a fantastic breakaway winner, with Ecuador’s Richard Carapaz taking gold ahead of pre-race favorites Wout van Aert and Tadej Pogačar. Carapaz’s solo victory in the Men’s race was absolutely fantastic and somewhat turned the tables on his rivals, who appeared to have his number at the recent Tour, and brought home an incredibly important Olympic Gold medal for his home country of Ecuador. 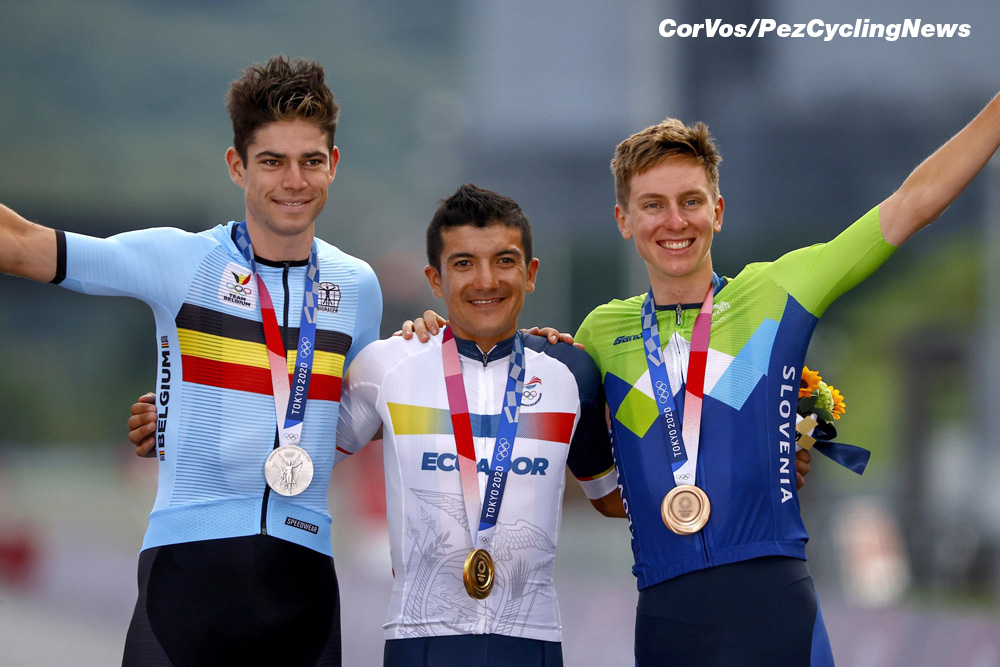 1) Carapaz’s win is monumentally important for both him and his home country of Ecuador. After coming in third place in the Tour de France, he rallied to win what will likely be the biggest win of his career. The win will resonate in his home country since it is only their second-ever Olympic gold medal and only third-ever medal.

2) Carapaz won this race in peak vintage Carapaz fashion. He used both his tactical nous and his raw strength to attack the favorites at just the right time and use the mismatched incentives in the group behind to leverage the result. While favorites like Remco Evenepoel, Vincenzo Nibali, and Wilco Kelderman were attacking needlessly in the run-in to Mikuni Pass, Carapaz sat in and didn’t show himself until he attacked with the USA’s Brandon McNulty after the summit. This attack set him up for the win since it meant the group of favorites behind contained Wout van Aert, who nobody in their right mind would pull to the finish line. 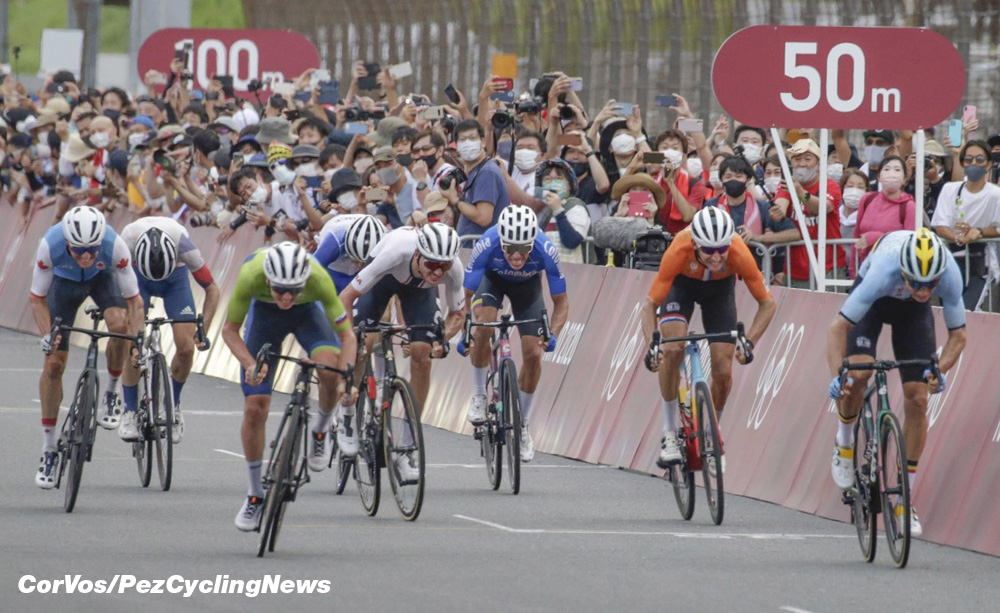 Close battle for silver and bronze

3) Wout van Aert’s second place is a great result, especially after he worked to close nearly every gap in the final 30-kilometers on a course that didn’t particularly suit him. But, it highlights the issues he will face in one-day races for the next few seasons. The result was almost a mirror-image of the 2020 World Road Race Championships where Julian Alaphilippe won solo after attacking in the finale and counting on nobody in the chasing group working with a rider who is almost guaranteed to win the sprint. This will continue to happen over and over again to Wout in one-day races until he realizes that the only remedy is to be the rider who goes on the attack first.

4) Tadej Pogačar’s third place overall and close second in the bunch sprint behind one of the best sprinters in the world, Wout van Aert, shows us just how versatile and impressive the two-time Tour winner is. This result is even more impressive when we consider he flew over later than the others due to sponsor engagements in Paris after his Tour win, and the fact that he presumably trained and peaked for the Tour, not a one-day race around the world a week afterward. 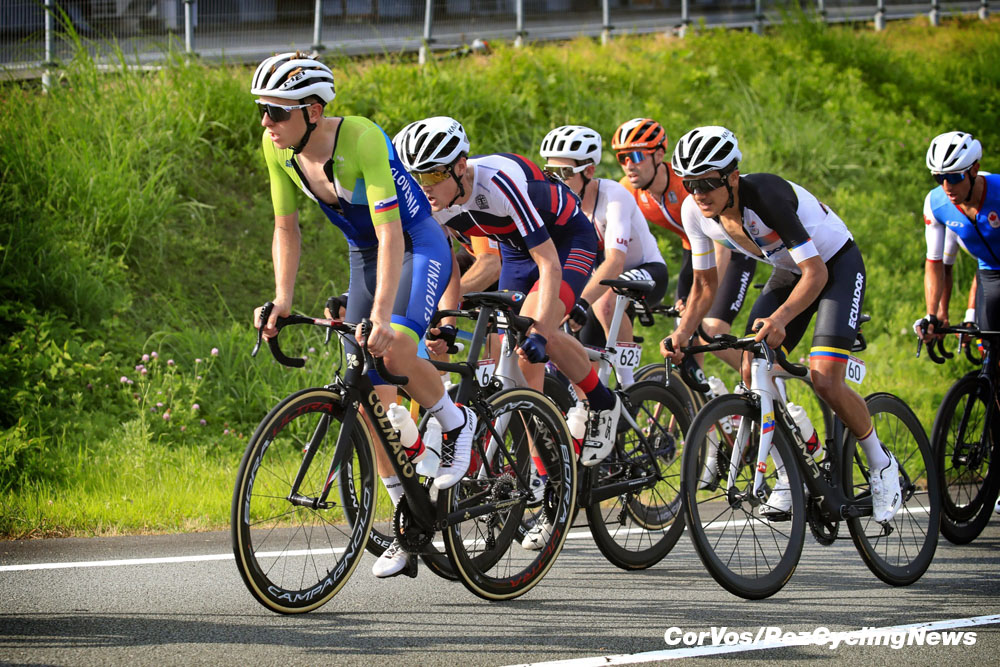 5) This result isn’t a great piece of evidence for those who pointed to Pogačar’s failure to drop his rivals in the third week of the Tour as a sign that he could be vulnerable in the future. While he was still unable to drop the other favorites in the finale, he was clearly feeling strong in the final sprint.

6) His and Kwiatkowski’s disinterest in chasing down the leading duo of McNulty and Carapaz speaks to an open secret in international racing that trade teammates almost always colluding with each other since there are almost always rich bonuses written into their trade team contracts, of which a portion can easily be kicked back to a helpful teammate. 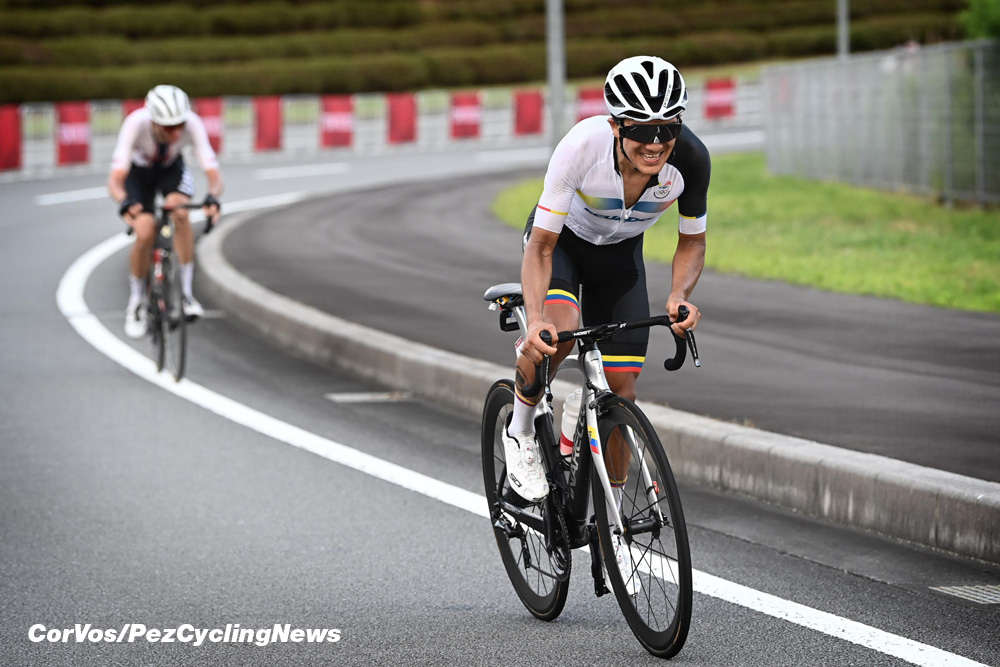 7) In an ironic twist, an Ineos rider wins one of the year’s biggest races, but in one of only two races when he isn’t wearing the team colors.

8) Meanwhile, Ineos’ proxy national team, the Great Britain squad, looked a far cry from their former glory. Adam Yates finished in 9th place but wasn’t able to attack with Carapaz and McNulty, which he would have had to do if he wanted a chance at medals, and Tao Geoghegan Hart and Geraint Thomas, two of Ineos’ stars, continued their Tour struggles by failing to finish. Additionally, Thomas crashed hard early in the race, which continued an undeniable trend of him hitting the deck in nearly every race in which he was taken the start line this season. 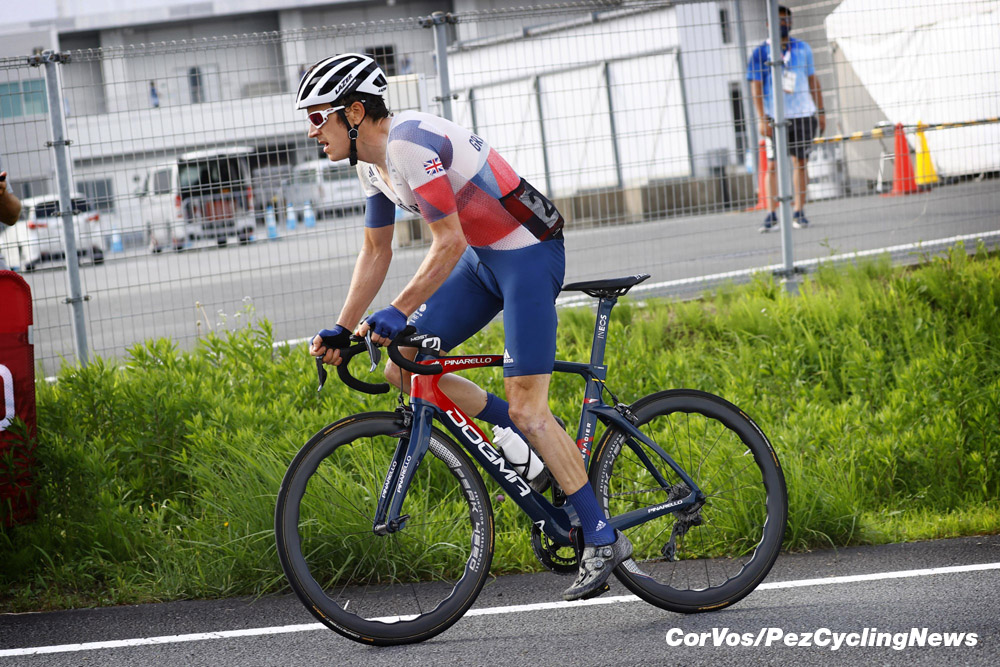 9) Just watching the race on TV it was easy to see just how difficult the course was. Watching riders like Michał Kwiatkowski, Jakob Fuglsang, and Max Schachmann get spit on the back on the flat(ish) run-in to the finish showed us how brutal the race was, which is what made it so great. No rider in the top-10 had a single teammate with them, which turned the race into a rare stripped-down version of professional cycling where the strongest riders have to attack each other without the luxury of teammates to close down gaps.

10) Once again, despite theories to the contrary, the Tour de France proved to be the ideal preparation for the Olympic Road Race. Since the introduction of professional riders in 1996, every Olympic Road Champion has raced the Tour de France prior to the games, and this edition was no different. Every rider in the top-eight completed the Tour, and watching Brandon McNulty and Mike Woods ride to top-six places while superstars like Alberto Bettiol quite literally couldn’t pedal their bikes in the last 10-kilometers should be all the evidence we need that racing the Tour is a required prerequisite for an Olympic Gold Medal. 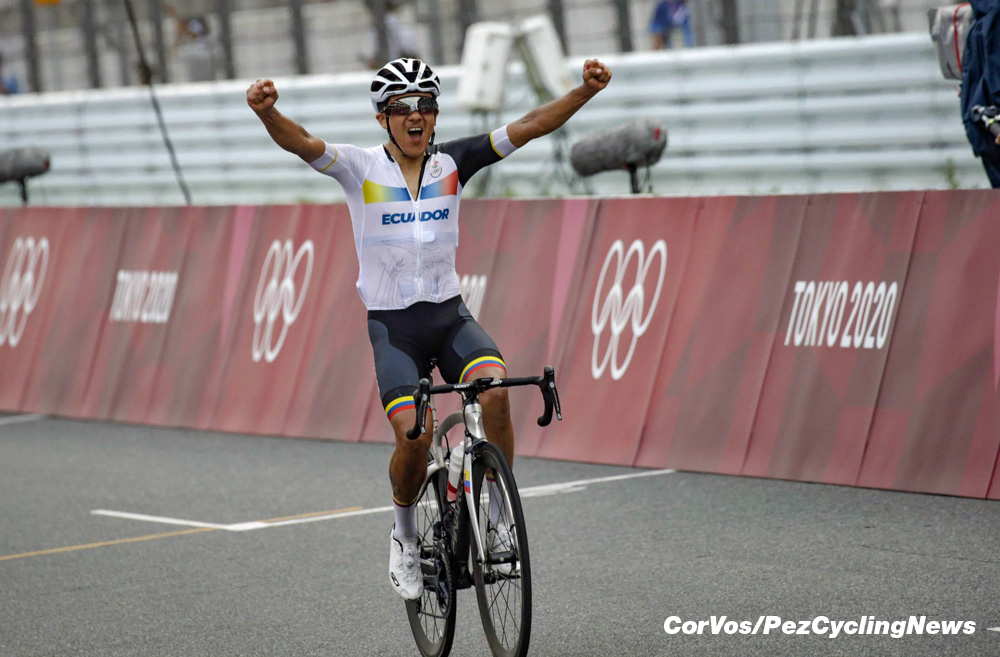 A stunning win for Carapaz