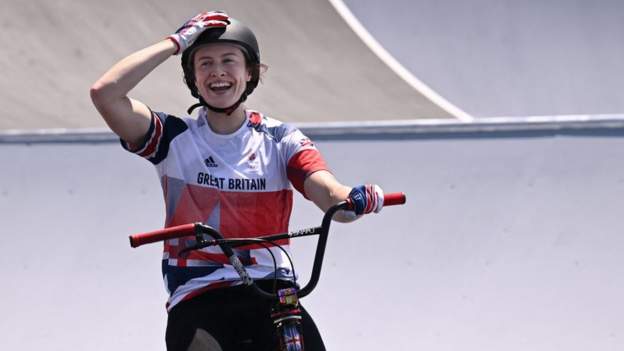 Great Britain’s Charlotte Worthington recovered from a fall on her first run to win a thrilling gold in the women’s BMX park freestyle Olympic final.

The 25-year-old, who gave up work as a chef to focus on the sport in 2017, delivered an action-packed score of 97.50 to snatch gold on her second run.

With no score of significance on the board after her fall, Worthington had to deliver on run two and she became the first woman to land a 360-degree backflip in competition – the same trick that left her on the floor during run one.

She celebrated her score wildly and then watched as four rivals – including hotly-tipped American Hannah Roberts – failed to usurp her sublime golden mark.

“It was incredible,” said Worthington when asked about the key 360-backflip.

“I’ve not been doing that trick for so long but we’ve been trying to find that big banger trick and when we did we thought, ‘this is the one’. If it wasn’t for Hannah Roberts we wouldn’t be doing these tricks or be this far.

“It’s a lot of hard work paid off. On the bike, yes, it’s physical hard work but I feel like the work on myself has paid off.”

Riders were ranked on their best score from their two runs and Worthington’s 97.50 transferred all of the pressure to Roberts, who appeared to be cruising to the title after she put up 96.10 on run one.

The 19-year-old American – who had thrown her bike in the emotion of completing her first run – could not finish her second 60-second stint on the Tokyo course and as the last rider to compete, her concession confirmed Worthington’s champion status.

Roberts, the winner of all three World Cup events in BMX freestyle’s last complete season in 2019 – looked shell-shocked at the turnaround and Worthington’s team appeared overjoyed at the upset.

“There was definitely a lot going on,” silver-medallist Roberts told BBC Sport. “My first run was good and I know there were places I could improve. I slipped up and hurt my ankle.