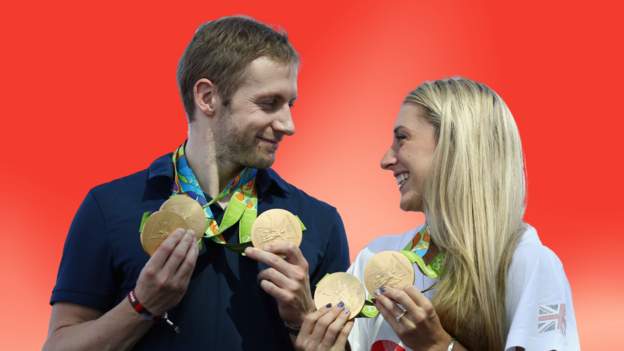 In the space of 20 minutes, Jason Kenny became Great Britain’s most decorated Olympian and wife Laura took silver on the same track, but arguably their proudest moment came a year earlier.

The two moments sum up the Kennys perfectly. They are two of the strongest track cyclists in the world and they are also the best parents they can be to Albie, who will be four in August.

And, as for any parent trying to find the sweet spot between chasing their dreams and raising their child, it does not always come easily.

“I have never missed you more little man,” Laura posted alongside an image of Albie watching her on television when she won team pursuit silver on Tuesday – the first time she has missed out on gold at the Olympics.

When it was announced that both husband and wife would represent GB in Tokyo, Laura said she “massively underestimated how hard it would be to juggle both being a parent and us both being athletes”.

As the 29-year-old was making her return to the sport after giving birth, an endeavour in which she was supported by fellow mum and Olympic champion Jess Ennis-Hill, she said she had to build her training around Albie rather than the other way round.

That challenge was made even more difficult by the coronavirus lockdown, meaning the pair could no longer rely on the support of grandparents to help care for Albie while they trained.

Toughness is what it took for Laura to return from a broken shoulder and arm sustained 18 months before the Games.

It is how Jason, 33, got back to being one of Britain’s best after taking a year away from the sport post-Rio.

And toughness has surely been required to do all of that while raising a toddler.

“Albie came along and it just changed everything,” Laura told the BBC before the Games.

“I just sort of relaxed a lot more. Every time I go home I just switch off. I always thought I wanted to be a young mum and I didn’t want to let it get in the way of my career.

“I wanted to prove to myself that I could do both.”

With a silver medal won in the team pursuit and two further chances to claim gold in the omnium and madison, Laura has more than proved her point.

She may yet become the first British woman to win gold at three separate Games and could be the team’s most decorated female Olympian if she reaches Charlotte Dujardin’s tally of six medals.

Dujardin has three gold, one silver and two bronze medals and as Kenny already has four golds and one silver, another medal of any colour would help her pass the equestrian rider.

Albie might make the logistics of finding time to train more complicated, but as she bids to make her mark in the history books he has also provided vital motivation.

“I’d never been injured before, certainly not to that extent,” she said of the injuries sustained in two major crashes in early 2020.

“It was the hardest couple of weeks in my career because I thought ‘why am I doing this?’ I do it all for Albie now. I’ve not sacrificed all this time with him for no reason.”

Jason has already chased down his record with the team sprint silver he won on Tuesday.

He now has eight medals in total and his six golds beat the five won by Bradley Wiggins, who also has eight in all.

According to data company Nielsen Gracenote, between them the married couple have won a third of all the gold medals claimed by Great Britain in the history of Olympic track cycling, and Jason has more chances to come too in both the individual sprint and the keirin.

Sir Chris knows what it takes to achieve such greatness but he never tried to do it while being a parent, instead waiting until he had retired to have children.

“It adds another dimension to the stress and difficulty that being a parent can bring.

“It balances it out with the joy you get from it and also the perspective. When you are lining up for an Olympic final, perspective is one of the things that can really help you cope with pressure.

“They complement each other. Jason’s calmness can settle Laura when she might get a bit nervous or worry about things too much. She drags Jason up and picks his spirits up. They live for their sport and for their little boy Albie.

“It just makes you so happy to see nice folk succeeding in life.”

Even their relationship has followed Olympic cycles. Laura took to Twitter to announce they were “dating” when they were caught kissing on camera at the London 2012 beach volleyball final.

They got married after returning from Rio 2016 and Albie was born a year later.

The pair are now adding a Tokyo chapter to their Olympic story and both Jason and Hoy believe there will be much more to come from Laura at Paris 2024.

Jason said before the Games his wife would “trump” any medal record he sets, adding it “would be short-lived”.

“In two or three Games’ time we will be looking back and Laura could have 10 gold medals,” Hoy agreed. “The best is possibly yet to come from Laura. I firmly expect Laura to be standing alone above Jason and above Bradley.”

And Laura may not even be the most successful Kenny, with Albie apparently well on the way in his cycling education.

“He’s got a lot of expectation,” joked Sir Chris.

“The poor lad has got a lot of pressure. He’s got to take up something entirely different.”