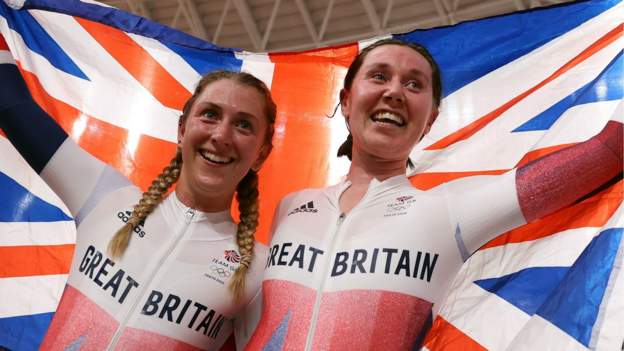 Laura Kenny became the first British woman to win gold at three Olympic Games as she and Katie Archibald were crowned madison champions in Tokyo.

The women’s madison was added to the Olympic programme for the first time at Tokyo 2020,

“I’ve never wanted to win a medal so much in all my life,” said Kenny, the most successful female Olympic cyclist.

“I messaged [husband and fellow GB cyclist] Jason and said I feel like my Olympics ends today. I love the team pursuit but I felt relief when it was over because this was the one race I wanted to win – I just feel so relieved.”

Archibald added: “I’ve been dreaming about having this conversation – I’ve never wanted something so much, I’ve never been so nervous but we’ve been so clinical with our approach.

“We had a change of coach last year for this event. We’re going for the all round and trying to spread between events and it feels so satisfying for it to come off.”

Archibald won World Championship madison gold in 2018 before she and Kenny teamed up for European silver in the event the following year.

But their performance in Tokyo was a masterclass in madison racing, winning the three opening sprints of the 120-lap, 30km race.

In total, they won 10 of the 12 sprints on offer and gained a lap – earning 20 points – alongside Denmark and the Russian Olympic Committee, who won silver and bronze respectively.

But such was Kenny and Archibald’s dominance that they finished with more than double the Danes’ points, Amalie Dideriksen and Julie Leth ending their race on 35 points while the ROC had just 26.

Dutch world champions Amy Pieters and Kirsten Wild finished off the podium, forced to settle for fourth after being involved in a crash.

Kenny’s gold was her first as a mother, having welcomed son Albie in August 2017.

“All week I’ve been saying please don’t ask me about Albie – I’ve never missed him so much,” she said.

“But I couldn’t do it without these girls. With Katie I feel like I’m racing with a sister – I’m so grateful to have her here and her support. I couldn’t have done it without her.”