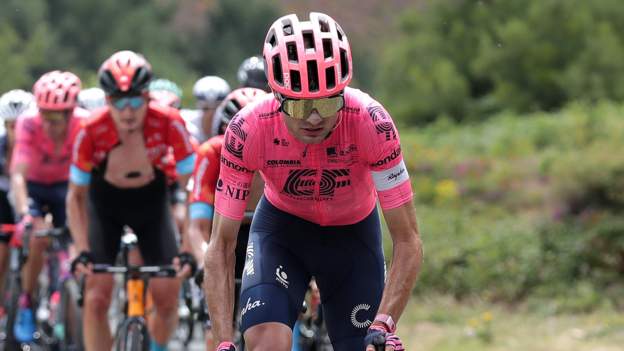 Simon Carr knows that you’ve probably never heard of him.

However, when the 22-year-old lines up at the Vuelta a Espana on Saturday, he’ll do so with the expectation that anonymity in Wales, the land of his heart, will soon be a thing of the past.

Carr has already completed a Grand Tour in his debut season but his unconventional path to the top has been a nomadic, isolated journey.

Not for much longer.

Born in Hereford and raised by Welsh parents in the south of France, Carr always felt conflicted when it came to his own fluid sense of identity.

“So generally I’d say I’m British because part of my family’s also from from England, but the majority of my roots are from Wales.”

Weighing in at less than 10 stone, Carr’s frame is perfectly suited for the high mountains.

Growing up in the shadow of the Pyrenees, near the city of Carcassone, has allowed him to hone his skills as a climber – initially on the French semi-pro system and more recently with the World Tour team EF Education-Nippo.

The British route to the top of the sport is a well-trodden pathway, however Carr is an outlier.

“I came through the French cycling system, never did any of the National Championships or anything like that,” he said.

“It seems like I’ve only really appeared on the radar now I’ve got to World Tour level and people are wondering who this British or Welsh kid is that they’ve never heard of before.”

It was Carr himself who reached out to Welsh Cycling to declare his availability for next year’s Commonwealth Games.

“I got in touch with the national coach, especially as the Games will be in Birmingham which is quite close to where some of my family still is,” said Carr.

“To be able to race for Wales would be really cool.”

Carr is one of five Welshmen competing at UCI World Tour level, but unlike Ineos’ Luke Rowe and Geraint Thomas, it is a Union Jack not the Welsh dragon that appears on his bike.

“In 2019 when I was racing amateur I made my own stickers that were 50/50, so they had the Welsh dragon and the Tricolore – the French flag,” Carr added.

Carr’s climbing ability will inevitably lead to discussions about his own Grand Tour potential.

“For a long time my goal was to win a single stage, because my thinking was that if I could get to that point, then I would have an idea of whether I could go into a general classification role,” he said.

“I think once I’ve achieved that I’ll have a better idea of if I’ve got the ability to go further.”

Carr now has the chance to test that potential in the Spanish mountains over the next fortnight – and perhaps stop people wondering who this Welsh kid is they’ve never heard of before.