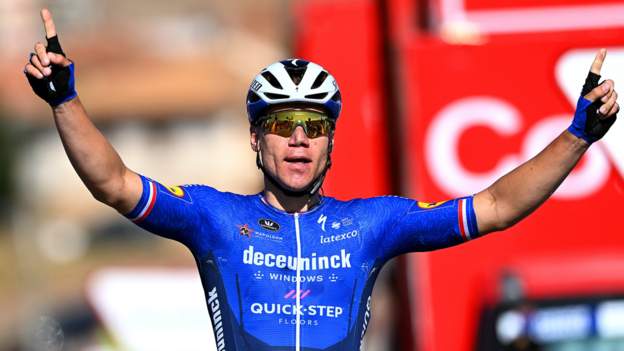 Fabio Jakobsen won his first Grand Tour stage since suffering serious injuries in a crash last year with a bunch sprint victory at the Vuelta a Espana.

The Dutchman, 24, held off Arnaud Demare and Magnus Cort to claim an emotional win on stage four in Molina de Aragon.

Jakobsen sustained severe head injuries at the 2020 Tour of Poland in a crash with Jumbo-Visma’s Dylan Groenewegen.

“After the crash it was a long way back, but I’m happy to be here. It took a lot of time and effort.

“This is also my family’s victory. They’re the reason I’m here.”

Jakobsen was put in a medically-induced coma after the crash and underwent several months of facial reconstruction surgery.

He returned to racing in April and claimed his first win since the horrific incident on stage two of the Tour de Wallonie in July, also winning the fifth stage of that race.

Jakobsen won two stages of the Vuelta in 2019.

His win on stage four of this year’s edition also saw him claim the green points jersey.

Overall race leader Rein Taaramae crashed late on but remains at the top of the general classification standings because his fall happened in the last 3km of the stage.