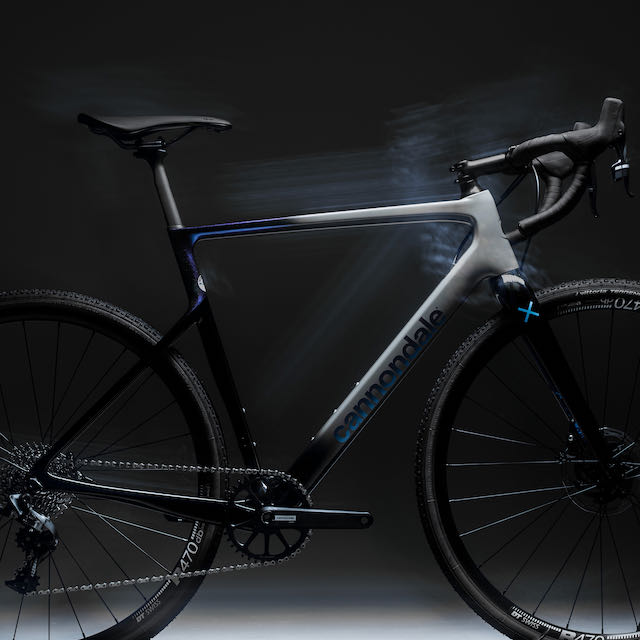 The hashtag (you know what one) is making its rounds across the social media platforms, which can mean only one thing — new bike season! Cyclocross bikes have evolved in recent years, and the trend isn’t all-out race-ready. It’s compliance, concentrating on a broad user base, taking these once only-race machines into the year-round territory and beyond.

That’s what Cannondale did when they christened its newest cross/gravel creation, the all-new Super Six EVO. We’ve seen this bike in spy shots under Ted King and the Cannondale Cyclocross World team rolling them in the mud in Belgium, but we never got the clarification of what the frame actually was — until now.

The new Super Six EVO CX/SE is a chameleon with the ability to perform well in the mud of Hoogerheide and the plains of Montana, plus it could free up some space in your bike stable.

How did Cannondale do this? Through calculated moves on frame design and working directly with athletes like Curtis White, Lachlan Morton, Alex Howes, and Ted King (to name a very small few). Feedback and rounds of product testing with athletes from the gravel and cyclocross world led Cannondale to alter one of the best cross bikes — the Super X and EVOlve it into the all-new Super Six EVO CX/SE.

The frame design is strikingly similar to the Cannondale Super Six EVO road bike, like double take similar. The current Super Six Evo has proven excellent on the pavement as well as the cobbles, Cannondale is out to prove the design is at home on even rougher terrain. The frame design may look similar but there is much more compliance and a bit of extra movement from the new dropped SAVE seat stays.

The compliance is partly from sculpted carbon in hyper-focused areas to achieve the maximum amount of “micro-travel” along with vibration dampening. The speed freaks love it for its super slippery design and clean aesthetic. The ‘cross racers love it for the responsive ride and the ability to take the sting off of a harsh riding course.

Dropping the seat stays was huge and drastically changed the look of Cannondale’s iconic ‘cross frame but gave the ride a comfortable feel that was quickly embraced by those on early samples.

The frame also receives the KNOT Seatpost of the Super Six EVO. It may seem trivial, but this new Seatpost design is 35g lighter than the current 25.4mm SAVE Seatpost. The savings come from the integrated internal KNOT Seatpost binder, the same weight as an external SAVE 25.4mm design. The KNOT post is more aerodynamic than the previous version, and we all know, the more aero, the better.

The new Super Six EVO CX/SE geometry isn’t the full-on gravel mode that we expected. The frame does have a bit of a slacker seat tube angle. The most significant update (besides the dropped chainstays) is the massive amount of tire clearance. The SE version comes stock with 40mm tires and boasts room for even larger — up to 45mm with wiggle room. This tire accommodation is a massive upgrade for those looking to use the bike, not only for a season of cowbells and mud but for wide-open gravel roads or off-season road training. The wide tire clearance isn’t only a tire width deal. The Cannondale Cyclocross World Team will be pleased about less frozen mud accumulation when they hit the winter Euro block of racing.

Cannondale achieves this massive tire clearance by utilizing the same 142x12mm rear hub that most (all) modern drop bar bikes use but offsets the entire drive train by 6mm and the rim to match. The rear spacing is still the same System Integration (SI) as the previous models. This process requires the rim to be re-dished (only aftermarket wheels) and can be troublesome for some non-SI frames users that like to swap wheels.

The EVO CX/SE boasts slick internal routing with Cannondale’s neat Switchplate design — allowing for electronics, integration with KNOT stems, and virtually any type of cable/electronic combo. The frame also receives the same internal routing updates as the Super Six EVO road bike. The bottom bracket is a PF-30-83 Ai, similar to the one used on the Super Six EVO Road. The bottle cage mounts include three mounting bolts to adjust the position based on your riding needs. All in all, the updates are improvements and take this classic bike to territory beyond the tape and planks.

The Super Six EVO CX build is a classic workhorse with the ability to perform at the top of the class. The build — and we mean single build, is a SRAM Force 1X group with mostly alloy (excluding the KNOT Seatpost) and solid gear that can take the proper beating of an entire ‘cross season.

The nice thing about the spec is there isn’t much to think about; it’s a super solid build and race-ready — tubeless Vittoria Terreno Mix tires and all. We have one coming shortly for review, so expect a full rundown of everything this ride can do.

The Super Six EVO SE is a bike that will serve the needs of the gravel crowd but have enough full-on speed that it will eventually be on the ‘cross course. The Super Six EVO SE comes with a mix of practical and luxury; SRAM Rival AXS 12-speed, DT-Swiss CR-1600 wheels with DT-350 internals, and a SRAM Rival X-Range crankset — 46/33T combo.

The frame is the same geometry as the Super Six EVO CX and arrives with the same KNOT Seatpost, speed release thru-axles, and PF-30Ai bottom bracket. The most significant difference is the 2X build and the 40mm Vittoria Terreno Dry tubeless tires that arrive on it. The Super Six EVO SE frame is available in two different color schemes; Cool Mint and Meteor Grey.

This is the biggest question for anyone buying a bike right now, “is it available” and yes, the Cannondale Super Six EVO CX/SE bikes are shipping and should be at your local Cannondale dealer. If you’re looking to have one before “15 seconds”, we suggest calling your shop ASAP. For more info check out Cannondale.com