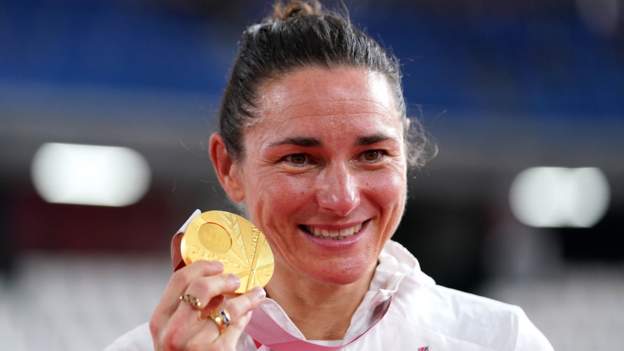 Sarah Storey put in another world record-breaking performance on her way to claiming her 15th Paralympic title, as Great Britain claimed six medals on the first day of Tokyo 2020.

The 43-year-old smashed her world best by more than four seconds in the C5 3,000m individual pursuit qualifying and in the final caught team-mate Crystal Lane-Wright, who matched her silver medal from Rio 2016.

Storey is just one behind Mike Kenny’s British record of 16 golds.

There was also silver for tandem pair Steve Bate and Adam Duggleby in the B 4,000m pursuit.

Bate and Duggleby were defending champions but the Dutch pair of Tristan Bangma and Patrick Bos, who set a world record in qualifying, caught the Britons in the final.

And there were three swimming medals for ParalympicsGB, with silvers for Reece Dunn in the S14 100m butterfly and Tully Kearney in the S5 200m freestyle, as well as bronze for Toni Shaw in the S9 400m freestyle.

The opening day belonged to Storey though. After her blistering qualifying race, she started the final at at the Izu Velodrome in determined fashion and caught Lane-Wright after 1,750m of their race.

She has now won medals at each of the eight Games she has attended and her heat time of three minutes 27.057 seconds destroyed the world record she set in Rio.

“It’s quite overwhelming,” she said. “I don’t know if it will sink in until I get home. I came here with a really solid plan of what I wanted to do and I’ve delivered it, so it kind of blows your mind a bit.

“I talked before about breaking your personal best, in my case a world record, a small margin at a time. And I just knocked 4.3 seconds off.

“I’ve done so much training, and everyone’s been reminding me how much work I’ve done and how I deserve to be that fast, but you don’t like to presume. So it took me by surprise, but a good surprise.

“I think about one race at a time and maybe I’ll think about these things afterwards. But it does feel pretty surreal.”

Storey, who was born without a fully functioning left hand, started her career as a swimmer at Barcelona in 1992 and competed at four Games, winning 15 Paralympic medals, including five golds, before switching to cycling in 2005.

Since then, the mother of Louisa (8) and Charlie (3) has been almost unbeatable both on the track and the road.

“It’s been an incredibly difficult preparation for these Games because it’s so different to what I’m used to. I just had to call on all my experience for staying calm under the pressure and I’m just glad it’s paid off.

She next goes on Tuesday in the C5 road time trial – another event where she is defending champion – before the road race on Thursday, 2 September.

For Lane-Wright, who also set a personal best in the heats, it is the second silver medal at consecutive Games in the event.

“I don’t think I’ve reached my full potential. I think I can keep getting better,” she said. “As much as I’m up against Sarah, it’s me against me. I can only control what I can do. To get such a good PB this morning, I’m so pleased.”

As well as the action in the velodrome and the pool, there was GB representation in four other sports on the opening day

The wheelchair rugby team were 50-47 winners over Canada in Pool B but there was a big shock in Pool A where defending champions Australia lost 54-53 to Denmark.

The women’s wheelchair basketball team paid the price for a disappointing third quarter against Canada as they lost 73-54.

GB led 29-26 at the break but their opponents pulled clear in the second half and they will now have to focus on their next game against hosts Japan on Thursday.

Strictly Come Dancing star Will Bayley, world champion Ross Wilson and Aaron McKibbin all made winning starts to their table tennis campaigns but there was no joy for Piers Gilliver or Gemma Collis-McCann in the sabre events at the wheelchair fencing.