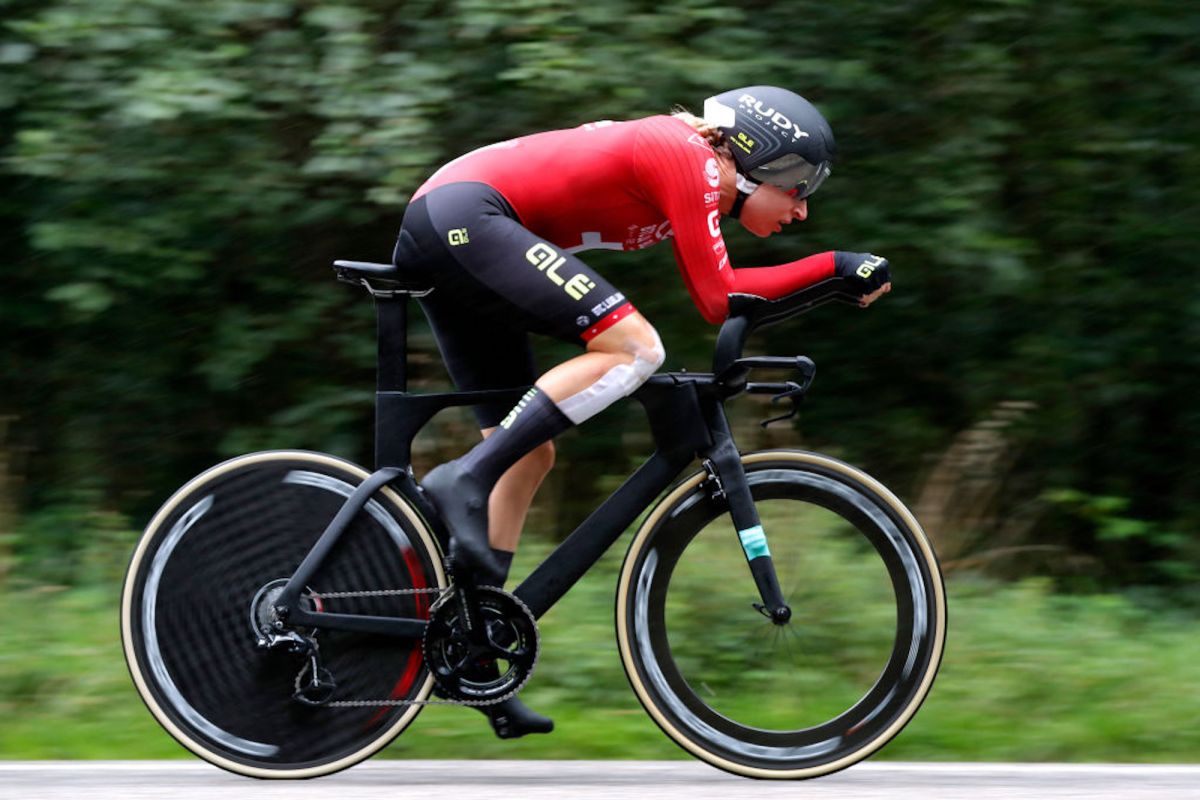 Riding for Alé-BTC Ljubljana, the Swiss time trial champion caught her minute woman on the line, setting a time of 20-41, which was then 1-18 faster than the previous best.

Former world champion against the clock, Ellen van Dijk took the race to the Swiss rider, pushing a massive gear, but was unable to get on terms, finishing second, 18 seconds down. And, though she has always been strong against the clock, Chantal van den Broek-Blaak’s third place was perhaps a surprise, the SDWorx rider clocking 21-22.

The result sets up a fascinating final three stages, with Reusser leading the general classification by six seconds from Van Dijk, whose Trek-Segafredo team is stronger than Alé-BTC Ljubljana. With bonus seconds at intermediate sprints and on the finish line, victory remains a possibility for the Dutch rider.

Surprisingly for such a powerhouse, the win was Reusser’s first at WorldTour level, and other than national and European championships, only her second UCI race victory.

Having come to the sport later in life, racing her first UCI event only in 2017, 29 year-old Reusser’s career has been on a steep upward trajectory in the past 18 months. Last year she took third in the European championships, before proving the performance was no fluke with second at the World Championships in Italy. Her silver medal in Tokyo proves she is now up there with the best against the clock and is truly one to watch.

First off the ramp was Alé-BTC Ljubljana’s Anastasia Chursina clocking 11-29 at the intermediate check point, before finally stopping the clock in 23-02, though that was quickly eclipsed by Britt Knaven (NXTG Racing), the Belgian putting nine seconds into the Russian in the second half of the course.

Having set a new fastest time at the intermediate Brodie Chapman (FDJ-Nouvelle Aquitaine Futuroscope) briefly took the lead, but was eclipsed by the Danish rider, Julie Leth (Ceratizit-WNT) who set a time of 22-09.

Fresh from racing the Olympic Madison, Leth started 24th of the 90 starters and her time remained at the top of the standings for half an hour, when Australian, Sarah Roy (BikeExchange) took the lead, finishing fractions of a second sooner, her average speed only 1/1000th of a second faster.

With rain falling lightly on parts of the course, one of the year’s revelations, Demi Vollering (SDWorx) set a new fastest time, putting 10 seconds into Roy with a time of 21-59. However out on the course Reusser had set an intermediate time of 10-30, 37 seconds better than the previous best and fully justifying her pre-race favourite’s tag.

As she approached the line the Swiss caught her former team mate Emma Norsgaard (Movistar), the Danish rider briefly moving into second place with 21-42.

Armed with the knowledge of Reusser’s time, Ellen van Dijk pushed a huge gear on the tailwind outward leg, and crossed the intermediate time check only 12 seconds behind, though she eventually lost six more seconds on the way home.

Though she may be the best ever at everything else, Marianne Vos (Jumbo-Visma) has never been known as the best time triallists, and she finished 16th, 1-45 down and her chances of a fourth overall victory are all but gone.

The best British rider was Alice Barnes, the national champion holding third place with a time of 22.11, taking her into ninth place, though she is now seventh overall and one of two Canyon-SRAM rider in the top-10.

Friday’s third stage sees the race tackle a 120.3km course between Stramproy and Weert, and while it is flat enough to suggest a bunch kick with little GC action, the breakaway has a good recent record and the sprinters will need to be attentive.