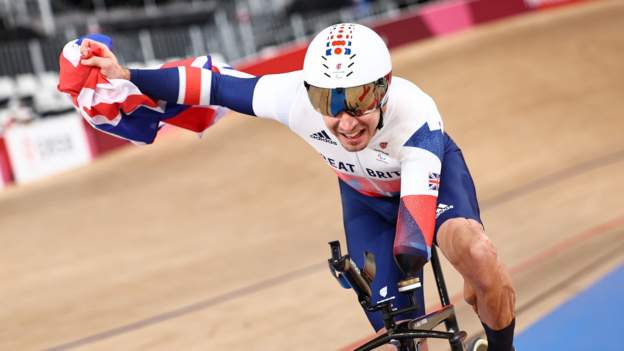 “At this very moment in time, this is at the top. It’s the best thing I’ve done.”

August 2021 is a month to be remembered for all the right reasons. The month Jaco van Gass became a Paralympic champion.

But rewind the clock back 12 years, to August 2009, and Van Gass was fighting for his life. He had been hit by a rocket-propelled grenade (RPG) while serving in Afghanistan, losing his lower left arm, puncturing internal organs, and suffering a collapsed lung, shrapnel and blast wounds, and leg fractures.

So his statement that his C3 3,000m individual pursuit is the best thing he’s done can be taken at face value. An astounding achievement.

But this, a Paralympic gold, was what he wanted more than anything.

“I have done some amazing stuff and they all have their difficulties. Today was very tough. This is definitely up there,” the 35-year-old said.

BBC Sport first spoke to Van Gass in January 2020. In that interview, he said: “It took some time to convince myself that everything would be all right, there were times that I did wonder why I was still alive and wished I was actually dead.

“But you recognise that there must be some reason why you have survived.”

This is his story.

‘I died twice on the operating table, now I’m at the Paralympics’

Born in South Africa, the 20-year-old Van Gass sold all of his possessions and moved to the UK to enlist in the British Army.

He signed up to become a paratrooper, and was one of only 22 – of the 108 who started – to pass P Company. In 2008, he completed his first tour to Afghanistan before returning a year later.

Two weeks before the end of that tour, Van Gass’ platoon was deployed on one of their last operations on the eve of the Afghanistan elections.

“We got intelligence that an IED (improvised explosive device) facilitator was planning to disrupt the elections,” Van Gass explained. “We went after this guy and caught him, the potential suicide bombers and their equipment.

“On the way back into the desert where the helicopter was to pick us up, a call came over the radio that the pilot wasn’t happy with the landing site and so he gave us coordinates for a new pick-up point. The first pick-up point was a proven route, but the second one wasn’t.”

As part of a two-man sniper team, Van Gass was carrying a set of telescopic ladders attached to his backpack. Everything was happening under the cover of darkness. The clock having ticked past midnight, it was now his 23rd birthday.

“About half an hour into the walk, we came across what was only later established as a Taliban stronghold. We saw a few guys patrolling, we confronted them and conducted some searches but a few shots were fired from a different firing point.

“This initiated quite a big fire fight, and about 40-45 minutes in, two RPGs were fired. The first one exploded in the distance but the second one was fired low and ricocheted off the ground. At this stage, I was covering my sniper partner, and while he was putting on a fresh magazine, this rocket hit me.

“As I twisted my back, the rocket hit [the ladders] and that initiated the explosion. I knew I had lost my arm. I was in a pretty bad way.”

Van Gass was flown home to the UK, where extensive rehabilitation followed. In total, he had 11 operations on his injuries.

His military career now over, Van Gass found himself in need of a new challenge. That came in the form of a charity trek to the North Pole, Van Gass one of a four-man team of injured soldiers who took on the unsupported challenge in aid of Walking With The Wounded. They completed the 190-mile trek in 13 days, joined for four of those by Prince Harry.

And Van Gass hasn’t stopped since. This is a man who always needs a challenge in front of him, something to give him a purpose and a focus in life.

“It’s amazing – having been where I’ve been, having died twice on the operating table, never knowing when I am going to walk again, let alone run again,” he told Channel 4.

“And forward on and I am at the Paralympics. I had so many people supporting me, backing me, believing in me. If I can inspire anyone to do the same, if I can help someone then that’s incredible.”

‘This is a summit of a different kind’

Van Gass attended the 2012 Paralympics as a fan, and sitting in the velodrome, he was “amazed” at what he saw. That started his own journey towards the Games.

After missing out on the squad for Rio, the now three-time world champion made it to Tokyo – fulfilling a challenge he set himself many moons ago.

In qualifying on Thursday morning, he watched on as team-mate Fin Graham smashed a seven-year world record by almost seven seconds, before taking to the boards himself and shaving off another two seconds.

An all-British final was set, a medal already guaranteed for Van Gass in his very first Paralympic event, but what colour?

It was soon decided, Van Gass crossing the line more than a second quicker than younger charge Graham to finally see his dream become a reality.

“It’s been a fantastic day. I’ve worked very hard for this. It’s nearly nine years of a lot of ups, probably more downs,” he said.

“It’s such a relief to finally be here representing Great Britain in Tokyo and coming away with the top prize.”

But this won’t be the last we see of the keen mountaineer in Tokyo. He’s got four more events to come, starting with the C1-3 1000m time trial on Friday – so keep the champagne on ice for now.

“This is a summit of a different kind but we’re very happy to reach it,” Van Gass said.

“We’re at the top now but getting to the top is only halfway – you’ve still got to come down, and we still have other races to give our very best in.”