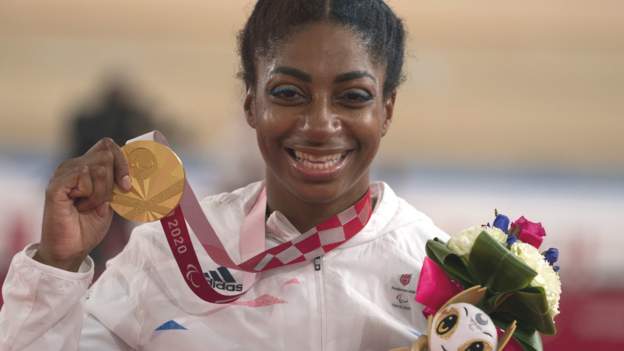 The 30-year-old, who won cycling and athletics gold at the Rio Games, knew she had to beat the time of 35.830 seconds set by Canadian world champion Kate O’Brien to win Britain’s seventh gold of the Games.

“I knew I was going to have to do something special, and that if I put everything together that me and my coach had worked on, it would be amazing,” she said.

“I executed a race that was near-perfect – I’m so happy.”

In the pool, Hannah Russell and Reece Dunn both landed gold on another successful day for British swimmers.

Russell held off the challenge of Russian Daria Pikalova to retain her S12 100m backstroke title.

Dunn, who finished second in the S14 butterfly on Wednesday, won his first Paralympic gold in the S14 200m freestyle.

There was also a bronze for Stephen Clegg in the men’s S12 100m backstroke.

Earlier in the velodrome, Britain’s Jaco van Gass claimed his second medal of the Games with bronze in the C1-3 1000m time trial.

The pursuit gold medallist set a new world record in his C3 category, but it wasn’t enough for victory.

There were also bronzes on day three for the men’s wheelchair fencing epee team of Piers Gilliver, Dimitri Coutya and Oliver Lam-Watson, sprinter Maria Lyle in the opening session of the athletics competition and for powerlifting debutant Olivia Broome.

It was a second medal of the Games for both Gilliver and Coutya and a first for Lam-Watson on his debut.

Broome’s team-mate Ali Jawad finished sixth in the men’s -59kg event after a build-up where his training was not only affected by Covid-19 but also by the Crohn’s disease which he deals with on a daily basis.

Cox goes again in Saturday’s team sprint alongside Van Gass and Jody Cundy before switching sports and aiming to retain her T38 400m title on the athletics track next Saturday.

After having a stroke in 2014, she was then diagnosed with multiple sclerosis and had to rebuild her sporting career.

After her Rio heroics, where she became the first Briton to win two golds in different sports at the same Paralympic Games in 28 years, she has had to deal with a number of injuries and has had issues with what she referred to as “disordered eating”.

The Tokyo heat has also presented her with a big challenge.

“I’m heat intolerant and it is tricky out here” she said. “It has affected my muscle spasms and my speech.

“It’s a little bit of a struggle and it will take me a bit longer to recover, which hopefully isn’t too long because I’ve got another race tomorrow.”

Cox, who says that she has spent most of her time travelling between cycling training in Manchester, athletics training in Loughborough and family in Leeds, is feeling the support of her network of family and friends who have been unable to travel to support her, plus her Christian faith.

“It’s been completely different, she’s not had any of us with her,” her sister Carmel Williams told BBC Breakfast.

“We’re such a strong family, so to not have any of us with her is a big thing.

“So just providing that support, we’ve sent her loads of videos, just so that she can feel that she has our support, which obviously she does. She was watching them before the race to help her focus – and she won, which was great.”

Other Britons in action

Jack Hunter-Spivey (class 5) and Tom Matthews (class 1) are guaranteed medals in the table tennis after reaching the semi-finals.

The wheelchair rugby team, who were already guaranteed a semi-final spot, lost 50-48 to the USA in their final pool game and will face Japan in Saturday’s semi-finals (06:15).

On the opening day of action in the rowing, Britain’s Lauren Rowles and Laurence Whiteley set a new Paralympic best to reach Sunday’s final of the PR2 mixed double scullst, while the PR3 mixed coxed four also did the same.

However, Ben Pritchard in the PR1 men’s singles sculls will need to finish in the top two in Saturday’s repechage to get into the final.

Archer Jess Stretton set a new Paralympic record to top the rankings in qualifying for the women’s compound open event.

But the men’s wheelchair basketball team suffered a disappointing 71-59 loss to Germany with player-coach Gaz Choudhry top-scoring on 14 points.