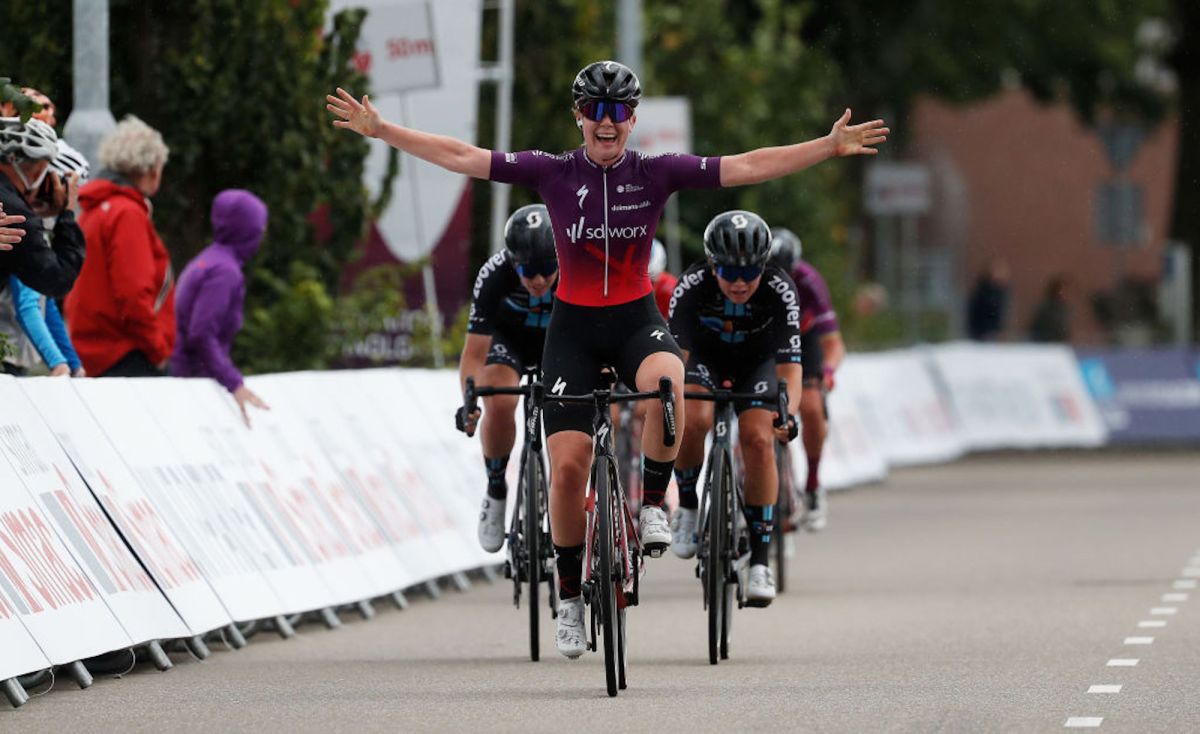 Dutch rider Lonneke Uneken took a first Women’s WorldTour win after a huge crash took out most of the Simac Ladies Tour peloton on stage three.

The young SD Worx rider was part of a six-woman group which emerged from the carnage to contest the final, and included three of her team-mates.

Marlen Reusser (Alé-BTC Ljubljana), who led at the start of the day, finished 31 seconds down, a second behind Ellen van Dijk (Trek-Segafredo) her closest challenger before the start, and retains the overall lead.

However, the Swiss woman retains the overall lead, despite another SD Worx rider, Chantal van den Broek-Blaak finishing fourth on the stage, moving her into second overall, 10 second off the overall lead.

It was a tightly controlled race throughout, with the sprinters’ teams, wary after missing out to the breakaway both at the recent Ladies Tour of Norway and on stage one in the Netherlands, unhappy about any escapees.

With a lone breakaway rider caught and the race on narrow roads, SD Worx were leading the way in the final 10km, with DSM tight on their wheel when the latter team’s sprinter, Lorena Wiebes slipped off the tarmac and went down, causing a huge pile up, blocking the road.

Though the race was now in the Netherlands’ south east where the terrain is slightly more undulating, the third stage was hardly hilly, with only some minor undulations punctuating the route.

The day began in the small village of Stramproy, finishing by way of a series of convoluted loops about 10km away in the town of Weert, though after some 125.9km of racing. And while the terrain suggested a bunch kick, recent breakaway successes and the threat of crosswinds were set to have an influence the pace high throughout.

After winning the stage two time trial, Swiss woman Marlen Reusser began the day with an overall lead of 12 seconds, and with her Alé-BTC Ljubljana team-mates monitoring the front of the race, no one seemed willing or able to attack.

With 40km gone Femke Markus (Parkhotel Valkenburg) made an effort to get away, before a group of 15 got a gap some 15km later, though even they were caught as the race approached the final 50km and an all important bonus sprint, 32km from the line.

After Trek-Segafredo’s young Italian Letizia Paternoster crashed hard just ahead of some road furniture, the race exploded into a flurry of attacks, multiple teams and riders trying to get away causing the pace to lift significantly even more.

With none of the GC contenders taking bonus seconds at the intermediate sprint, a lone rider was allowed up the road, promising 18 year-old Daniek Hengeveld (GT Krush-Tunap) gaining a slim advantage.

A similar move had seen the Dutch rider come close against the big guns early in the season, and the bunch were in no mood to allow her to build a significant gap, DSM and Valcar Travel and Service taking responsibility for the chase.

However, a brief truce in the peloton saw teams looking at each other and Hangeveld eke out her advantage, but though she was out front for 13km she was caught, 15km out, Trek-Segafredo closing her down.

From there on in the pace remained high as those squads intent on a sprint held position at the front until the crash changed the race.

>>> Mathieu van der Poel will not race Benelux Tour, team confirm, but should recover in time for Worlds and Roubaix

Saturday’s penultimate stage sees the race remain in the southern Dutch province of Limburg, the peloton tackling 148.9km between Geleen and Sweikhuizen. With four accents of the Watersley climb, a bunch kick is far from a certainty.