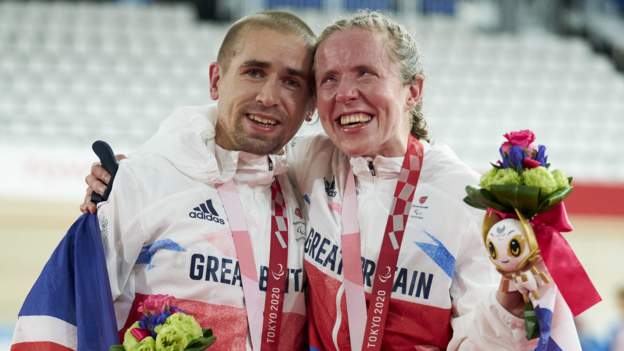 Neil Fachie said it was “beyond our dreams” after he and wife Lora both won Paralympic cycling gold within the space of 16 minutes.

The Fachies’ success was part of a superb Saturday for the Great Britain team that brought seven gold medals overall.

Neil and pilot Matt Rotherham smashed their own world record to beat team-mates James Ball and Lewis Stewart for gold in the B 1,000m time trial.

They surpassed their old time of 59.278 seconds with a new mark of 58.038 to give Neil his second Paralympic gold after he won with Barney Storey at London 2012.

The pair qualified fastest for the final, also setting a world record, and finished just under two seconds ahead of Ireland’s Katie-George Dunlevy and Eve McCrystal in the final, with Britain’s Sophie Unwin and Jenny Holl winning bronze.

In the final track cycling event of the Games, there was victory in the mixed team sprint with Kadeena Cox and Jaco van Gass winning their second titles in Tokyo and Jody Cundy claiming his eighth career Paralympic success.

The team had qualified second-fastest for their decider where they took on China and after Cox put in a blistering opening lap to give them a narrow advantage, first Van Gass and then Cundy kept the pressure on to win by 0.106secs.

There was also a second gold medal for swimmer Maisie Summers-Newton as she followed up Thursday’s SM6 200m individual medley success with victory in the SB6 100m breaststroke final, with team-mate Ellie Simmonds fourth.

The S14 4x100m freestyle relay team of Reece Dunn, Bethany Firth, Jessica-Jane Applegate and Jordan Catchpole then won the inaugural staging of the event at a Paralympics.

Sharing the moment together

Neil and Lora had experienced mixed fortunes at London 2012 and Rio 2016 with Tokyo the first Paralympics where both made the top step of the podium.

Neil, 37, started his career as a sprinter in Beijing before switching to the bike and winning a gold and silver in London and silver in Rio. Lora, 32, failed to win a medal in London but along with Hall claimed gold and bronze four years later.

“There are days that are good in the relationship and there are days like today which we’ll never forget,” Neil told BBC Breakfast.

“We knew this day would be our big one. It was the same in Rio: Lora got the gold, I got the silver. Back in London, I got gold and Lora missed out.

“Of course we’re happy for each other but when you’re the one who wins, it’s harder, because you know how much the other one is hurting.

“So finally we’ve managed to both do it together, and to both break the world record as well is beyond our dreams.

“We hoped this would happen, but for it to actually come together is mind-blowing.”

Lora was born with a hereditary eye condition and lost her sight when she was five – she had to leave guide dog Tai at home while she travelled to Tokyo.

Despite her sight loss, she is a keen cook and in her spare time writes a food blog.

“We want each other to win but it doesn’t change anything if we don’t. It was great to see Neil go and do an absolutely cracking time,” she said.

“It’s a lot more stressful watching someone you care about racing than actually doing it yourself.”

While Neil’s Paralympic programme is at an end, Lora goes again in Tuesday’s tandem road race and Friday’s time trial.

The British wheelchair rugby team reached their first Paralympic final with a thrilling 55-49 victory over hosts and world champions Japan and will face the USA on Sunday (10:00 BST) after they beat reigning champions Australia 49-42.

Elsewhere, defending table tennis class 7 champion Will Bayley is guaranteed at least a silver after saving match point to beat China’s Liao Keli 3-2 and reach Sunday’s final. There are bronzes for Tom Matthews (class 1), Jack Hunter-Spivey (class 5) and Paul Karabardak (class 6), who all lost their semi-finals.

Mickey Yule, who lost his legs while serving with the British Army in Afghanistan in 2010, took bronze in powerlifting’s -72kg event.

And wheelchair fencer Dimitri Coutya won his third bronze medal – this time in the foil B event.

The women’s basketball team got their first win of the tournament with a 75-38 victory over Australia to secure a quarter-final place. A late Harry Brown free throw gave the men’s basketball team a 64-63 win over defending champions the USA to make it two wins out of three in the group stages.

Snyder was blinded in September 2011 after stepping on an explosive device while serving in the US Navy in Afghanistan. A year later, he won two golds and a silver in swimming at London 2012.

He followed that with three golds and a silver in Rio before switching to Para-triathlon in 2018 and he and guide Greg Billington beat their Spanish rivals by 55 seconds.

New Zealand’s shot putter Lisa Adams made a big impact with gold on her Paralympic debut.

Adams is coached by her sister Valerie, the four-time Olympic medallist, and her best throw of 15.12m in the F37 event ensured the family claimed more silverware.

And one of the stars of the Netflix film Rising Phoenix, wheelchair fencer Bebe Vio, retained her foil B title.

The Italian contracted meningitis aged 11 and had both of her forearms amputated as well as both her legs at the knee.