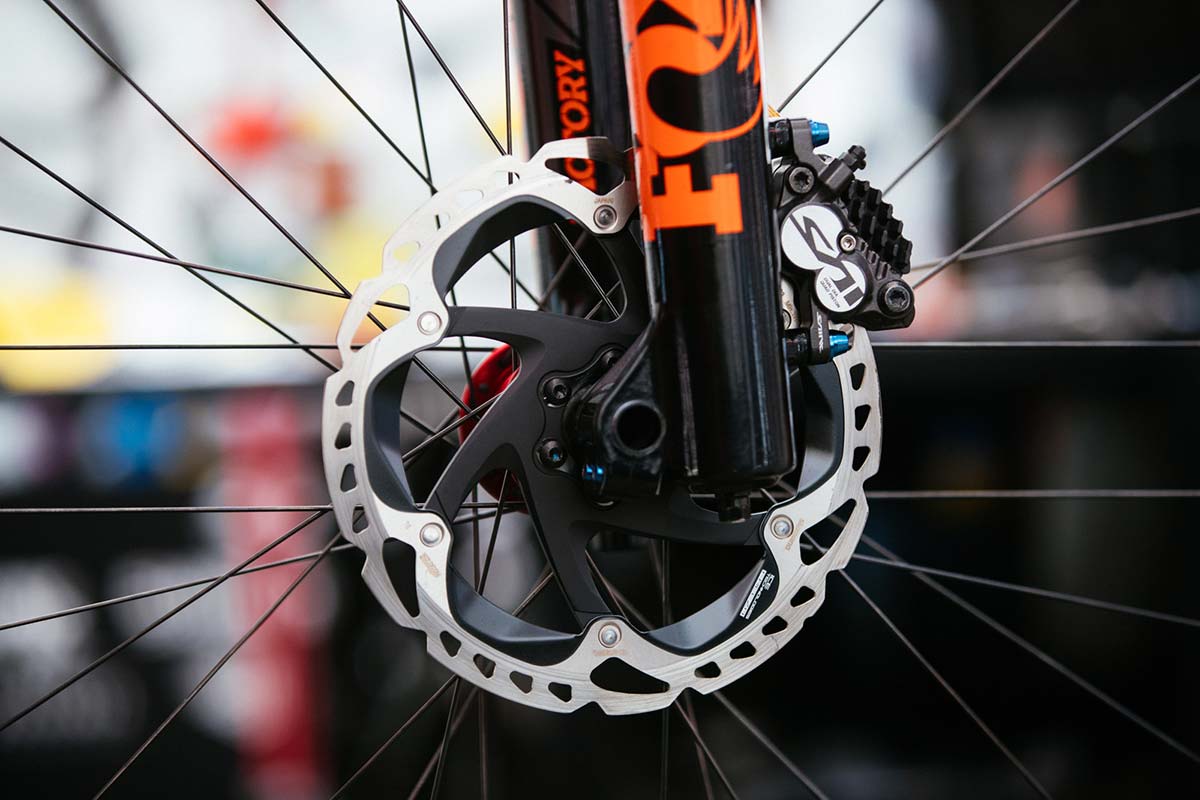 Until now, Shimano’s Ice Tech FREEZA rotor technology has only been available for centre-lock hubs. The additional aluminium radiator fins that extend from the three-layer construction at the rotor braking surface serve to significantly improve heat dissipation. Shimano’s data shows a FREEZA rotor will run at an average temperature that’s 40°C lower than same size Ice Tech rotor which lacks the fins. Now, the Shimano RT-MT905 brings that technology to the 6-bolt standard, a far more popular choice for enduro and downhill. Of course, though center-lock is more Shimano’s thing, being the inventors of it and all, they’ve offered 6-bolt rotors for a long time too. Noting that a larger diameter rotor offers improved heat dissipation, Shimano made available a larger 220mm stainless steel rotor option for centre-lock and 6-bolt hubs earlier this year (SM-RT64 and SM-RT66, respectively).

Shimano’s Ice Tech and Ice Tech FREEZA rotors have much better heat dissipation characteristics than the standard stainless steel rotors, though. That’s thanks to the three-layer construction seen at the braking surface. One the Ice Technology rotor, a thin layer of aluminium is sandwiched by the stainless steel braking surface, helping to keep temperatures down.

On the Ice Technology FREEZA Rotor, Shimano take that a step further, extending the central piece of aluminium out to form fins that extend inwards towards the middle of the rotor. Shimano say this technology means riders won’t need to up size their rotor, or switch to thicker, heavier rotors in order to prevent excessive heat build up.

Until now, that FREEZA Technology has only been available on centre-lock rotors. Now, with the new RT-MT905 rotor, riders of 6-Bolt hub wheelsets can also benefit from the 150°C reduction in heat build up (as compared to standard stainless steel rotors). That’s with the high heat dissipation paint on the fins that you see on Dura-Ace and XTR level rotors.

The Shimano RT-MT905 rotors have been tested all season long in the capable hands of the Rocky Mountain Race Face and Santa Cruz Syndicate race teams, proving the Ice Tech FREEZA technology performs for riders at the top end of our sport. Benefiting from the new rotors last weekend was Greg Minnaar, your 2021 DH World Champion.