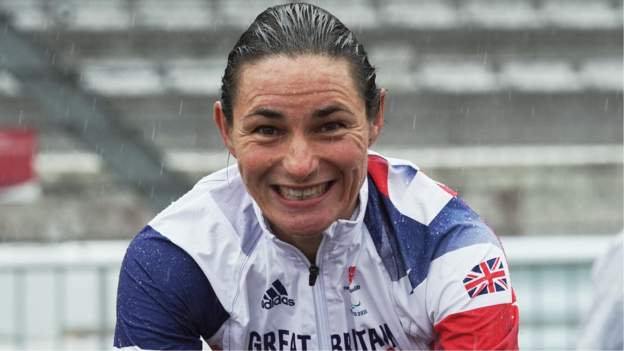 Sarah Storey may now be Britain’s most successful Paralympian but the mundane tasks still require ticking off.

Celebrations are needed but so too are name labels in school uniforms. Keep the bubbles on ice, Storey will be picking up a needle and thread before she picks up a glass.

“I can have some champagne after so I don’t stab myself or put them in wonky,” she says.

On Thursday, Storey secured her 17th gold medal, winning the women’s C4-5 road race in Tokyo to break Mike Kenny’s long-standing record. At 43, and at her eighth Games, no British Paralympian has won more.

“I don’t know if it’s sunk in. It’s something everyone has been talking about since Rio when it became a mathematical possibility with me doing three more events in Tokyo,” Storey told BBC Radio 5 Live’s Paralympic Breakfast.

“I just feel immensely proud and also immensely grateful to have so much support and to have such a great team around me and also a great team back at home. They’re the ones who are able to make this possible, by putting me on the start line in a position to go for it, so I’m a little bit lost for words in many ways.”

That team back home includes husband Barney, daughter Louisa and son Charlie, who, but for the coronavirus pandemic and all the restrictions it has led to, would have been in Tokyo. So too would her parents, having not missed a Games in which their daughter has competed before this one.

Instead, Barney – himself a three-time Paralympic champion as a sighted pilot – watched on his phone from bed, keeping his emotions in check so as to not wake a sleeping Charlie next to him.

“It was very nerve-wracking. It was the most nervous I’ve ever been watching her race,” he told BBC Breakfast.

“It’s very difficult to put into words how to describe the drive and dedication that allow her to keep competing and winning and getting better.

Storey has come a long way from the 10-year-old swimmer who was told she had “started training too late to be any good at anything”. Four years later, she was at her first Paralympics in Barcelona, where she won six medals, including two golds, in the pool.

More medals would follow in Atlanta and Sydney before a persistent ear infection saw her swap her goggles for pedals. But whether she was powering wheels or driving through water, it didn’t matter – the best was yet to come.

Since her cycling debut at the Beijing Paralympics, Storey has won 12 gold medals. She has never lost a Paralympic cycling race.

“I couldn’t have imagined being at eight Games, let alone winning medals at every Games, and 17 of those medals being gold. It’s the dream I didn’t have coming through,” she said.

“I wanted to be a British athlete and compete for my country for as long as I possibly could. To still be going strong in Games number eight is truly amazing.

“I’ve never felt a weight on my shoulders. Each race is a race, and it’s added to a tally afterwards. I’ve never felt overwhelming pressure before a race. But it is the sweetest feeling to go back to my room and know there are a couple of gold medals in the safe to put this one with. That makes the tally very real then.”

Speaking to BBC Breakfast, she added: “It still feels like an out of body experience, like you’re watching somebody else go through that.

“So now I’ve finished all three, I’m like ‘we’re finished!’. It’s very strange, so I’m hoping over the course of the next few hours and the next day it starts to sink in.

Storey will fly home to the UK on Friday, where she will be greeted at the airport by her family. Louisa, seven, told BBC Breakfast she and three-year-old brother Charlie plan to “run into her arms” when they spot her, before fighting it out to sit next to their supermum in the back of the car for the journey back to their home in the Peak District.

But will her 17th gold medal be her last? Unlikely. Her sights are already set on the Paris 2024 Games, if only to give her youngest the opportunity to attend a Paralympics.

“I said before we even came to these Games that Paris is something I would like to have the opportunity for,” she said.

“Charlie was really very keen to come and watch here and we didn’t cancel anything until the very last moment really because we just kept hoping things might improve and they might allow families in, if no-one else. It would be fantastic to take Charlie to a Games.”