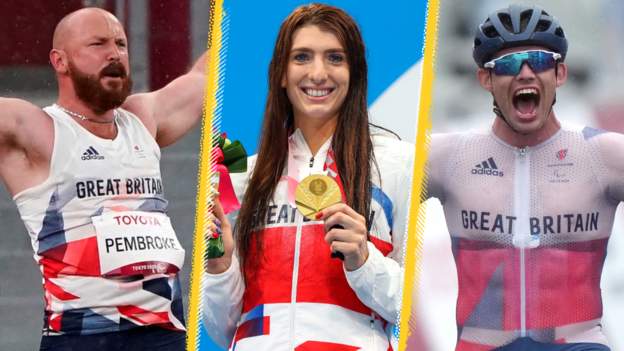 Pembroke, who has a degenerative sight condition and competed in non-disabled events before switching to Para-sport, threw 69.52m in the F13 final.

Swimmer Bethany Firth and cyclists Sarah Storey and Ben Watson also triumphed as GB stayed ahead of the Russian Paralympic Committee in second place behind China in the medal table.

The 25-year-old led from start to finish to beat Russian rival Valeriia Shabalina by 0.93 seconds for her sixth gold overall and a fourth medal of these Games.

Firth, from Northern Ireland, had won the title at London 2012 while representing Ireland but switched to represent GB in 2013 and went on to retain her crown in Rio.

Her triumph followed earlier success for Watson, who won his second gold in Tokyo with a brilliant victory over team-mate Fin Graham in the men’s C1-3 road race.

On a day when Storey won an historic 17th gold medal at the Fuji Speedway ahead of team-mate Crystal Lane-Wright, the 32-year-old debutant completed a double having won the time trial on Tuesday.

Wheelchair racer Sammi Kinghorn followed her T53 100m bronze with silver in the T53 400m while swimmer Reece Dunn claimed his fifth medal of the Games with bronze in the S14 100m backstroke.

But five-time gold medallist Ellie Simmonds could only finish fifth in the S6 400m freestyle in what is set to be her Paralympic swansong.

Elsewhere, after failing to qualify for the semi-finals of the women’s T11 200m, double Paralympic champion Libby Clegg has announced her retirement from the sport.

Whiley had earlier lost 6-4 6-2 to De Groot in the women’s singles semi-finals and will play Van Koot for bronze.

Gordon Reid failed to retain his men’s singles title as he was beaten 6-3 6-2 by top seed and home favourite Shingo Kunieda in the semi-final, while Alfie Hewett lost out to Dutchman Tom Egberink 6-4 7-6 (7-5).

It means the British pair will play off for bronze on Saturday.

A statement from the Belgian Paralympic Committee said: “First research is pointing towards a cardiac issue. Gerard will stay in hospital for further observation.”

The 32-year-old was beaten in the third round of the men’s singles and the quarter-final of the men’s doubles on Monday.

As a junior athlete, Pembroke represented Great Britain in javelin at underage level, including at the 2011 World Under-20 Championships in Canada.

However, an elbow injury ended his chances of qualifying for the Olympic Games in 2012 and a combination of that and his deteriorating eyesight saw him step away from the sport until 2019.

He has made the most of his second chance and marked himself down as a Tokyo contender with gold in June’s Para-athletics Europeans in Poland.

Despite the wet and slippery conditions in Tokyo, he beat the previous Paralympic record of 65.69m set in Rio but narrowly missed the world record of 71.01m.

“This is the best day of my life,” he told Channel 4. “I knew deep down I could win, I have wanted it for so long. I was quite anxious going into it but the third throw I gave it my all.”

Firth had a rocky build-up to Tokyo, with an ongoing shoulder injury disrupting her preparations, as well as the Covid-19 restrictions.

Shabalina took her 200m freestyle and 200m individual titles earlier in the programme while Firth was part of the victorious 4x100m freestyle relay team.

However, she was not going to give up her backstroke title without a fight and after qualifying fastest, made no mistake in the final.

“This is my favourite event, the one I’ve been waiting for all week,” she said.

“It’s been such an up and down season, I just wanted to come out here and make everyone proud.”

At the age of 14, Watson was diagnosed with Guillain Barre syndrome, which left him paralysed for five months and meant he had to learn to walk again.

It left him with impairment below his knees and although he was always keen on mountain biking, he never realised Para-sport was an option.

Five years ago, he was working as a chartered surveyor and, in his own words, “a bit fat” when he attended a British Cycling talent ID day and the journey to gold started.

Watson was in control once he went clear and Graham, who won individual pursuit silver on the track earlier in the Games, broke away from the pack to all but confirm the British one-two.

He crossed the line one minute and 20 seconds behind Watson with France’s Alexandre Leaute taking bronze, almost seven minutes after Watson had won, with the third Briton Jaco van Gass missing out in fifth.

Happy ever after at the athletics track

Cape Verde sprinter Keula Pereira Semedo and her guide Manuel Vaz da Veiga might have finished last in their heat of the women’s T11 200m but there was a silver lining.

Vaz da Veiga proposed to his girlfriend and racing partner on the track after the race with the rest of the field around them – a moment he had been planning since Pereira Semedo was selected for the Games in July.

“I thought this was the best occasion and the best place to do it,” he said. “An athletics track is her second home. She has been competing since 2005.

“We have been together in a relationship for 11 years, so I thought it was about time to come up with a proposal. So why not do it?”

“With the proposal there’s just too many emotions going on right now,” she said. “I don’t have words to explain how I feel. I am sure our parents will go crazy. They will like it.

“These were my first Paralympic Games and with my age and speed I was actually thinking about stopping afterwards but now I have an additional motivation to carry on after the Games, always with him by my side.”

On another busy day in Tokyo, Swiss wheelchair racer Marcel Hug won his third race out of three with victory in the T54 800m to follow up his success over 1500 and 5,000m.

And swimmer Jessica Long won her 28th career Paralympic medal when she helped the US to gold in the 4x100m medley relay.