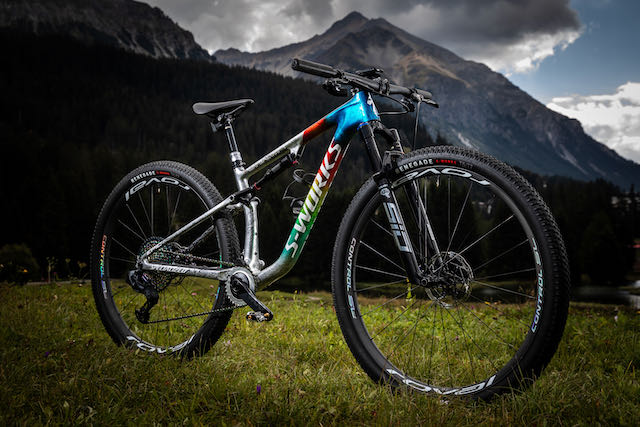 Sina Frei (Switzerland), fresh off a silver medal at the Olympic games, showed up ready to ride in Val di Sole. The racecourse for the XXC was technical and required patience among the riders, go out too soon, and boom – explosion. Frie played it correctly, down to the wire, following crucial riders’ attacks and leading out the sprint from the final corner.

The race came down to a perfect play of effort conservation, guts, and one heck of a photo finish with now XCO World Champion Evie Richards.

Chris Blevins (United States) came into the XXC race final with confidence from a silver medal in the team relay and a front-row start along with the world’s best. He battled for every corner with Henrique Avancini (Brazil) and took the win in a glorious sprint that no one in the pack could match.

Blevins would receive three medals in the MTB World Championships; a Gold medal in the XCC, a silver medal in the team relay, and a bronze medal in the E-Bike race. This medal achievement is the first time for any athlete at a world championship MTB event and the first American man to win in a cross country event since John Tomac in 1991.

To recognize the outstanding performance of these incredible athletes, Specialized has created custom-painted S-Works Epic framesets, which they’ll pilot during their year in the World Champs jerseys.

If you want to share in the celebration but haven’t won a World Championship, you’re lucky — Specialized will be offering 50 limited edition framesets for riders to purchase in early October.

A portion of the World Champion Epic framesets proceeds will go to the OUTRIDE Foundation, an organization founded by Specialized Mike Sinyard and dedicated to proving that cycling benefits your brain. The program provides research, cycling programs, and grant-giving activities. “OUTRIDE provides evidence-based cycling interventions to improve social, emotional, and cognitive health.”

The next stop on the UCI MTB World Cup calendar is the historic track at Lenzerheide. This will be the first time we see the newly crowned World Champions in their respective trade team kits with all the cool bits.