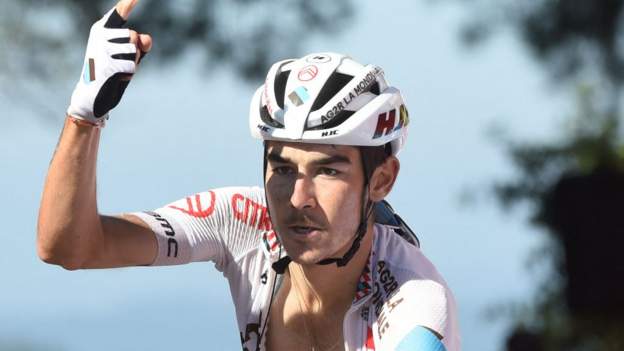 France’s Clement Champoussin claimed a stunning win in a dramatic penultimate stage at the Vuelta a Espana.

Jumbo Visma’s Primoz Roglic all but confirmed a third straight Vuelta victory, finishing the stage in second and extending his lead over Enric Mas in the general classification.

Mas’ Movistar teammate Miguel Angel Lopez began the day in third, but abandoned the race with 20km to go.

Britain’s Adam Yates is up to fourth overall following a third-place finish.

UAE Team Emirates rider Ryan Gibbons hit the final climb of Saturday’s 202km stage from Sanxenxo to Mos in the lead, but was clawed back with less than 5km remaining by a group including Roglic, Mas, Ineos’ Yates and Jack Haig of Bahrain Victorious.

Champoussin, 23, who only turned professional last year, then stole in with a late attack of his own to take victory as the general classification riders tried to finesse the closing stages.

“I’m super happy with the place I finished in today and with the way it went,” said Roglic. “I was mainly looking at Yates and Mas.

“I’m looking forward to tomorrow. We’ve been waiting for this and finally here we are.”