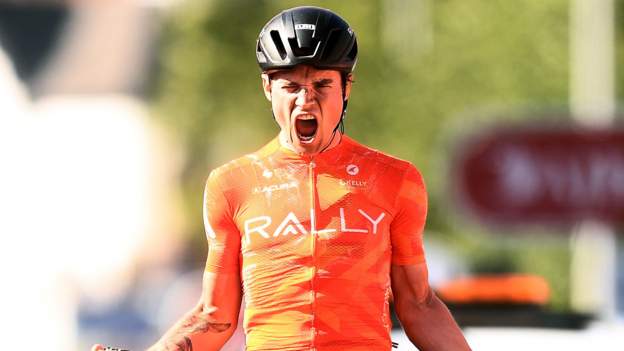 American Robin Carpenter held off a late surge from the peloton to win stage two of the Tour of Britain with Ethan Hayter home in second.

Rally Cycling rider Carpenter crossed the line in four hours 45 minutes and 56 seconds as he became the first American to win a stage of the race.

The 29-year-old’s margin of victory was enough to see him claim the leader’s blue jersey from Wout van Aert.

Having been part of the five-rider breakaway, Carpenter managed to distance Britain’s Jacob Scott on a climb coming out of Moretonhampstead with 25km remaining of the gruelling 184km route from Sherford to Exeter.

While the American enjoyed a four-minute advantage over the peloton at that point, he eventually finished 33 seconds ahead of the pack and now holds a 22-second lead over Van Aert, with Hayter – who finished fourth in Sunday’s opener – a further four seconds behind in third.

“I’ve been wanting a win in Europe for a number of years now, and I’ve come really close, so it feels amazing,” said Carpenter.

“We still had five minutes [over the peloton] with 40km to go, so I knew I just needed to get rid of everybody else and not have to worry about babying anyone else to the line or worrying about anyone else sprinting me.”

Stage three on Tuesday sees the riders tackling an 18km team trial from Llandeilo to the National Botanic Garden of Wales.