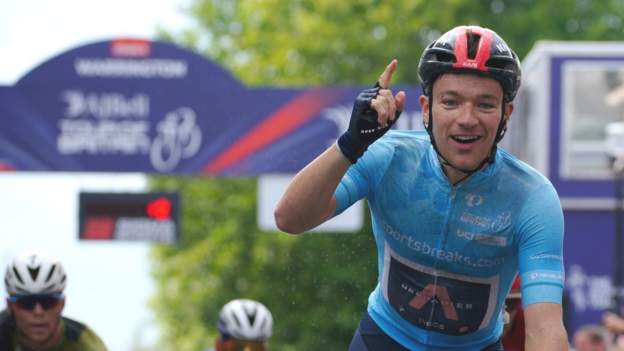 Britain’s Ethan Hayter sprinted to victory on stage five of the Tour of Britain to reclaim the leaders’ blue jersey just 24 hours after he lost it.

Hayter beat Giacomo Nizzolo and Dan McLay to the line in Warrington after his Ineos Grenadiers team-mate Owain Doull crashed and split the peloton.

Overnight leader Wout van Aert was caught behind the crash and trails by eight seconds in the overall standings.

“I saw Doull drifting and I thought, ‘this isn’t good’,” Hayter said.

The Londoner added he “couldn’t quite believe the situation” after avoiding the crash on the final bend.

“I managed to squeeze through between his bike and the barrier and then you get a rush of adrenalin, so I was screaming at [team-mate Michal Kwiatkowski] to go,” the 22-year-old continued.

“There’s a lot of hard racing to come and it might not come down to time bonuses – there might be gaps tomorrow [Friday] and a couple of days after, so it’s going to be interesting, we’ll see what we can do.”

The race continues with a 198km stage from Carlisle to Gateshead on Friday.