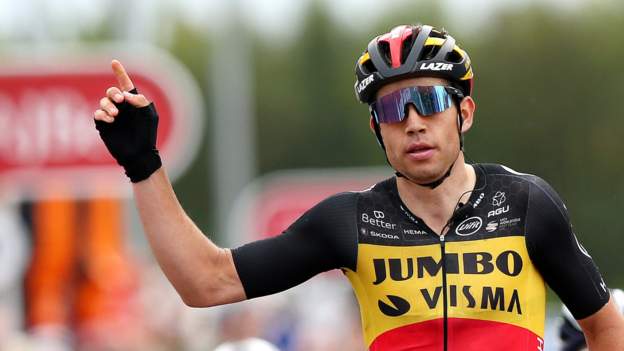 Belgium’s Wout van Aert moved to within four seconds of Tour of Britain leader Ethan Hayter after pipping the Briton in a sprint finish to win stage six.

The 198km stage from Carlisle to Gateshead culminated in a three-way sprint between the overall favourites – Van Aert edging Hayter with world champion Julian Alaphilippe in third.

It was Jumbo-Visma rider Van Aert’s third stage win of this year’s Tour.

Ineos Grenadiers rider Hayter said he “was quite happy with second”.

“I was on the limit and to be in a three-up sprint with Van Aert, second is not too bad,” the 22-year-old added.

British sprinter Mark Cavendish was part of a nine-strong breakaway which at one stage had built a four minute advantage, but was chased down before the finish.

The race continues with a 195km stage from Hawick to Edinburgh on Saturday before Sunday’s finale into Aberdeen.