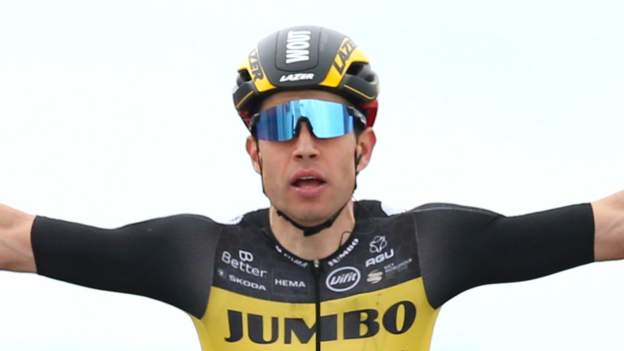 Belgium’s Wout van Aert won the final stage of the Tour of Britain to pip Great Britain’s Ethan Hayter to overall victory in the race.

Van Aert produced a late surge in a bunched sprint to narrowly and dramatically win stage eight, which was 173km from Stonehaven to Aberdeen.

“A bit disappointed to lose on the last day,” Hayter told ITV4. “But I can be very happy with this week with winning the team time trial, the stage in Manchester and second overall is pretty good.

“He (Van Aert) has won four stages so, fair enough, he wins the general classification to be honest.”

The peloton reeled in a six-man breakaway on the final stage with four kilometres left before the sprint finish, when Hayter found himself out of position to challenge Van Aert.

The Belgian’s four stage wins was the joint-highest in the modern incarnation of the race and he also became the sixth rider to have won stages in England, Scotland and Wales.

“I needed all of my guys to close the gap with the breakaway,” said Van Aert. “After their impressive work, it was a pleasure to finish it off.

“Taking all these wins is beyond expectations. We had a really nice week.”