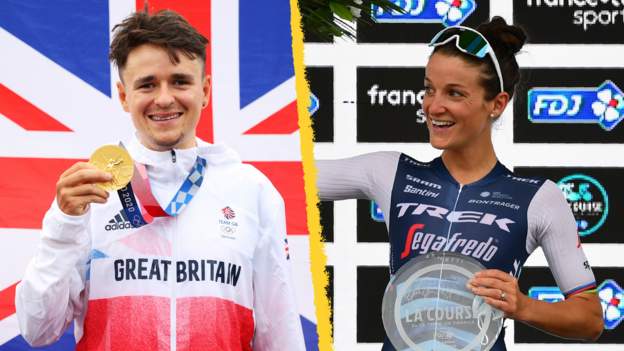 The 2021 UCI Road World Championships begin on Sunday in the Flanders region of Belgium.

After Covid-19 restricted last year’s edition to the elite men’s and women’s road races and time trials, the championships features 11 events this year as the time trial mixed relay, under-23 and junior categories return.

All the elite action from the week-long event will be shown live on the BBC.

Here is who and what to look out for at international road cycling’s showpiece.

The elite road races start in Antwerp and end in Leuven, with the men covering 268.3km and the women 157.7km.

While different from the ‘monument’ classic the Tour of Flanders, the routes do feature cobblestone sections, sharp rises and testing turns that will reward riders with all-round skills.

The time trials take place in the north of the region, starting in Knokke-Heist and ending in Bruges, with the elite men riding 43.3km and 30.3km for the women.

The courses are largely flat and fast, favouring those who can produce the highest power over long distances.

Britain failed to win a medal for the first time since 2009 at last year’s championships, but a strong 2021 squad have plenty of medal chances.

The eight-man elite men’s road team have not named a specific leader but the route is most likely to favour Olympic mountain bike champion Tom Pidcock.

Gold in Tokyo demonstrated Pidcock’s versatility, which will be key on the varied course, and he beat race favourite Wout van Aert in a sprint to win this year’s Brabantse Pijl on similar terrain.

Ethan Hayter is another strong option following his second place at the Tour of Britain and, should it come down to a sprint, a resurgent Mark Cavendish, who won the green jersey and equalled the record for most stage wins at this year’s Tour de France, could win a second road world title.

But having often been isolated toward the end of previous championships, Deignan will need a strong showing from her team, including 20-year-old Pfeiffer Georgi, who took her first professional win this year and is also riding the time trial.

Britain will also hope to win a second consecutive medal in the returning mixed time trial relay, having taken bronze in Yorkshire two years ago.

After three very different stage wins at this year’s Tour, silver in the Olympics road race and a dominant Tour of Britain win, Belgian champion Van Aert is the clear favourite for the road race.

The remarkable all-rounder is backed by a very strong team and also has a good chance of victory in the time trial – no elite men’s rider has ever won both road and time trial titles in the same year.

Dutchman Mathieu van der Poel would be considered alongside Van Aert as favourite given the terrain, but his participation remains a doubt because of the back injury he sustained in a crash during the Olympics mountain bike race.

The terrain should suit Vos best out of those three, though Van Vleuten could well attempt another long-distance solo breakaway as she did to win gold in Yorkshire in 2019.

The Dutch will challenge for all three medals in the elite women’s time trial too, through Van der Breggen, Van Vleuten and Ellen van Dijk.

Olympic champion Primoz Roglic has opted to sit out the elite men’s time trial in favour of the road race, but Slovenia still have a strong medal hope in two-time reigning Tour champion Tadej Pogacar.