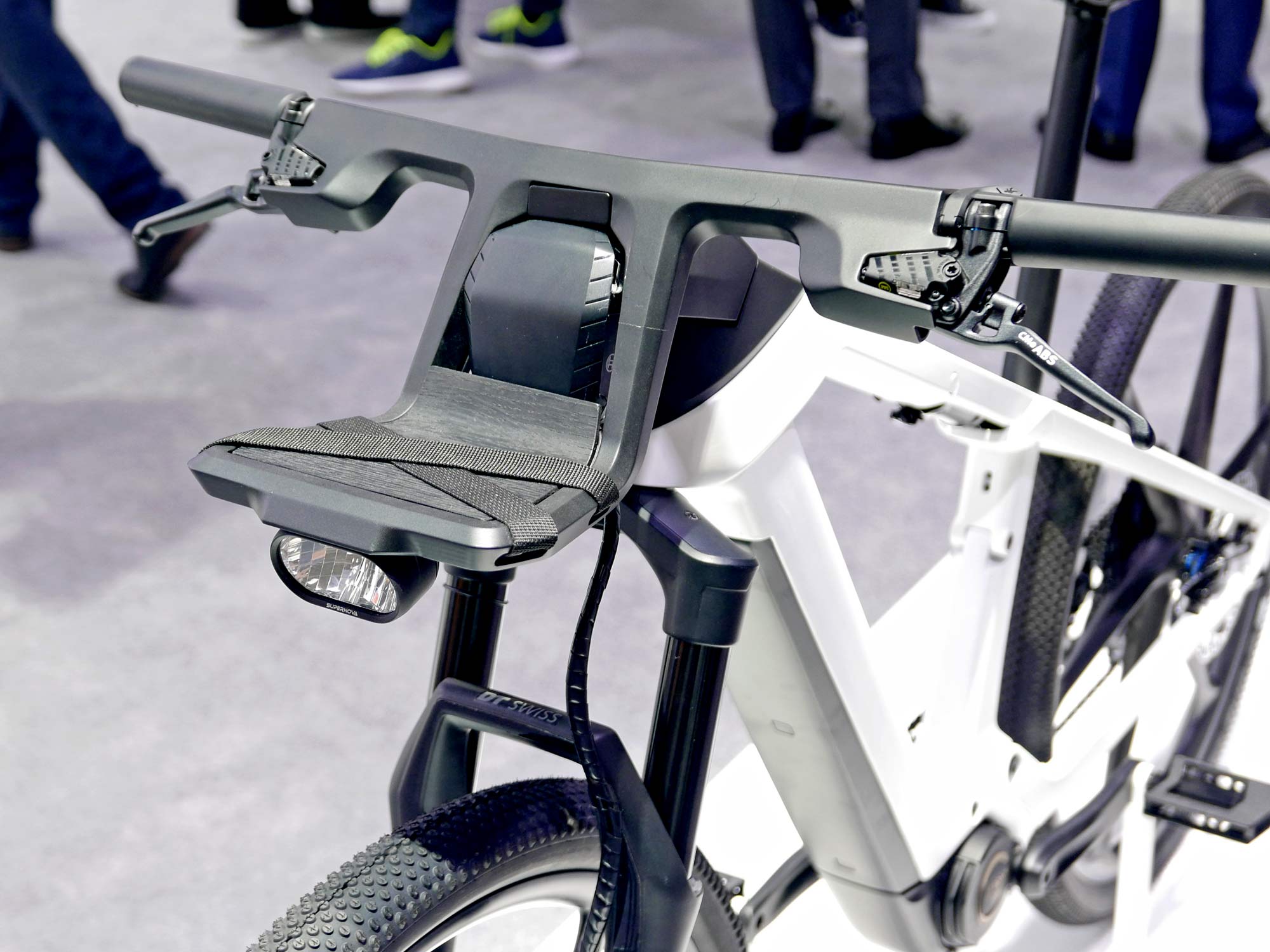 Bosch eBike ABS has offered functional anti-lock braking solutions for a couple of years to OEM e-bike producers. And occasionally we’ve spotted a model or two with ABS. But whether due to extra cost, complexity, lack of consumer, or just relatively clunky installations, ABS certainly hasn’t seemed to catch on. But now, Bosch has been using this prototype e-bike to hype their idea of advanced urban mobility. And its eBike ABS setup is as well integrated as we’ve seen. The question remains, do the safety & performance benefits of anti-lock brakes outweigh the downsides for e-bikes or even conventional bikes? 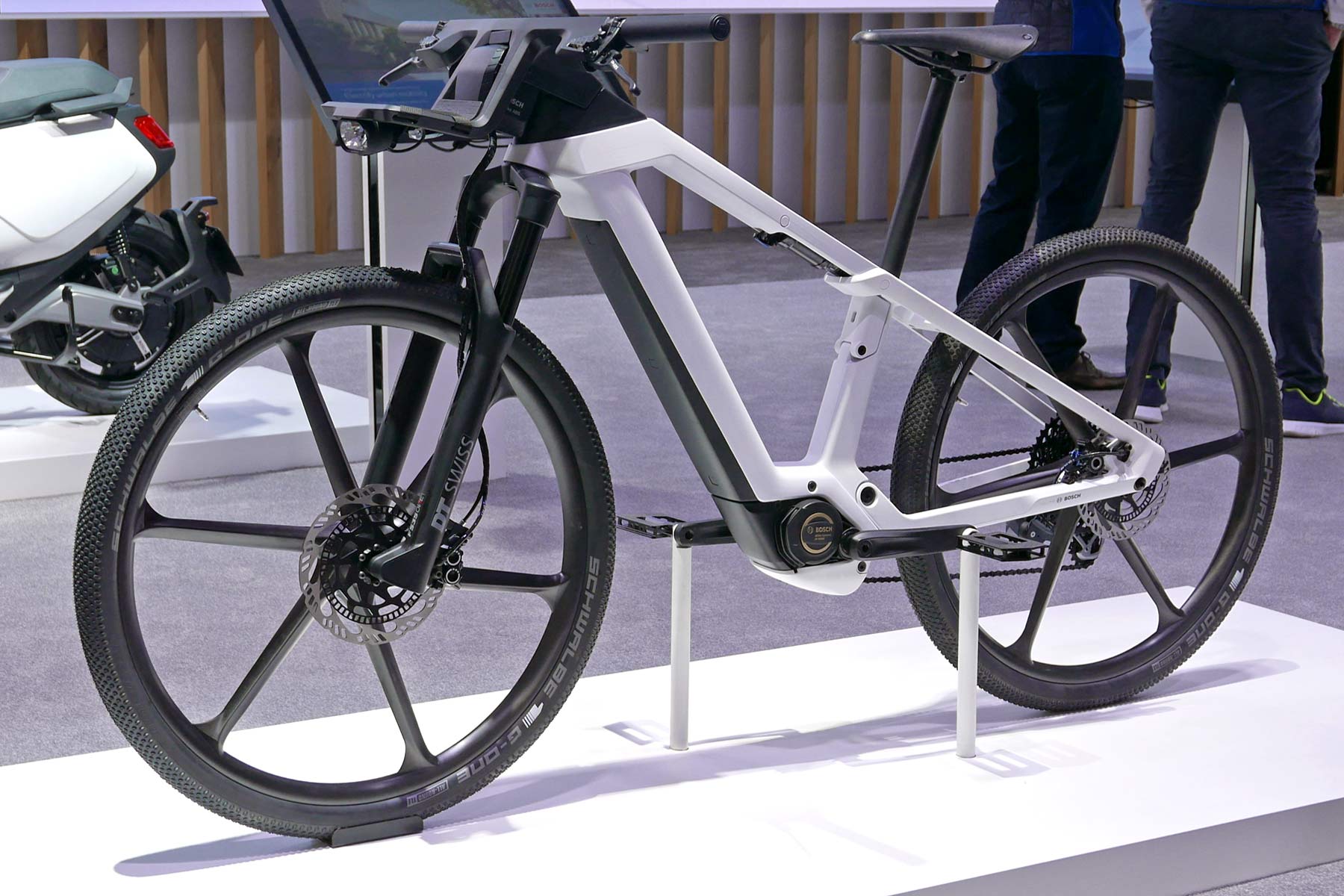 Application of Bosch’s eBike ABS anti-lock braking system has so far been mostly been limited to heavier commuter e-bikes and e-cargo bikes where moderately high speeds and heavier weights lend greater ABS benefits in improved safety & control. But Bosch seems to think that ABS could find broader reach in the general e-bike market, as has become the norm in Europe with even lightweight mopeds. And once ABS takes hold on performance e-bikes, maybe regular bikes aren’t far behind. 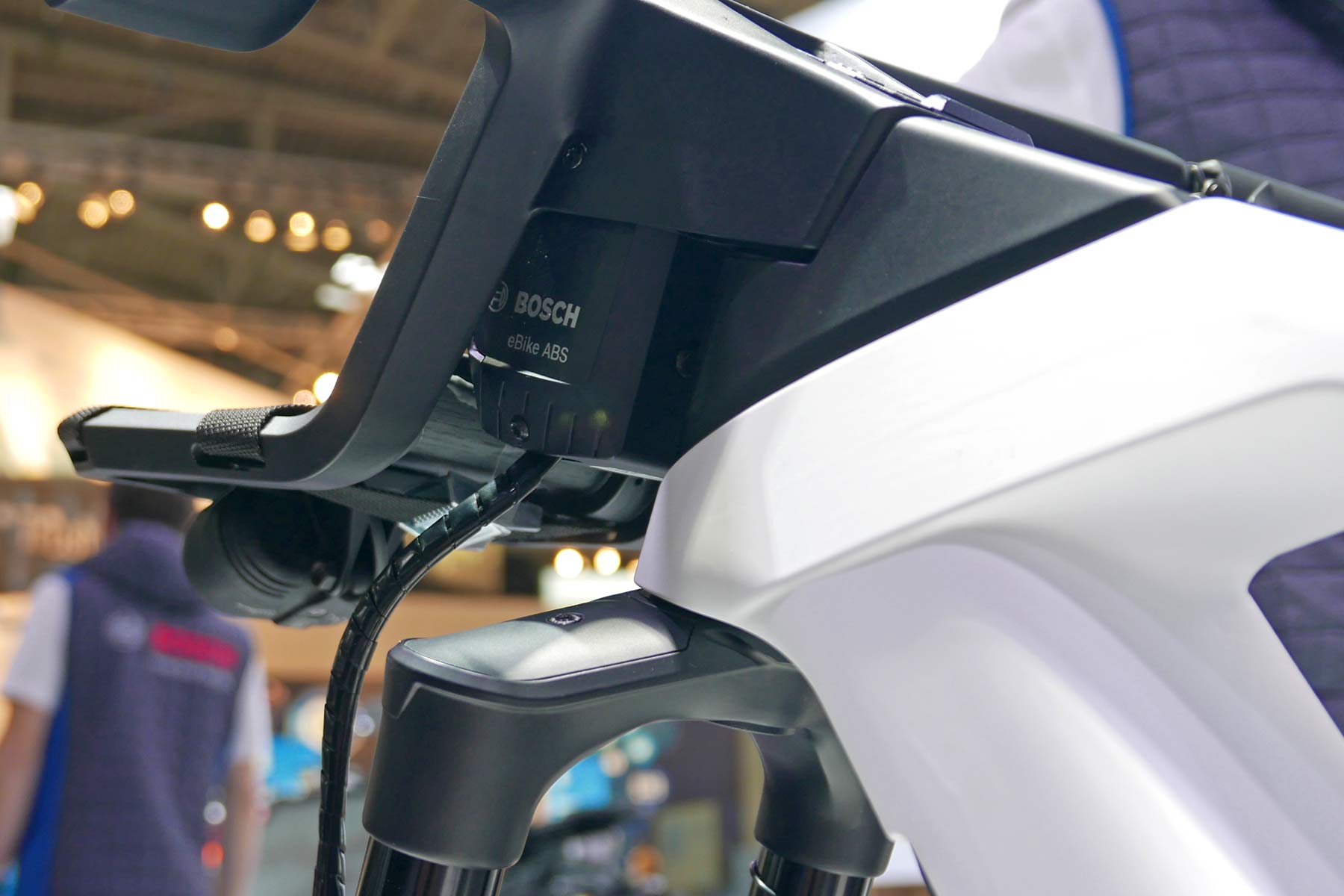 The benefits Bosch touts of their eBike ABS setup are clearly focused on rider safety – preventing front wheel slip while braking and preventing rear wheel lift under hard front braking. Bosch says they developed their eBike ABS for city, touring, and trekking eBikes where the market is growing rapidly and many new riders are getting on two wheels without a ton of experience. And with the increased power of modern hydraulic disc brakes, ABS can in theory give a less-experienced rider the maximum braking possible, without risk of losing control.

As a longtime cyclist, before I tried ABS on an e-bike the first time, I was sure that I wouldn’t want to sacrifice complete control over braking. But grabbing a fist full of front brake on a heavier bike while cruising down a loose-surface road at higher speed, the safety benefits are quite clear. 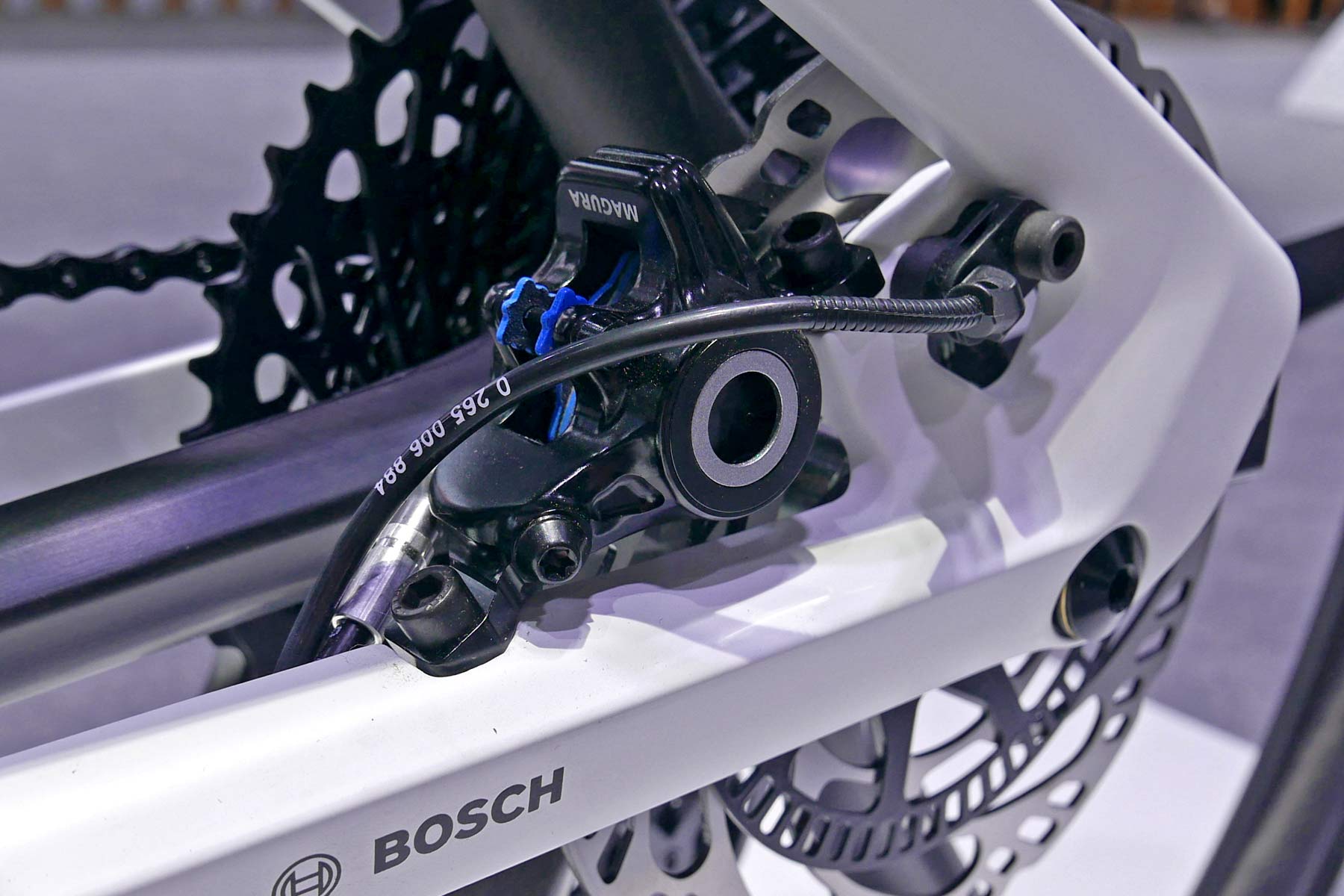 The brains of the Bosch eBike ABS setup is an Anti-lock Braking System controller, the rather bulky device hanging off the bar to react to sensor input and modulate the force in the hydraulic brake lines (integrated with the rack two images above). An ABS system light which often is integrated into the e-bike’s system display lets riders know when the system is activated (much like in a car.) 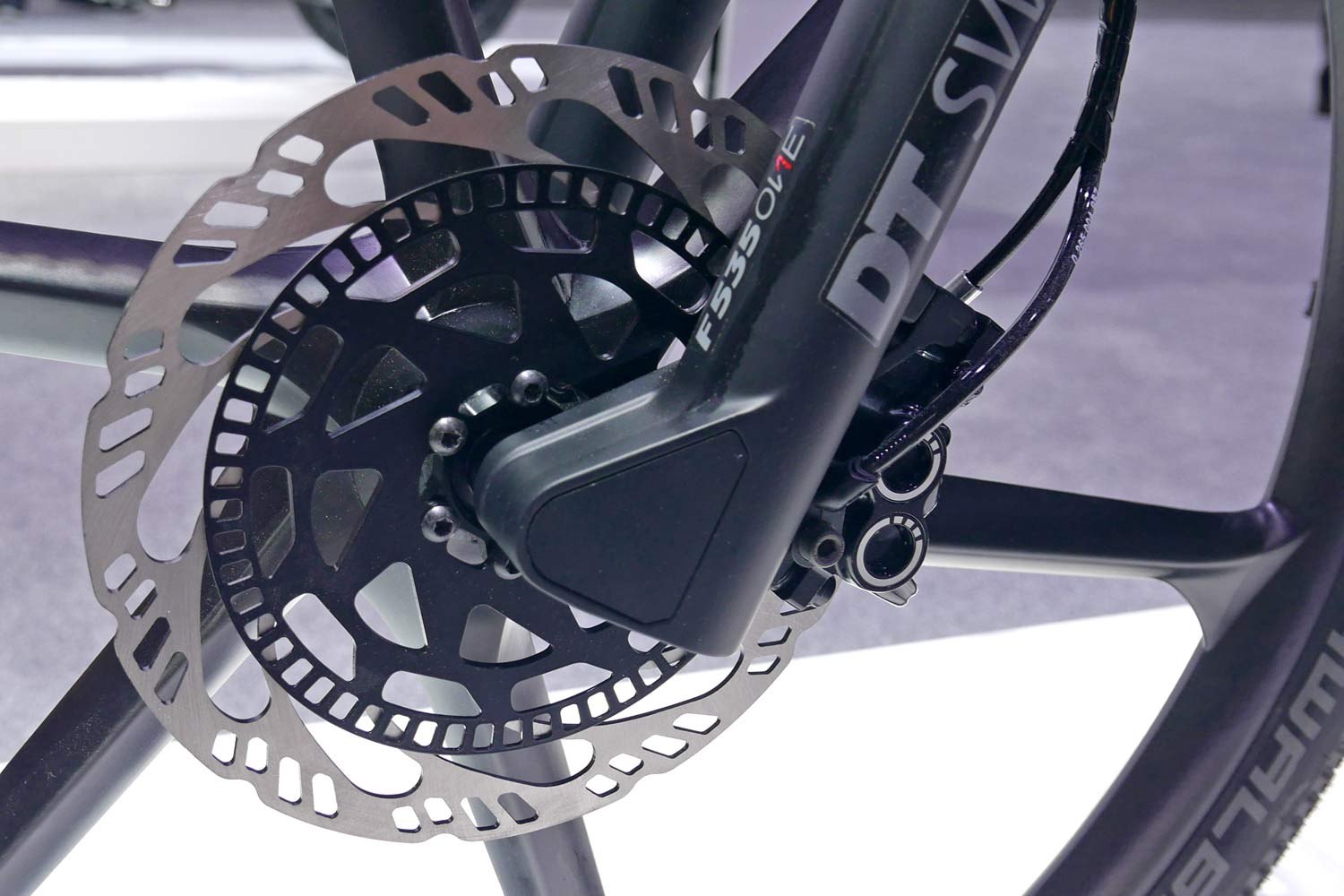 That system receives & processes speed data from wheel speed sensors front & rear that are integrated into the brake calipers and rotors. 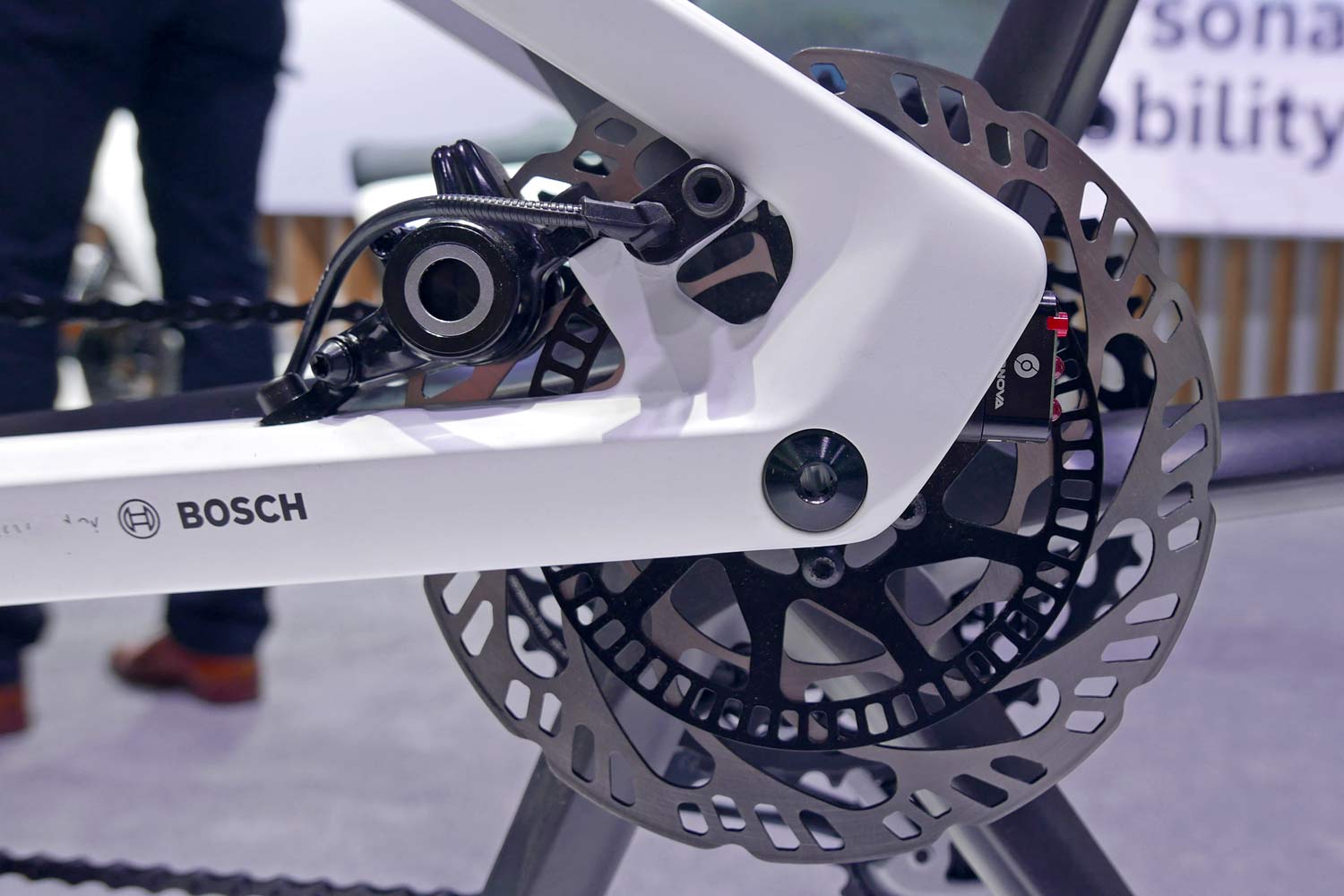 They measure wheel speed and deceleration through special ABS sensor discs that bolt up directly to otherwise conventional 6-bolt disc brake rotors. The anti-lock braking system is then automatically activated once the bike/e-bike gets up to any speed above 6km/hr.

The Bosch system was developed to work with Magura e-bike system brakes, that offer caliper versatility. The Magura CMe ABS brake lever & master cylinder setup (below) builds in actuation sensors that communicate with the ABS controller, but also can be paired with lighting for functional brake lights out back. 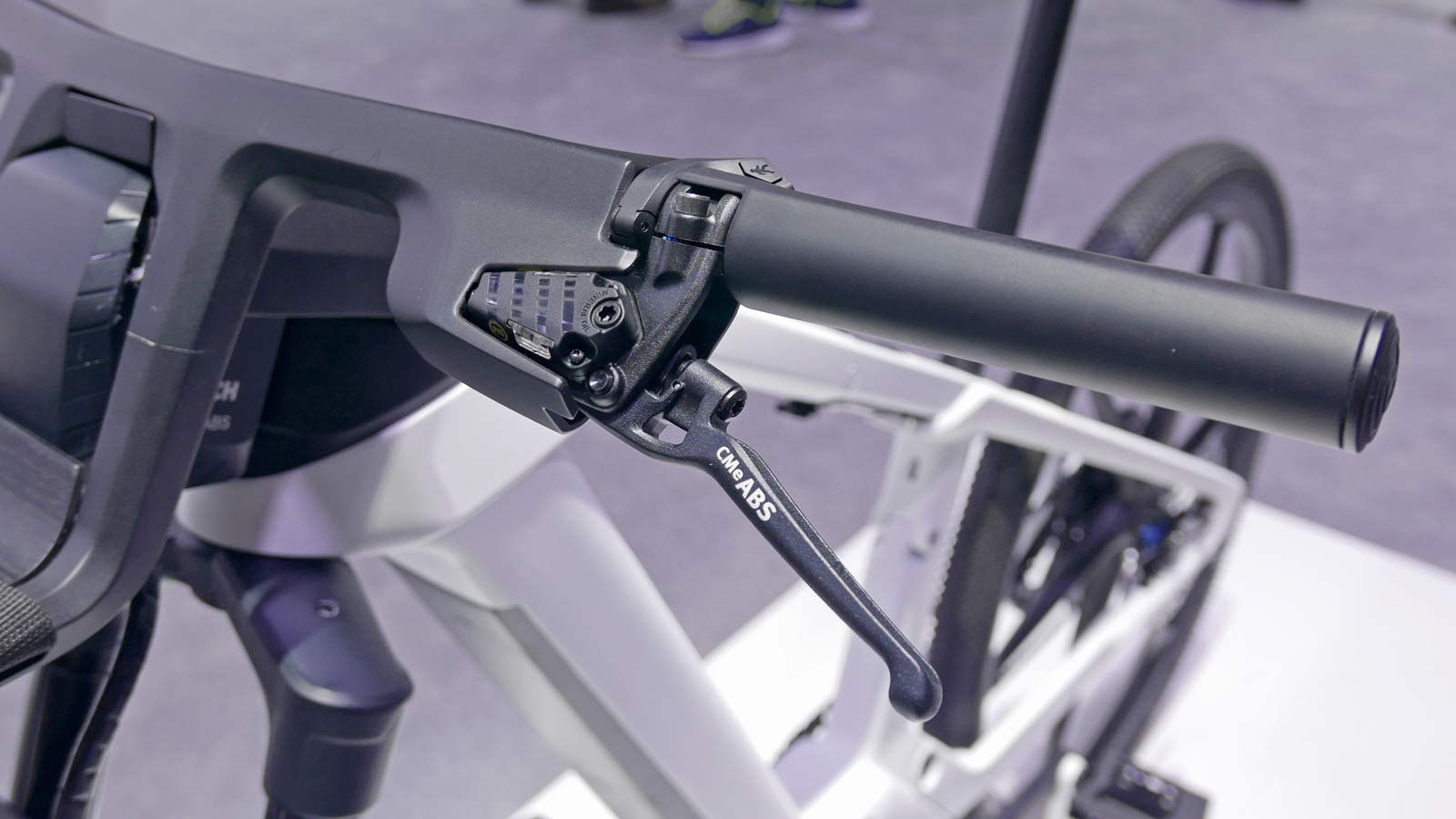 Bosch says the complete ABS setup weighs just 800g (about the same as adding another large water bottle and cage to your bike), so probably not such a big deal in the long run. The trick is maybe that the majority of that is still in the controller hanging off the bar. And it’s not exactly the nicest-looking setup on current e-bikes.

So, that’s where Bosch is looking to better integrate their eBike ABS with bikes & e-bikes. This prototype eMTB neatly tucks the big controller into a one-piece composite cockpit that combines a carbon stem, low-rise mountain bike handlebar, and lightweight front rack. It even shrouds the brake line routing while maintaining some adjustability, and integrates front lighting, as well. 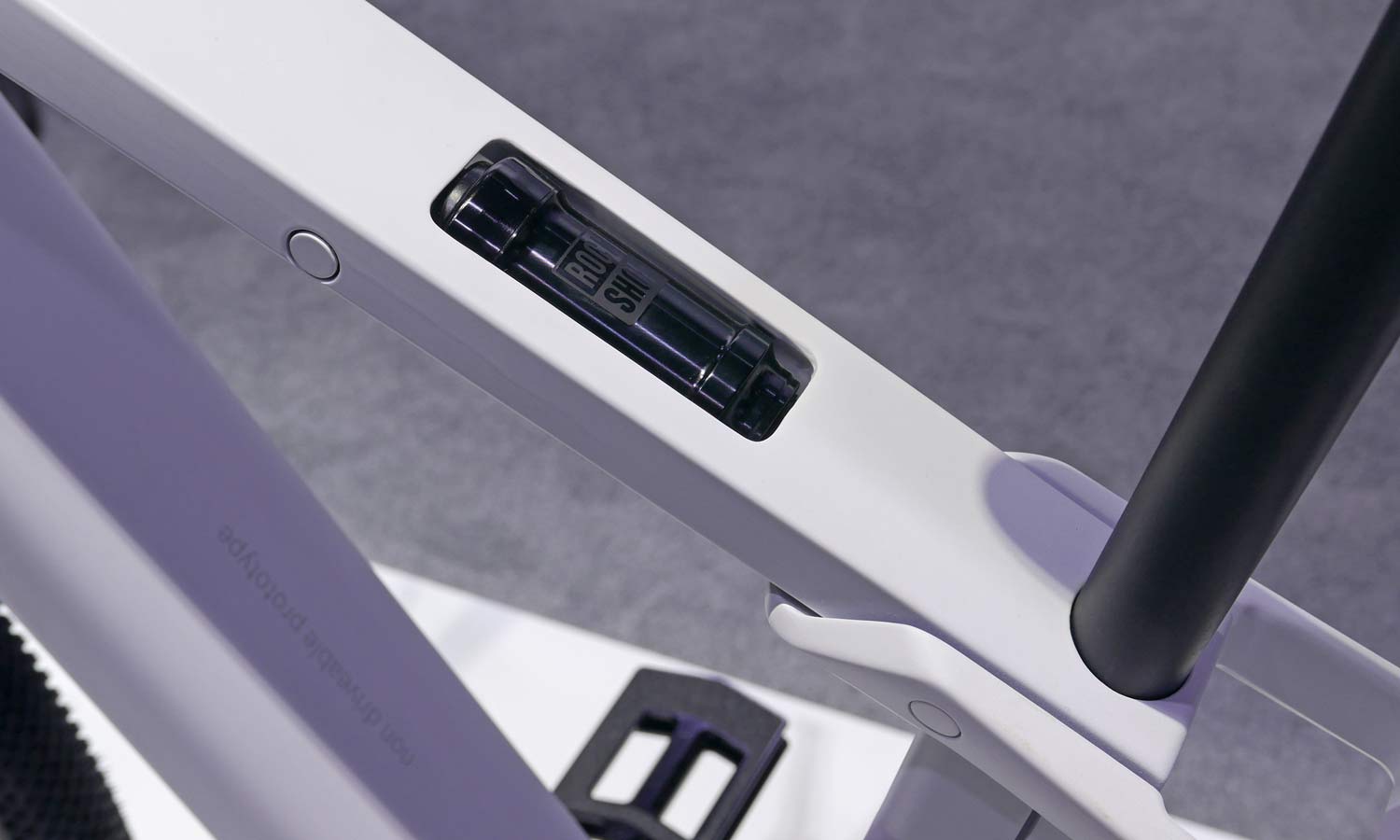 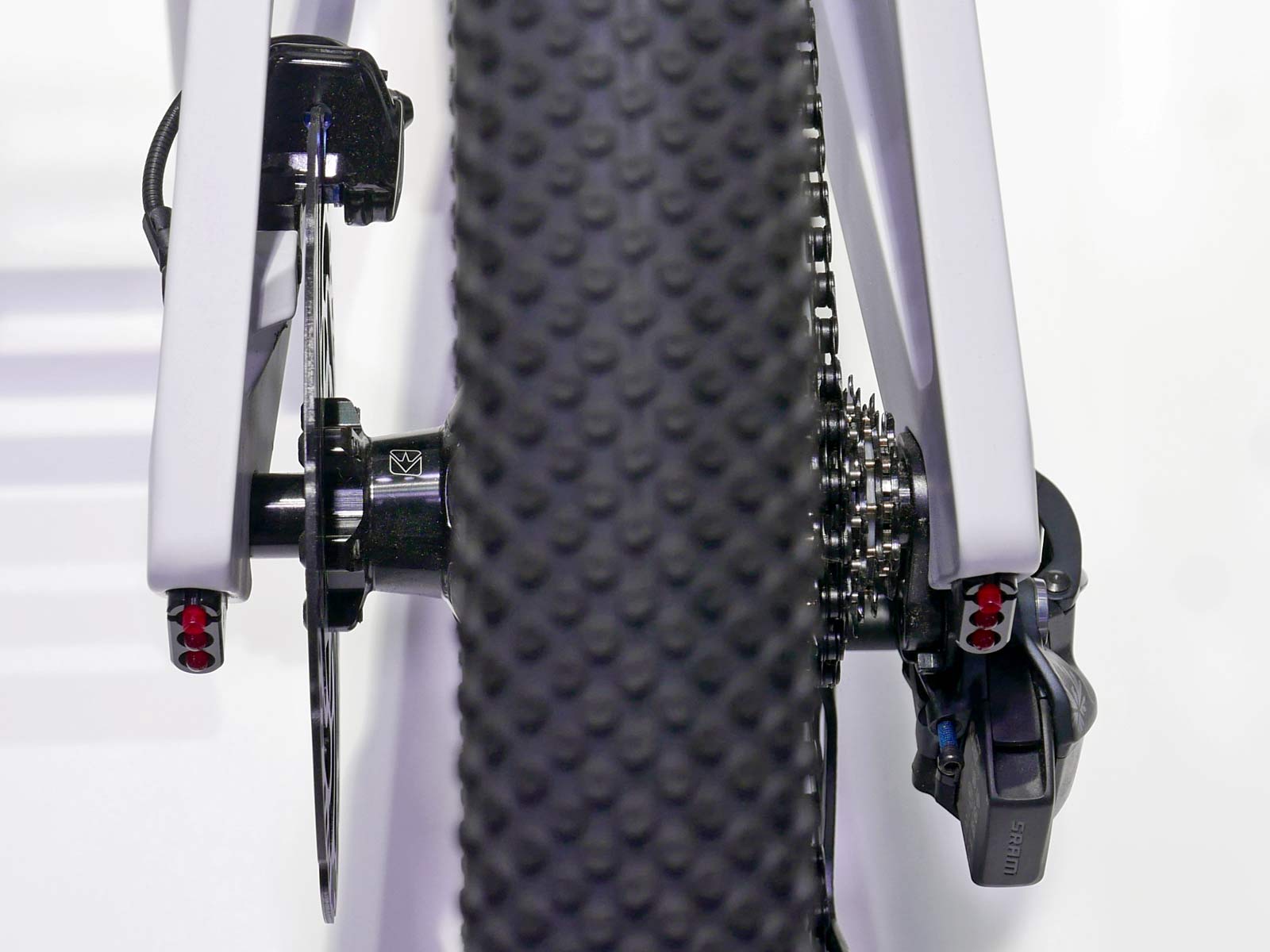 Out back, the electronics integration is equally clean, with just the brake & ABS control wiring visible at the rotor, and tiny LED Supernova lighting tucked in next to a wireless SRAM AXS Eagle drivetrain.

How much does it cost? And should we expect to see more ABS-equipped bikes? 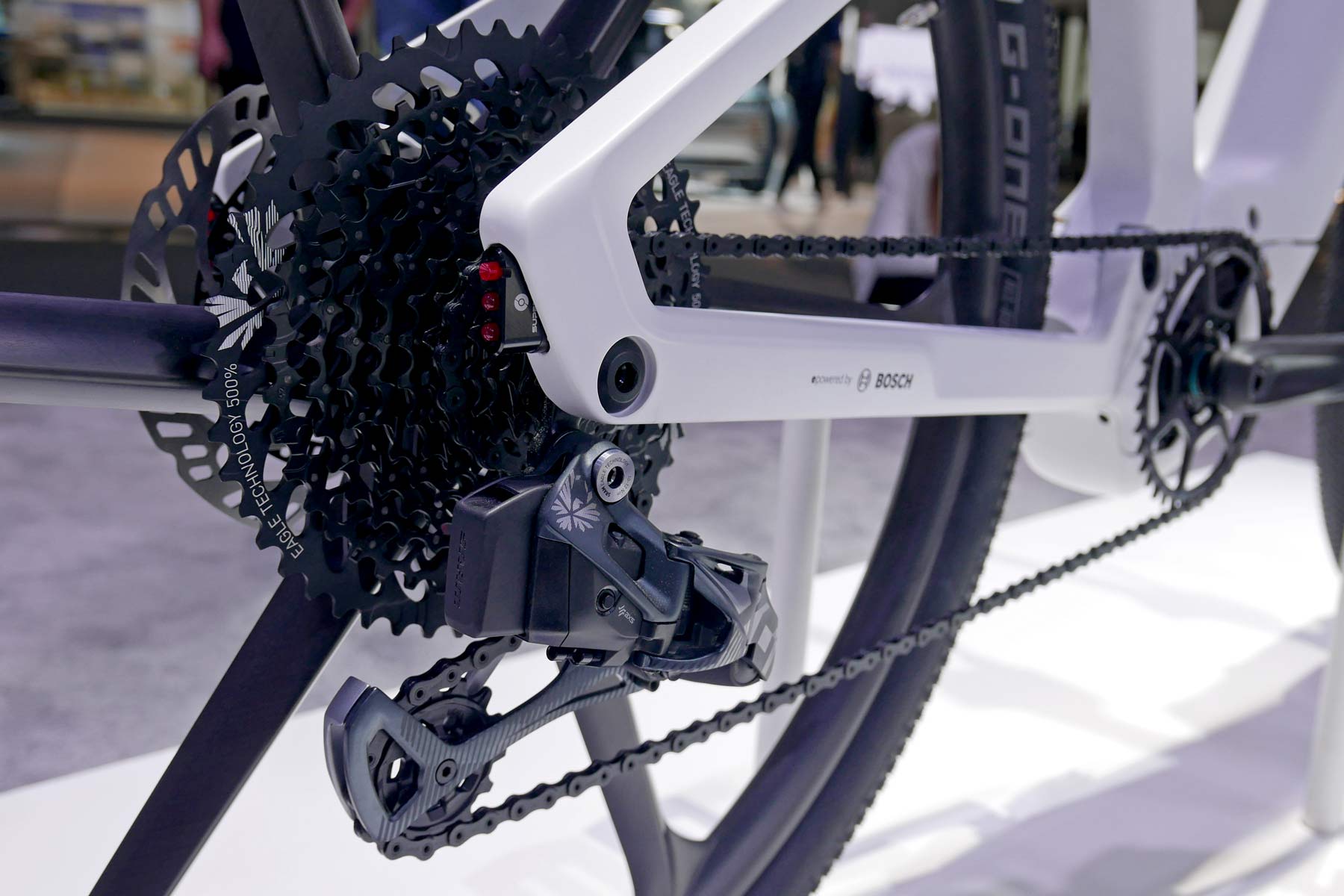 For now, a few bike OEMs do offer Bosch eBike ABS – some for a roughly 500€ upcharge in limited builds like Riese & Müller, or others like Centurion & KTM where subtle spec changes make it effectively no additional cost. But, the application of ABS remains quite limited to heavier city & cargo e-bikes. With that said, Bosch says they studied e-bike accident data and determined that, “if ALL pedelecs were equipped with ABS, up to 29% of pedelec accidents could be avoided each year.”

We’re seeing more viable ABS solutions on e-bikes (see Blubrake,  for another available system) with better integration all the time. Adoption of ABS for e-bikes will definitely grow as more people take up two wheels for transport. But, I also wouldn’t be surprised to see ABS on pedal-powered bikes in the near future as well, as systems become smaller, lighter & more integrated.