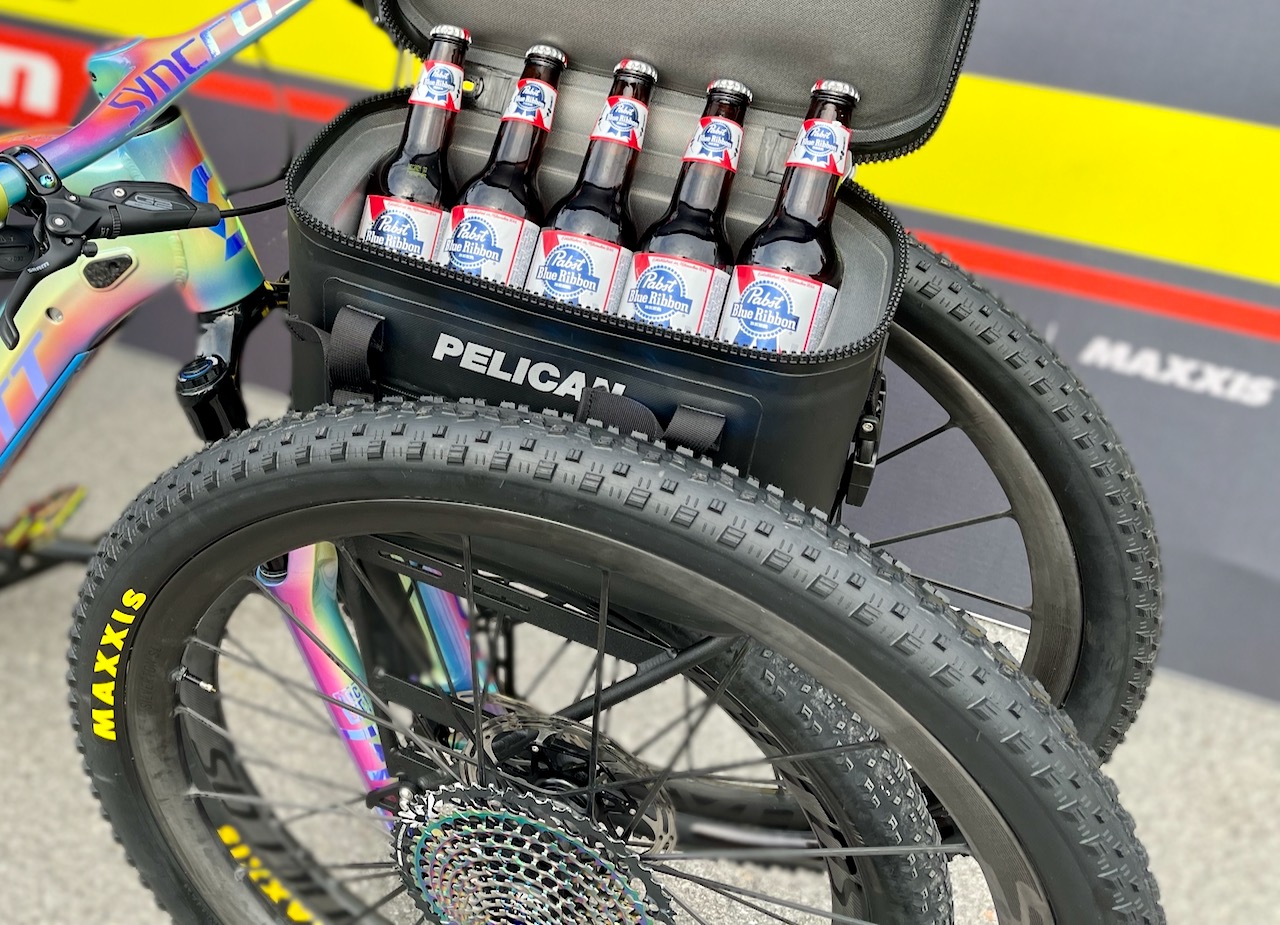 World Cup races and end-of-season events are perfect for data collection on prototype products. Manufacturers get the full expression of the athlete’s performance, plus piles of post-race data. It’s also an excellent time to sneak a peek at designs nearing the final stages before full production. Many teams and athletes were running preproduction gear at the Snowshoe World Cup, some disguised — badged as older products, some like Schwalbe took more of a tongue-in-cheek approach. We spotted cool, fast-looking tires around the pits and were lucky enough to get some insider info to share — enjoy… 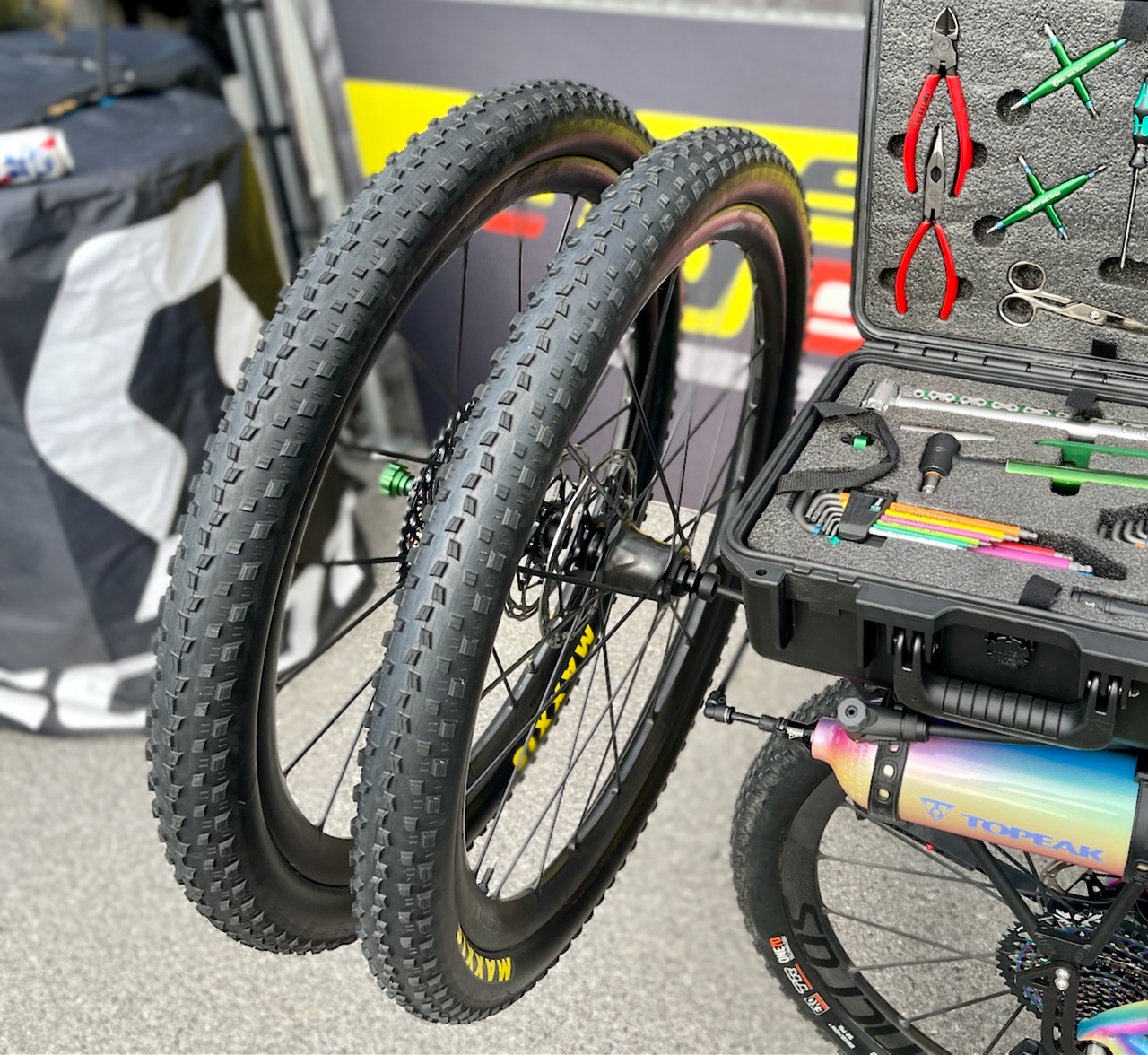 First up is what appears to be a full-on XC mud race tire from Maxxis. From what we gather, this is a unique design that the team will use on tracks that are nowhere near drying out, something like the mud-fest at the Les Gets World Cup. 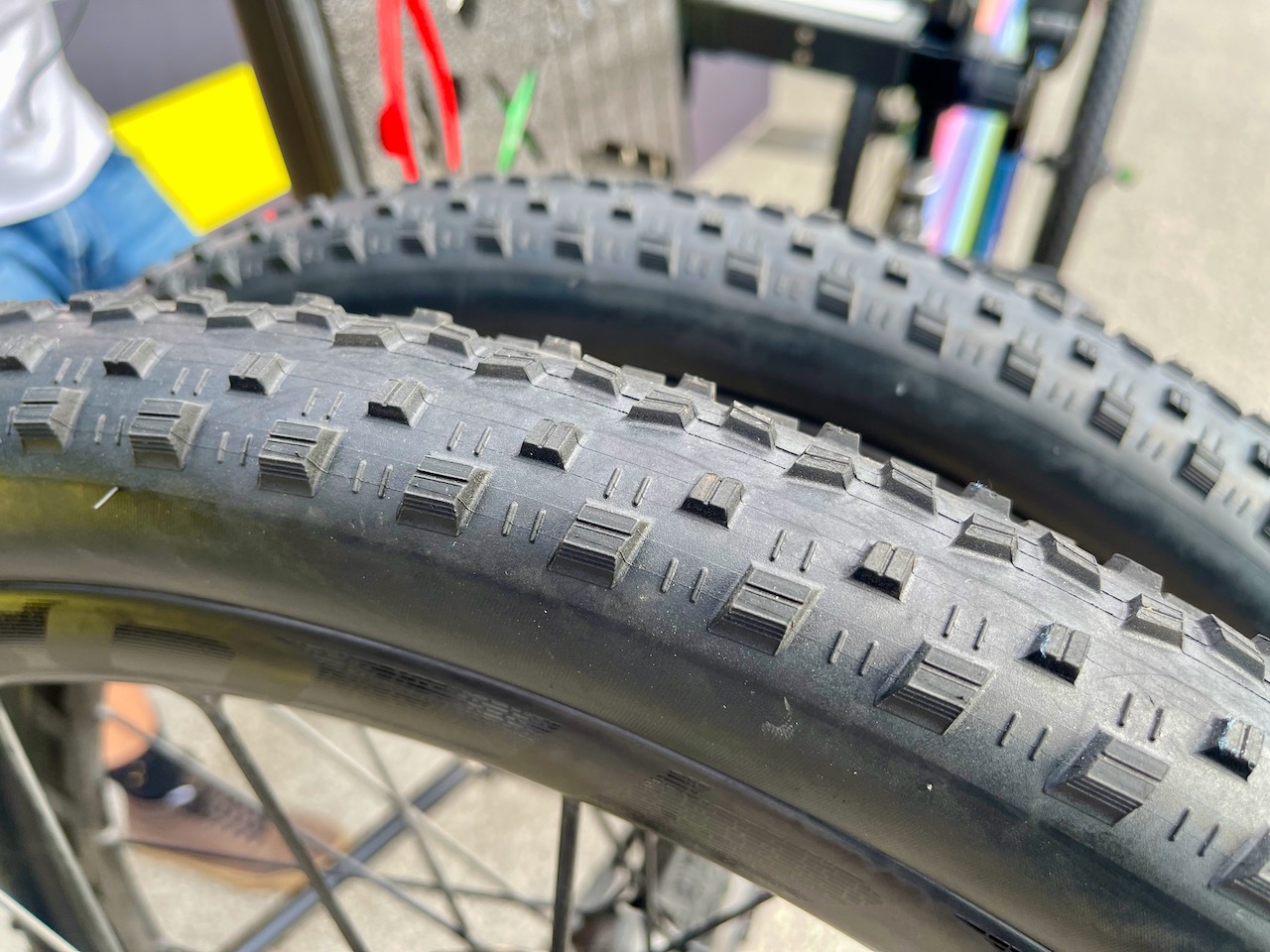 The tire is a relatively narrow 2.20″, (the team usually runs 2.40 Maxxis Aspens), and the Scott team runs them on a slightly narrower rim on the Syncros Silverton wheels (26mm instead of the 30mm they usually run). This narrow profile will allow the tire to sink through the mud and find grip faster. 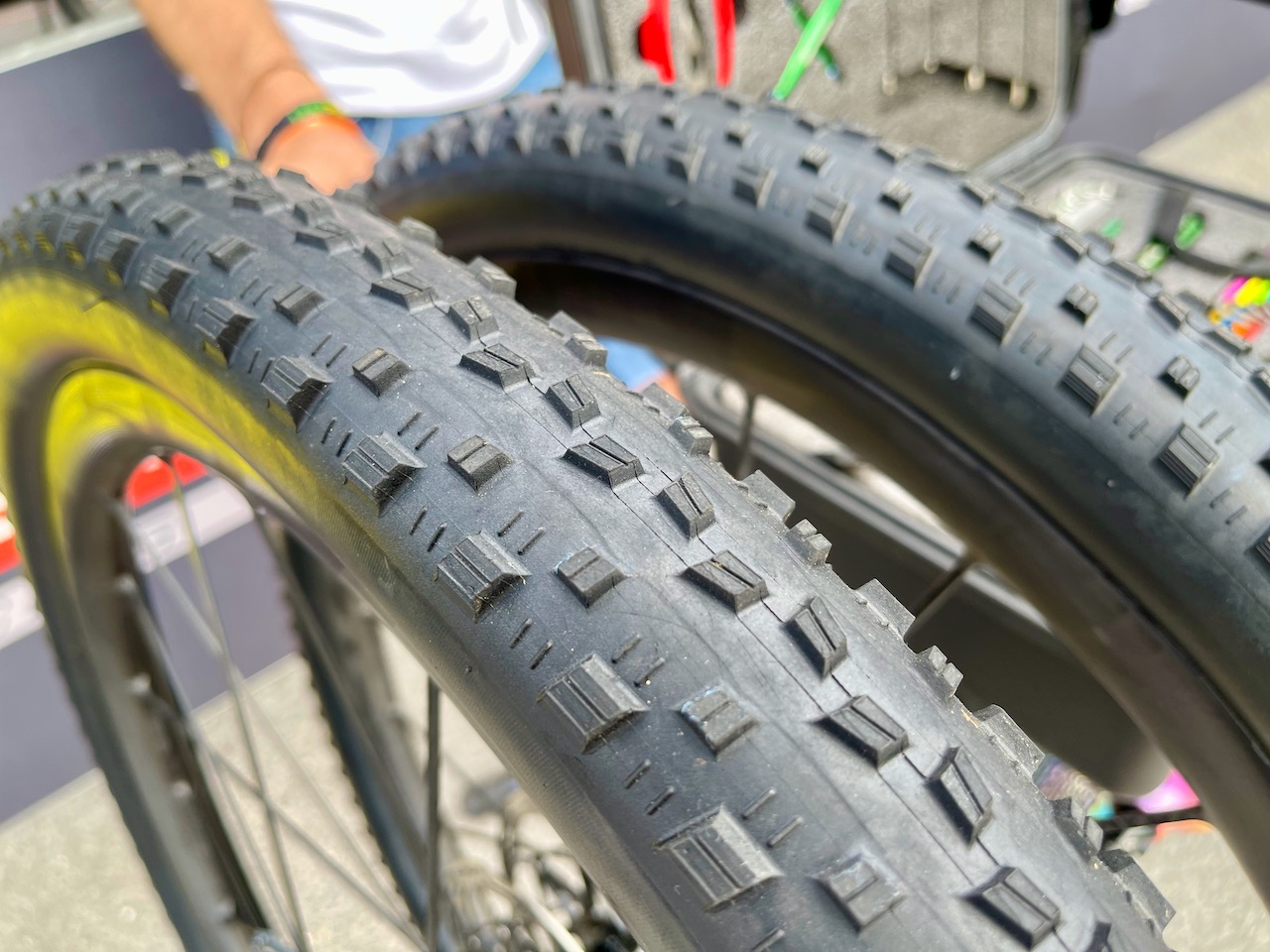 Talk about fast — these tires aren’t the Maxxis Beaver Muds of the past, and they aren’t the EWS & DH mud-hungry Shorties that just debuted this past winter. Instead, these are for speed AND to shed mud. The side knobs look hefty and have enough room to clear any mud before it could pack up.

The small parallel lines aid in mud shedding, and the tight centerline tread is slightly reminiscent of the Dugast Rhino — one of the best mud tires ever. 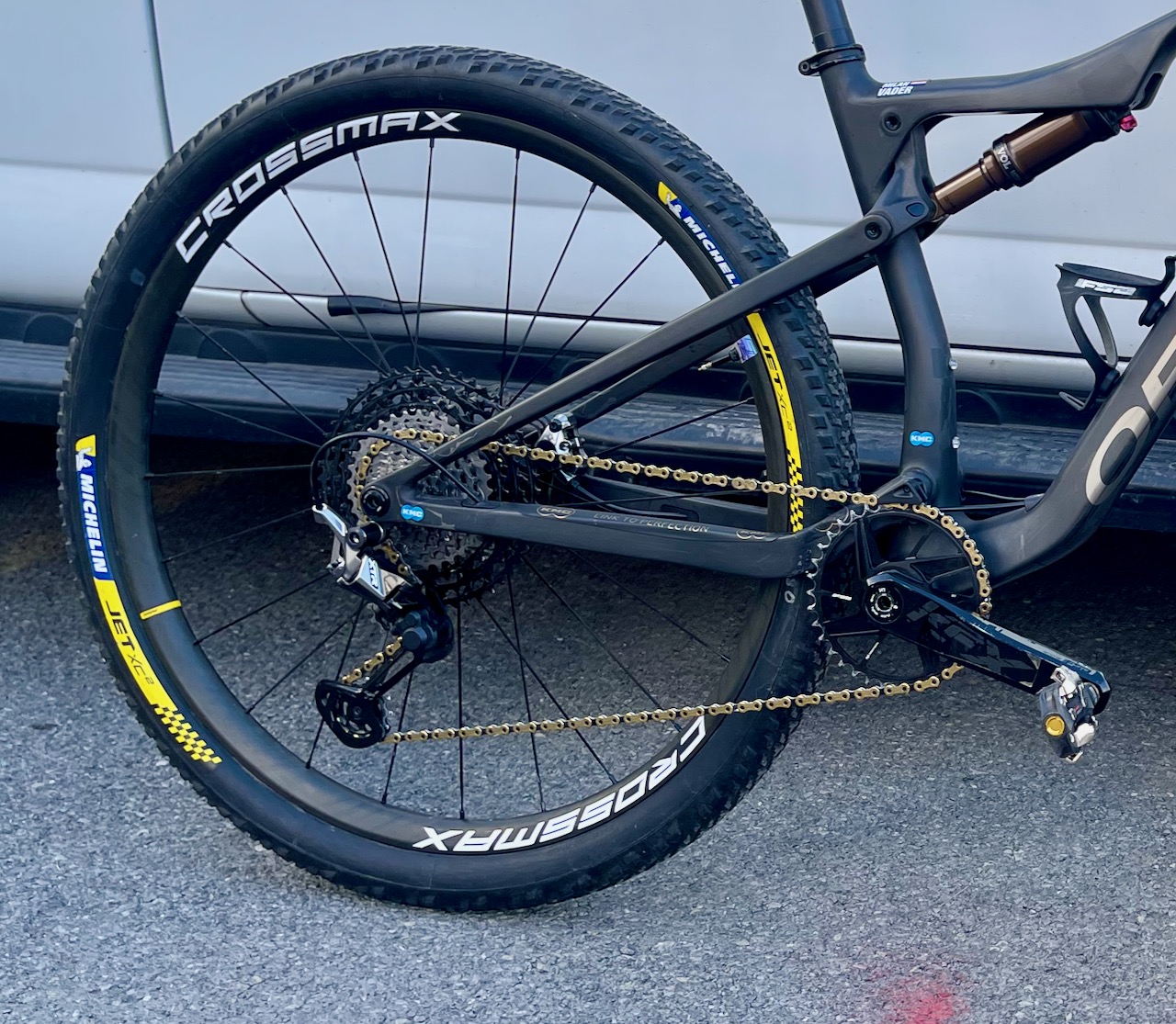 Next, is a fast one from the French KMC-Orbea team — a new Michelin JET2 XC tire. This updated design would replace the current JET XCR tire, and by its look, they are changing quite a bit. 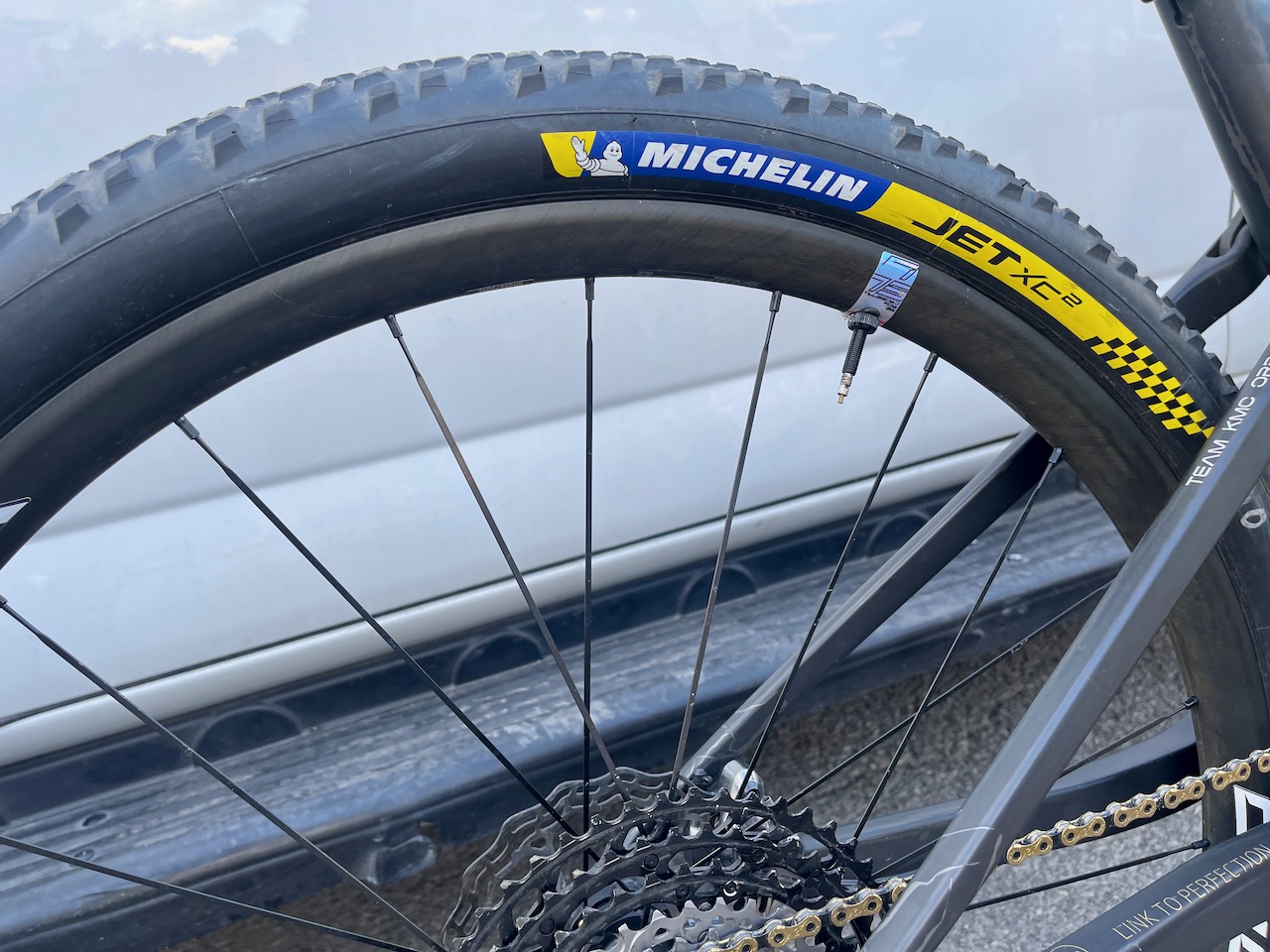 The new design completely forgoes the triangular chevron & arrow lug style, concentrating more on ground contact, and minimized rolling resistance. The edges of the newly sculpted tread appear more rounded than they are sharp. And we can confirm this is in fact a brand new tire, not one with miles of training wear. 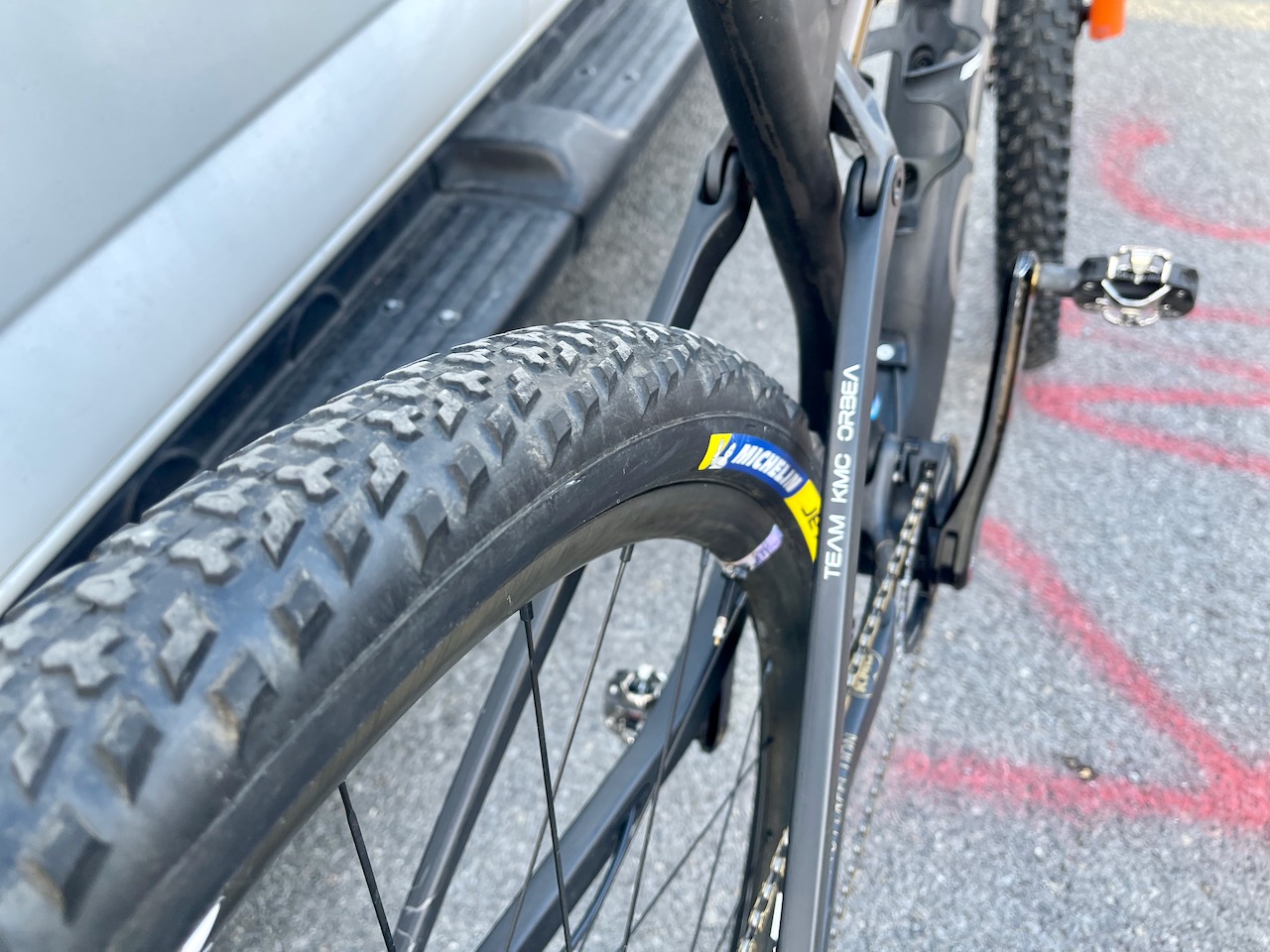 Victor Koretzky and ​​Milan Vader were both running the new Michelin JET2 in the rear paired with a Michelin FORCE2 up front — of which the team was a bit more secretive. 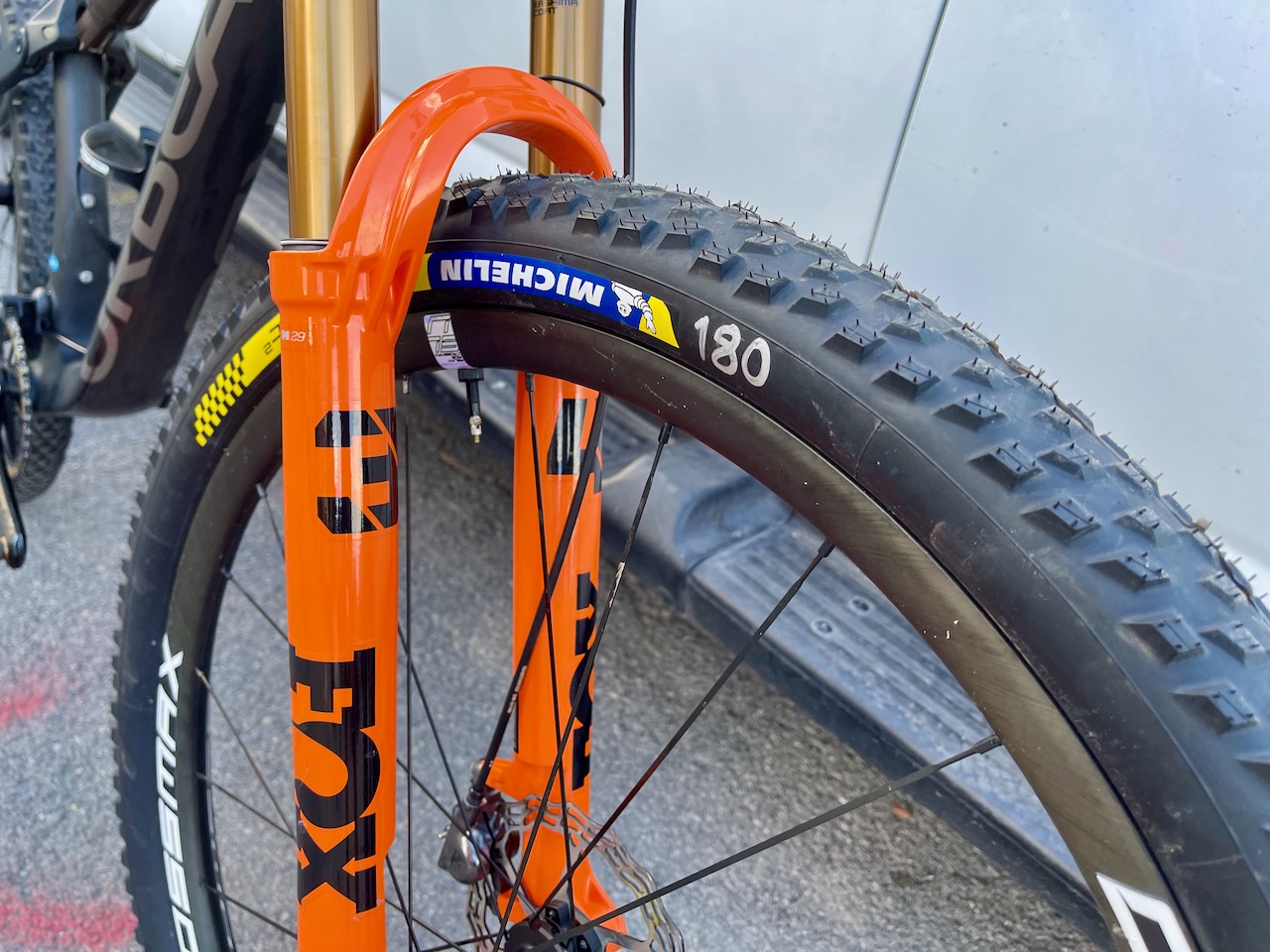 Our guess is that the “180” hand-written on the sidewall could be the thread count for this next gen tire, a nice update from the 120tpi of the current Force XC version. 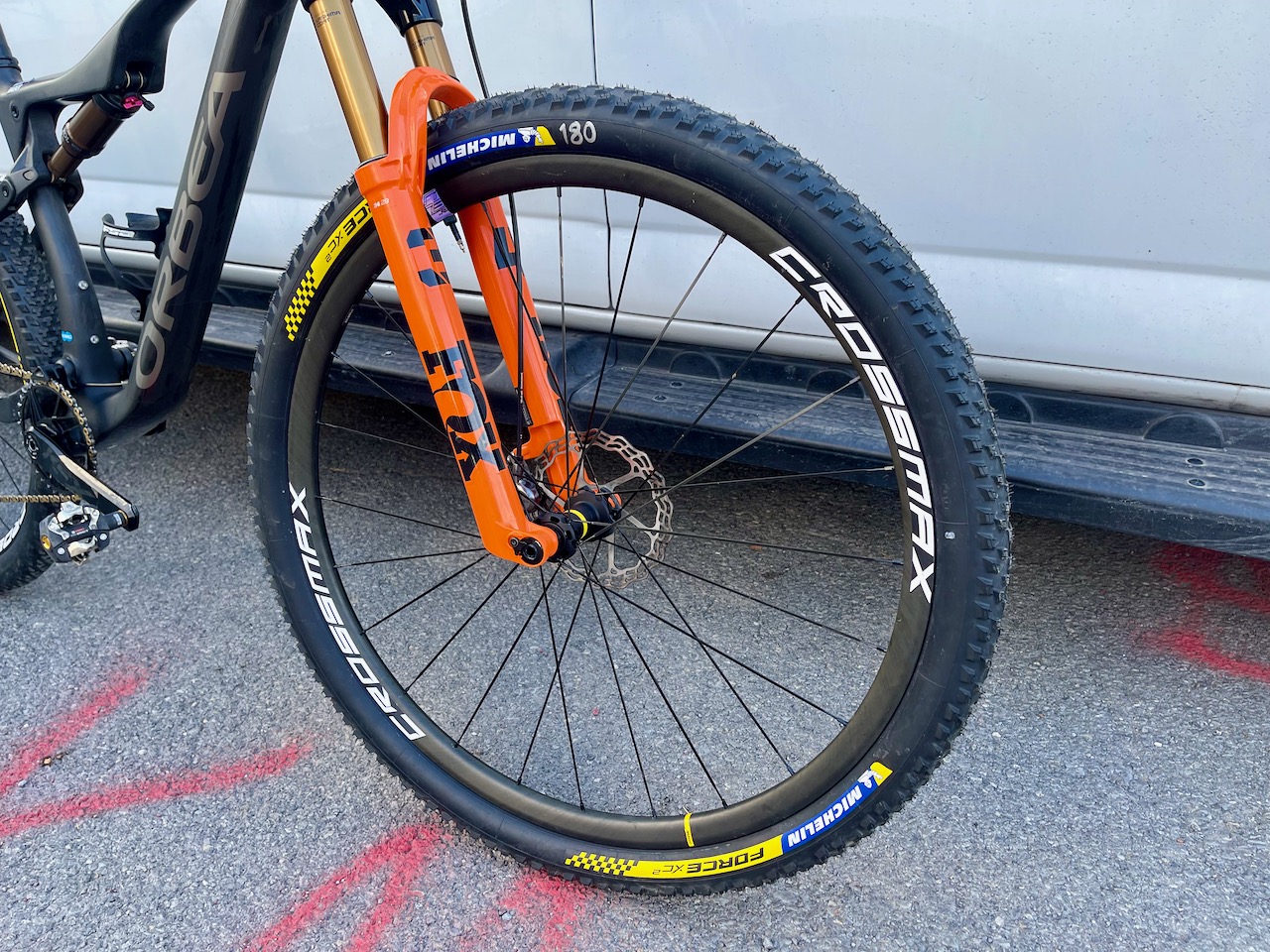 From what we could see, the new FORCE2 had similarly rounded center knobs combined with sharp side knobs, more of a mix than the updated JET2 tread design… 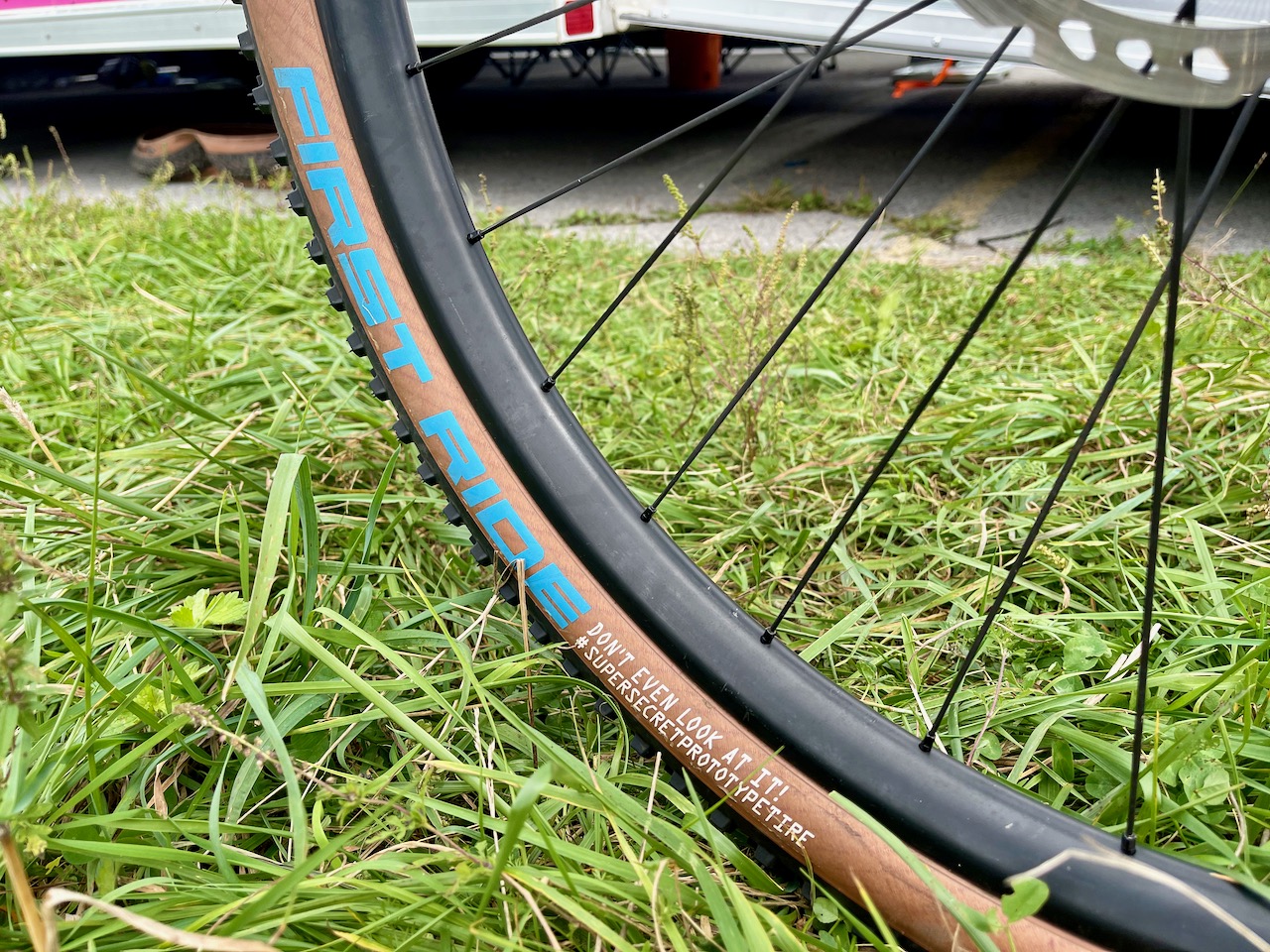 Schwalbe had quite a few riders on prototype tires the weekend of the Snowshoe World Cup. Curiously, these also seem to have also been the athletes that suffered more flats; riders from the KTM PROTEK Team and Avancini were both running the tires.

To be fair, there were many (many) flats all weekend, and luck played a significant role. 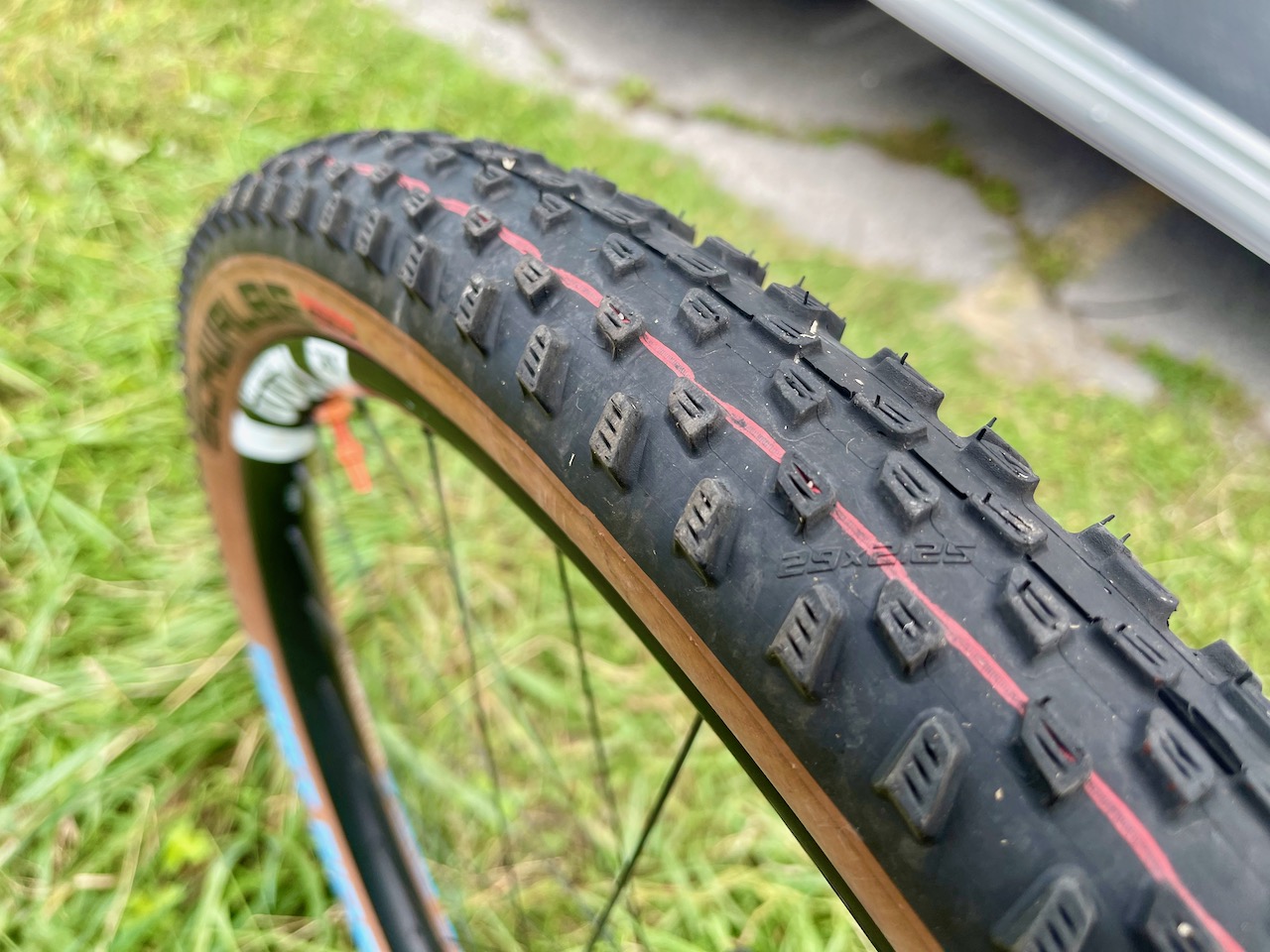 Not much looks to have changed to tire itself. The cornering knobs do appear to be smaller than the production tires and may have more of a rounded-off look than the original. From the red line, we can also be pretty sure it’s the Addix Speed compound. 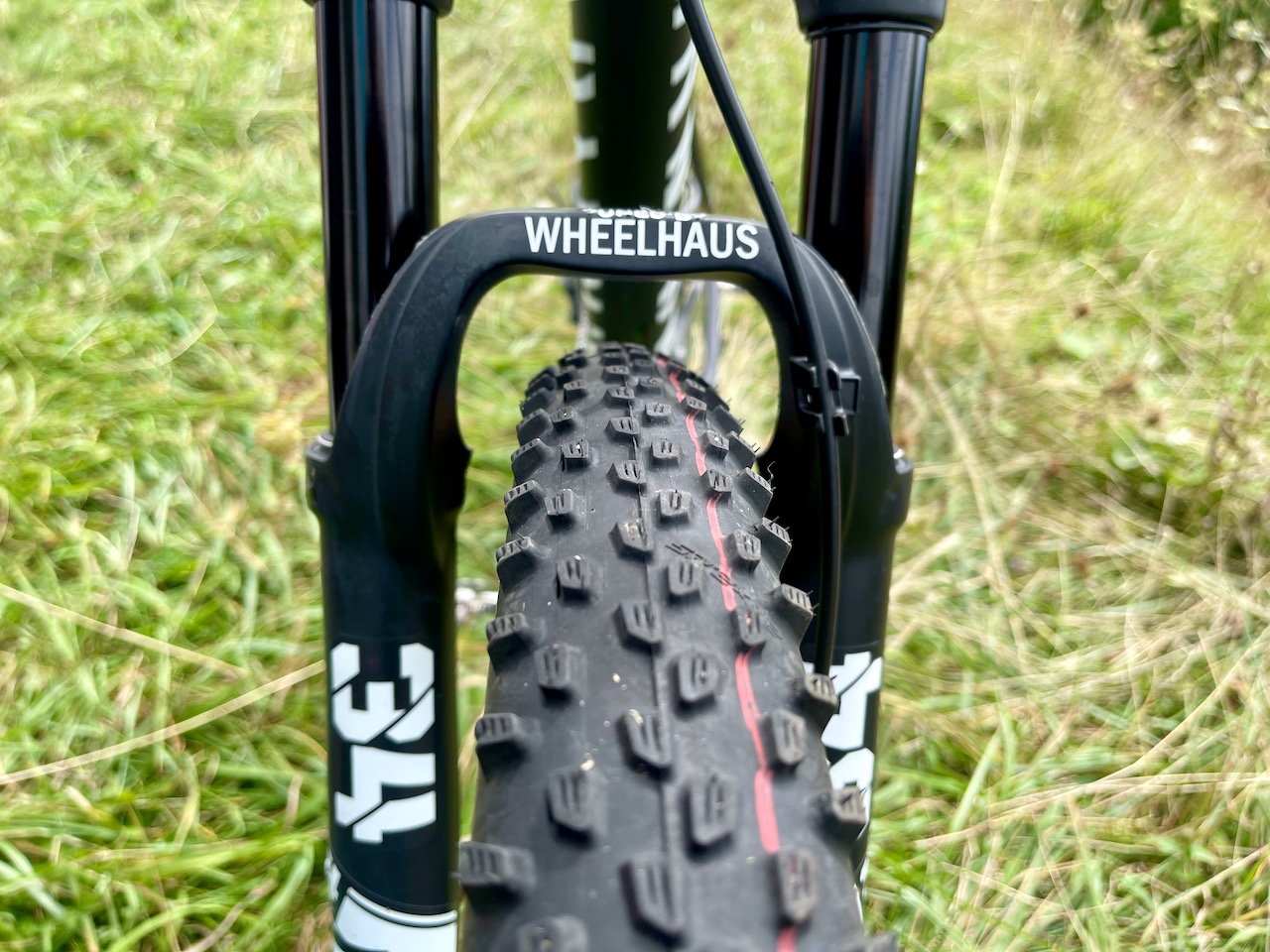 Sometimes the teams will get preproduction equipment with no knowledge of what updates have occurred. For this example, the tire supplier seems to be collecting data on how the tire felt in different racing scenarios, how it held up in the rocks, pressure sensitivity, etc. 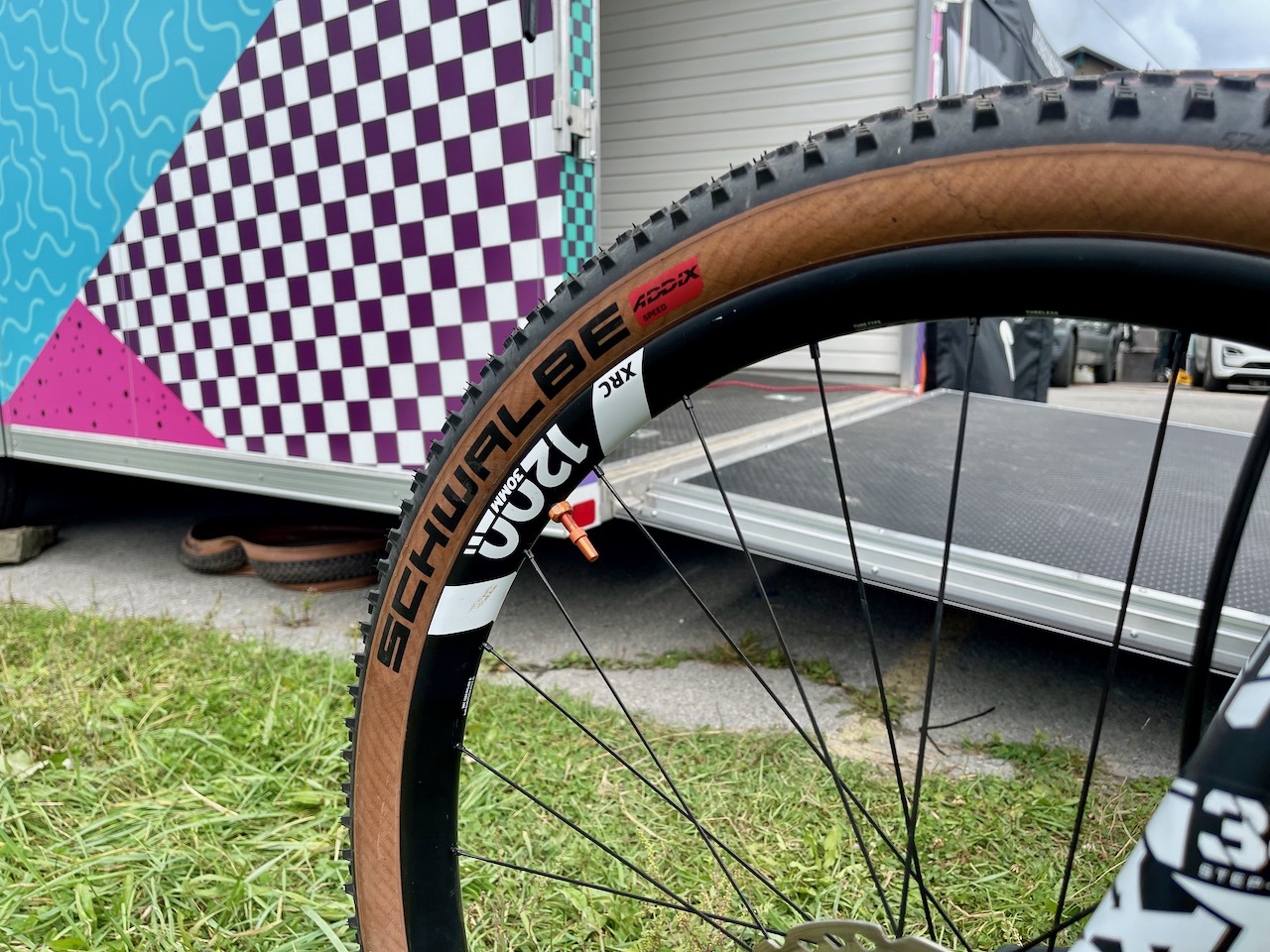 Schwalbe is a tire company always looking to maximize performance. We’re guessing this could be a tweak in rubber compound or a slightly higher thread count casing than the standard Super Race that debuted last summer. Either way, it is intriguing — let us know your thoughts and speculations in the comments!

I’m sure there will be lots of product testing spreadsheets and feedback forms to gather after this last Mountain Bike World Cup of 2021. 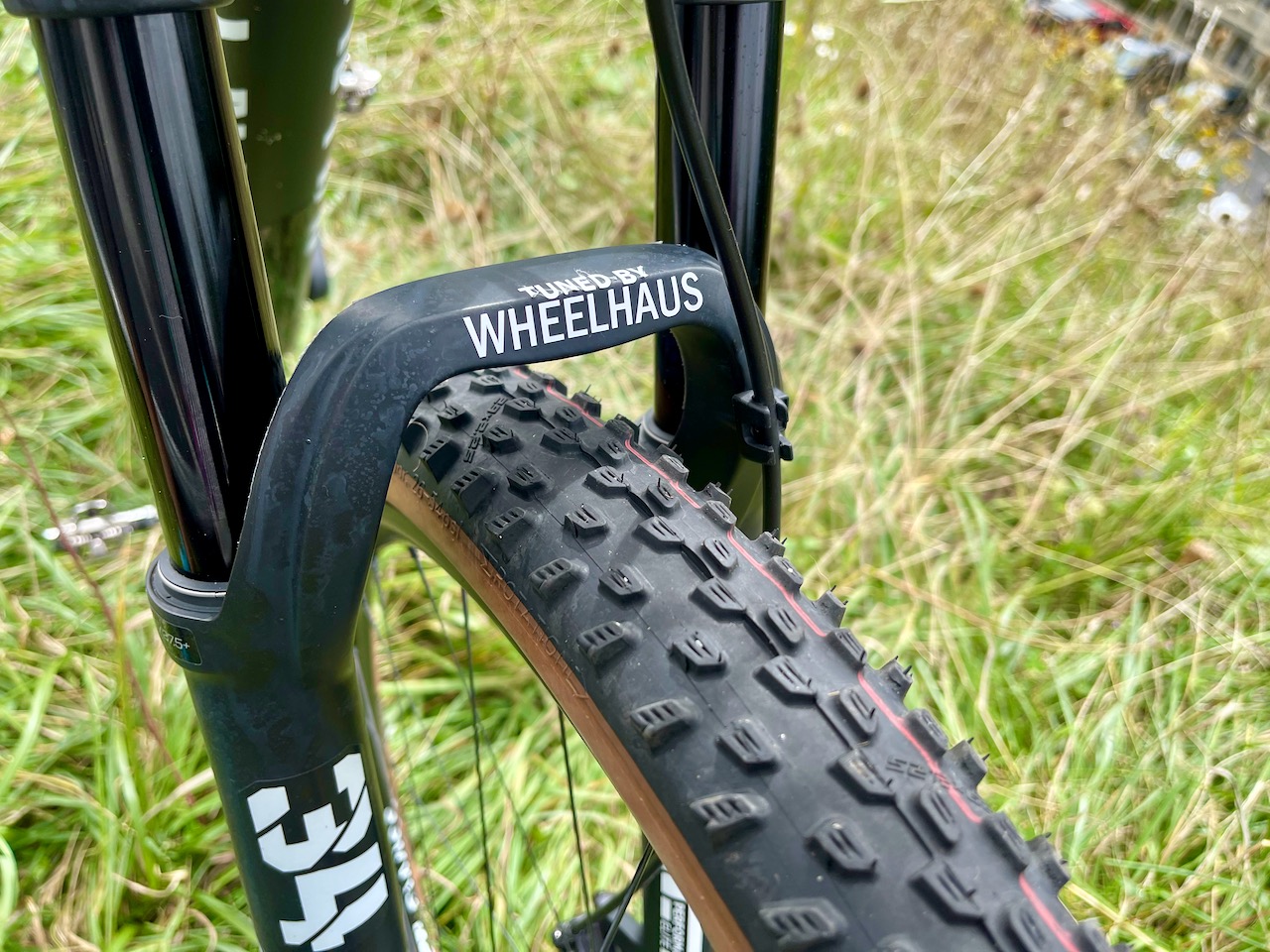 And the result will hopefully be that we’ll all have some faster, better-performing tires down the line because of it…