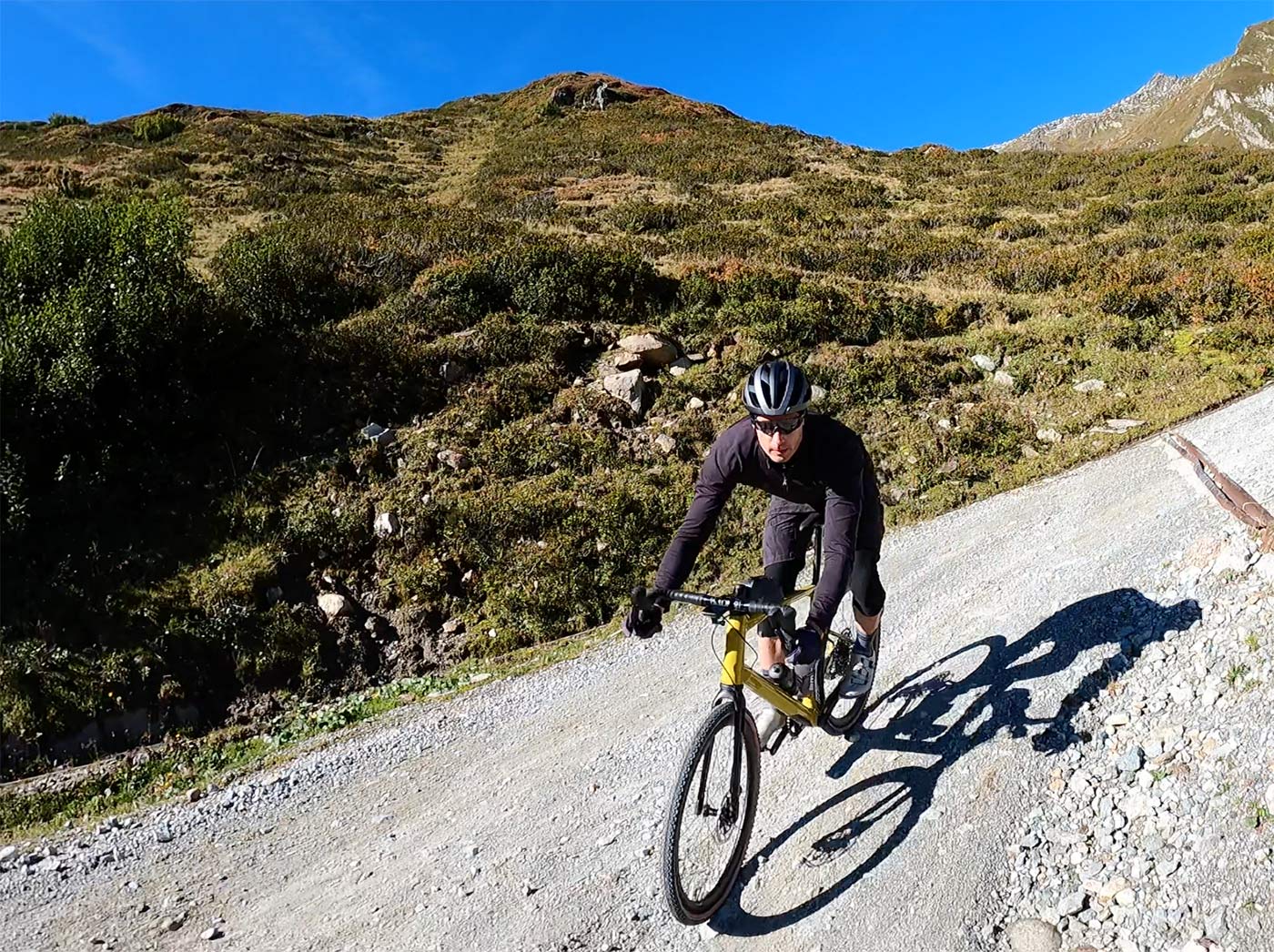 I’ll be honest, the scenery didn’t hurt. But the climb up to the refugio in the Swiss Alps did. Quite a few glasses of Swiss red wine that night and staying up chatting with their team until nearly 1am probably hurt a little, too.

On the first full day of BMC’s new all-road and gravel bike launch, we rode the updated Roadmachine X up for what seemed like forever. In fact, it was 13% grades straight out of the gate, and rarely dipped below 4%. The final stretches were gravel, much of it loose, and topped 20% in stretches.

And all of this was on the not-quite-a-gravel-bike bike. The fun stuff, and the new BMC URS LT, was to come the next morning…

First, a word on the Roadmachine X 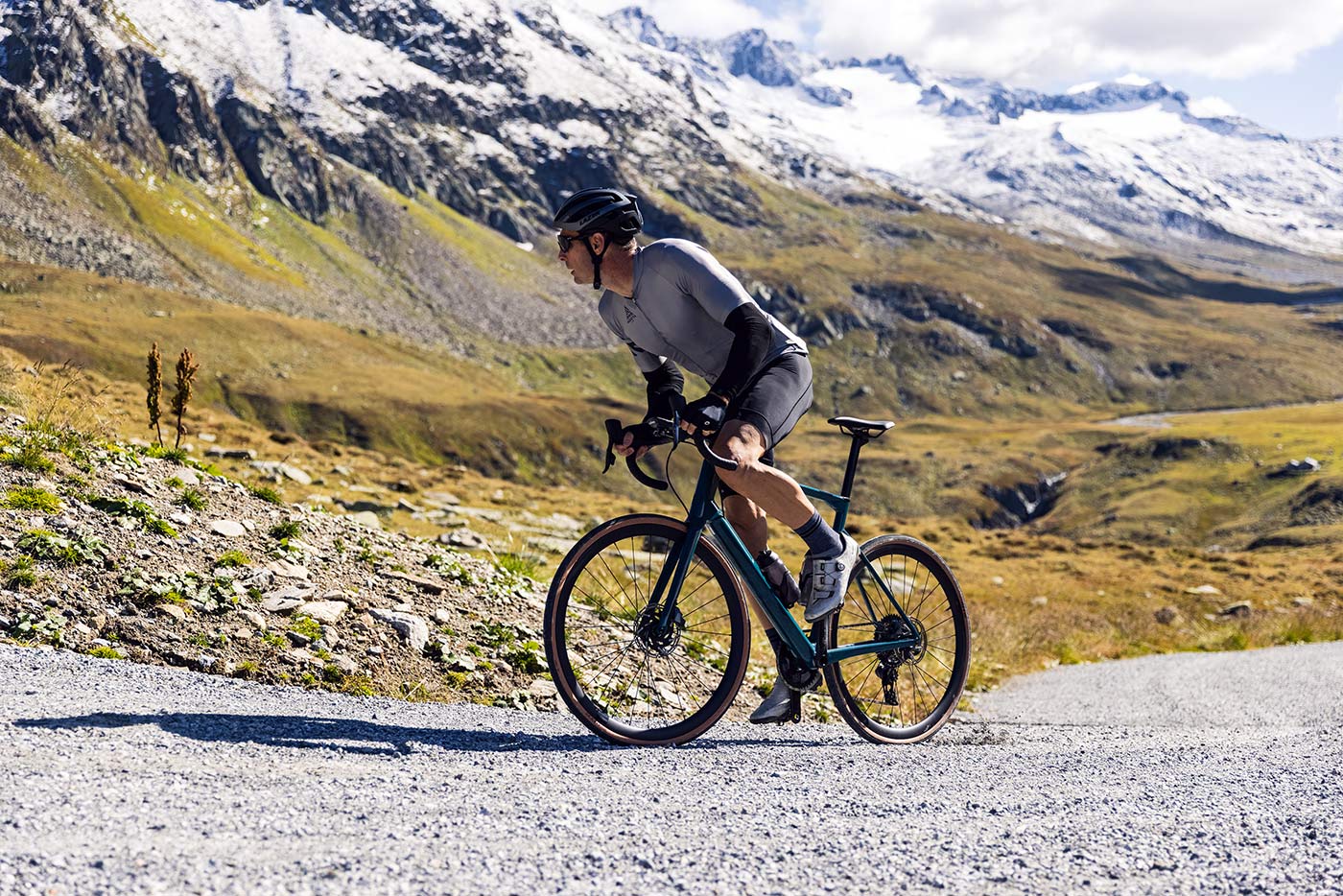 Shown above is the new Roadmachine X. Suffice to say, if you’re just looking for an endurance road bike that could handle the occasional Belgian Waffle Ride, this is that bike. It’s fast, light, and can fit 33mm file-tread tires, which was about all that I needed for the inaugural BWR NC.

And it’s about the perfect kind of road bike for riders that hit a few mixed surface paths or farm roads on their adventures, but mostly stick to pavement. There’s not a lot more I need to say other than it’s a perfectly capable, perfectly fast, and perfectly comfortable Gran Fondo bike that can do a little extra. Worth a look.

But when things get rough, get the URS LT 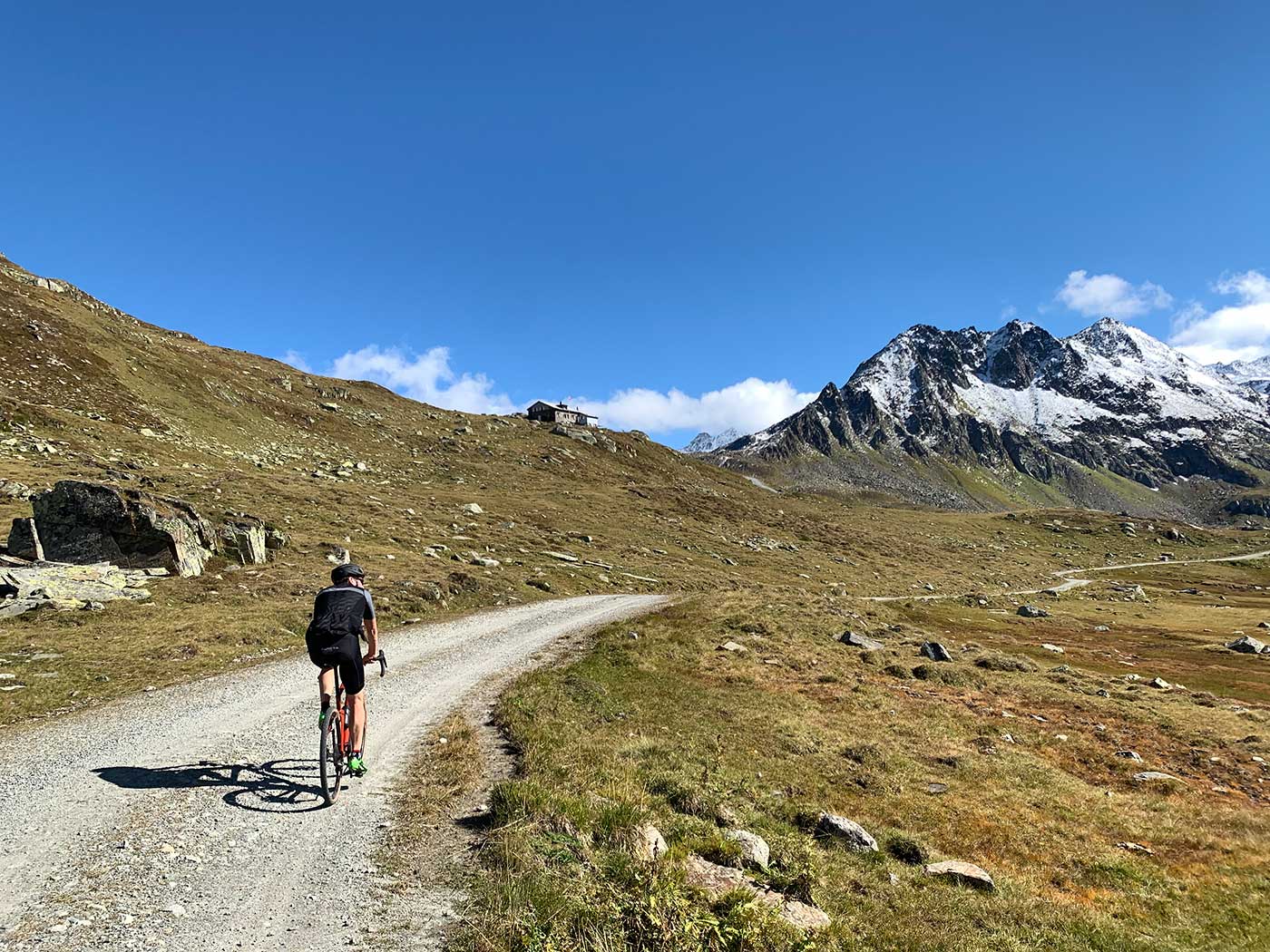 The mountain hut from whence we started our descent on the URS LT.

I prefaced this review with the conditions upon which our ride began for good reason. A prior day with 5,144 feet of climbing (over just 17 miles!) followed by a late night of good drinks and sleeping in bunk beds at elevation was, well, fun. But maybe not restful.

Regardless, I can’t remember the last time I’ve hopped on a bike and immediately felt as confident bombing down loose, occasionally rutted, gravel roads as I have on the new BMC URS LT.

Quite literally, our ride started by bombing down the 3.5 mile mountain pass that we’d climbed the afternoon prior. You can see it in this video:

There’s also a good technical overview of the MTT suspension fork and the rest of the bike in this video and our URS LT launch coverage if you’d like to know more about its features and tech. 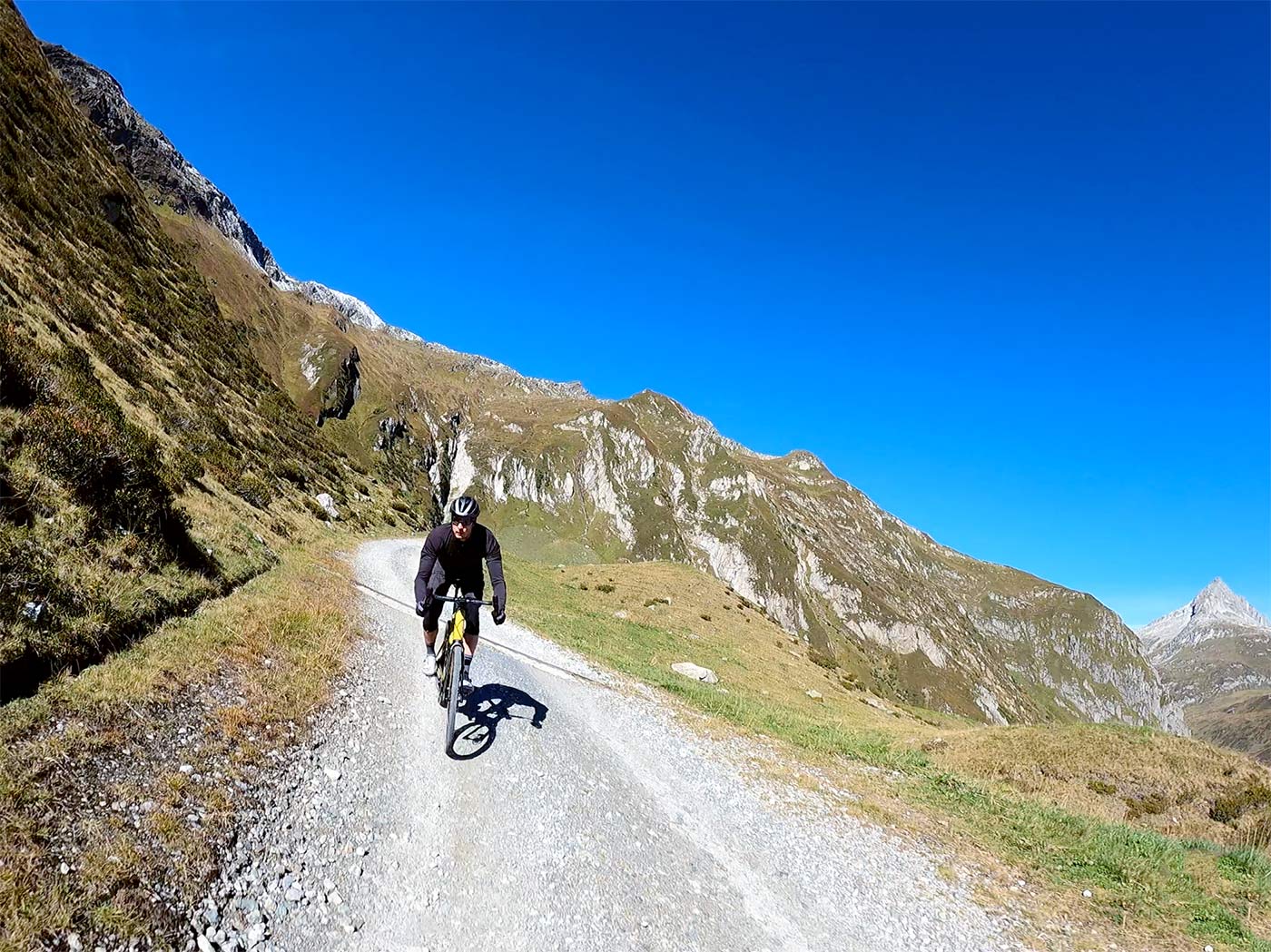 The descent down the mountain pass had metal-inlay water bars, choppy corners, dips and ruts, and a lot of smooth-ish hardpacked gravel road covered in loose rocks. In other words, all the fun stuff that properly tests a gravel bike’s ability to hold a line and not scare the crap out of a rider.

And the URS LT handled it perfectly. There was no apparent learning curve to the bike, and the geometry and handling felt dialed…which, in hindsight, shouldn’t have been a surprise. Our team liked the original URS, and since the addition of 20mm of front travel didn’t change the geometry at all, it’s no surprise this bike handled just as well, only better.

It’s surprising just how much that little bit of travel improved the ride quality. But more importantly, how much it improved traction and control. 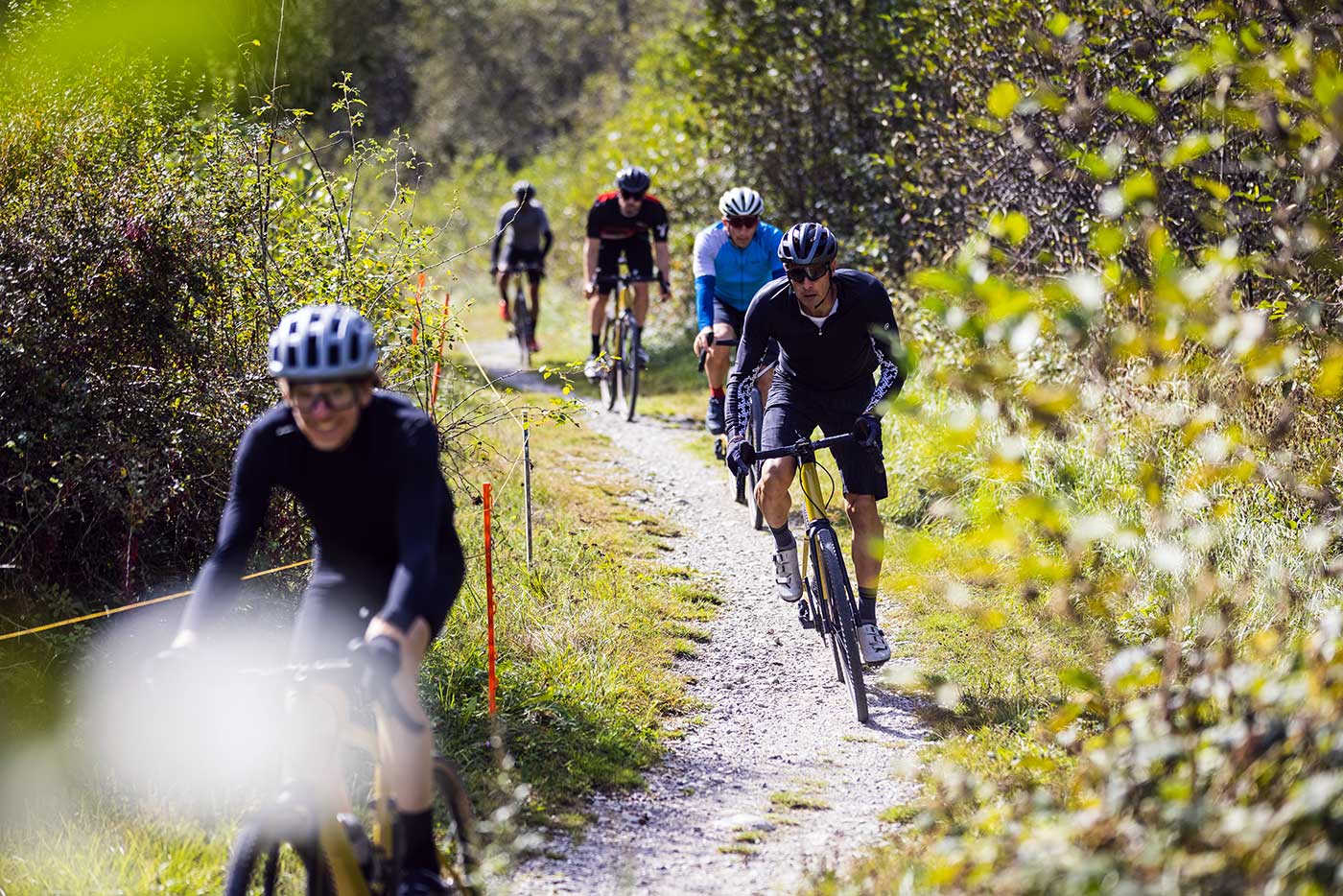 The rest of the ride flip-flopped between mountain roads (with several high speed descents filled with swooping corners) and gravel trails and double track. 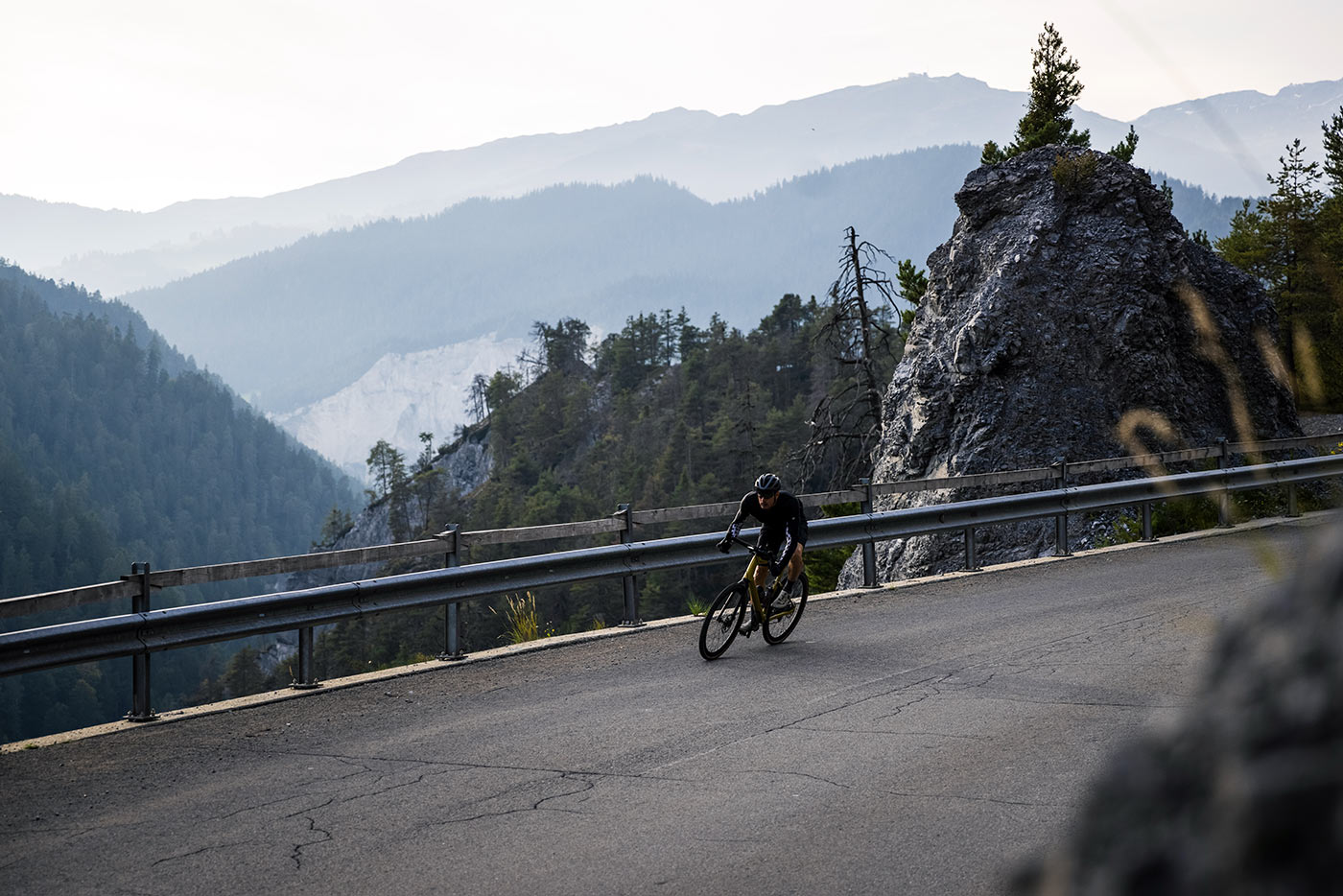 The URS LT’s road manners are lovely, offering a stable ride that makes it easy to stay in a paceline or keep your place in a pack. And when it’s time to rail the corners, the only thing that held me back was the knobby WTB Radler 700×40 tires.

While perfect offroad, the bigger side knobs had me holding back (just a bit) on the road’s fastest corners. Of course, tires are meant to be swapped based on conditions, and overall I think the Radler was a good spec choice because it highlights the URS LT’s offroad capability very well. Even it’s size highlights one of the bikes’ strong points… 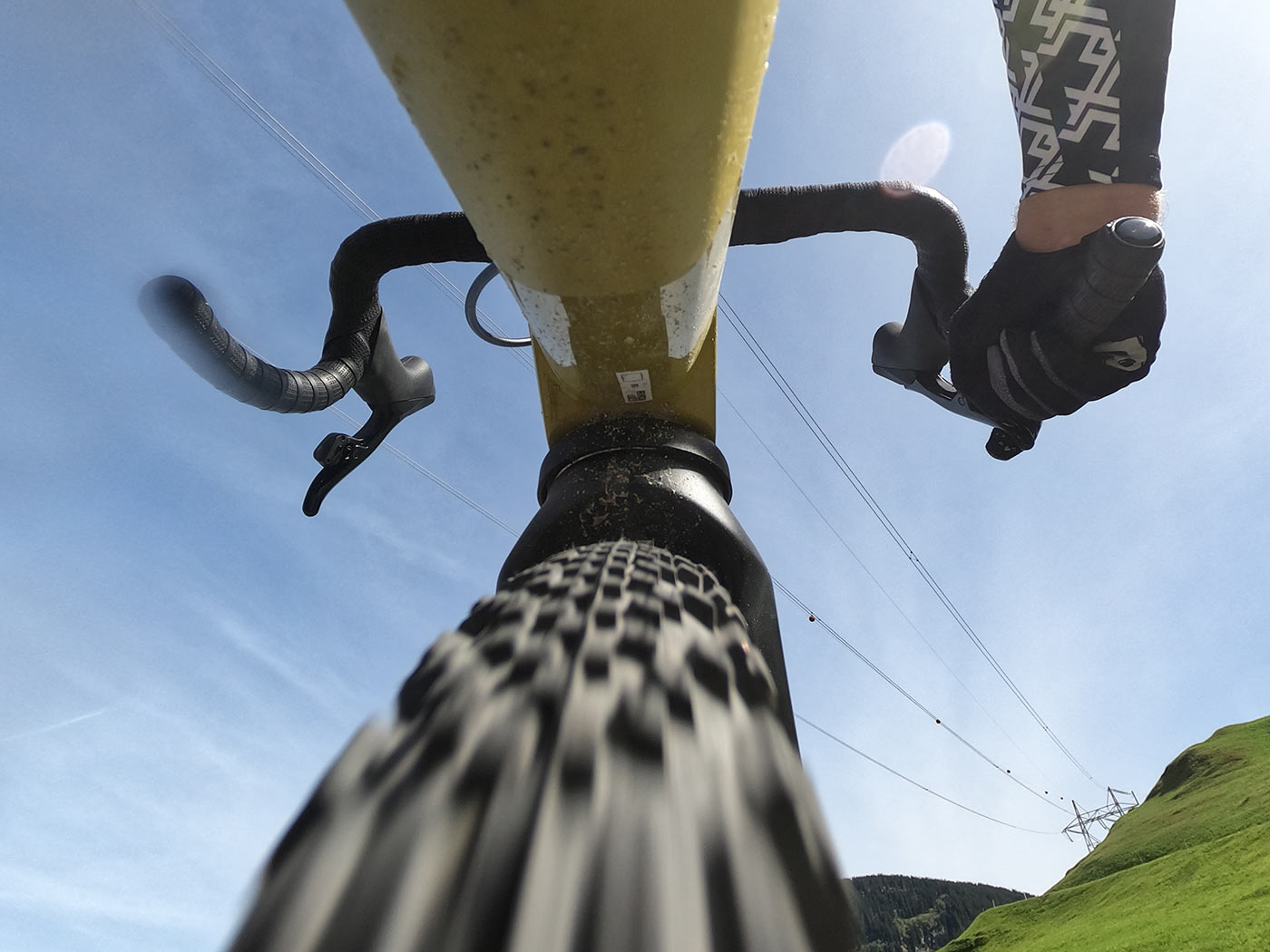 BMC says that the suspension does the work many of us assign to our tires. Meaning, we run bigger tires to add some cushion to the ride, setting them up tubeless at lower pressures to gain traction and comfort.

With the flex coming from the rear end’s elastomer micro suspension, and the fork’s 20mm of damped, well-controlled coil-sprung suspension, 40mm tires were plenty. The bike fits up to 700×45, but I suspect many riders will find that the right 40mm tires provide all they need, and can be run at slightly higher pressures.

The benefit to keeping them a bit more inflated means less risk of pinch flats. By no means did I have my tires overinflated…glancing down at them showed plenty of squish, but they were probably a few PSI higher than I’d normally run. It felt great, with no squirm when we hit the paved sections, and I think that’s the point…get the best of both worlds on all surfaces. 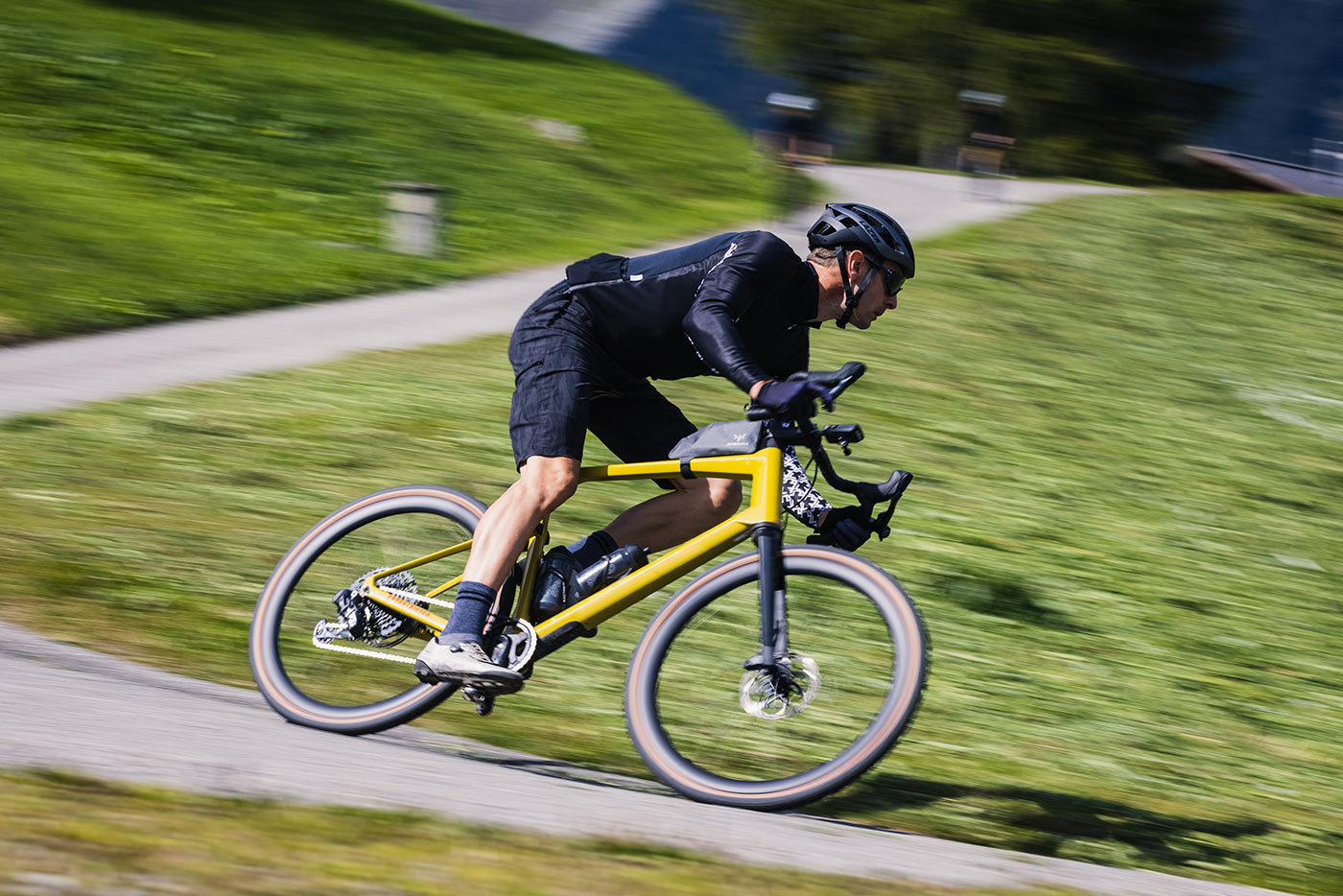 The URS LT shares the URS’ original geometry, which has a slack 70º head angle, modern reach figures, and a short stem. The combination works well both on and off the road. It’s not too stretched out, and it remained easy to weight the front wheel to drive it through the corners…both on and off road. 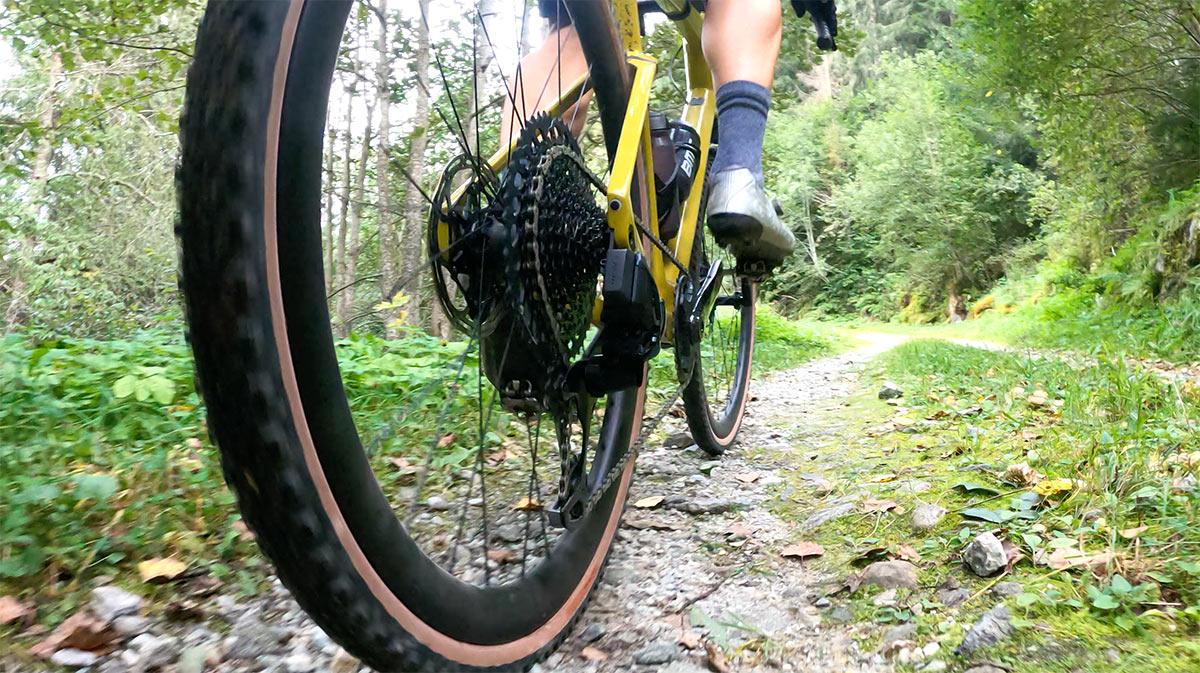 BMC says traction, control, and rider comfort were the key aims, but the goal of all that was to “create speed”. Because a confident, comfortable rider can go faster, for longer. 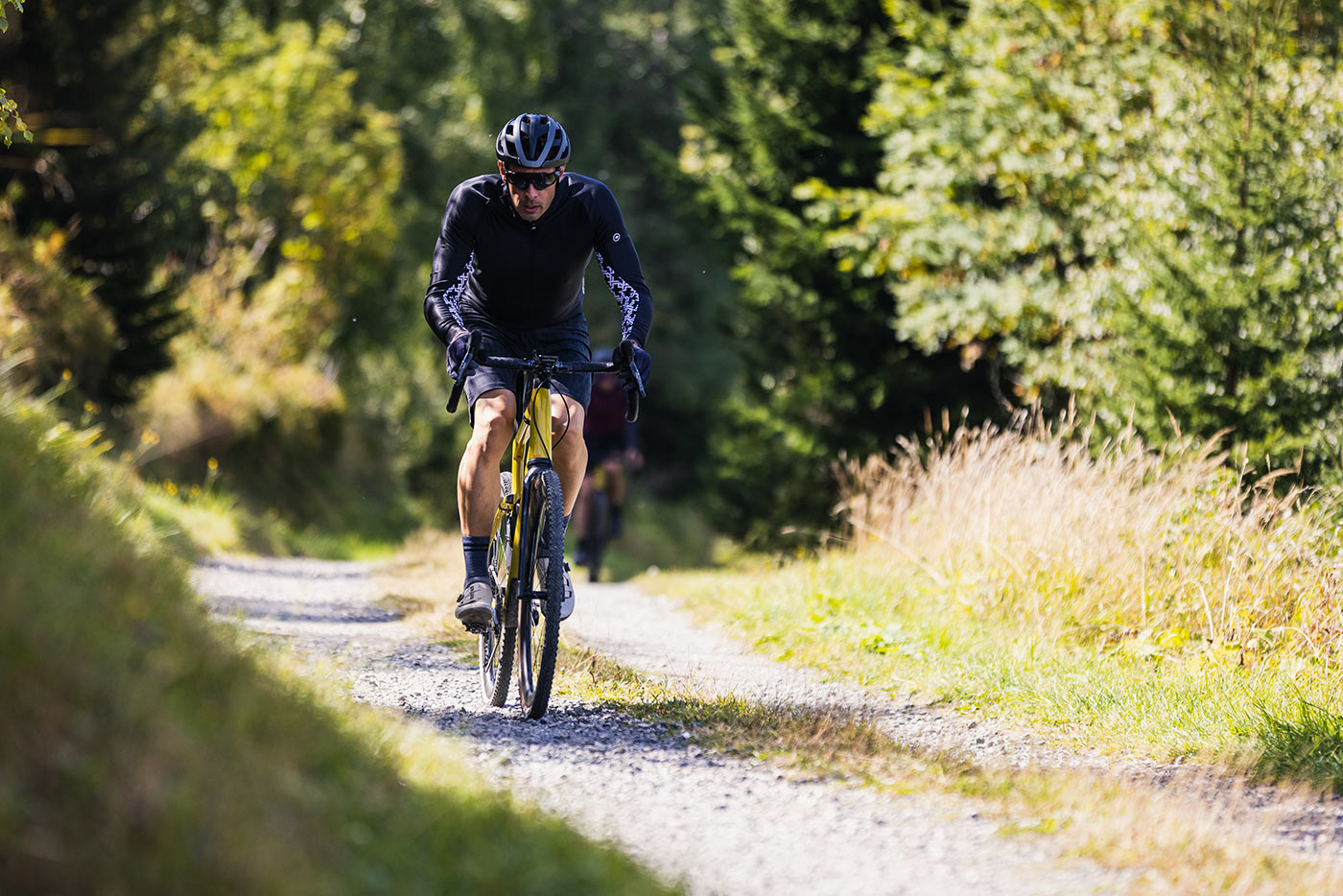 Most photos courtesy of BMC by Jérémie Reuiller.

Even with alloy bars and ~40mm deep carbon rims, my hands and arms weren’t ready to give up by the end of the day…and it was an all-day ride from the hut back to Chur.

While there are normal telescoping gravel suspension forks from all the major players now, and Lauf offers a lighter fork with slightly more travel, for most gravel riding and racing, I think the URS LT’s suspension hits the sweet spot between weight and performance. And it sticks it on a bike that’s fast, fun, and handles great.

Definitely worth a look if you’re a gravel rider who regularly seeks out rougher roads, hits the singletrack now and then, or just looking to get through those 100+ races without feeling beat up.