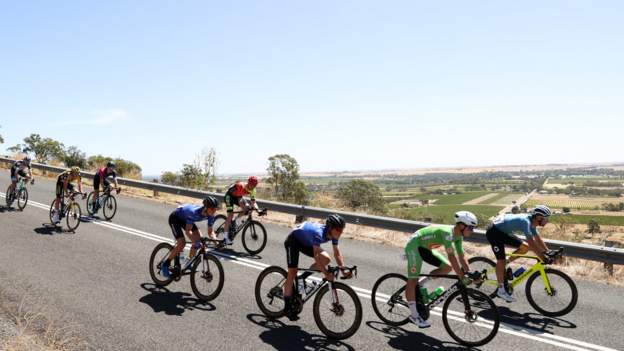 Australia’s Tour Down Under has been cancelled for the second year in a row because of the Covid-19 pandemic.

Restrictions in Australia made it difficult for teams to travel to the event, which was due to be part of the men’s UCI World Tour and women’s UCI Pro Tour.

The Tour Down Under is traditionally the first Tour race of the season.

“We have fully explored all avenues,” organisers Events South Australia said in a statement.

“But unfortunately in the end it was the border closures and quarantine requirements for more than 400 people that make up the international teams that proved to still be too difficult to overcome.”

Organisers said they will instead hold a domestic event called Santos Festival of Cycling from 21-29 January in Adelaide and South Australia.

The cancellation comes on the day it was decided Sunday’s National Rugby League final between Penrith Panthers and South Sydney Rabbitohs would be played in front of a reduced crowd of 39,000 in Brisbane, because of new restrictions in Queensland.

And it follows the calling off of England’s netball’s tour to Australia, also because of restrictions making it logistically difficult.

In cricket, the England men’s Test team is waiting to learn the touring conditions for the Ashes in Australia at the end of this week. The players will then have the weekend to decide on their participation in the series, which begins on 8 December.