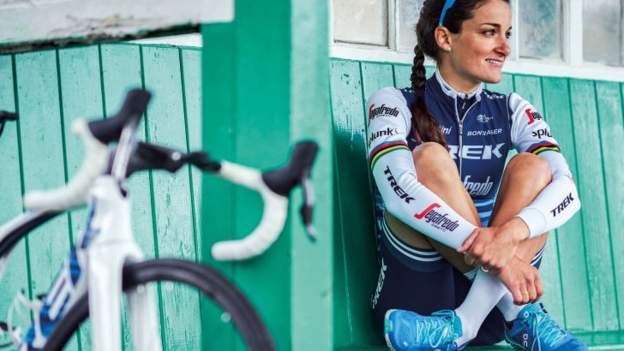 Across 125 years, the toughest men in one of the toughest sports have been left broken on the narrow cobbles of Paris-Roubaix.

The legendary race returns this weekend and, for the first time in its history, women will be competing on the brutal ‘pave’.

In the lead-up to the race, Britain’s Lizzie Deignan echoed the sentiments of many in sport, saying a women’s version of the event “should have happened a long time ago”.

“Unfortunately it didn’t, but we’re making progress,” she added at her Trek-Segafredo team’s base for the race in France. “It’s a reflection of the respect women’s cycling is gaining.”

Known as the ‘hell of the north’, the race to the small French town of Roubaix on the Belgian border takes in unique parcours of bumpy, narrow cobbled farm tracks which leave riders shaken and covered in dust – or plastered with mud if it’s raining.

And the wet stuff is forecast for this Saturday, when the female riders tackle a 160km course on which they will be hammered by rough stones for hours, before those who have survived the onslaught sprint it out for victory in Roubaix’s open-air velodrome.

“Physically, it’s going to be one of the most demanding races,” said Deignan, 32, after trying out a section of the pave with her team-mates.

“It’s different to what I was expecting. Physically it’s more draining than I expected but, in terms of skill level, I feel comfortable.”

Given the race’s unique route, it is hard to tell who will come out on top from the women’s peloton, but the race is known to favour the tougher, more powerful riders who can sprint and adapt quickly to changes in conditions.

Deignan, the 2015 road world champion, is one of the strongest one-day racers on the Women’s World Tour. But she is up against the sport’s best riders, including team-mate Elisa Longo Borghini, Marianne Vos of Jumbo-Visma and Chantal van den Broek-Blaak of the mighty SD Worx.

In a sport that sees an elite group of riders hoovering up most of the victories across a season, Deignan believes this race could be the most unpredictable.

“This peloton hasn’t raced over cobbles before,” she added. “I think it will be on from the start. It’s not a long race and, on the cobbled sections, there’ll be fireworks. You simply can’t ride over these cobbles easy.”

Men of the moment and wily domestiques

For the men this Sunday, the challenge is even more arduous, with a 258km course that has never seen a British rider victorious.

This year, promising 21-year-old Jake Stewart will contest the race for his French Groupama-FDJ team, against some legends who have already lifted the trophy – a cobblestone, of course.

Former winners such as Bora-Hansgrohe’s Slovakian star Peter Sagan and the evergreen Philippe Gilbert of Lotto-Soudal line up against men of the moment Wout van Aert of Jumbo-Visma and Alpecin-Fenix’s Mathieu van der Poel.

But the race is a lottery. So keep an eye out for wily domestiques such as Welsh duo Luke Rowe and Owain Doull of Ineos Grenadiers – a team that doesn’t just do the cleaner, longer Tour de France.

They are there to get their hands dirty. As are the women – finally.