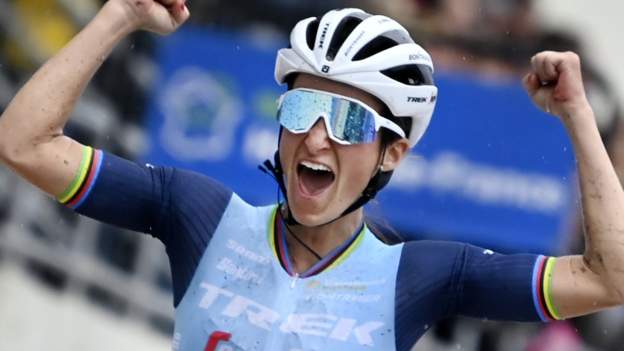 Britain’s Lizzie Deignan took a sensational breakaway win in the first edition of the women’s Paris-Roubaix.

The Trek-Segafredo rider pulled away from the peloton with more than 80km to go, before rain affected the course.

The legendary race on the brutal ‘pave’ cobblestones returned this weekend after the coronavirus pandemic caused it to be postponed in 2020.

“I feel so incredibly proud – women’s cycling is at a turning point and today is a part of history,” Deignan said.

“I’m also proud to be part of a team making history, and even fans watching at home are making history to show there’s an appetite for women’s cycling – and that these athletes can do one of the hardest races in the world.”

Deignan powered away around halfway through the 116km race before the riders reached the unforgiving cobbled sections that permeate the race known as the ‘hell of the north’.

The 32-year-old took cobbled corners covered in mud gingerly to stay on the bike to protect a lead of two minutes 30 seconds.

She then also revealed after the race that she was not the rider her team had initially selected for the victory: “[Winning] was really not the plan – I just needed to be at the front on the first section of cobbles to protect the leaders – today I was third rider.

“I looked behind after the first cobbles and there was no-one behind me, so I thought they have to chase me so, I just kept going.”

Jumbo-Visma’s Marianne Vos of the Netherlands broke away from a group of 19 riders chasing Deignan and halved her lead by 10km to go.

However, Deignan brilliantly held on to the bike as her rear wheel slewed left and then right across the mud on the treacherous Camphin-en-Pevele sector.

Deignan, who has won the road world championships, Tour of Flanders and the one-day women’s Tour de France, beat the sport’s greatest riders to lift the famous cobblestone trophy.

She crossed the line in soaking wet Roubaix outdoor velodrome ahead of Vos in second and team-mate Elisa Longo Borghini of Italy third.

Deignan will contest the Women’s Tour of Britain from Monday, while the men contest a 259km edition of Paris-Roubaix on Sunday.