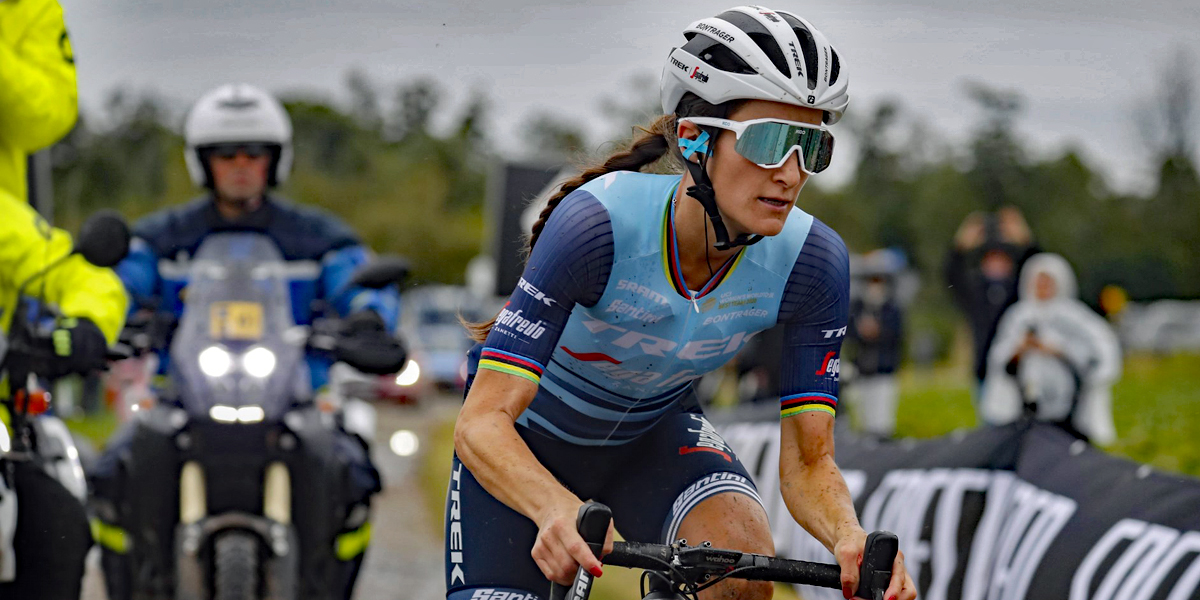 Race Report: Trek-Segafredo’s Lizzie Deignan is the winner of the first women’s version of the cobbled Classic Paris Roubaix. With a surprisingly long solo ride, the British girl held off top favourite Marianne Vos (Jumbo-Visma) for a truly historic win.

Elizabeth Deignan won the first edition of Paris-Roubaix for women. The Trek-Segafredo rider attacked on the first cobbled section and evaded the chasing Marianne Vos. 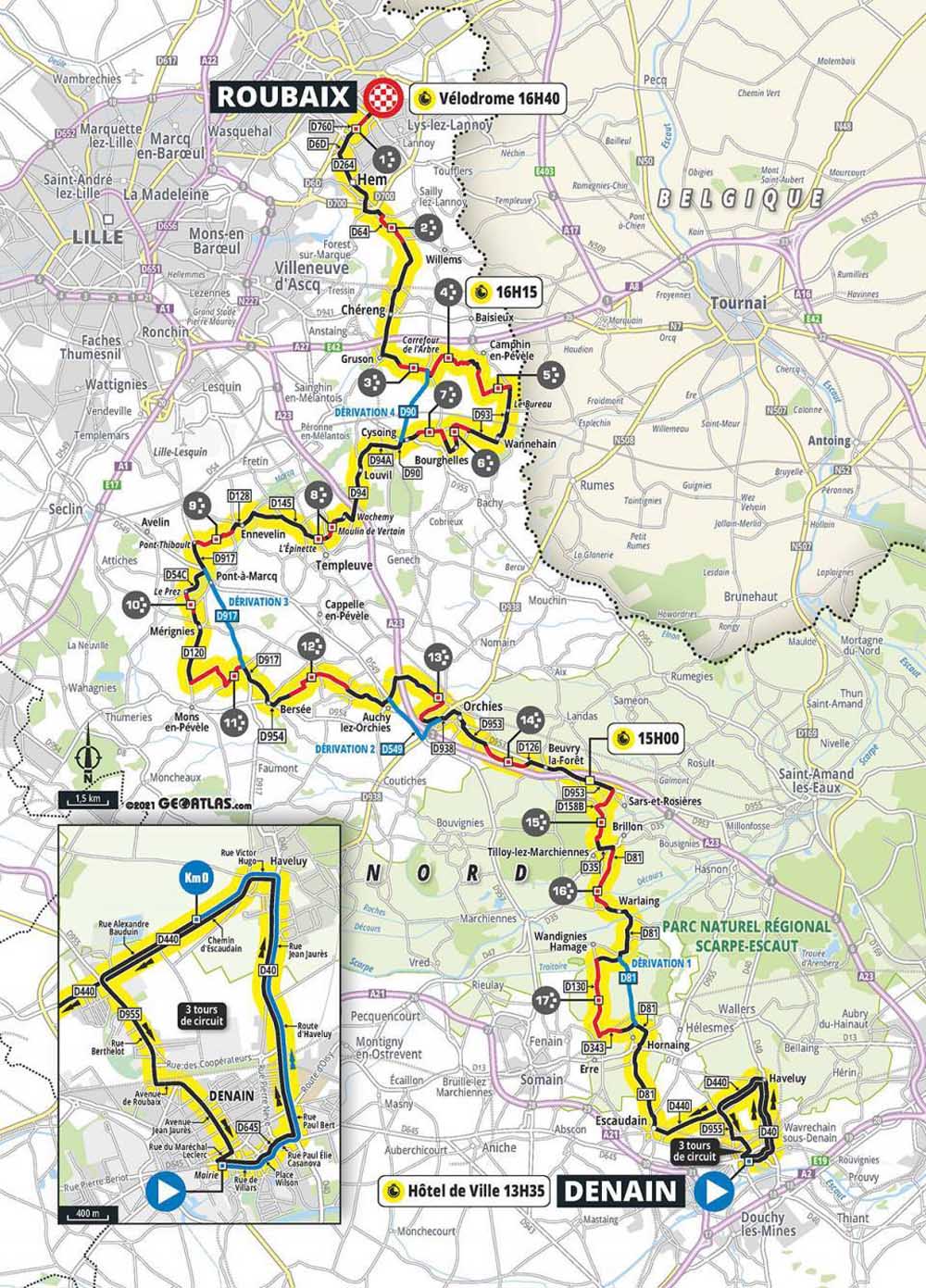 The start on Saturday in Denain, near the border with Belgium. Three opening laps round Denain of 8.3 kilometres, including a neutralised zone. After about twenty kilometres they leave Denain and head towards the Hornaing à Wandignies (3700 metres), a tough four star section, 82.5 kilometres from the finish. From then on the women follow the same route as the men on Sunday. After Hornaing à Wandignies there are sixteen cobblestone section. Templeuve (section eight) is split in two. In total there are six sectors with four or the maximum five stars. The most famous two are Mons-en-Pévèle (48.6 kilometers from the finish) and the Carrefour de l’Arbre (17.2 kilometres out). The women have to cover 29.2 kilometres of cobblestones. In a race of 116.5 kilometres that is a percentage of 25.1%, a quarter of the race before they finish in the Vélodrome of Roubaix. 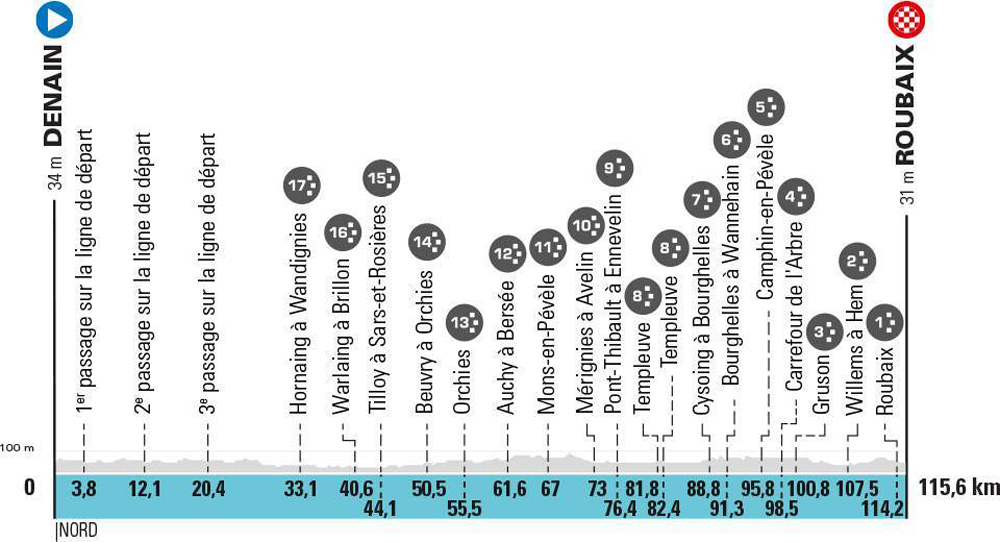 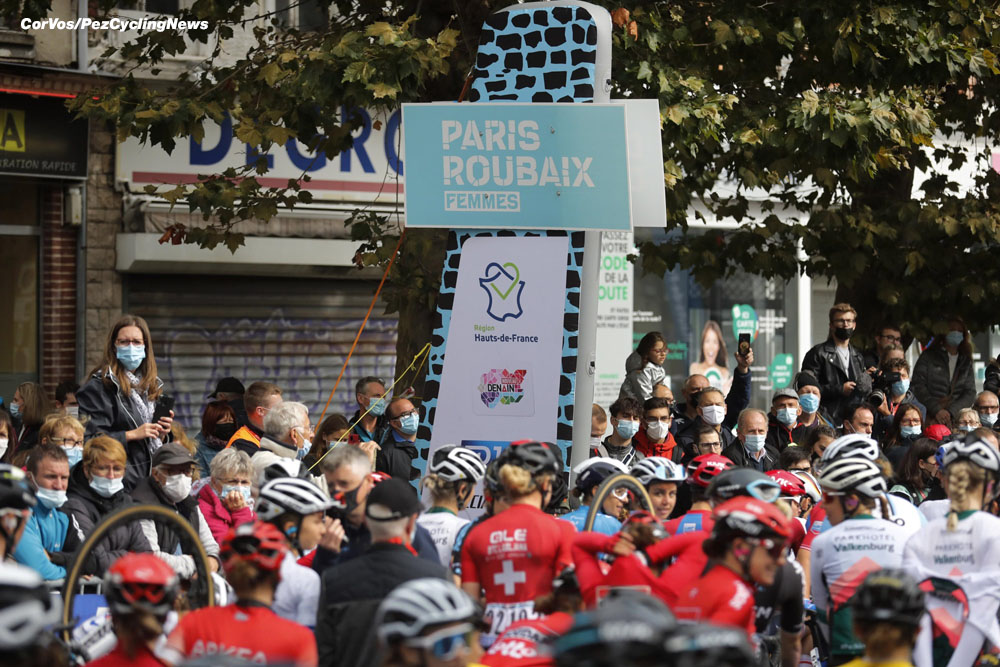 On Saturday 2 October, the first edition of Paris-Roubaix for women was on the menu. A race of 115.6 kilometers to the velodrome in Roubaix, with 29.2 kilometres of cobbles. 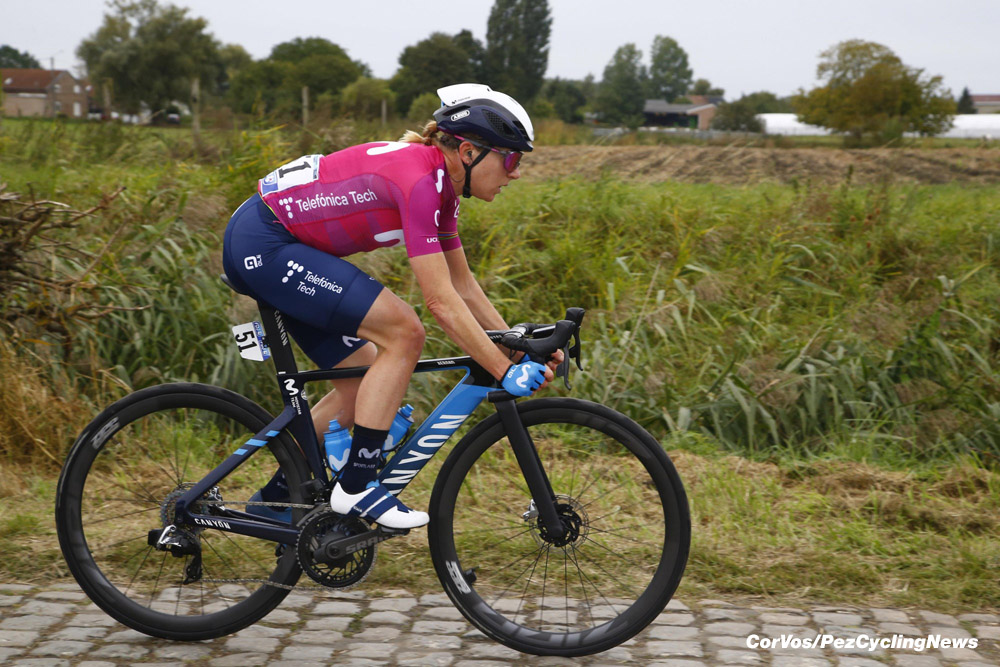 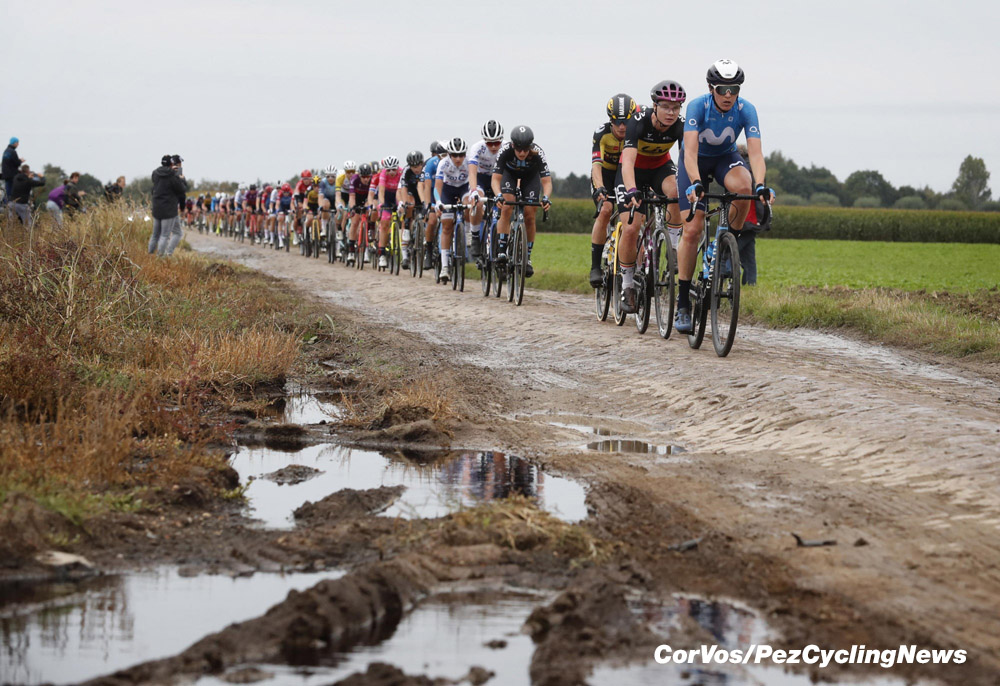 The first real attack turned out to be the winning one. On the first cobbled section, with 81 kilometres to go, Trek-Segafredo’s Elizabeth Deignan took off alone. No one took much interest in her solo attack, but because of the chaos behind her, she gradually extended her lead over the peloton. 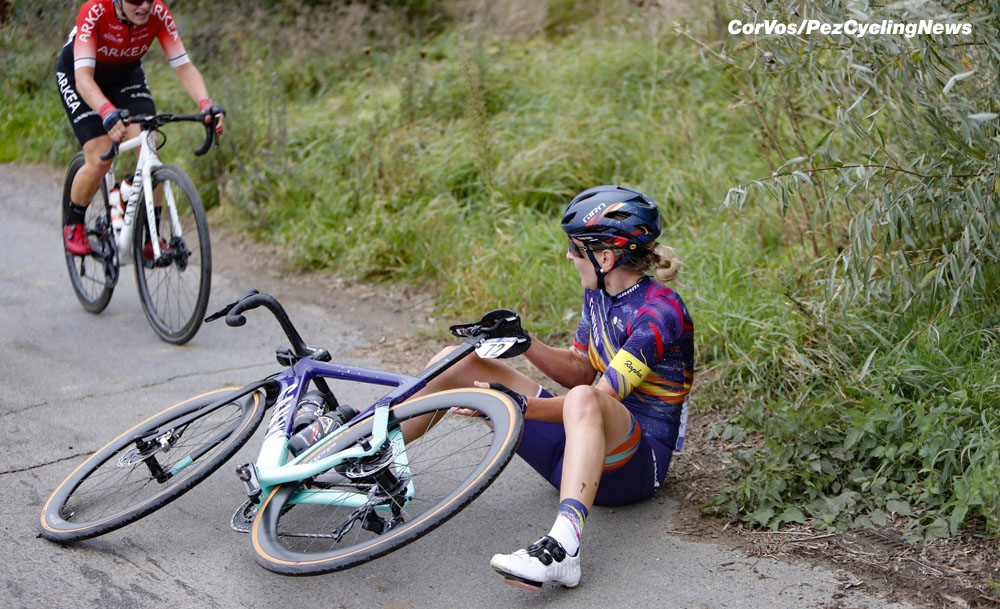 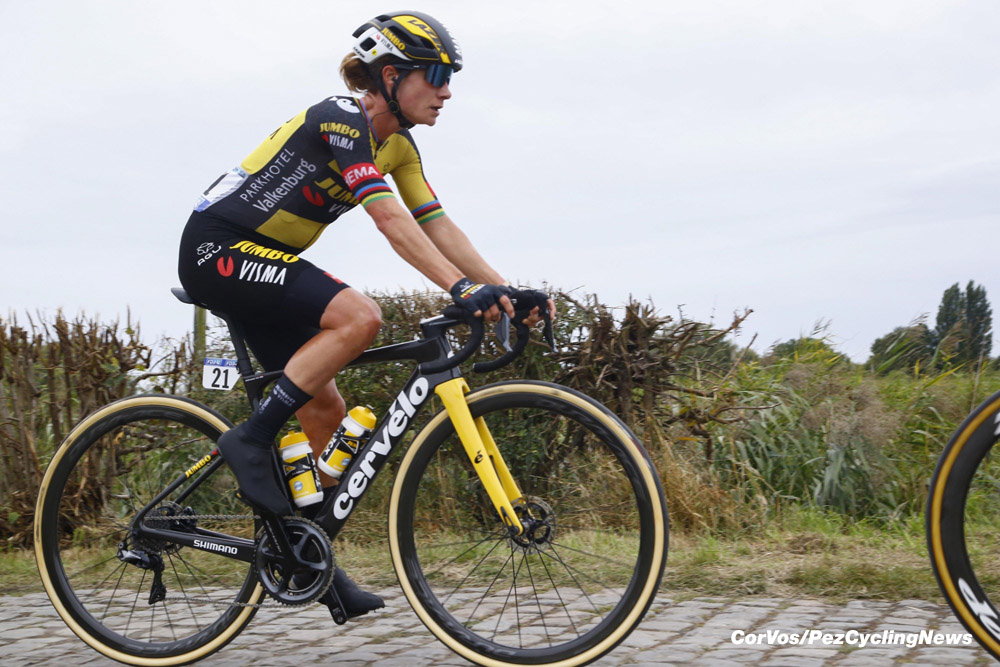 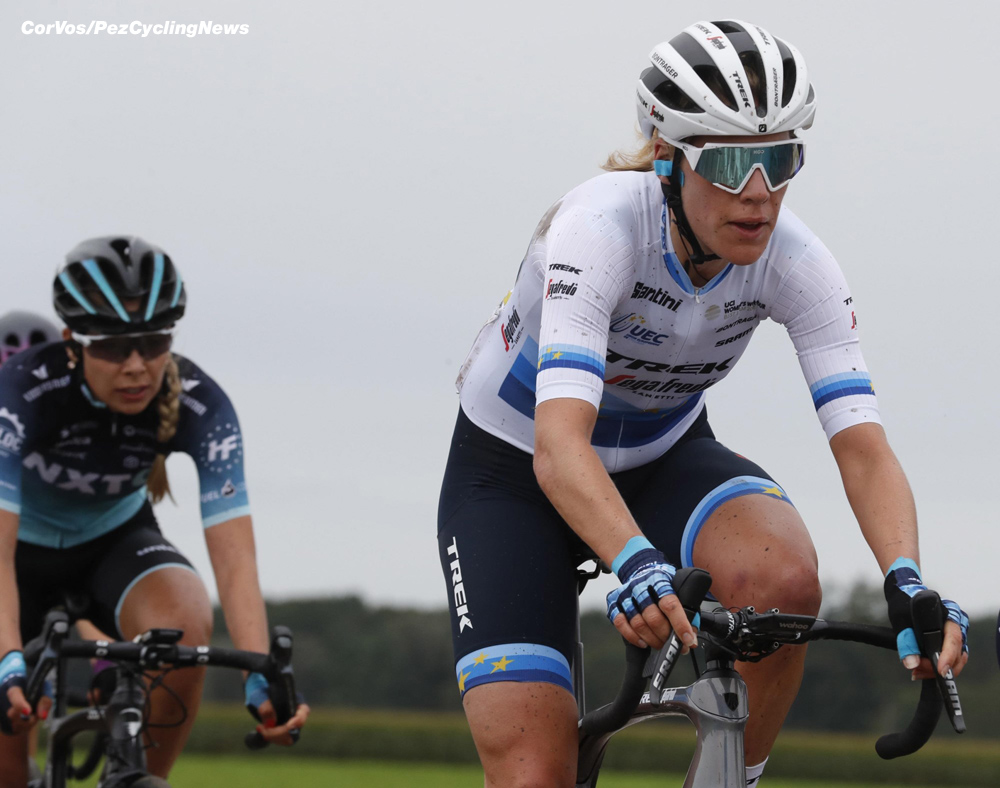 Marianne Vos and Elisa Longo Borghini split the peloton apart a number of times, but after each cobblestone section, riders managed to come back. A controlled pursuit could never get started. Many crashes also did not help to pull back the British rider. There was a crash in every section. World champion Elisa Balsamo hit the cobblestones, as did Lotte Kopecky and many others. 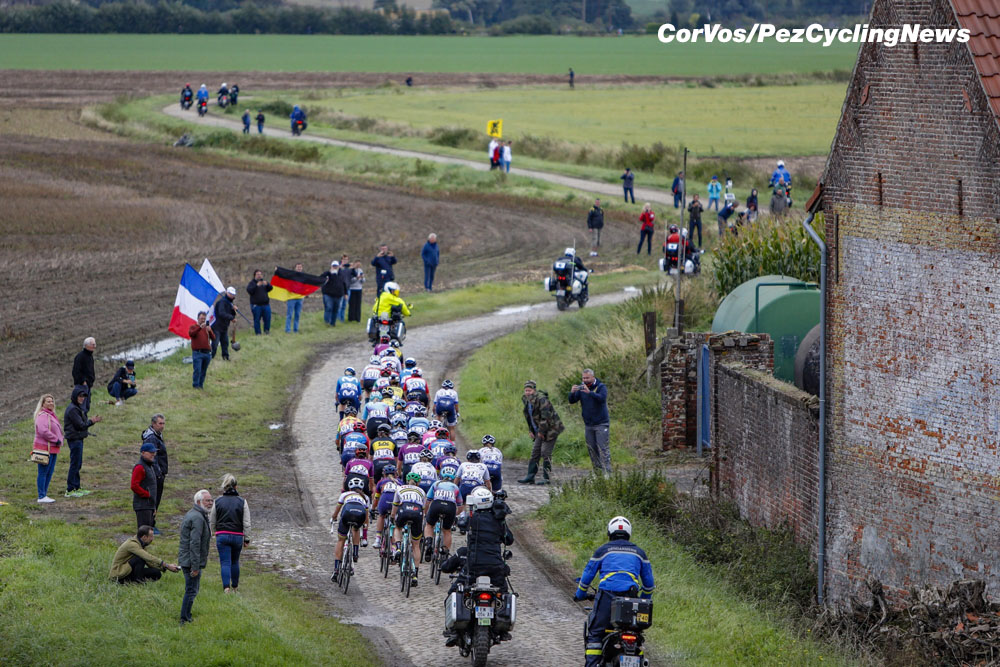 Not a big peloton by this point 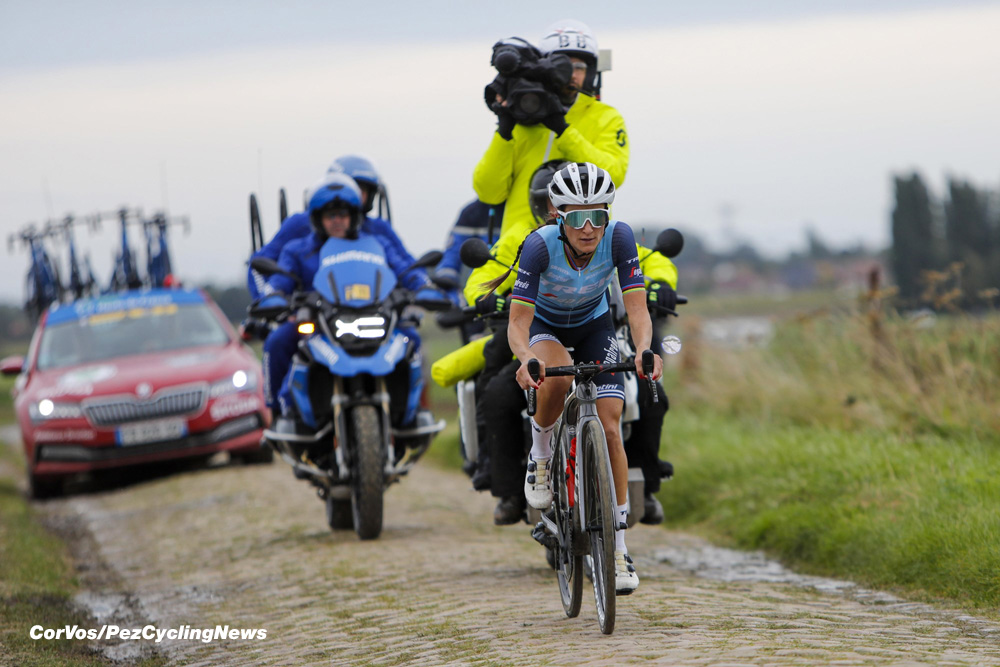 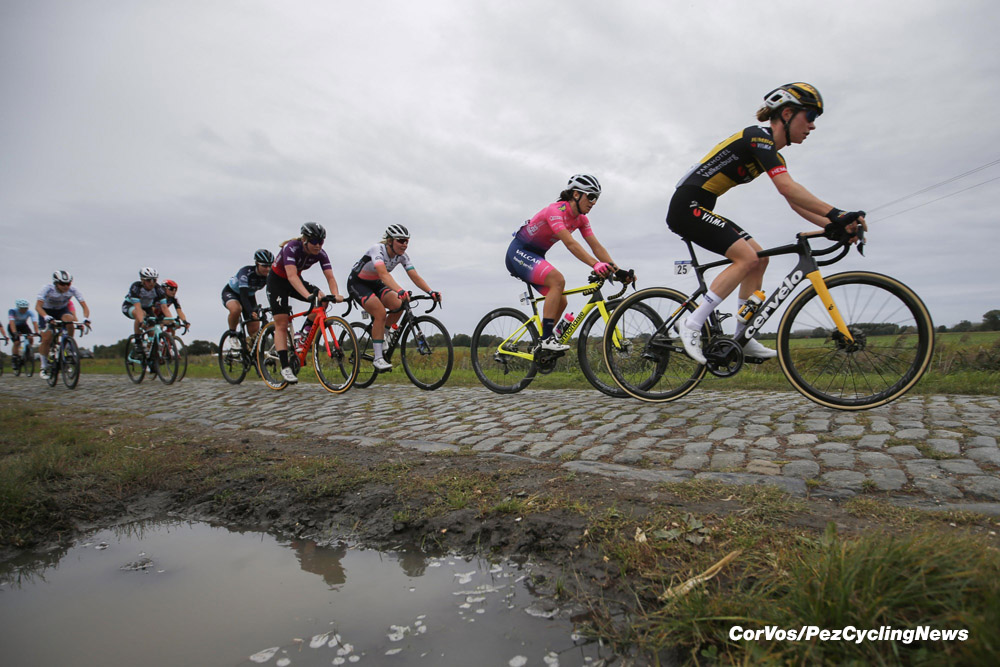 The chase was on behind

With 25 kilometres to go, a chase started. Jumbo-Visma, Movistar and SD Worx did some work for their leaders, reducing the lead from more than 2:30 to 2 minutes. The Champins-en-Pévèle and Carrefour de l’Arbre were yet to come. 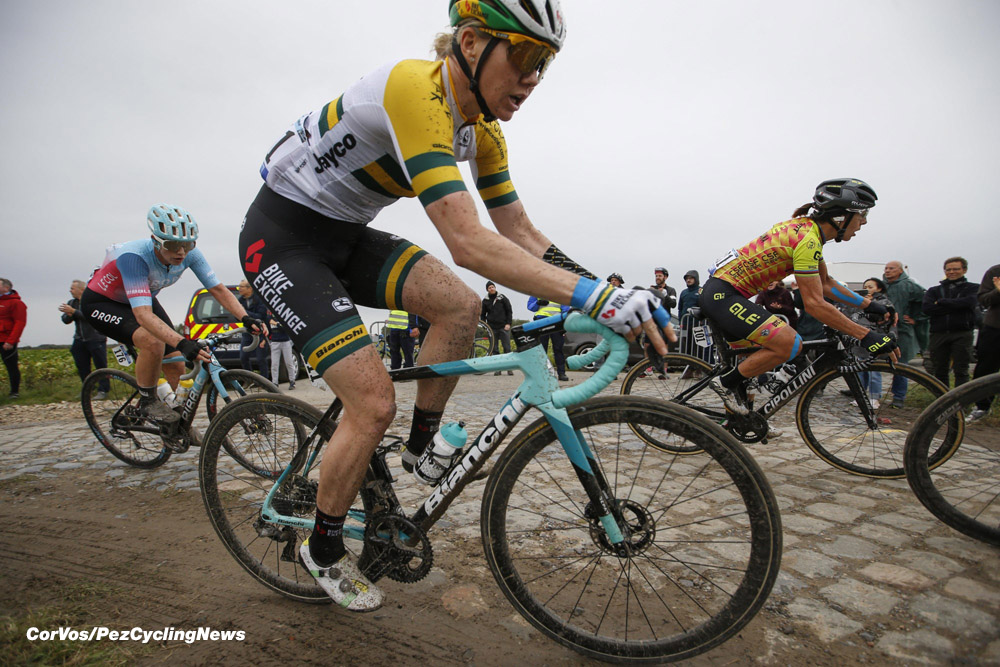 One of many to crash – Sarah Roy 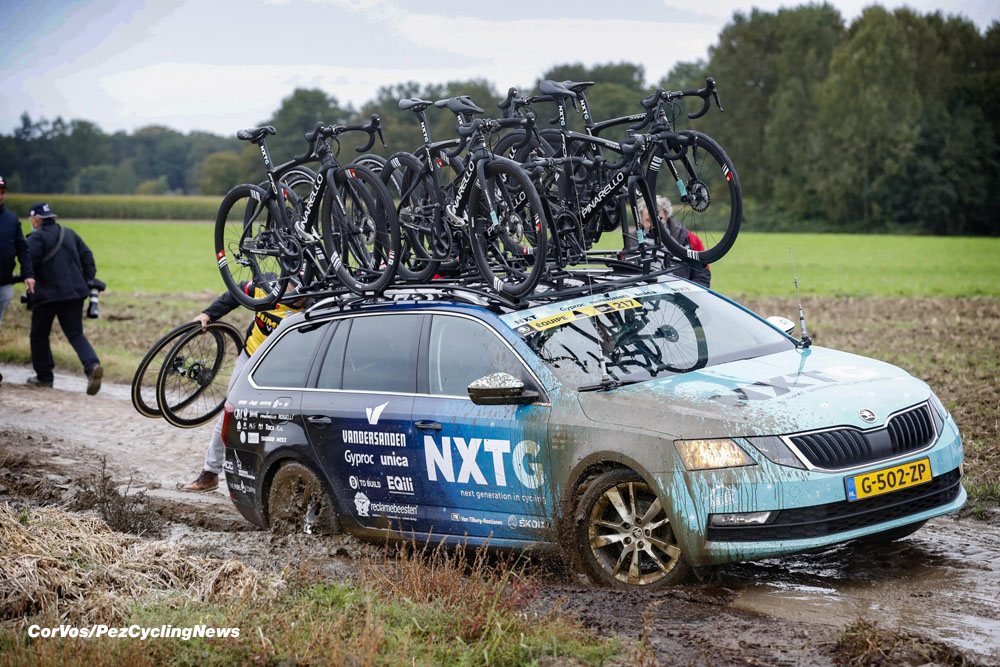 Hard day for everyone 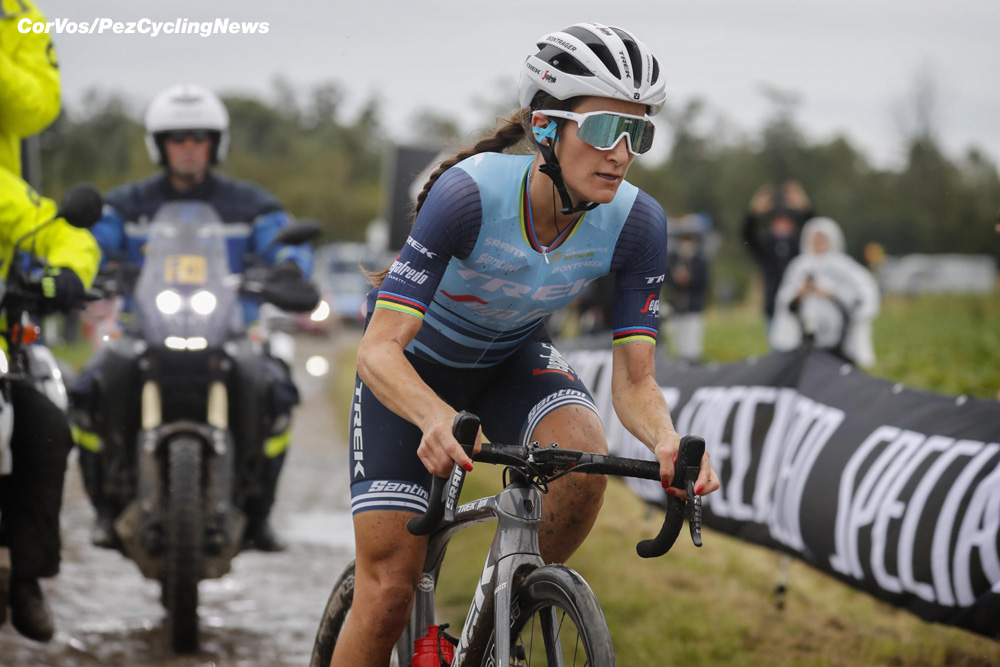 Deignan powered to the finish holding off Vos to the line

To still have a chance of winning, Vos attacked. No one was able to follow. Longo Borghini tried, but quickly cracked. The other riders were also unable to chase Vos, or were held up by a crash. Ellen van Dijk hit the ground hard and the World time trial champion took a number of riders with her. 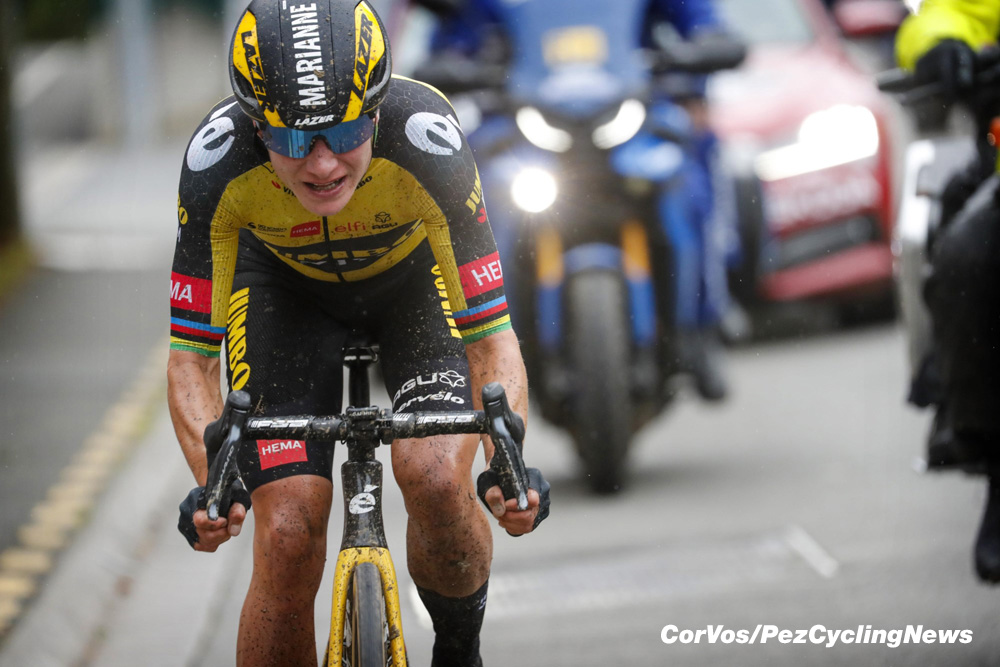 Vos chased, but it was too late 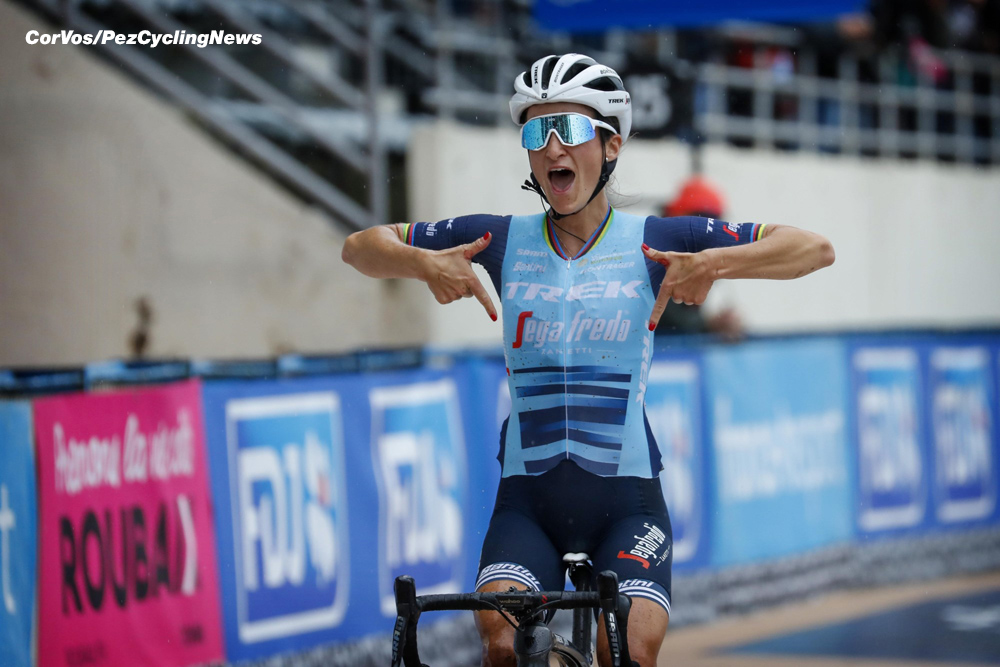 The first winner of the women’s Paris-Roubaix – Lizzie Deignan 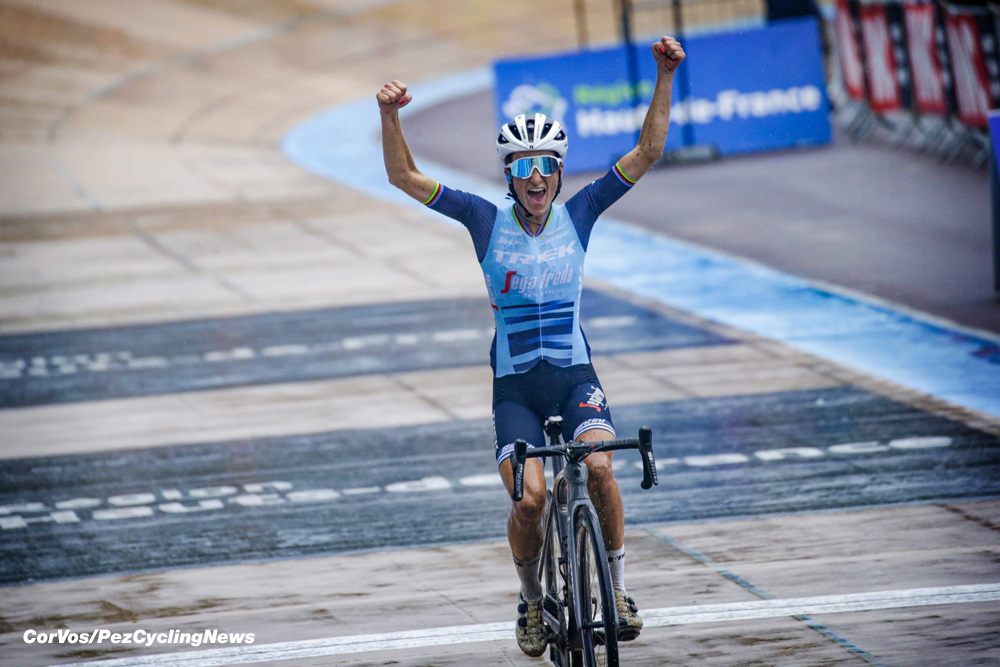 A solid win for Deignan

The podium was decided after these sections, because Vos was unable to close the gap to Deignan. With Deignan first, Vos second and Longo Borghini in third, they all arrived solo in the mythical velodrome in Roubaix. 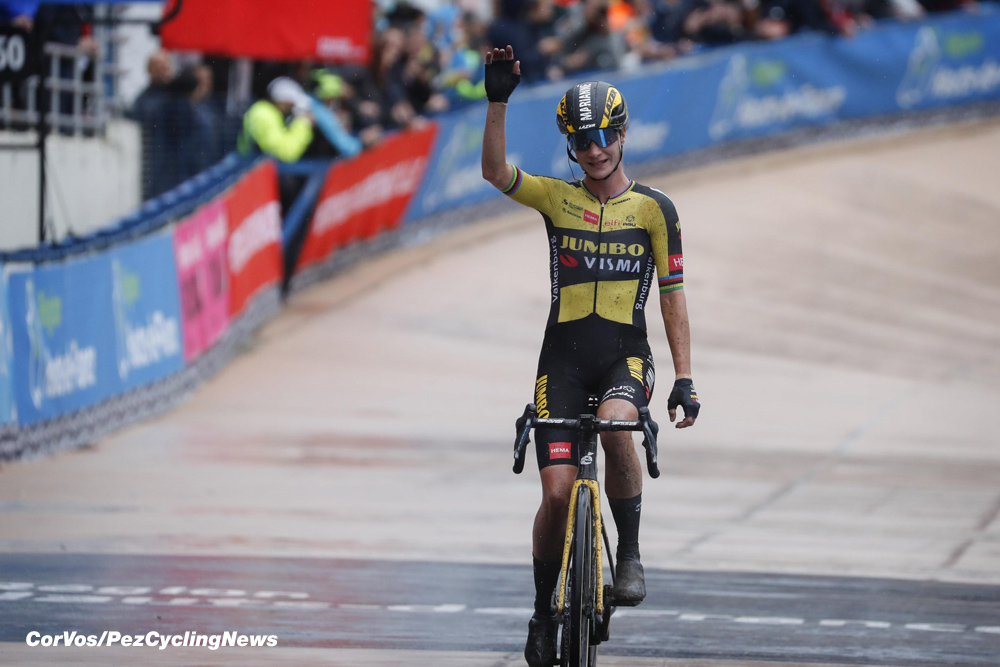 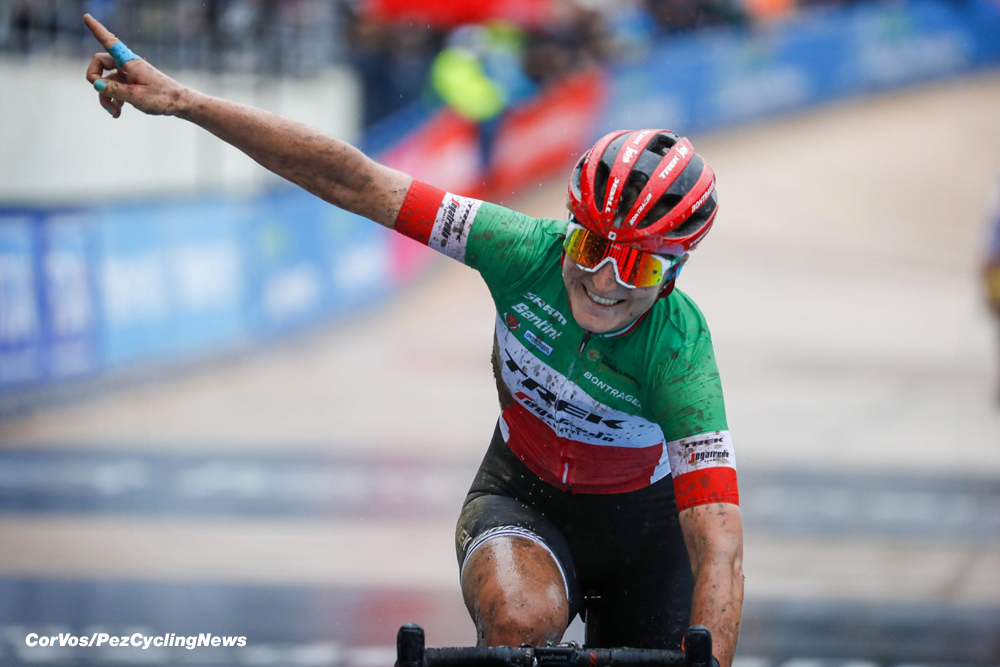 Paris-Roubaix winner, Elizabeth Deignan (Trek-Segafredo): “I’m very, very emotional. I don’t really know what to say, but I’m so damn proud. I had to lead the way to protect the leading women. But when I looked back and saw that there was a gap, I kept riding. If I race from the front, the rest had to chase me. I’m just the first winner! I am making history and being part of a team that is making history. I am so incredibly happy.” 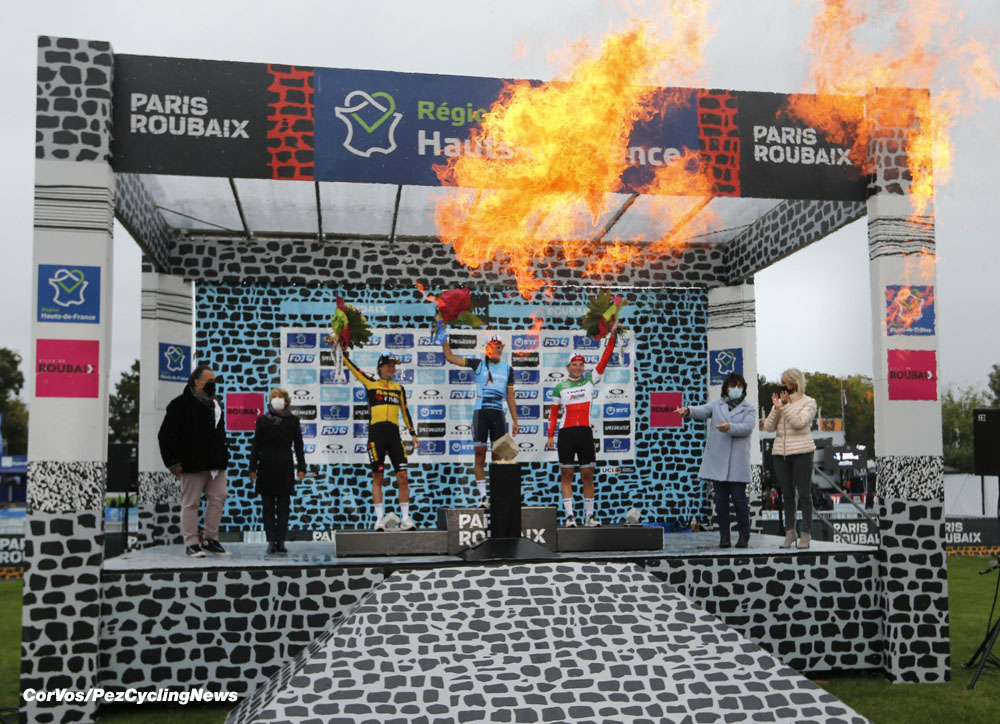