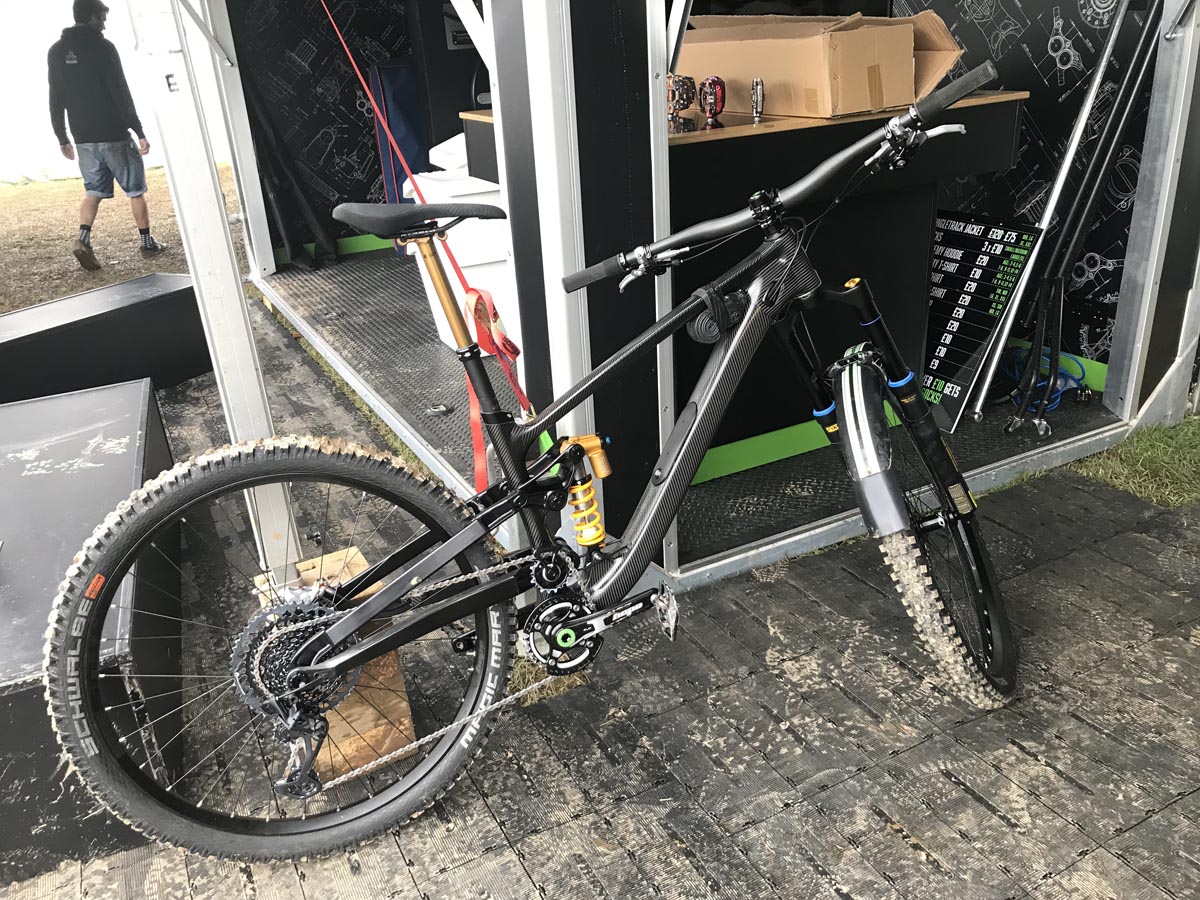 It’s time for the final EWS race of the season, and it just happens to be in Jessie-May’s backyard. After a six year break, the Vittoria Tweed Valley EWS is returning to Scotland’s network of epic trails around Innerleithen. That also means that Jessie-May didn’t have to look far to find some prototypes lurking around the pits. 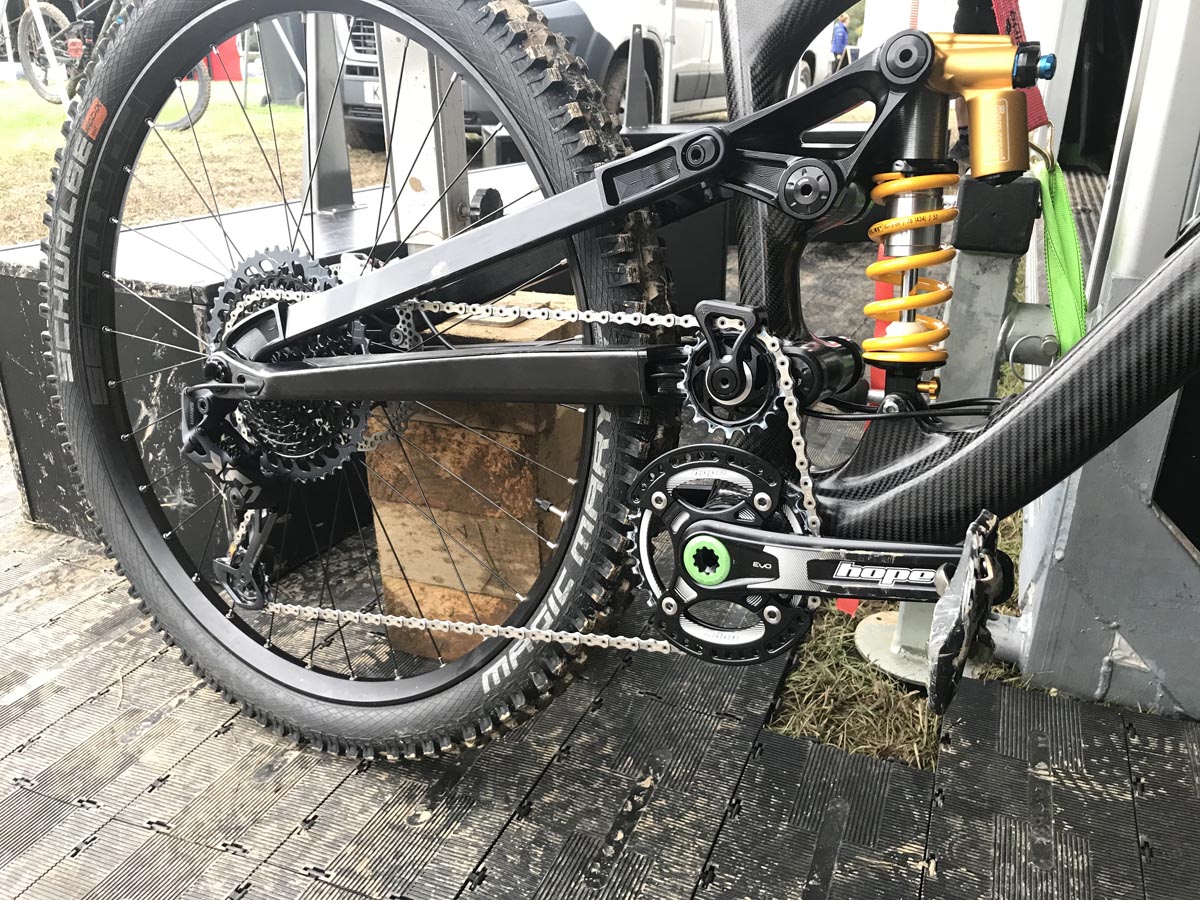 Hope is remaining tight lipped about this bike so far, but certain details are pretty obvious. After introducing their new Hb.130 in 2019, their longer travel HB.160 was dropped from the lineup. Could we be looking at the HB.160’s replacement? Based on the number of high pivot enduro bikes we’ve seen lately, it seems likely. While the current HB.130 uses a Horst Link style rear suspension linkage, this one looks to use a concentric pivot around the axle similar to the dw-link Split Pivot or Trek ABP. 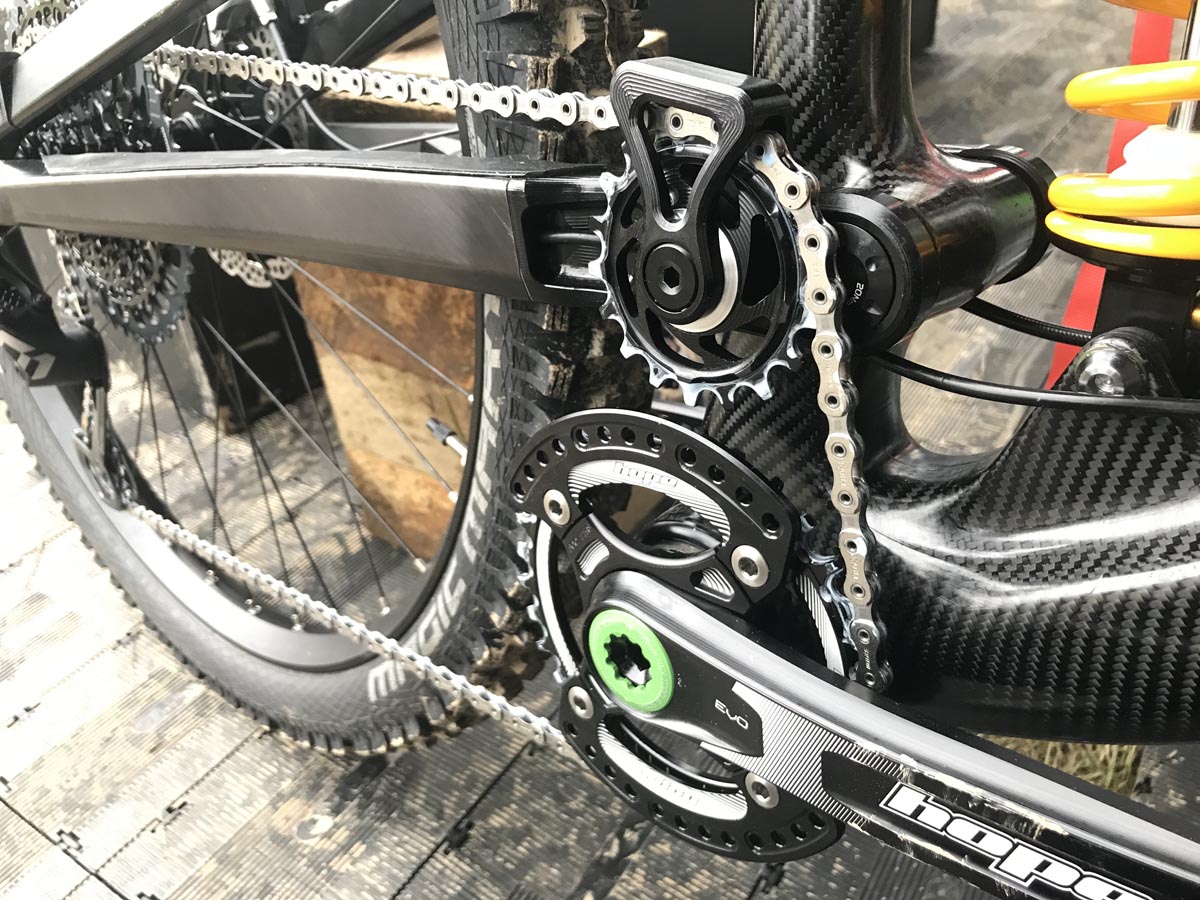 From the looks of it, it seems to follow the HB formula of a meticulously crafted carbon front end paired with a CNC machined aluminum rear end that’s bonded together at key joints. Only, this time there is an idler pulley mounted to the raised chainstay with its own CNC machined chain guide (of course). It also looks like there’s a flip chip at the upper seat stay pivot—perhaps to modify geometry or allow for mullet 27.5/29″ and 29/29″ wheel set ups? 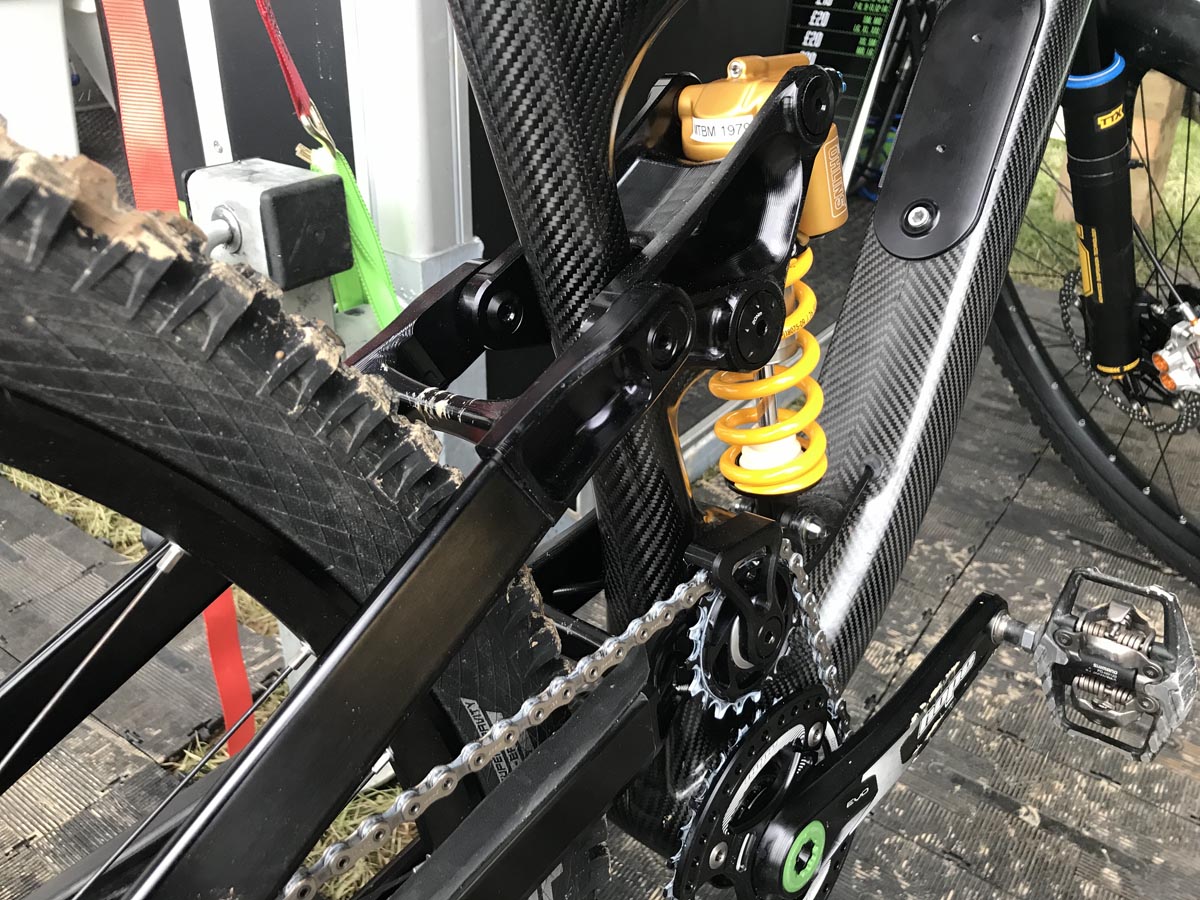 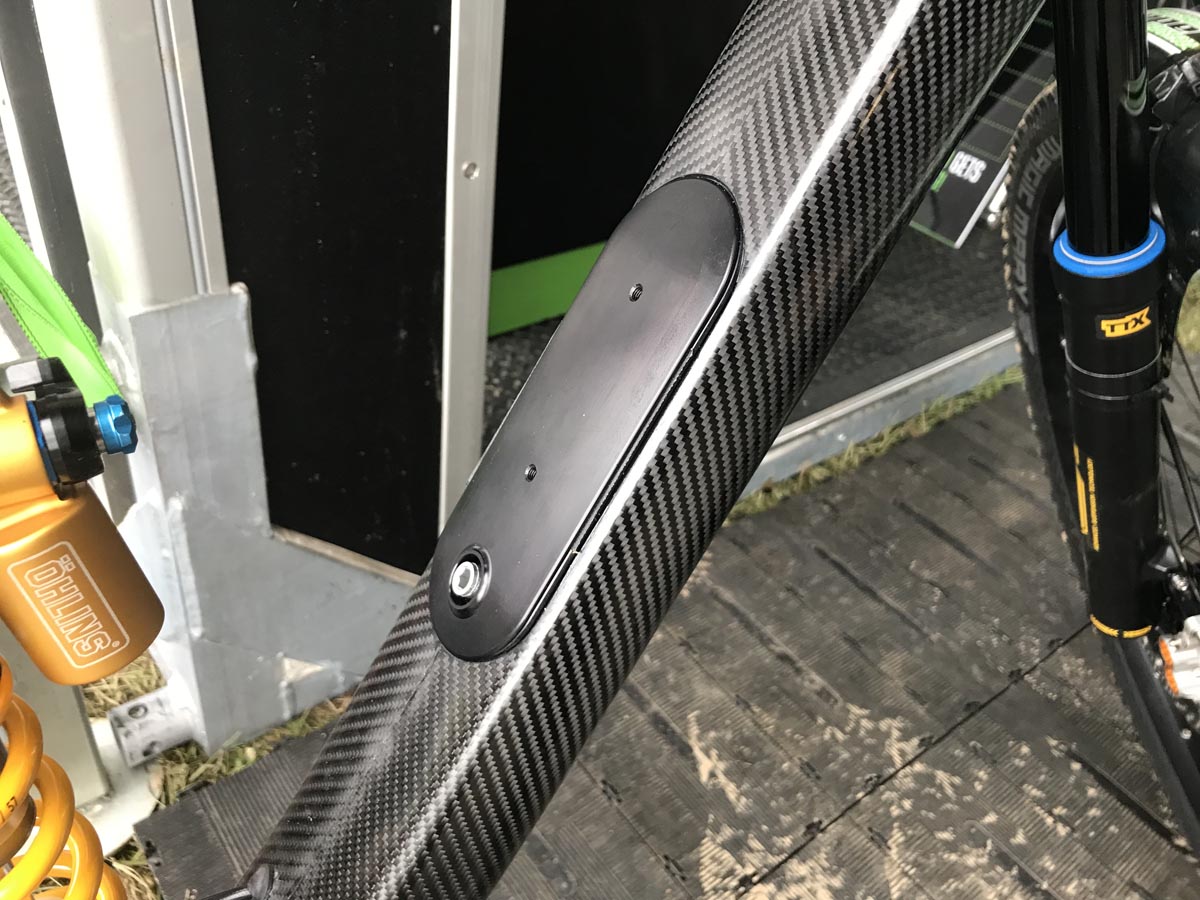 Ahead of the Ohlins coil shock, there is a plate that looks like it could be used for internal downtube storage. It looks like there are two threaded holes for a traditional water bottle mount, but there is also a larger bolt at the bottom which could be used to remove the entire plate.

This could just be an employee’s test rig, though it does look pretty polished for a prototype. Perhaps a new bike is imminent? 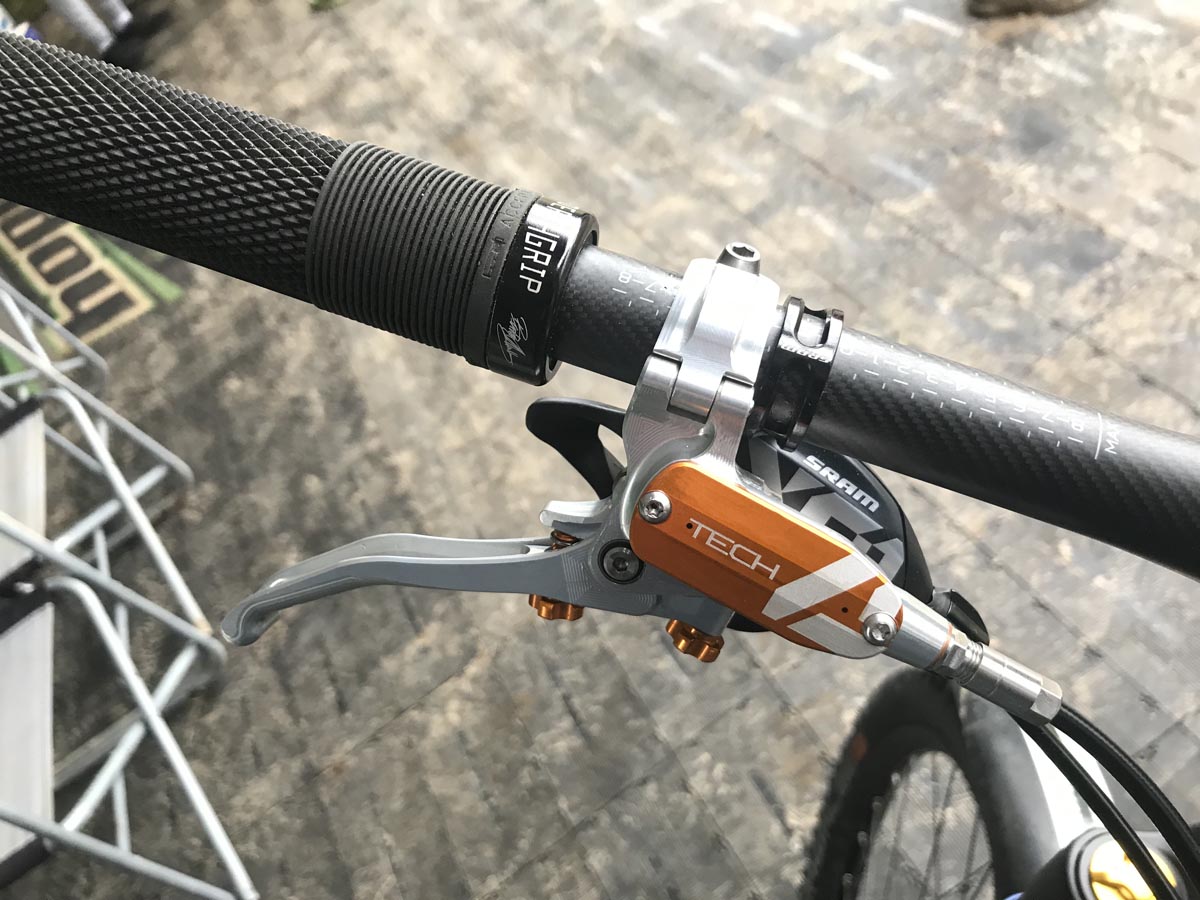 Elsewhere in the Hope pit, Jessie-May caught sight of what looks to be a new Tech 4 brake lever. It was paired with the same Tech 3 calipers, and as usual is fully machined in house. 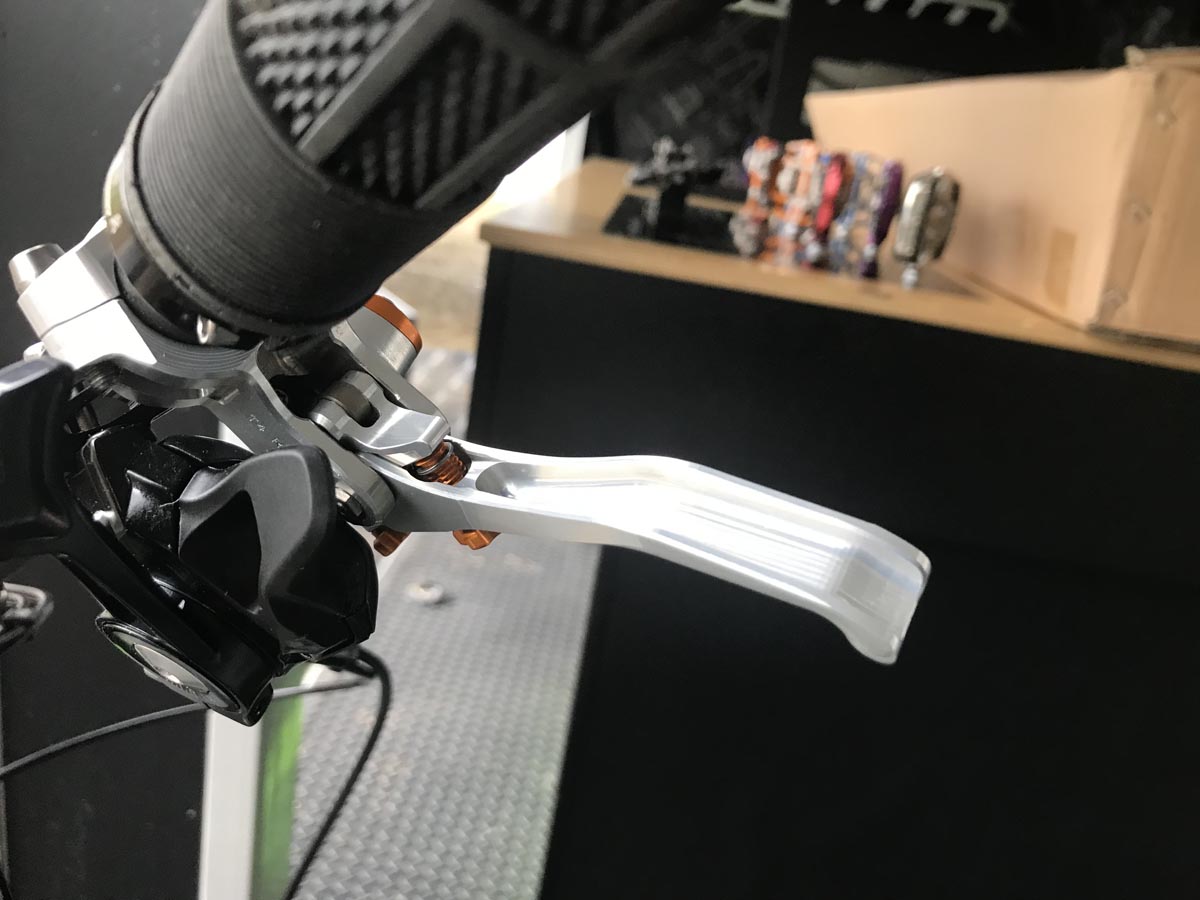 The lever itself is longer, and runs on a bearing instead of a bushing—all of which points to a brake that may require less hand strength to operate. It also features tool-free throw and reach adjust.

More when we have it.