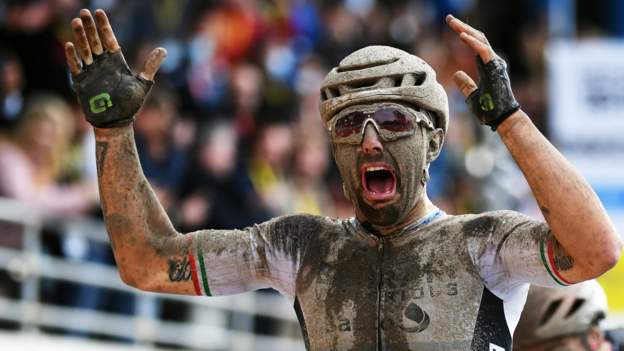 Colbrelli, 31, caked in mud after the 258km race, held his bike aloft after crossing the line then collapsed in tears and rolled around on the grass.

“I can’t believe it – my first Paris-Roubaix and this happens,” the Team Bahrain rider said.

“I’m very happy because it was a legendary Paris-Roubaix with the rain. In the finale, I did a super sprint. The Lotto-Soudal rider [Vermeersch] surprised me but I jumped I think in the last 25m.

“That was close! In my dream races, Tour of Flanders is first and Paris-Roubaix is second. This is my year. I’m very happy.”

His Italian compatriot Gianni Moscon, who finished fourth, had the lead until a puncture and fall from his bike saw him caught with 16km to go.

“It was spectacular,” Moscon told Eurosport. “Another Italian won.”

“Our nation can be happy anyway. I gave everything. A little bit of bad luck with the puncture and then I was on the limit, and when you are on the limit you make mistakes. I crashed and when they came from behind I didn’t have the legs.”

The win extended debutant Colbrelli’s incredible year after victory in the Benelux Tour, green jerseys at both the Tour of Romandie and the Dauphine, and success at the European Road Championships.

The one-day race, nicknamed ‘Hell of the North’, runs over cobbles and rough terrain and was being held for the first time since 2019 due to the Covid-19 pandemic.