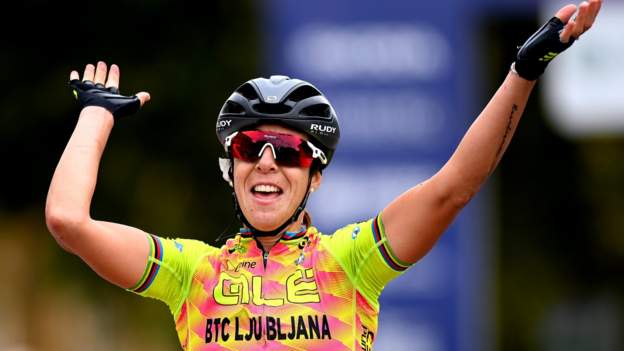 A large group of riders approached the finish line in a pack and 2007 road race world champion Bastianelli of Ale BTC Ljubljana edged ahead for victory.

Defending champion Lizzie Deignan was 26 seconds behind the leaders.

Barnes, Nelson and Lowden – who broke cycling’s prestigious hour record on Thursday – were three of eight British riders to finish in the leading group.

Deignan is the only rider to have won the Women’s Tour twice and the 32-year-old arrived in Oxfordshire after victory in the gruelling Paris-Roubaix race on Saturday.

“It’s a very nice win for me,” Bastianelli said of her first Women’s Tour stage victory. “The sprint was not easy because it is a little bit tougher and uphill, and I think it is not for the sprinters, but for me it is a good race and a good day.”

Nina Kessler took the sprints jersey, while Demi Vollering has the Queen of the Mountains jersey.

Tuesday’s stage will take place in Walsall and cover 102.2km.