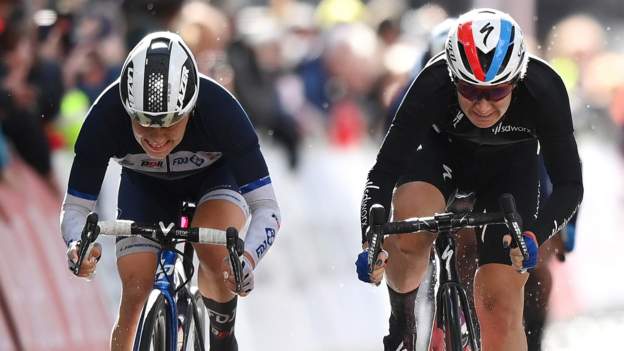 British rider Pfeiffer Georgi, 21, led at the final turn but was overtaken in a sprint finish and came fifth in Walsall.

“It was a hectic final,” said Pieters, who has previously won three Women’s Tour stages.

“It was an urgent sprint but it went well at the end.”

Georgi is the highest-placed Brit in the overall standings in eighth, 10 seconds behind Frenchwoman Copponi.

Lowden is 25th overall and 52 seconds behind Copponi after the first two stages, with two-time winner Lizzie Deignan down in 45th and one minute and 18 seconds behind after her Paris-Roubaix triumph on Saturday.

Movistar Team’s Sheyla Gutierrez is third overall after finishing on the podium for the second time in a row as the riders completed 10 laps of a 10km circuit on day two.

Overnight leader Marta Bastianelli finished with the peloton 46 seconds behind the leaders and has slipped to 10th.

As well as the leader’s blue jersey, Copponi took the points jersey from Bastianelli, while Elisa Chabbey holds the queen of the mountains jersey and Nina Kessler retains the sprint jersey.