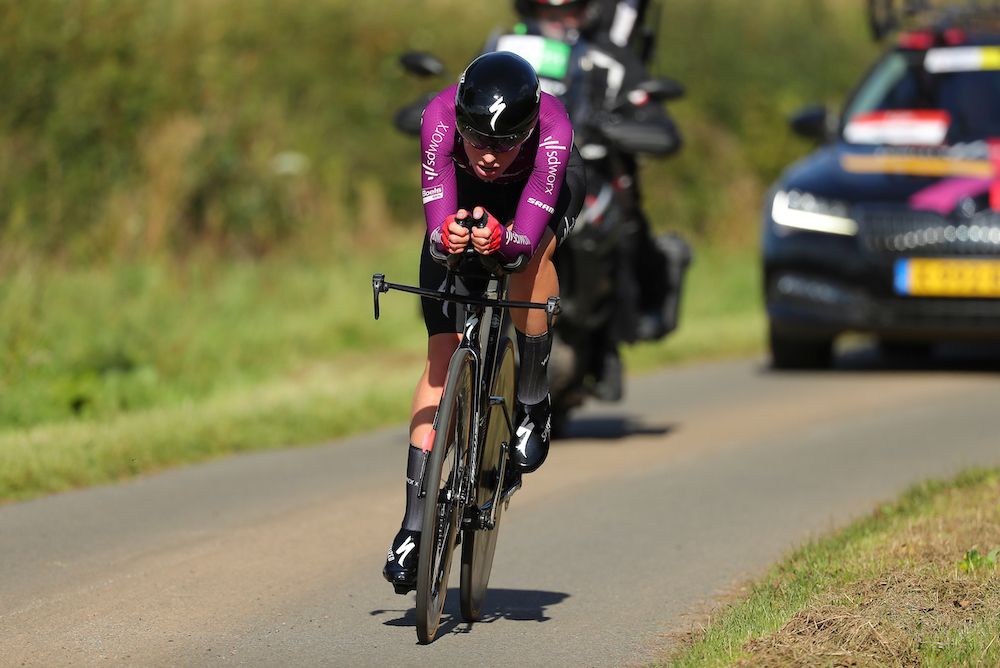 Vollering’s performance propelled her from fourth overall into the leader’s jersey, and she will start Thursday’s fourth stage with an advantage of 1-09 on DSM’s French rider, Juliette Labous.

Of the other British riders, there were notable performances from national champion Alice Barnes (Canyon-SRAM), Abi Smith (Tibco-Silicon Valley Bank), Anna Shackley (SDWorx) and Hannah Barnes (Canyon-SRAM) all of whom finished in the top ten within 24 seconds of Lowden.

With three stages remaining Lowden and Alice Barnes both sit in the top 10 on general classification, sixth and eighth respectively, with Pfeiffer Georgi (DSM), who finished Wednesday’s time trial 17th, in 10th overall.

For the first time since the race’s inception in 2014, organisers Sweetspot included a time trial, and in keeping with British testing tradition they kept the distance to around 10-miles, or 16.6km.

Starting and finishing in the Warwickshire town of Atherstone, which has hosted the race on a number of previous occasions, the route would be described as sporting. Starting with a three kilometre draggy uphill section before flattening out slightly and heading back to town on a fast descent with a technical final couple of kilometres. Add in string winds and day was not an easy one.

Seventh down the ramp Alice Towers (Drops-Le Col) set the first notable intermediate time of 14-24, though BikeExchange’s Teniel Campbell soon bettered that with 14-12.

Australian Jess Allen (BikeExchange) had been first down the ramp, and clocked 27.52 for the 16.6km course, but Towers proved her class with a time of 25.59, taking an early lead. However, the times tumbled, with a number of riders setting best times, Tibco-Silicon Valley Bank’s Veronica Ewers setting 24-39, to set a comfortable lead which stood for a while.

Moving into second place behind the American, SDWorx’s Scottish rider, Anna Shackley clocked 24-43, but she was soon usurped by national champion, Alice Barnes (Canyon-SRAM) who took the lead with 24-26.

However, it was Joss Lowden the home fans were waiting for. The newly crowned hour record holder set what was then the fastest intermediate time and rode into Atherstone Market Square to cheers, with a new fastest time of 24-22.

But the day was Vollering’s, the Dutch in pole position to take the first stage victory of her career.

With the time trial behind them the race transfers form the Midlands to the Essex coast for a 117.8km stage around the coastal flatlands, including a loop around the notoriously windy Dengie Marshes. With Dutch squad SDWorx now in form control of the general classification they may seek to consolidate their lead should the weather allow.