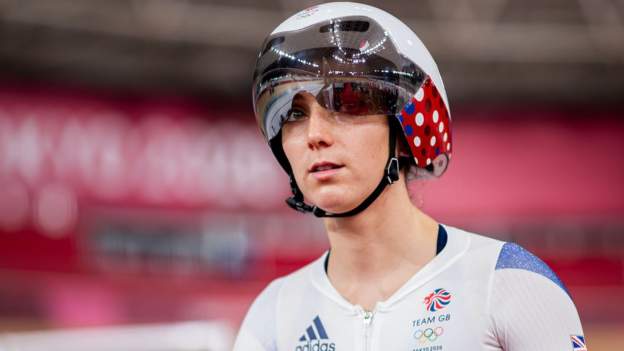 Last updated on 1 hour ago1 hour ago.From the section Cycling

Elinor Barker looks to the ceiling with the biggest smile when asked how she felt watching Lizzie Deignan win Paris-Roubaix. “That was incredible,” she says.

Incredible, yes, for Deignan, and for women’s cycling and women’s sport in general. For Barker, that victory took on a whole new meaning.

On Tuesday, the two-time Olympic medallist announced she was pregnant – three days after Deignan, herself a mother, became the first winner of the women’s edition of the historic race.

“I really felt like that race was happening just for me,” 27-year-old Barker tells BBC Sport.

“As horribly arrogant as that is, I had been having a bit of a wobbly morning and wondering: ‘Is this the right thing? Is this going to be possible? Is it going to be too hard?’ To come back from a particularly slow training ride and watch that was just phenomenal.

“It gave me such motivation and reassurance that I’m on the right path.

“It really is a confidence boost. I’m not saying that because I’m having a baby that I’m going to win Paris-Roubaix, but now I know that the ceiling is very, very high on what can be achieved after pregnancy.”

‘No-one packs a pregnancy test for the Olympics’

Barker, whose due date is towards the end of March 2022, was at the Tokyo Olympics when she thought she might be pregnant. Her period was late, which she considered might be a side-effect of her Covid-19 vaccination.

She sought the advice of the team doctor and psychologist, but, given the strict Covid-19 restrictions in Japan, there was no feasibility of her getting a pregnancy test before she competed in the team pursuit.

“It’s not the kind of thing that anyone has packed to take to the Olympics,” she says.

Instead, a decision was made to help Barker get it “completely get it out of her head” to allow her to fully focus on her race – and they did a good job.

“I did feel really focused when that time came, so much so that I almost completely forgot that we had arranged for a test to arrive in the village that I could take straight after racing,” she says.

“When we got off the bus, all of my team-mates went for dinner, and I snuck off to a room that the doctor had made sure would be private for me, took my test and found out that it was positive.”

Barker didn’t feature in the team pursuit final but still took home a silver medal, having won gold five years earlier in Rio. She flew home fewer than 48 hours later, to be reunited with her partner, Casper, and tell her parents the happy news.

“On the flight, I felt like I was 15 years old going to tell my parents I was having a baby, it felt really quite nerve-wracking considering I was 26 and in a lovely, committed relationship, and a capable adult.”

For Barker, a five-time world champion on the track, her pregnancy is even more special given her 2018 diagnosis of endometriosis – a condition affecting one in 10 women where tissue similar to the lining of the womb grows elsewhere inside the body. She was told it could be difficult for her to have children.

“There was never a doubt in my mind that this felt like the right thing,” she says. “Casper and I had tried to plan for it, we had talked about a timeline of when we might start trying, with an idea that it might be far earlier than when we wanted to have kids because it could take such a long time.

“So for it to just happen by chance, it feels bizarrely like some kind of fate, which is not something I’ve ever really believed in before.”

As for her return to the sport, Barker has an “A, B, C and D plan”. She signed a contract with her road team Uno-X the week she discovered she was pregnant, receiving “fantastic” reassurance that nothing would change from their perspective.

“The message that Jens [Haugland], the boss of the team, sent me… honestly I think it should be framed and put on walls in offices around the world as the example of how to respond if your employee, or future employee, tells you that they’re pregnant. It was so lovely, and so reassuring.”

But it perhaps wouldn’t have been the case just a few years ago, with maternity clauses only written into Women’s World Tour rider contracts in 2020. In her pregnancy announcement on Instagram, Barker thanked Deignan, Laura Kenny and Sarah Storey for paving the way for mothers in cycling.

“I really believe that if this had happened to me a handful of years earlier, I probably would have immediately thought ‘that is my cycling career over’, or it wouldn’t have been a choice to make,” she says. “Because of these women, I don’t have to make that choice now.

“As much as it really comforted me to know these women could achieve these things after having kids, I think the biggest thing for me is that it showed my road team and British Cycling that it’s an opportunity that should still be given to riders, and that it shouldn’t change anything.

“Pregnant women aren’t a risk in a sporting environment, it can be an asset. I feel so, so lucky to be in the situation I’m in now and it’s 100% down to those women.”