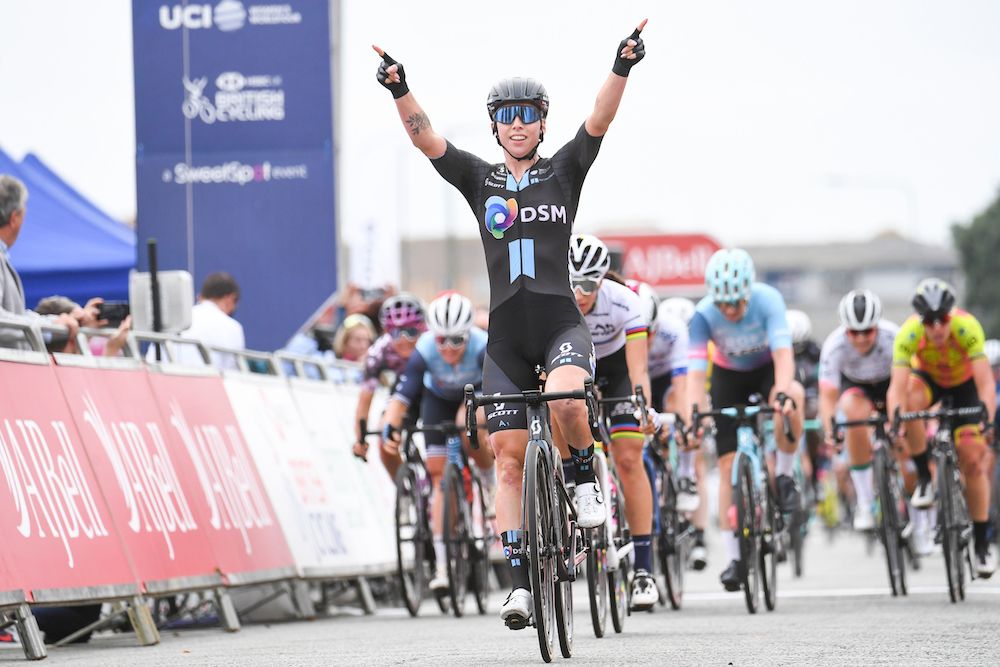 It was deja vu on stage five of the AJ Bell Women’s Tour on Friday, Lorena Wiebes taking a second consecutive stage win in Clacton.

Mirroring the previous stage, the Dutch rider lost her DSM team lead out in the final, but led round the final, wide bend opening her sprint immediately and taking a 12th win for the season.

On what was the flattest stage of the week, there were no dramas for overall leader Demi Vollering who maintained her substantial lead on general classification.

Britain’s Hayley Simmonds had the ride of the day, heading up the road early on and building a lead of 4-30, before being caught late in the stage.

Saturday’s sixth and final stage is the longest of the week and could prove a challenge, as though the route between Haverhill and Felixstowe travels on narrow winding roads, and though there is little in the way of climbing, it’s up and down for most of its 153km.

Like Thursday’s fourth stage, the penultimate day was held on the roads of South Essex, the peloton set to ride a 95.4km route starting in Colchester and finishing in Clacton. Indeed the seaside town saw the race twice, as it first dropped south to the coast though the line before tackling a large loop north to the River Stour coast and returning to the finish.

After a few jabs and parries at the front, former national time trial champion Hayley Simmonds (CAMS-Basso) made a move, quickly building a lead which settled for a while at 1-30. After remixing static for a while the peloton were clearly happy for the Cambridge based rider to have her lead, letting her advantage grow to two minutes.

As the race approached Clacton for the first pass of the finish another Brit, Connie Hayes (AWOL-O’Shea) attacked out of the bunch. However, though she was able to get a gap on the pack, who dropped to nearly four minutes back, she was unable to gain ground on Simmonds, who led her by 2-50.

Simmonds continued strongly, extending her advantage on Hayes and leading the bunch by 4-40 with 50km remaining. However, it was around here the lead began to come down, Hayes being caught with 40km to go, and Simmonds’s advantage dropping under four minutes.

By the time they dipped below 30km remaining the advantage was down to 2-20 and Simmonds’ fate was sealed. This was confirmed when three women launched in pursuit off the back of a small climb in Manningtree, the BikeExchange duo of Sarah Roy and Ane Santesteban joining queen of the mountains, Elise Chabbey (Canyon-SRAM) building a lead of 20 seconds on the bunch.

However, those three were soon caught by a peloton now set on a bunch kick and even Simmonds tenure at the front only lasted a few kilometres more and she was caught 16km out.

In the remaining kilometres a number of women tried launching attacks, but only Liv Racing’s Soraya Paladin gained any ground, the bunch catching her with more than five kilometres remaining, and setting the race for the sprint finish.