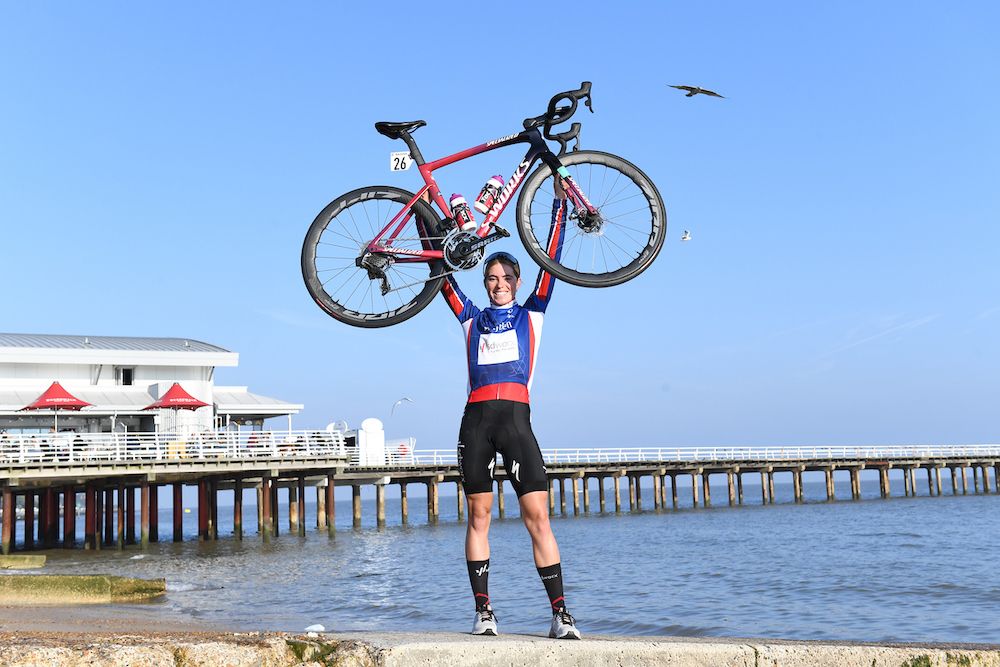 Elisa Balsamo took her first win as world champion in Felixstowe on Saturday, the Italian winning the final stage of the AJ Bell Women’s Tour. The 23-year-old benefited from an excellent lead-out in her last race with Valcar Travel and Service, surging clear in the final metres to win ahead of Lorena Wiebes (DSM) and Chloe Hosking (Trek-Segafredo).

The sprint finish concluded a dynamic day in the Suffolk lanes and safe in the Finishing in the bunch, Dutch rider Demi Vollering took the overall win with relative ease, her SDWorx team-mates keeping her safe and working with the sprinters’ squads to hold a five-woman break in range.

Her win was based on a stealer performance in the stage three time trial, form which she emerged with an overall lead of 1-09 ahead of Juliette Labous (DSM) in second and Clara Copponi (FDJ-Nouvelle Aquitaine Futuroscope, the top three remaining the same until the end of the race.

Having been with Valcar since 2017 who have built their team around an excellent sprint leadout, stage winner Balsamo will move to Trek-Segafredo next year, where she will learn from DS, Ina Yoko Teutenberg and Australian sprinter Chloe Hosking.

The final stage of the seventh edition of the AJ Bell Women’s Tour was the longest of the week, taking in a circuitous, winding route through the Suffolk countryside between Haverhill and Felixstowe.

SDWorx’s Demi Vollering started the day with a lead of 1-09 of on a cluster of nine riders all within 50 seconds, led by Juliette Labous (DSM) in second place and though it seemed unlikely anyone would be able to overthrow the Dutchwoman, they knew they needed to remain attentive.

As with some of the previous stages, despite some sporadic attacking, the peloton stayed together, at least until the first classified climb at Glemsford, after 31km, when one rider managed to get away.

However, her lead did not last long and she was back in the bunch before the intermediate sprint at Long Melford. Huge crowds greeted the race for the prime there, and soon after another duo of riders headed up the road, but once they had a lead of 20 seconds the bunch closed them down.

However, many teams were desperate to get away and the race would not calm. This period of aggression resulting in Slovenian champion Eugenia Bujak (Alé-BTC Ljubljana) getting away, with Ane Santesteban (BikeExchange) and British rider, Dani Christmas (Drops-Le Col) in pursuit.

While Bujak gained a led of 1-10 on the bunch, the chasing duo struggled to make contact, and it was only when they were caught by Tibco-Silicon Valley Bank’s Veronica Ewers that the gap closed.

As they reached Bujak at the front Sofia Bertizzolo (Liv Racing)was closing in from behind, with the peloton approaching two minutes in arrears. Finally, after a long chase the Italian rider caught the leaders and entering the final 75km we had five women’s with an advantage of 2-45 on the SDWorx led peloton.

Of the leading group Santesteban was the main threat to the general classification, starting the day in 27th place, 3-08 behind Vollering, whose SDWorx team sat on the front of the bunch, allowing the gap out to a maximum of a dangerous three minutes.

A closed level crossing at Claydon caused some consternation, with both groups caught by different trains, but luckily both breakaway and peloton were stopped for a virtually identical time, and the race continued.

As they skirted to the north of Ipswich SDWorx came to the front and put the hammer down, the gap beginning to come down dipping below one minute as they entered the final 25km, and they were finally caught 14km out.

As soon as they were back in the bunch others tried their luck as the race wound through the narrow lanes south of Woodbridge, every village road lined with spectators out in the warm autumn sun.

Despite this flurry of aggression, the race was set for a bunch, with only a serious crash at around 1500m from the line, upsetting preparations for the bunch kick.