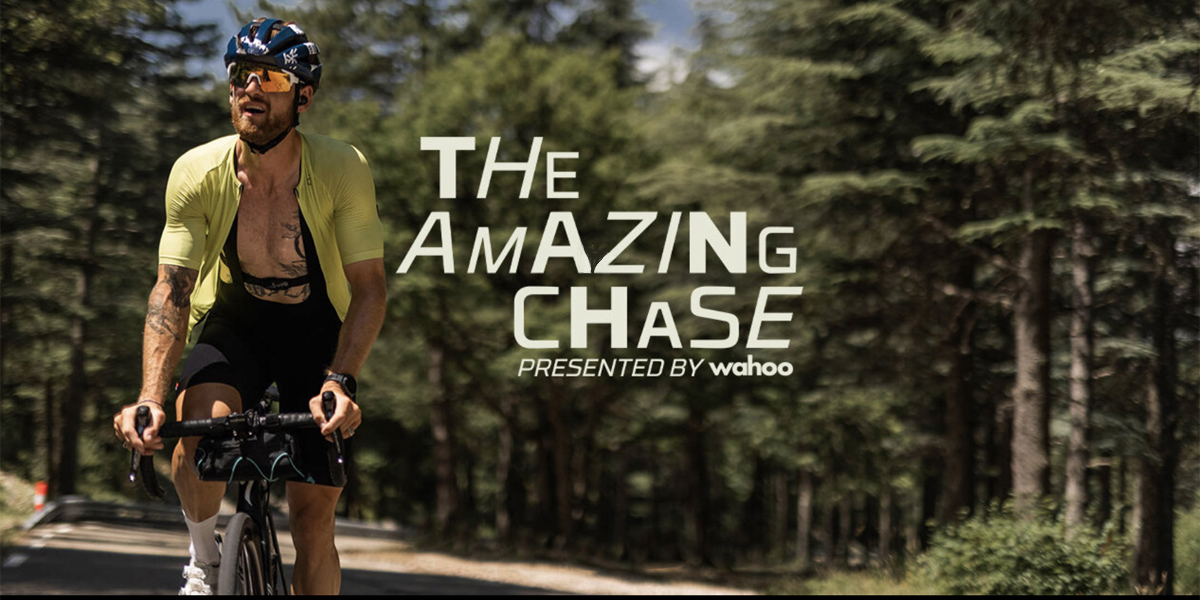 Jack Thompson, from Perth, Australia, and resident in Girona, Spain, grew up following the Tour de France on middle-of-the-night broadcasts in his homeland and dreaming of competing in the race himself. He came to realize that he was not fast enough for the pros but still the dream was there and in July he set out alone to win the 2021 Tour, sort of. It was to be “the Amazing Chase.” 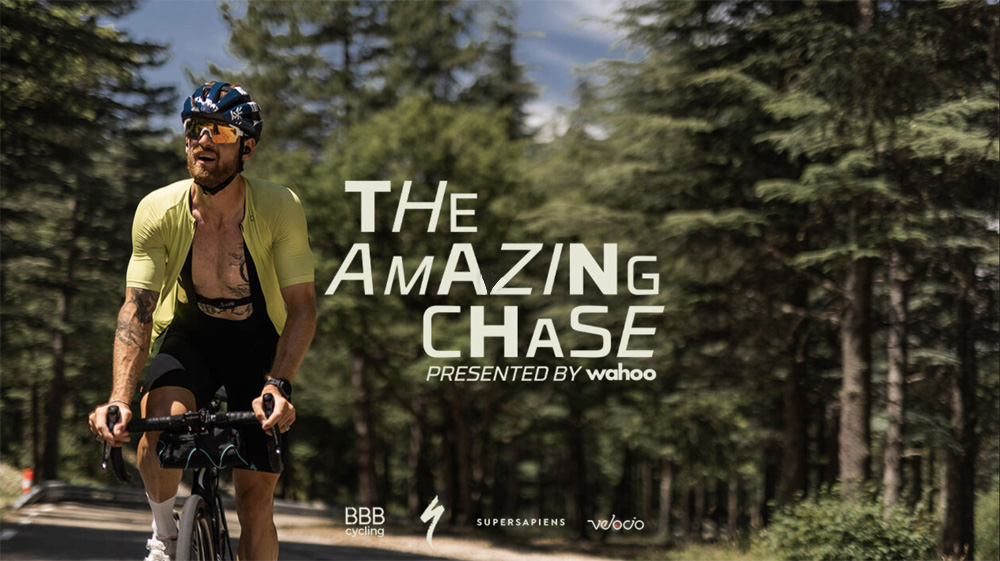 Maybe 2021 is a year when the Tour brought out the ultra challengers—many of us followed EF pro cyclist Lachlan Morton’s solo bikepacking version of the Tour (including riding all the transfer sections!) as he raised money for World Bicycle Relief—but Thompson’s version was to complete the same course the pros would ride but in half the time. This meant riding two stages per day, around 350 kms, and averaging 5,000m of climbing. He would ride what the pros rode, and do the transfers by vehicle, as they would. Clearly up for a challenge, he gave the pro peloton a 10 day head start. 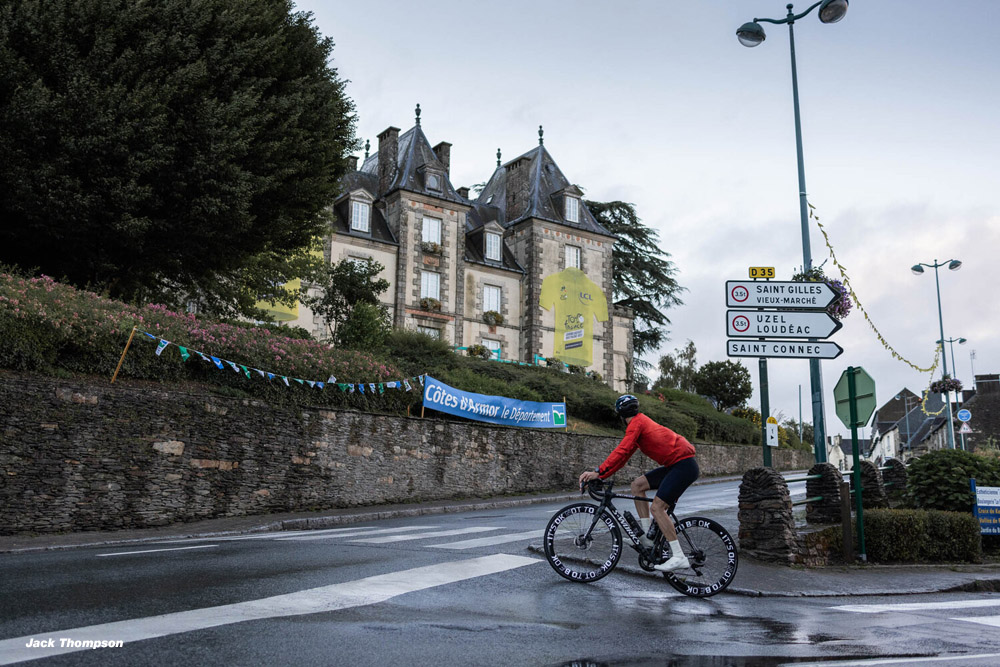 Jack Thompson has suffered from mental illness and drug abuse, a person who went through rehab and saw the darkness. He seems to have rediscovered himself with ultra cycling endurance events and his list of accomplishments is pretty staggering, from riding 50,000 kms in 2017 to holding the Guinness World Record for most distance cycling in one week (3,505 kms), accomplished in 2020. 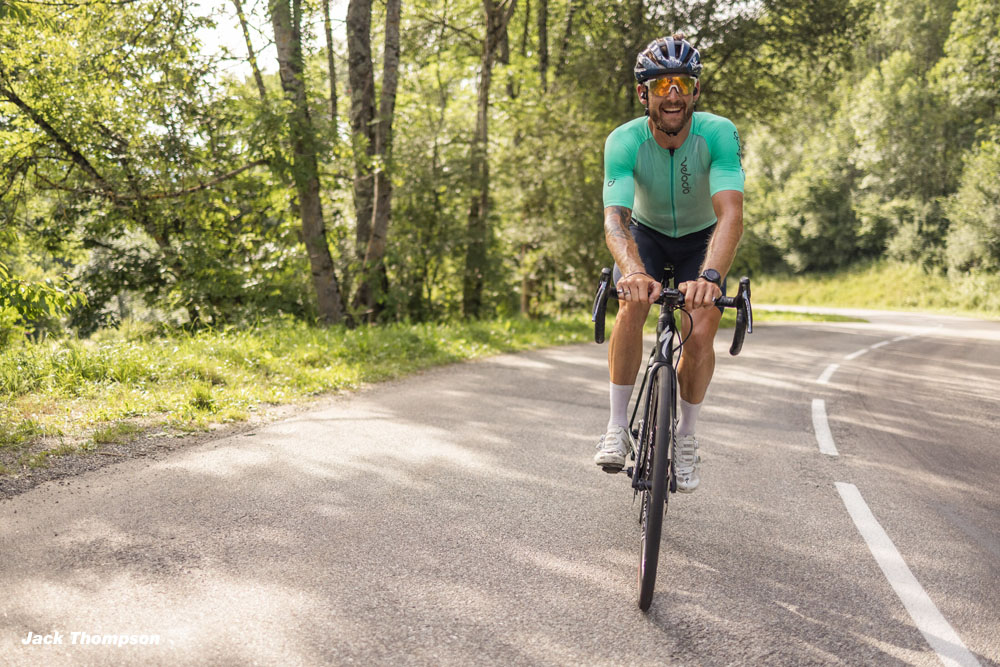 He first conceived of the idea of “the Amazing Chase” in 2018 and three years later he found himself in Brest, at the Tour’s start line (without the Tour), accompanied by a small camper van and four stalwart friends in support. His idea was to show the Tour from a different perspective, one that was a lot lonelier than the official race, with its mass of riders, support vehicles, fans and noise. 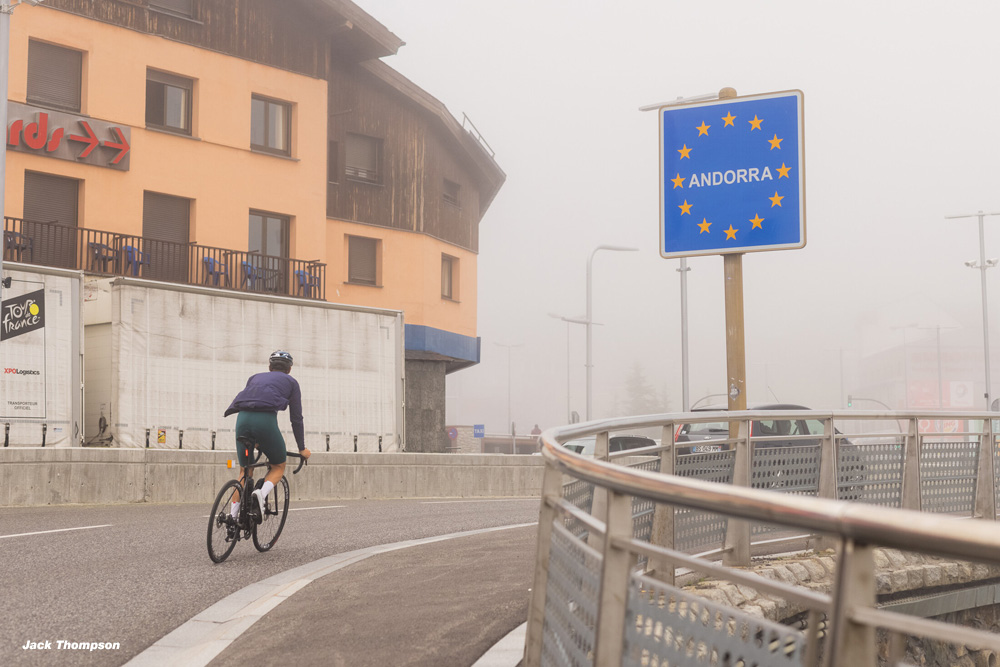 To ride more than 3,500 kms in only 10 days he would have to spend around 14 hours each day on the bike, and the car transfers would average another 3 hours daily. It was his chance to race the Tour and see how fast he could go through some of the most famed places in cycling’s history. 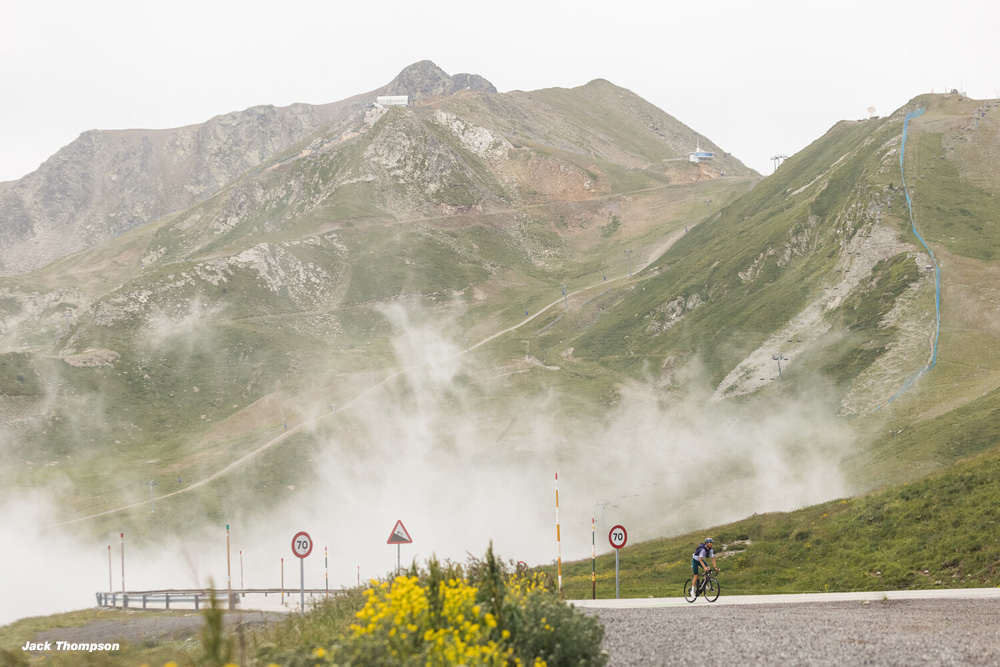 Of course, nothing always goes perfectly to plan. At the end of one stage the team discovered that the hotel they booked would not honour their reservation as a convention had come to town and there was nowhere else to stay, so, well, just get back on the bike and keep riding. Thompson also notes that while you can control your food and your equipment, you can’t control the weather. At one point he is back in the van, clearly gone hypothermic. 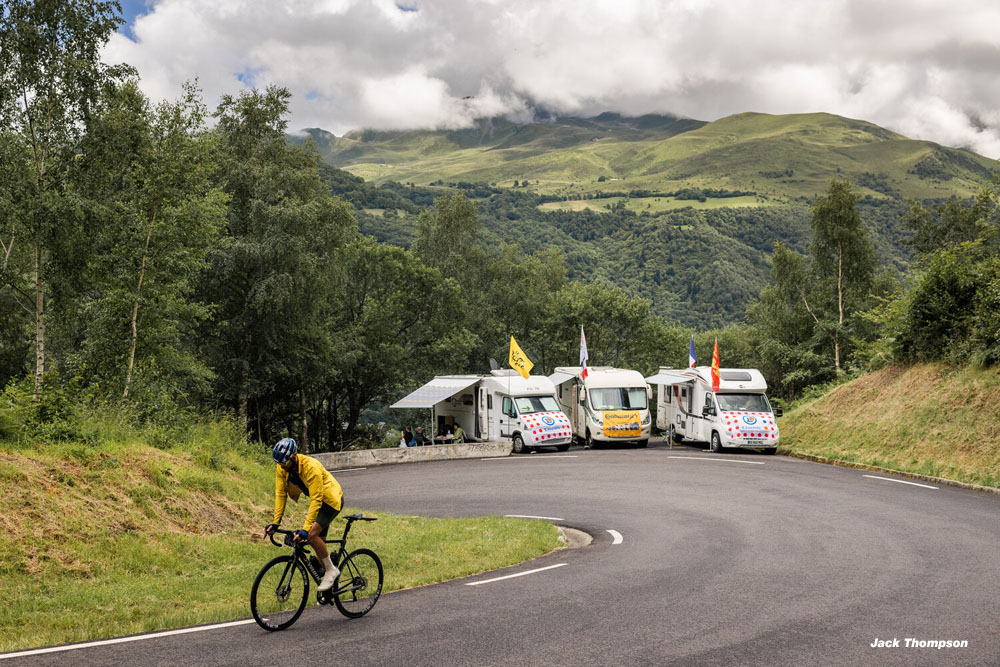 The suffering continues as the kilometers unfold and by 1600 kms he has reached A Dark Place. Judging from his previous ultra rides he knows that there will be highs and lows on a trip, but in an emotional outburst he admits that his previous life had taken him to much darker places than Mont Ventoux. Reaching a low point on the ride, he believes that he would not have been able to continue if he had done it three years before but now had the strength needed to go forward. 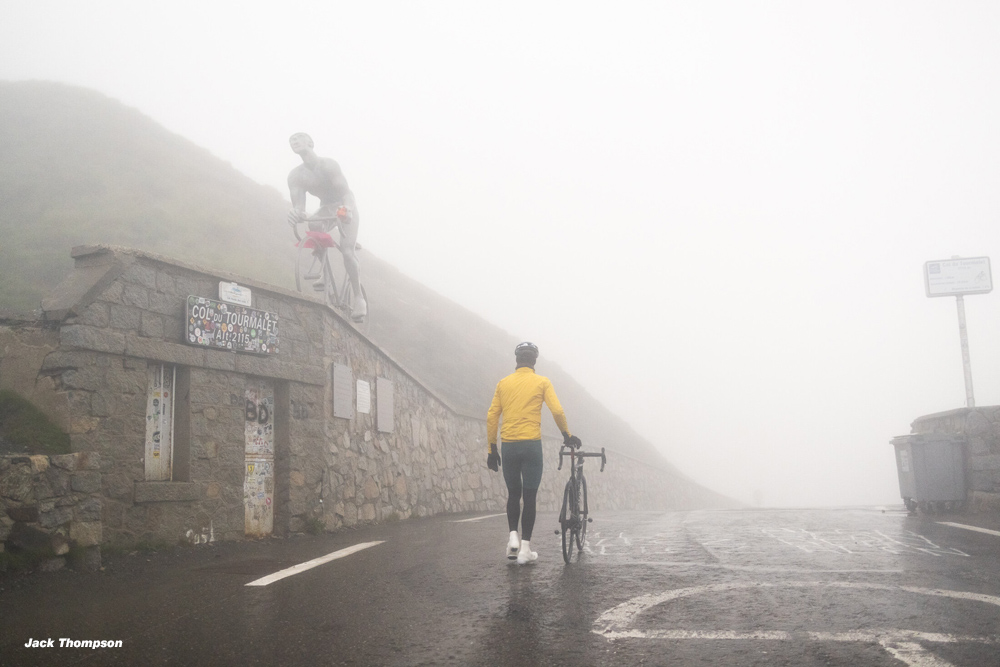 Of course, it is always darkest before the dawn, as they say. “The Amazing Chase” takes a very different tone when he catches the peloton on Day 7, after riding 2,468 kms, meeting the pro circus in Andorra. He calls it something wonderful, a secret passage as he rides through, and suddenly it is as if we are going downhill with a tailwind with him. A surprising moment is his climbing the Tourmalet in the rain and darkness, something most of us would find depressing, but he has reached a flow state and just cruises up a climb legendary as “the Terrible Mountain.” 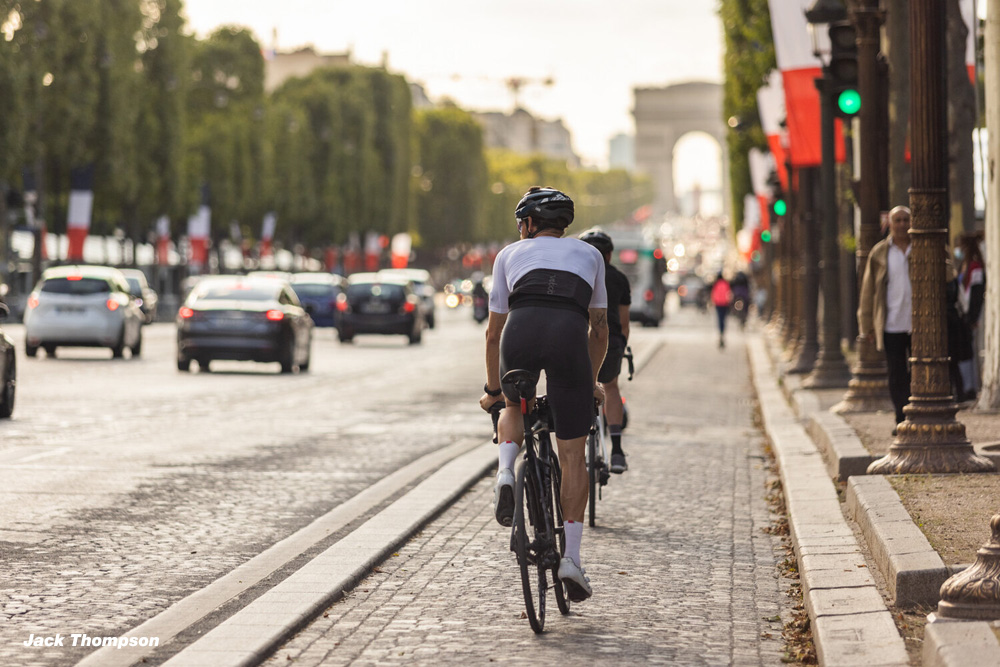 This is a very hard ride yet as he approaches the end, Thompson does not really want it to end but every adventure needs closure. There is a celebration with champagne in Paris…and three days later the Tour de France officially arrived. 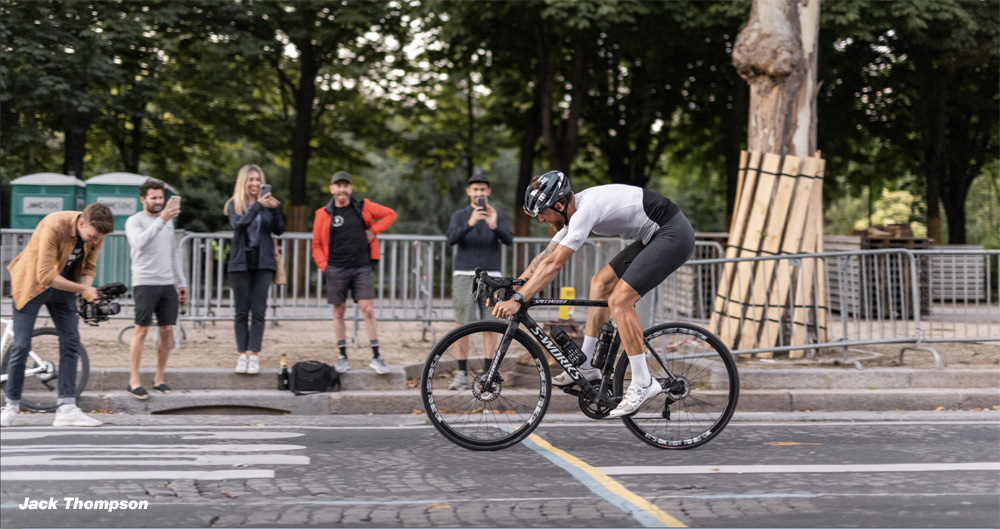 Not all of us think riding the Tourmalet in the dark and wet would be a fun thing to do, but watching “the Amazing Chase” makes one realize that adventure can take many forms, over distance and time. Thanks to our modern world of social media, you can enjoy watching Jack Thompson suffer and triumph in a nicely done 33 minute video, via the Wahoo Fitness YouTube channel, which premiered on September 1. As well, details of each day can be found on Jack’s own website.

In addition, racing cyclist Ian Boswell interviewed Jack Thompson about “the Amazing Chase” on his podcast, “Breakfast with Boz:” 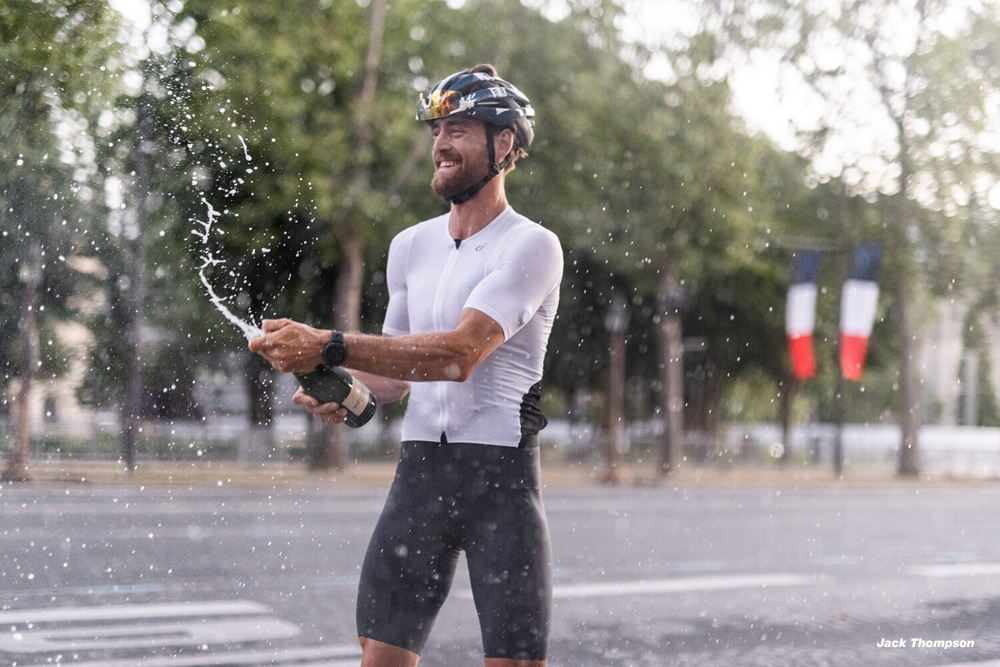