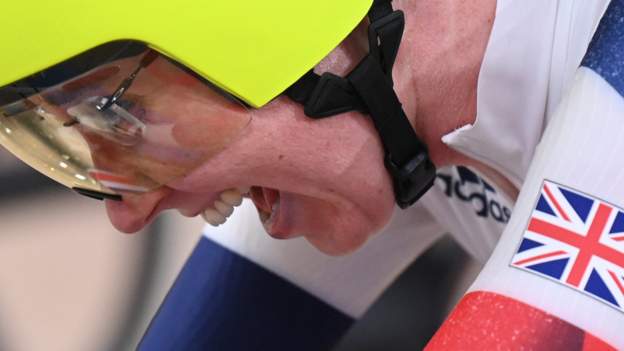 Britain’s Olympic gold medallist Katie Archibald doesn’t need to get pumped up for the Track Cycling World Championships – just don’t try to ask her something when her headphones are on.

Archibald, 27, aims to continue thriving amid a fierce schedule post-Tokyo 2020.

She will take on at least three events at the championships in Roubaix, France – to be shown live across the BBC – following an Olympics where she won gold and silver, and days after she won three European titles.

“One emotion is to not be too overwhelmed,” she says of her feelings when racing. “It’s hard to switch off.”

One way that Archibald gets herself into the zone is through music. So what sort of tunes prepare her to show the furious energy she needs to succeed on the track?

“I don’t want to be smashing my head in,” she said. “I want something to bring my heart rate down. I’m nervous enough as it is!

“It differs from competition to competition, but maybe a Laura Marling album or something.

“You have to have a big pair of headphones for racing so people know you don’t want to be spoken to. Still people sit down and chat. How can you not know?”

Although Archibald is ready to go, the gruelling recent Olympic programme means that the British squad heading for France is missing a few big names, such as Jason and Laura Kenny. But that gives opportunities for others to shine, including Ineos Grenadiers’ Ethan Hayter.

And when Archibald’s headphones finally come off, she hopes to better herself at the five-day event, which was moved from its original host location of Ashgabat, Turkmenistan, over restrictions linked to the coronavirus pandemic.

“There are new opportunities at these worlds, so I’m quite nervous and motivated,” she said.

“I’m doing the team pursuit, the madison and the omnium – with the option of the points race, which is still to be selected.

“A new challenge for the Tokyo Games was the madison and partnering with Laura [Kenny] for that [in which they won gold].

“The biggest stress I’ve always found are individual targets, so for me that would be the omnium at this World Championships. But I just took the European title, and I have been omnium world champion during the last Olympic cycle.”

Archibald, who has nine medals to her name at track world tournaments alone, believes the nervous energy she feels before races is all part of the game as she chases glory.

She said: “We often have conversations with team-mates about holding on to the fence at race start – I can see my arm shaking before the gun, but then it all kind of just floats away.

“I’ve certainly been the recipient of those unimaginable good days, where you can’t place a finger on why you can’t do it in training.

“I try to keep a conscious diary of when those moments are. Usually the gun goes and it’s like: ‘Oh my goodness, this is what I was built to do.’ It’s a feeling I chase all the time.”

But waking up on the morning of a big race and feeling good does not always lead to success.

“I’ve had that happen once and the race went terribly,” Archibald said. “It was for a madison. Me and Laura were on the turbo [trainer] that morning, and I was putting out this really high power like it’s nothing, and I thought: ‘That’s me activated.’

“I turned to Laura and said: ‘Listen, today’s going to go well, I feel good,’ and I used it all on the first 10 laps and blew to pieces!”

If she is on a good day, what does Archibald think about while busy seeing off the competition? More tunes, of course…