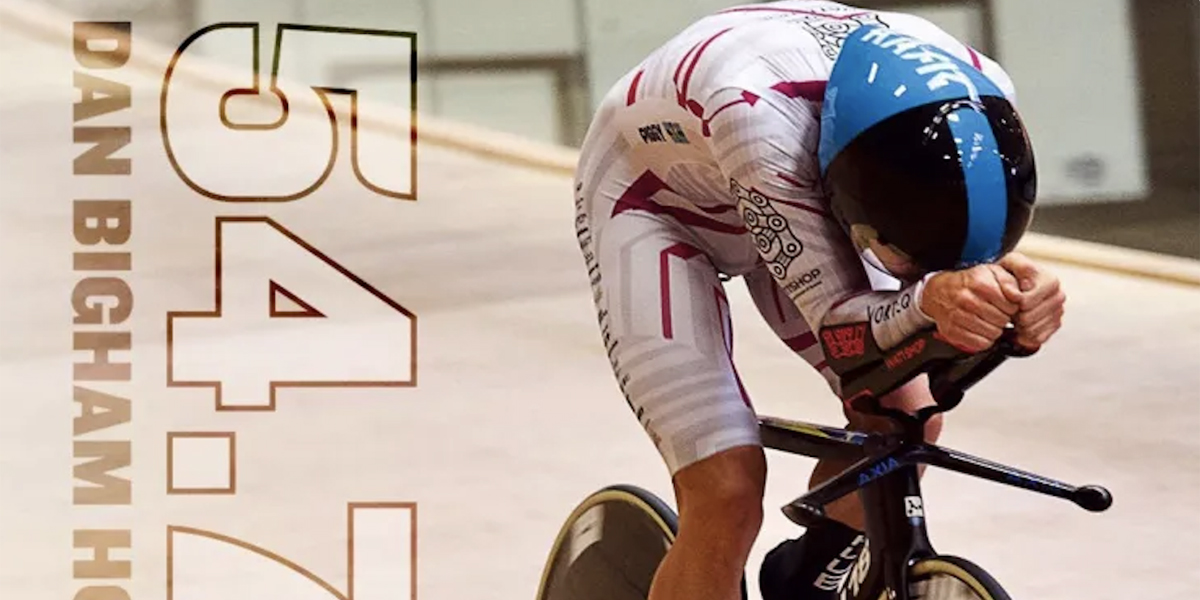 Rider Interview: The World Hour Record is again making the headlines with Alex Dowsett going for another attempt and talk of Filippo Ganna, setting good times in training. Jos Lowden broke the women’s World Hour Record, followed by her partner, Dan Bigham successfully taking the British record. Ed Hood caught up with Dan to hear all about it.

When Belgium’s Victor Campenaerts rode 55.089 kilometres in one hour on the Aguascalientes velodrome in Mexico in April 2019 it meant that Bradley Wiggins 54.526 kilometres set on the Lee Valley Olympic track in London in 2015 was no longer the World Hour Record. However, it was still the British Hour Record and looked set to stand the test of time, given Wiggins’ monumental talent.

Ribble Weldtite track and chrono man, multiple British Champion and aero guru, Dan Bigham [Ribble Weldtite] thought otherwise however; and on October 1st produced a stunning 54.723 kilometre ride on the boards of Switzerland’s Grenchen Velodrome. Not only is it a new British record, only Campenaerts, Tony Rominger and Chris Boardman have ridden further in one hour. Rominger’s ride was accomplished on a bike which doesn’t meet current record criteria and Boardman’s ride was in the now banned ‘Superman’ position as pioneered by Graeme Obree. It was double joy for Dan, with partner Joss Lowden having captured the women’s World Hour Record just the day previous.

We caught up with the 30 year-old as he prepared for his next challenge, the British Elite Time Trial Championship. 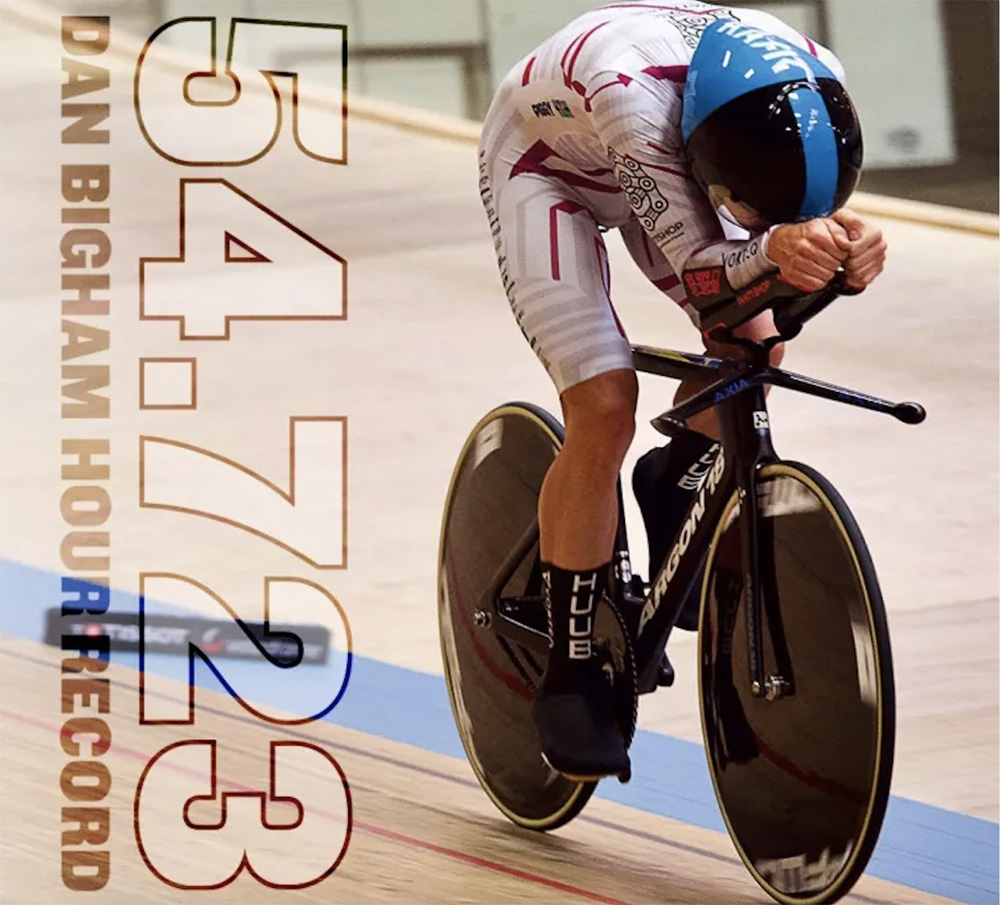 PEZ: Congratulations Dan and the $64,000 question first; is Campenaerts record achievable if you went to altitude?
Dan Bigham: Definitely. But altitude takes a lot of preparation and not just from physiological point of view, the cost implications are a major hurdle. You’ll have read that for me to organise joining and maintaining the UCi biological passport, which you must be on to have your ride recognised as the World record, would cost £8,000 – that’s the annual cost for me as an individual – but it’s not just that, there’s the travel, hotels, track hire and all the costs that go with it – commissars, time keepers, doping control. It’s a huge logistical proposition. I estimate that an attempt at altitude would cost in the order of £20,000 to £30,000 Sterling.

PEZ: On to the tech stuff, what was the gear ratio?
It was something I played around with before making the final choice of 64 x 14, that’s 124” in ‘old money,’ my average cadence was 95/96 rpm. We ran ½” pitch chain but a smaller pitch may be something for the future. 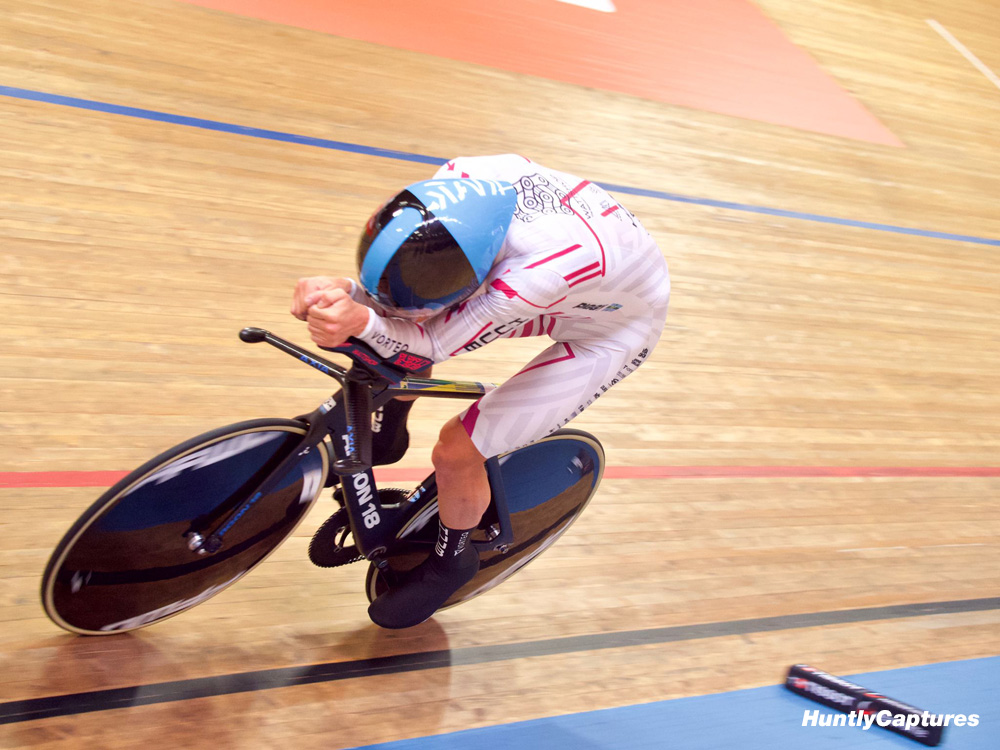 PEZ: Was it on the Argon 18 machine?
Yes, with Wattshop bars, Fast Forward discs, Vittoria tubulars, Speedplay pedals, I wore a Vorteq skinsuit with a KASK helmet.

PEZ: You’re an advocate of clincher tyre with their lower rolling resistance but you rode tubulars?
Without getting too ‘techie,’ whilst clinchers are certainly faster on the road, on the track you don’t have ‘damping losses’ because the surface is so smooth. As yet clinchers can’t handle the pressures that you inflate to on the track. That said, the German track team were on clinchers at the Tokyo Olympics and I think that as clincher development progresses, in the future it’s something we’ll see. 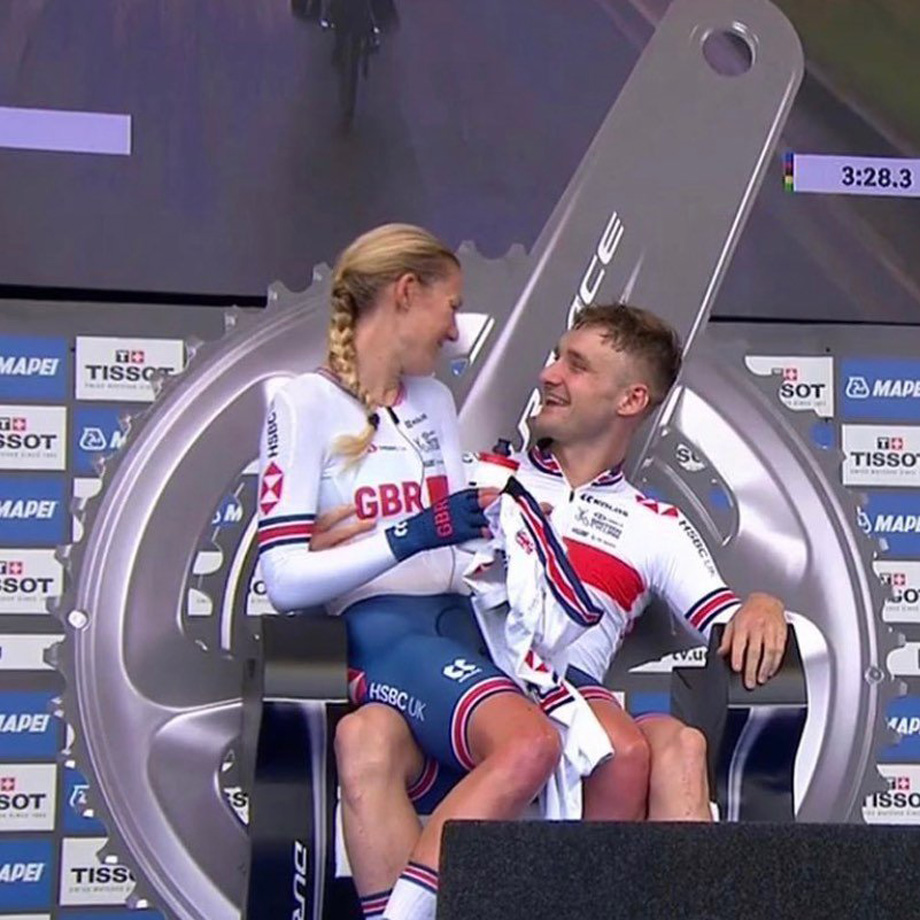 PEZ: Grenchen Velodrome?
It’s a great track and one which I’m familiar with from my team pursuiting with our KGF and HUUB track squads. But it’s not just the actual track, the staff there are great, with some velodromes it’s difficult to establish contact with the person who makes the decisions but at Grenchen they’re just so helpful. When I first contacted them about the attempt they were back to me within 24 hours with information on everything – commissars, time keeping, doping control, costs.

PEZ: I believe you’re not allowed to use power meter for the attempt?
You can carry one but you can’t look at it during the attempt, however you can look at the data retrospectively. I don’t think it’s important to have access to that data though, you have your schedule and your riding to it so seeing the power isn’t relevant – you know the speed you have to maintain. 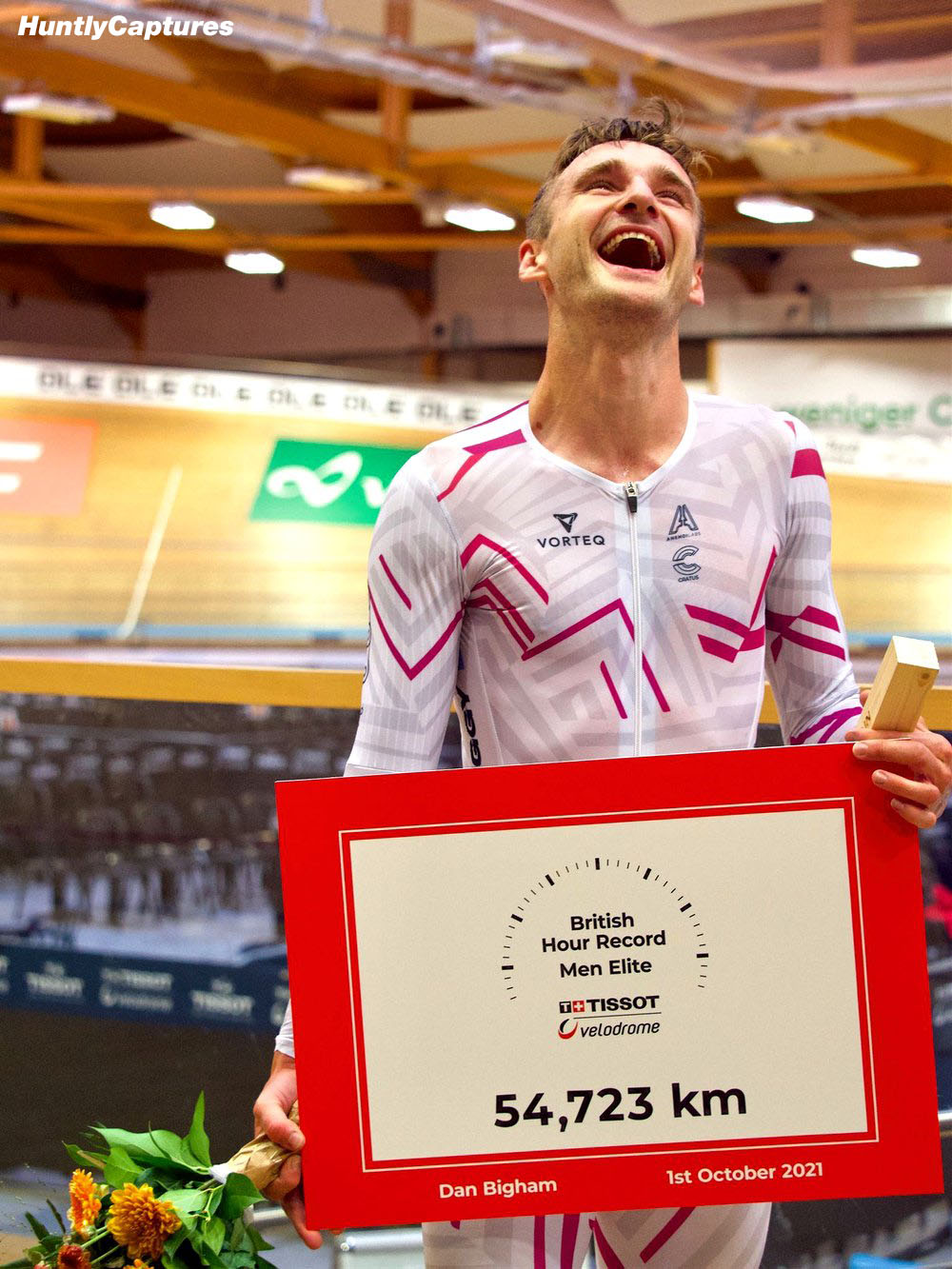 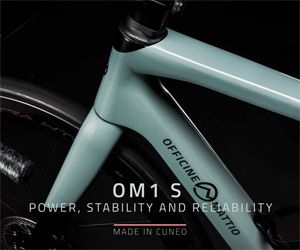 PEZ: Who was track side to give you the splits?
Mostly my dad but my brother and Joss were also there.

PEZ: With the benefit of hindsight, is there anything you would do differently with your preparation?
Nothing drastic, there were a few hiccups but it went well, I was at an altitude camp to prepare for the World Time Trial Championships, that was good focus and lead me nicely into the Hour attempt. 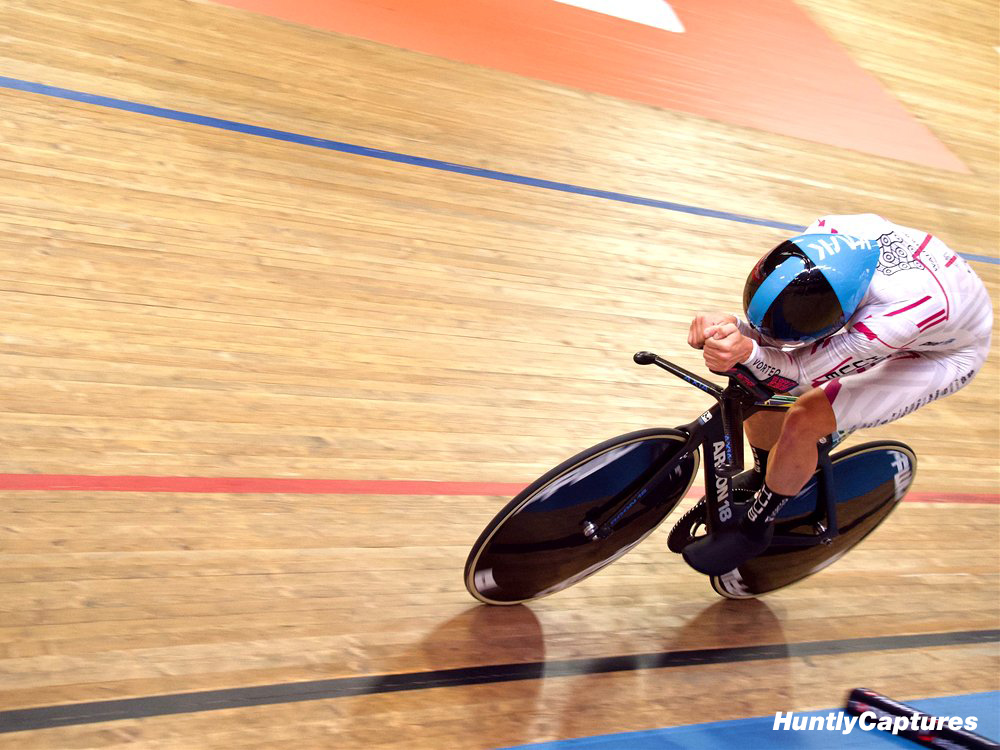 PEZ: I believe it’s easy to ‘over cook it’ early in the ride?
DB: Yes but my intention was always to go out in relaxed fashion; at half distance I was 20 seconds down on Wiggins having been 14 seconds down at 10 minutes in. But that was the way we planned it; with a strong finish.

PEZ: Any bad patches?
Not really but the last 15 minutes I was towards my limit and the last five minutes were hard, on the limit, trying to get it all out. 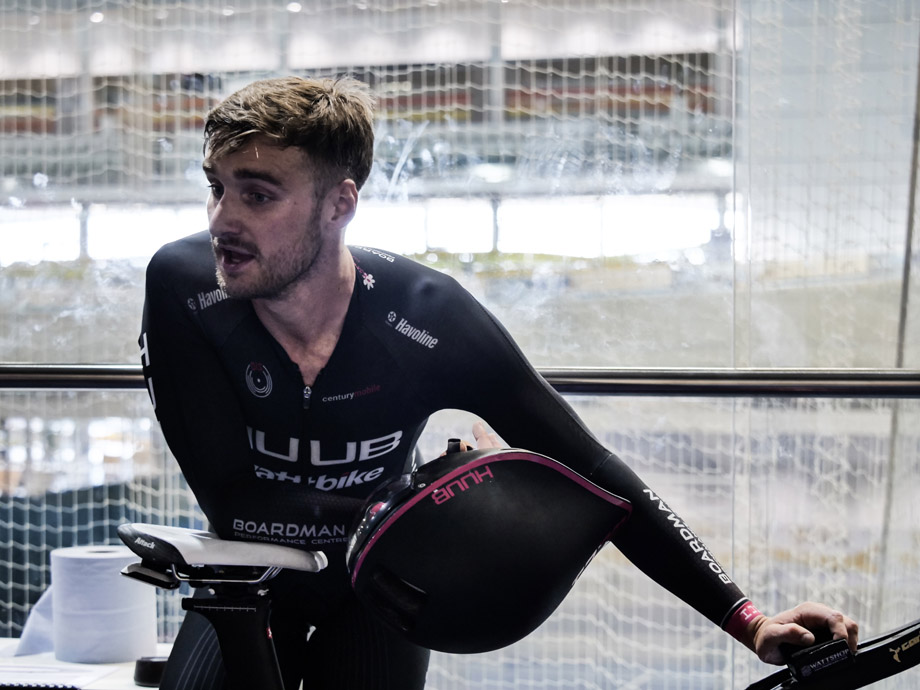 PEZ: Hindsight again – anything you’d do differently about execution of the ride?
I’d probably should have practiced more in training riding those first five minutes at relaxed pace, whilst it’s a nice opportunity to put time in the bank you’re not super-dialled and struggling a little with position, the gearing and holding your line – I actually hit a couple of sponges early in the ride.

PEZ: A ‘school boy’ question – what bit of you hurt most?
It sounds pretty random but my right hand and arm developed pins and needles which was pretty uncomfortable, by the end I couldn’t feel them. It was probably down to my keeping myself so tightly in the tuck? My legs weren’t too bad, manageable, I would say, I paced it well and whilst there was pain, it was the ‘good’ pain you get when you know you’re pushing on – and of course seeing that the record is ‘on’ generates good hormones. 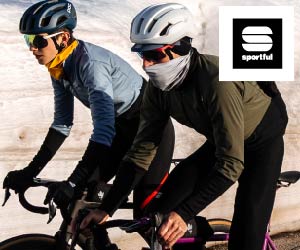 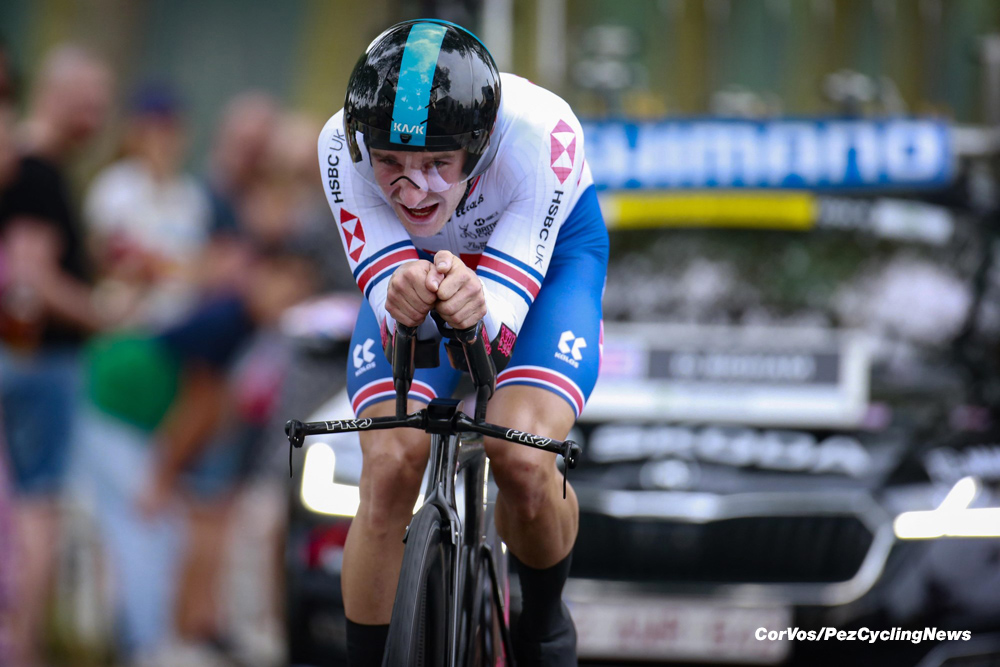 PEZ: Changing the subject, you were well inside the top 20 at the World Time Trial Championships – were you happy with that ride?
I was content, it wasn’t my best ride but it wasn’t horrible either, I was struggling a bit towards the back end of the race and would say that it was a good day but not one of my best.

PEZ: Next on the agenda?
I have the British Time Trial Championship on Thursday (Bigham was second in the British TT championships) at the village of Tealby in Lincolnshire with the Road Race Championships at Lincoln on the Sunday. My main focus is on the time trial, Jos and I are actually on our way there now to familiarise ourselves with the time trial circuit; the race is over three laps of 14.9 kilometres with a total distance of 44.7 kilometres. The road race is my last race of the year, after that I’ll put me feet up for a bit. 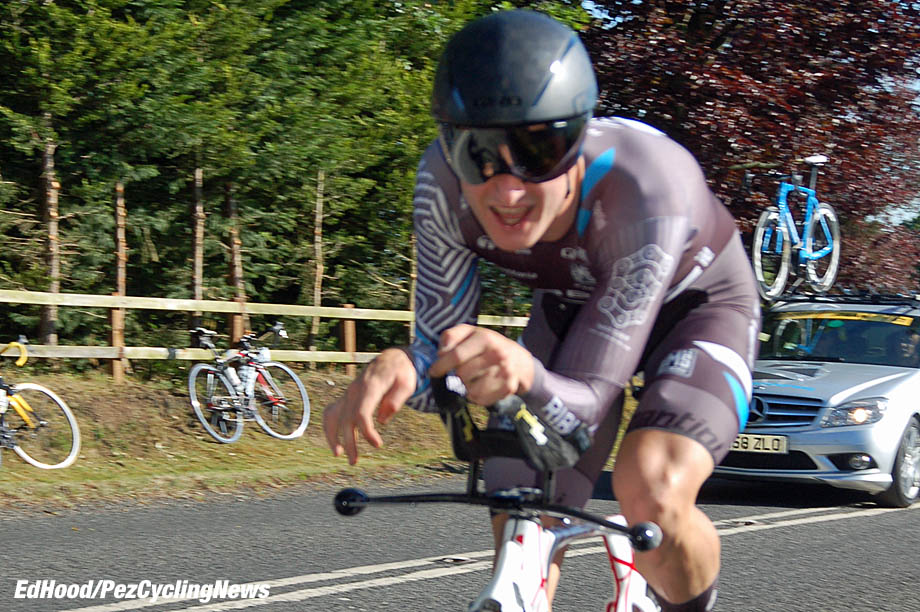 PEZ: What’s still on the Dan ‘to do’ list?
‘Watch this space,’ – but I’d like to do the Worlds time trial champs again, there’s the Commonwealth Games in Birmingham next year and of course, the Hour Record. . .

# With congratulations to Dan on his fine ride in Grenchen. #