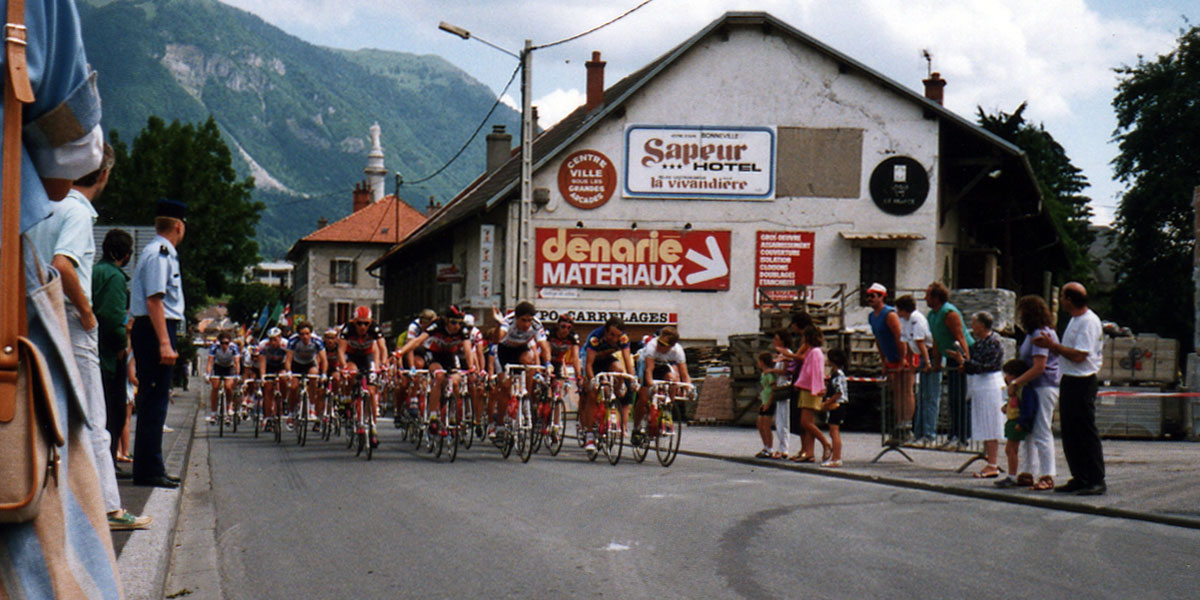 After 18 years of covering le Tour de France, we’ve amassed a huge archive of classically PEZ reportage, including what may the earliest piece of PEZ material ever recorded, a once lost piece of rare video of ace cycling commentator Phil Liggett actually interviewing me! Grab a coffee and let’s set the ‘Way-Back’ machine to 1990…

Although I’d stumbled my way into Paris to see Greg LeMond win the 1986 Tour, 1990 was my first dedicated trip to see and follow the race through the Alps – including a stage finish on Alpe d’Huez. After a couple nights in Paris, we set off for Geneva and our first date with Le Tour. We missed the stage finish, but were on the road early the next day for a lunch in Bonneville as the race rode past enroute to a stage finish above the town of Megeve on Mont Blanc. Rather chuffed with ourselves for actually making it to le Tour, our arrogance later got the best of us… 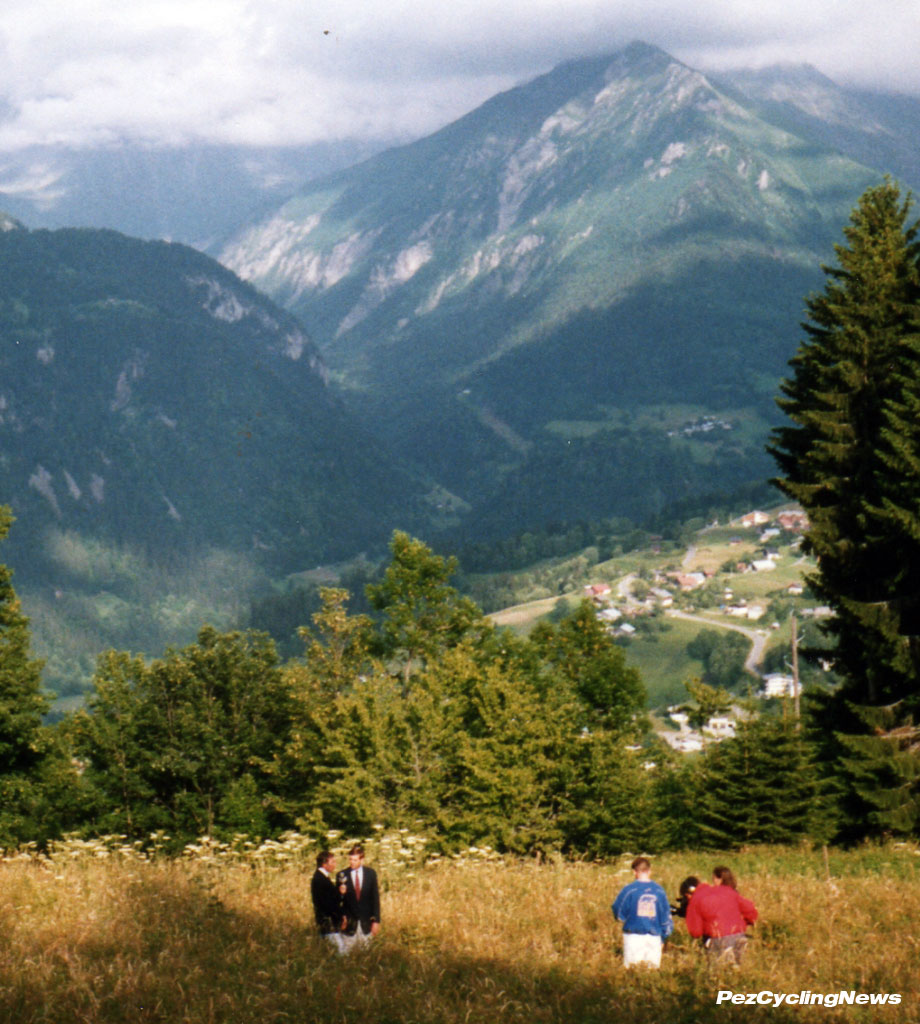 Phil records his end of stage wrap on the slopes of Mt. Blanc.

Arriving at our hotel on the finishing climb just as the tv helicopters approached, we (for a reason that still escapes me) decided to check the tele and see where the race was. Thinking we had plenty of time to catch the race, we took our time walking to the course.

Alas – we arrived in time to see the ‘l’autobus’ pedal by, but had missed the leaders… ! Undaunted, we climbed aboard our trusty steeds (we were big into mountain bikes back then) and rode to the top. 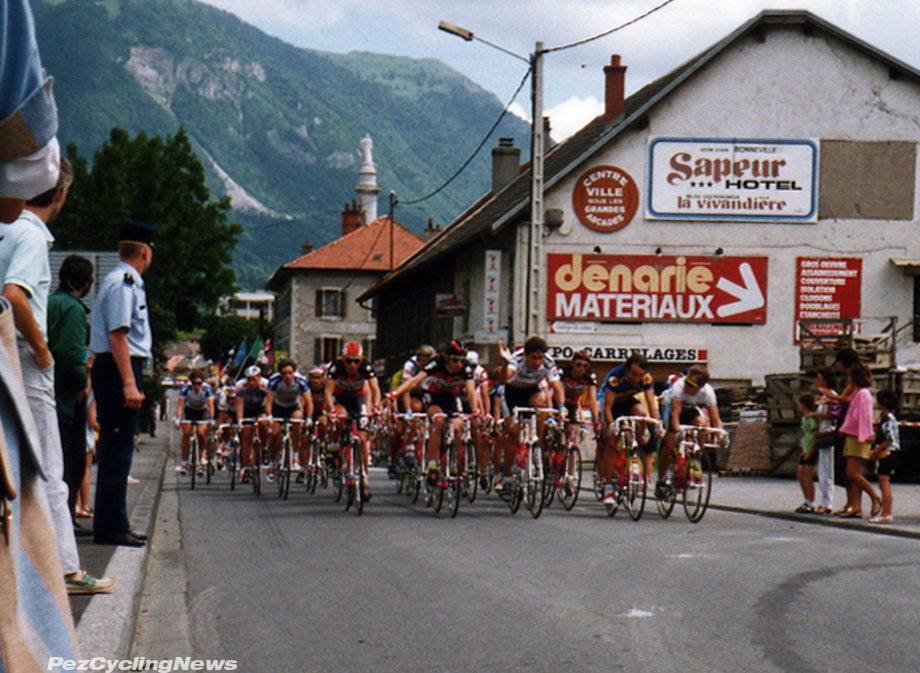 On our way down, we spied Phil Liggett and Sam Posey in a field, doing their end of day wrap for ABC television.  Aside from the camera crew, there was no one else around, so we sat and gawked for a while. Then it hit us… what if we asked Phil to help us play a little joke on our buddies back home?

We had our own video camera, and thought it would be rather amusing if Phil interviewed me as if I was in the race itself.

We waited patiently until they’d finished their work, then summoned the courage to approach “Mr. Liggett” and present our plan… 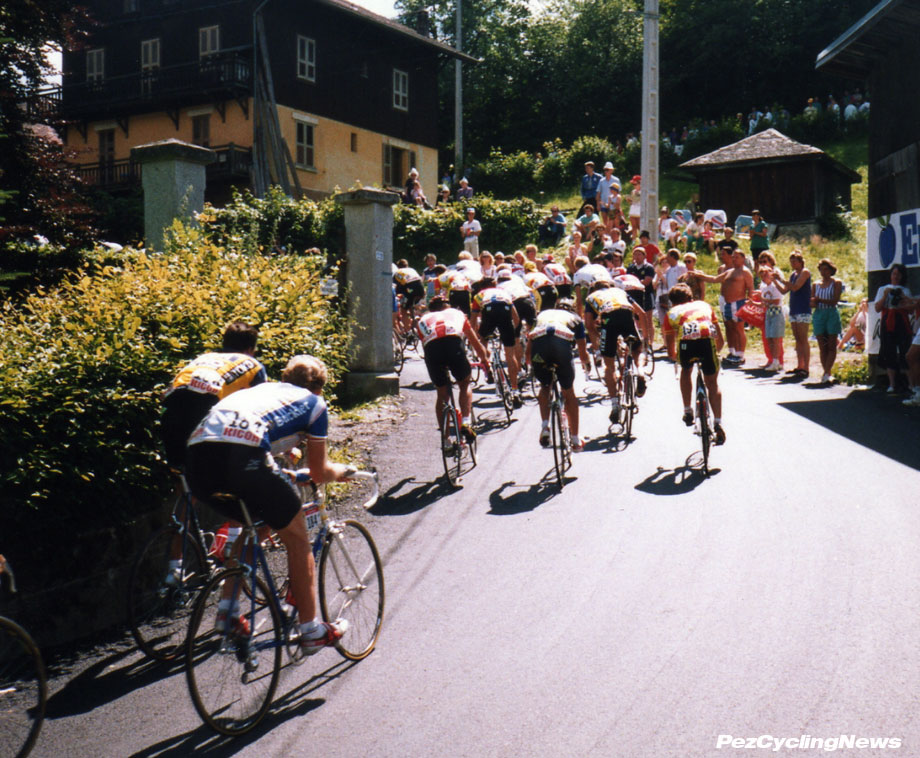 Much to our surprise, he bought in with nary a blink of an eye… We hit the ‘record’ button and history was made.

What stood out most for us, was how cool Phil was about the whole thing – dare I say he was even amused by our cunning plan? He played along graciously, had a good laugh with us about it, and even managed to take the piss outta me during our ‘interview’. 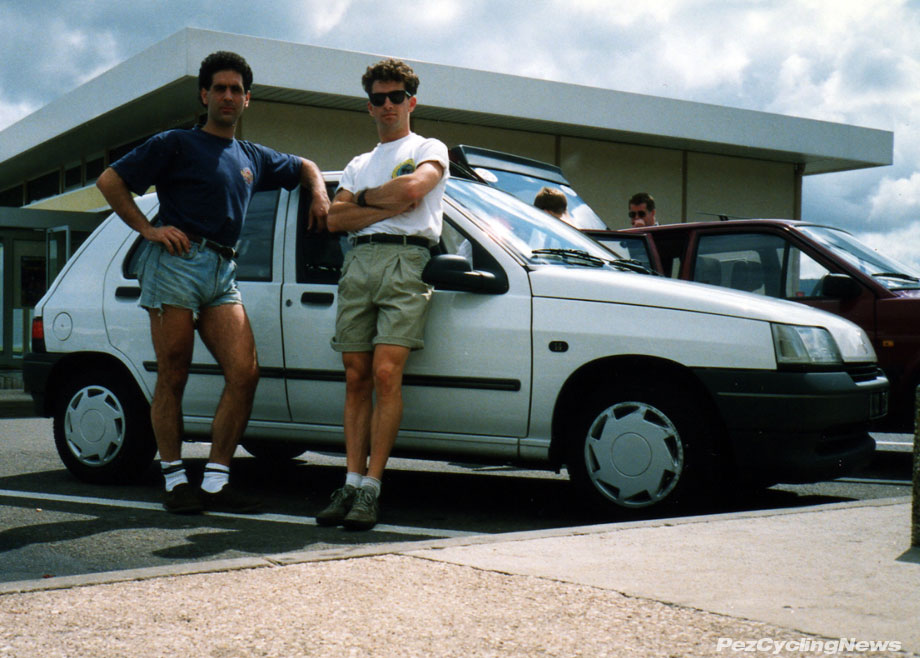 My ‘driver’ Eric and me at a truck stop between Paris and Geneva.

Years later, when I first interviewed Phil for PEZ, I recounted this tale… to which he said: “Of course I remember!”