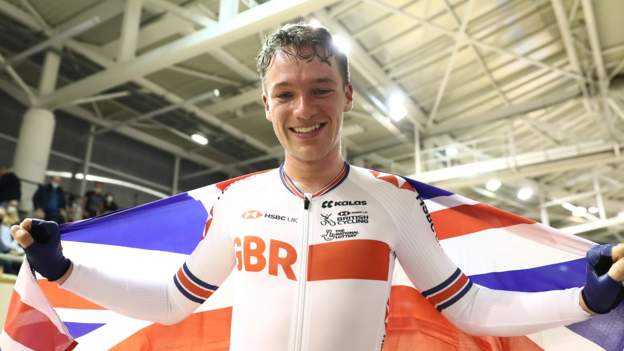 Britain’s Ethan Hayter put in a devastating performance in the points race to win omnium gold at the World Track Cycling Championships in France.

The 23-year-old had led by six points after wins in the scratch and tempo races and fourth in the elimination.

And he gained a lap on the rest of the field in the points race finale to finish on 180 – 56 points clear.

Earlier, Katie Archibald won her third medal of the week with madison bronze alongside Neah Evans.

The pair finished on 24 points, one ahead of Italy with Kirsten Wild and Amy Pieters of the Netherlands winning the event for the third time on 35 points and France’s Clara Copponi and Marie Le Net second on 30 points.

The success for Hayter, who also won silver in the madison at the Tokyo Olympics, saw him become the first British man since Ed Clancy in 2010 to win world omnium gold and completed a double for GB after Archibald triumphed in the women’s equivalent on Friday.

Silver went to New Zealand’s Aaron Gate on 124 with Italy’s Elia Viviani, the 2016 Olympic champion, back in third on 120.

Meanwhile, the Italian delegation had 20 bikes, including 15 track bikes, stolen overnight from their hotel.

“It was the work of well-organised professionals,” said the head of the Italian delegation, Roberto Amadio.

“We knew the difficulty, from this point of view, of the trip and that’s why we chose to stay in a hotel with a private and controlled parking lot but obviously it did not prevent the actions of these people.”

Each of the bikes was said to be worth £8,460 (10,000 euros) but competition organisers said that all the racers who lost bikes had already finished their campaign at the event.